It was only a small flock of about six birds.  They flew toward us in a landing approach as we photographed the endangered Ae’o (Hawaiian Stilt) in Kawai’ele Waterbird Sanctuary in the evening.  They definitely caught our attention.  They were Nēnēs, also known as Hawaiian Geese.  The Nēnē is Hawaii’s state bird.  It, too, is listed as endangered.  And, what they came to eat on the marshy sanctuary was another endangered species, a plant, the sticky flatsedge, known in Hawaii as the Pu`uka`a.  This federally listed endangered species is endemic to Hawaii and was once found on all the islands but is now believed to exist only on Oahu and Kauai. In the wild it is found in wetter conditions like pond margins or seasonal marshes so this sanctuary is the perfect place for it to flourish and to nourish the Nēnēs. 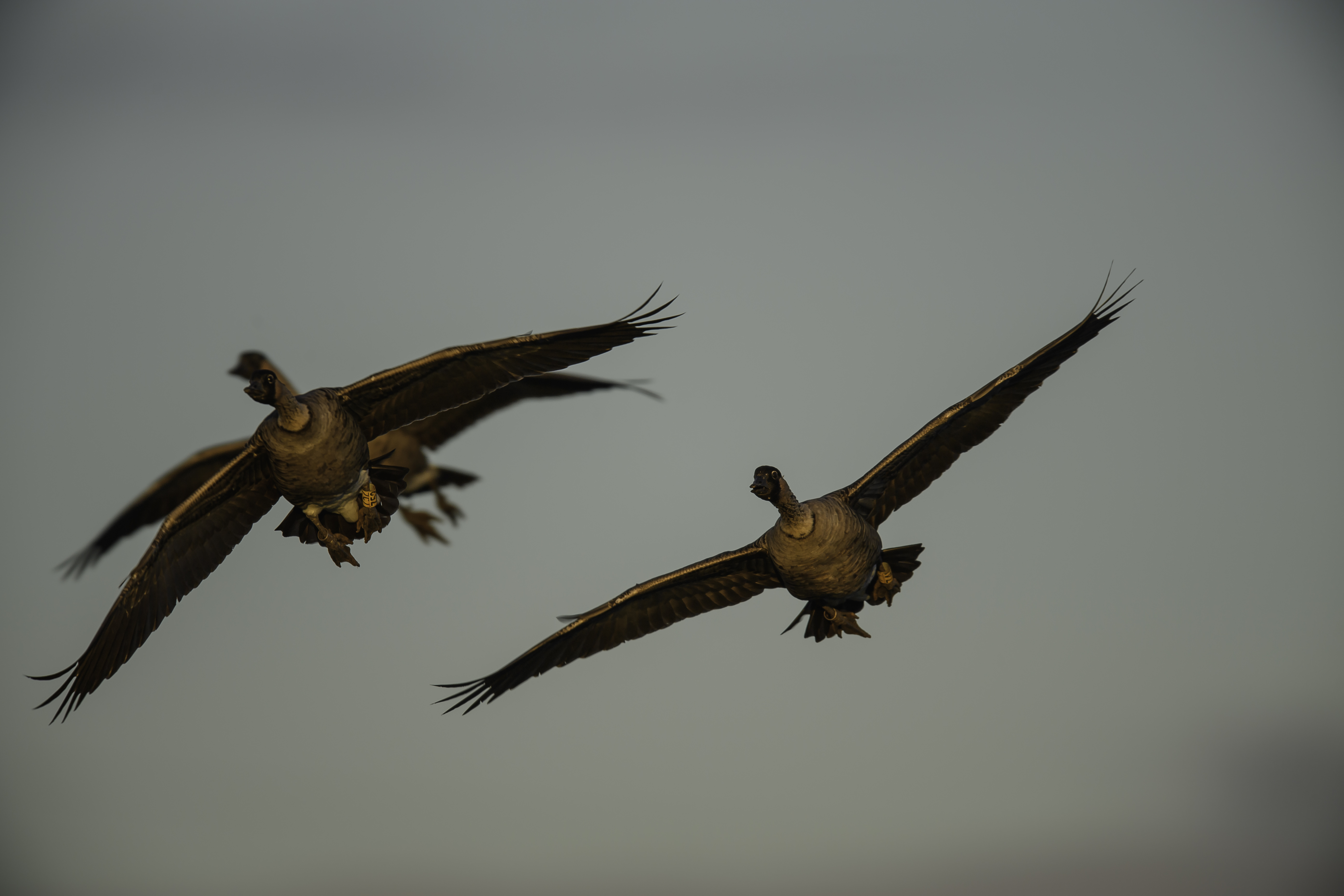 These Nēnēs are tagged and the numbered bands on their legs are clearly visible as they flew overhead toward the marshy sandbar to feed on the  Pu`uka`a late in the day. 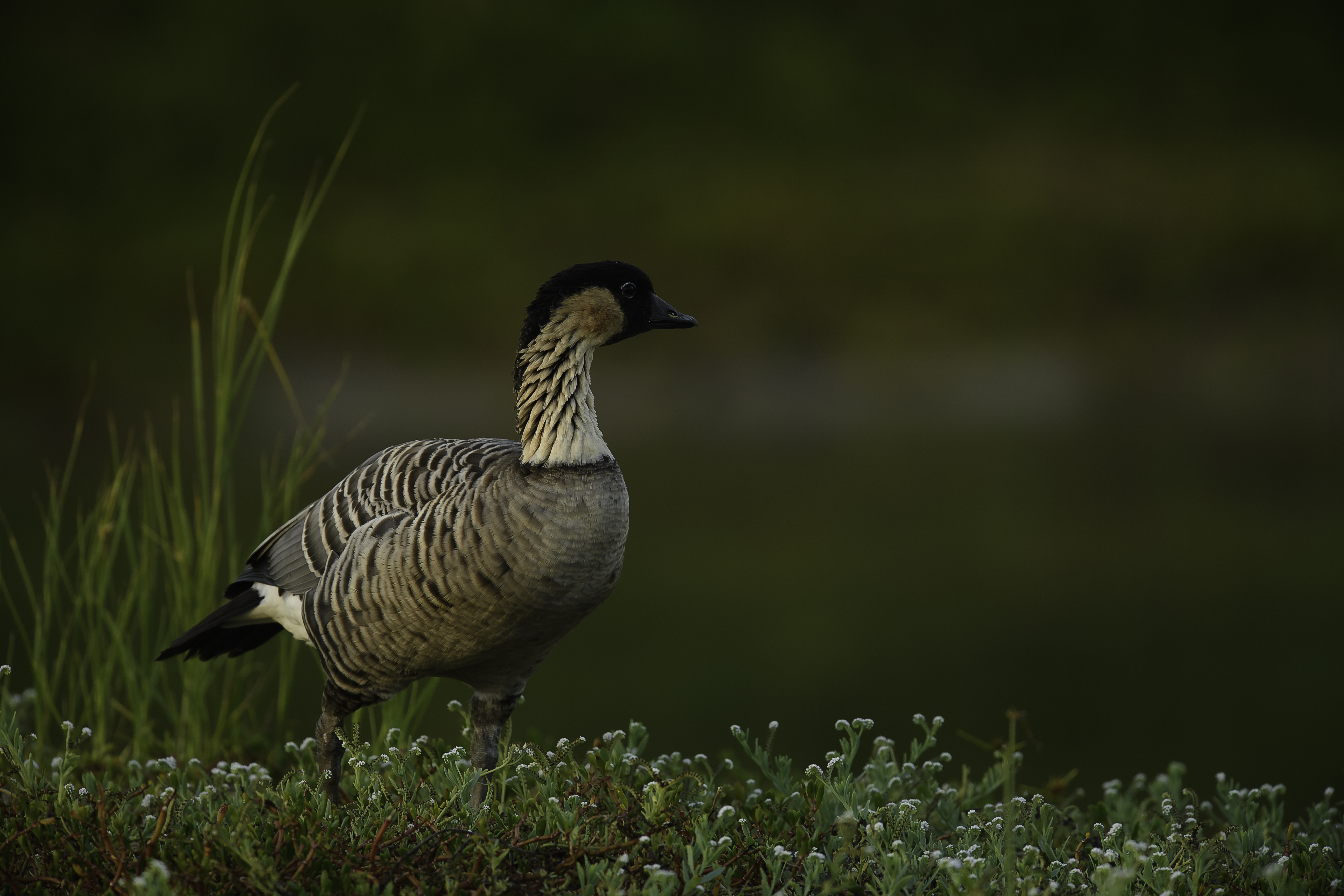 The Nēnēs were hungry when the landed on the edge of the pond.  This Nēnē seems to be searching for something.  Could it be the brownish flowers of the Pu`uka`a? 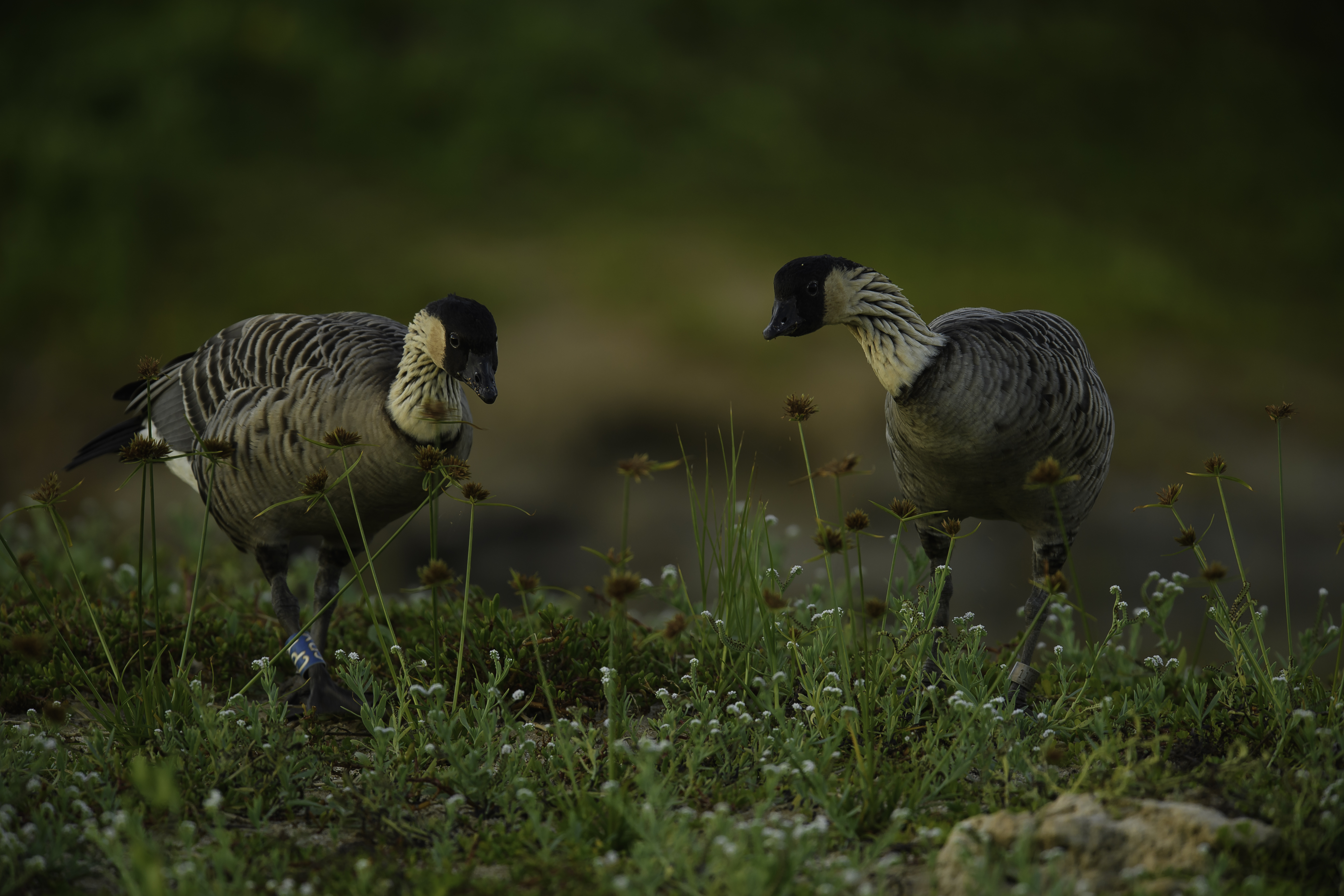 They espied the Pu`uka`a.  They looked it over. 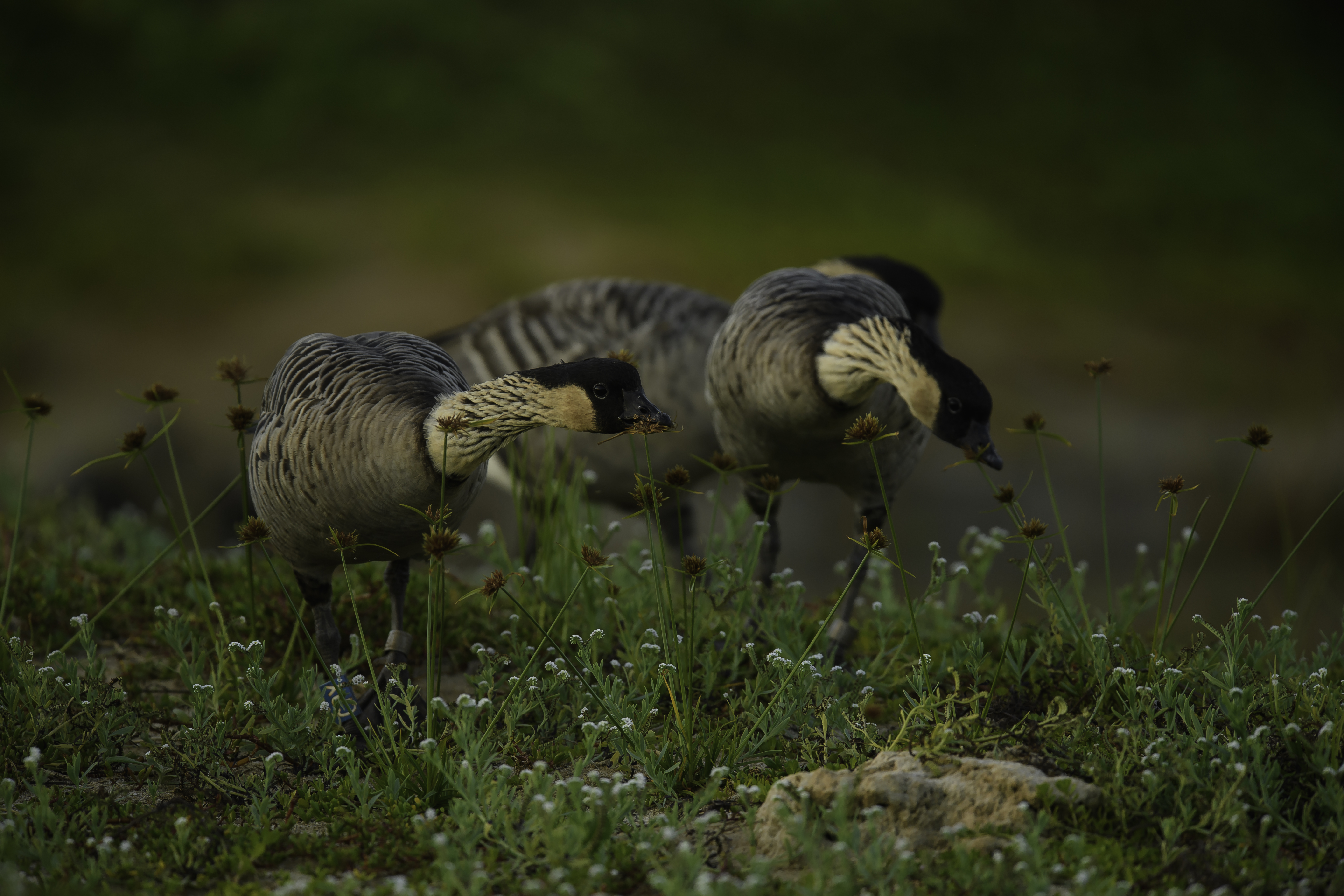 They sampled a few clumps.  Then began to gobble it up, their beaks covered with tiny shreds from the flowers. 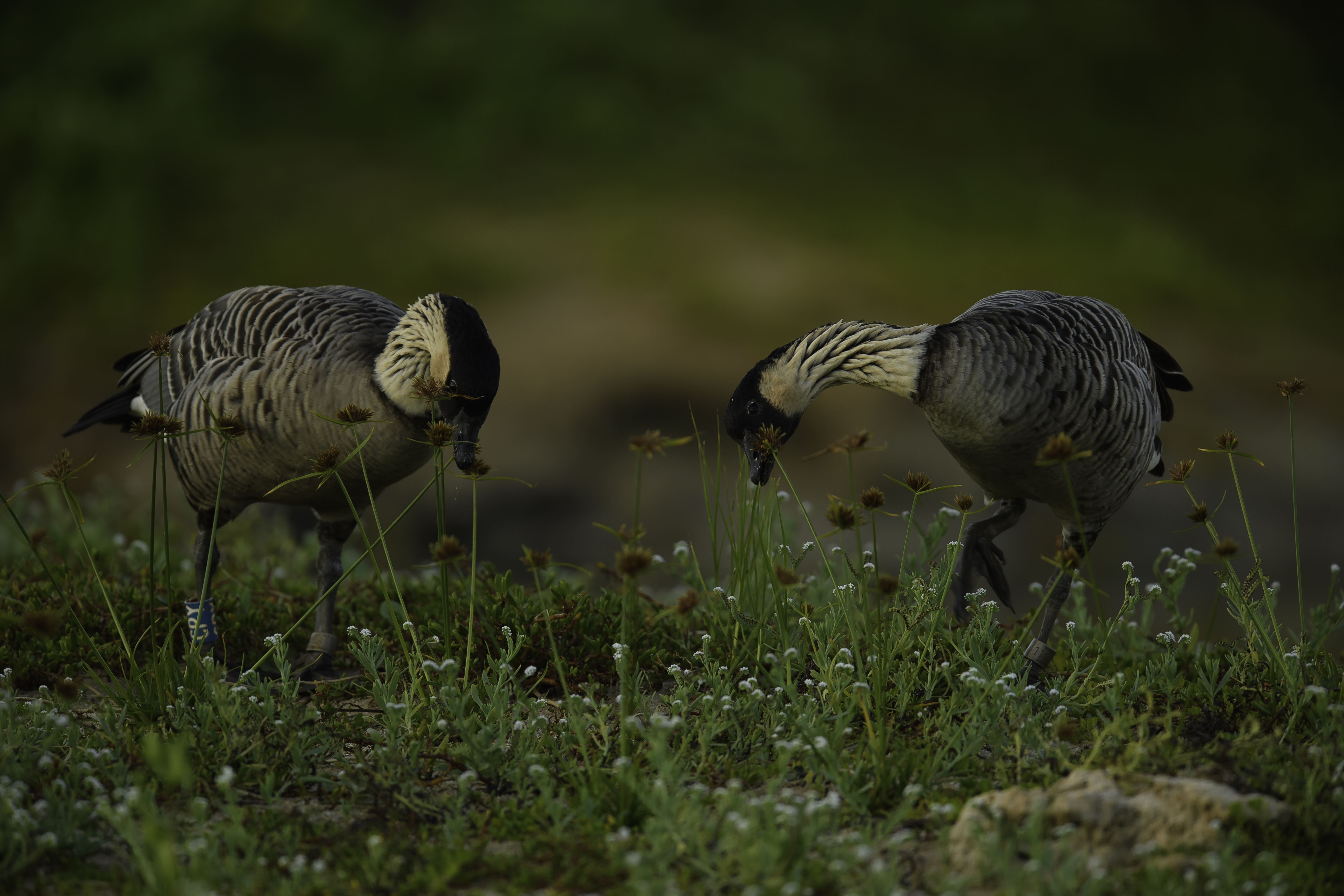 Life is good here at the Kawai’ele Waterbird Sanctuary for both the Nēnē and the Pu`uka`a.   At the time I took these photographs, I didn’t know what they were eating.  I was able to identify it as Pu`uka`a once I returned home.  What we witnessed that evening as they consumed their evening meal, was a powerful reminder of the fragility of nature and the need for sanctuaries like this one that offer hope and that make beneficial contributions to help what we have put in danger.