Wednesday afternoon and again Thursday morning we made the 90 minute drive from the east side of Kaua’i where we stayed, and followed the winding road with its countless hairpin turns to the west side of the island and up to Kalalau Lookout at an elevation of 4000 feet.   The lookout is above the Na Pali coastline with its stunning views of the rugged mountains and water below.  We were not there for the views, though.  We were seeking Hawaii’s endemic red honeycreepers that despite their bright color are not easy to find.

The grassy lookout area is surrounded by the ʻŌhiʻa (Metrosideros polymorpha) an evergreen tree with brilliant red flower tufts that feature stamens covered with nectar.  It is one of the most common native plants throughout Hawaii.  According to Cornell Laboratory of Ornithology, the dark red-flowered ʻŌhiʻa is the primary food source for the two red honeycreepers that we sought, the I’iwi and the Apapane.  We never saw an I’iwi which is endangered but we had lots of sightings of the Apapane.  The problem was photographing an Apapane with an uncluttered background, having it close enough, and out in the open.

The first afternoon, we spent more than an hour watching and waiting with little success.  Moose recommended that instead of chasing the bird from tree to tree, we should stake out a promising cluster of the red flowers and wait.   After a while, we were able to determine their patterns and we were hopeful as they returned again and again.  Although several Apapane visited the trees and flowers I watched, it was always on the far side away from the camera where no photograph was possible.  We left without any successful photographs of the Apapane that afternoon.

Thursday morning, we returned to the Lookout.  What a difference a day makes.  The sunny skies and beautiful view was entirely obscured by thick fog.  We were periodically engulfed in clouds and our cameras and us misted by them.  Then it turned to rain.  This was the only day of the trip that I needed to wear my rain jacket although it rained on us every day.  Because out gear is all weather sealed, it is protected from all but the worst and we always carry a white towel to occasionally dab off the accumulated water from the camera and lens.  So, the rain did not deter us.  Moose’s philosophy is that as long as he can take the pummeling of the rain, so can the gear.  When he can no longer stand it, he calls it quits.    On Thursday, we spent almost two and a half hours watching for the elusive Apapane and alternately being drenched with raindrops.  We staked out specific clusters of flowers in the hopes that the bird would go to that cluster.  When it was spotted, someone called out the bird’s progress and position in the tree and which direction it was heading.   We were patient and persistent.  While our reward was not huge for the effort, I did get one useable photograph.  And, it is a reminder about how difficult it can be to find and photograph a specific subject.

This is the Apapane in its native habitat, at its preferred food source, the ʻŌhiʻa.    I used the SB5000 flash on a bracket not to change the exposure but to highlight the color of the bird.  Because of the mist and the rain, we had to be careful that the flash did not fill our photographs with specular highlights reflecting off the droplets.  I used the D5 with my 600mm lens and the 1.4x teleconverter and still needed high speed crop to get this photograph. 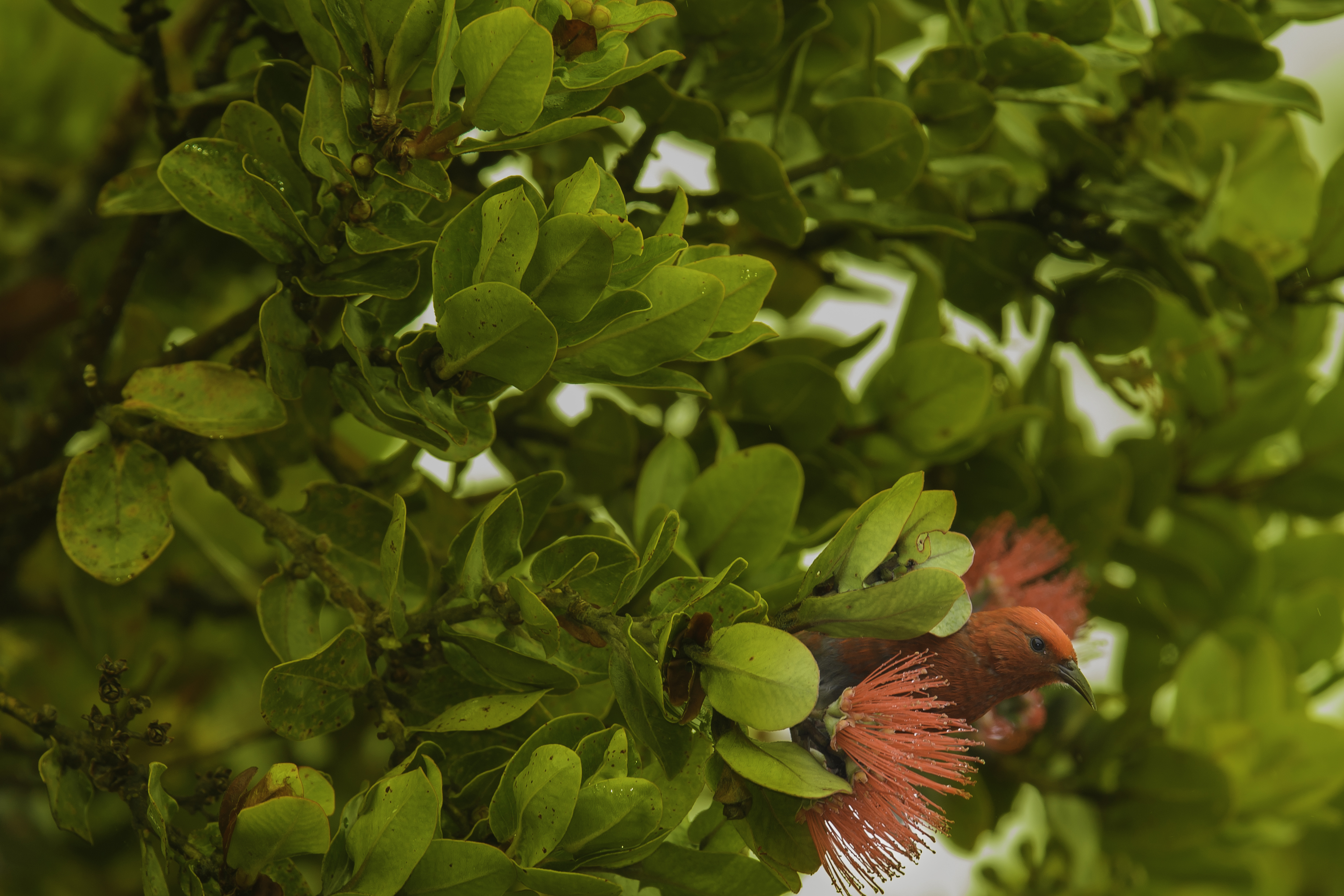