With Spring Creek Great Gray Owls remaining elusive, we changed our strategy Saturday evening to one used by many who were able to find Great Grays to photograph: serendipity—hoping that an owl will just suddenly appear.  While we continued to search for nest platforms and evidence of Great Grays, and the odds were good because we were in an area where Great Grays are known to nest, we trained our lenses on a Pygmy Nuthatch nest in the cavity of a Ponderosa Pine snag.   There were thunderheads in the area and it was sprinkling when we arrived at our destination late in the day but the rain eventually gave way to occasional sun as we photographed our subjects until the sun went down.

The Pygmy Nuthatch is a very small nuthatch that has a strong enough beak to drill into the trunks of dead trees to build its nest cavity.  Pairs usually hatch five to seven eggs in a clutch and the first few weeks are spent feeding the voracious nestlings an almost endless diet of bugs and spiders often gleaned from the needles of branches near its nest.   We watched in fascination as a pair of nuthatches performed what appeared to be a well choreographed dance with one bird landing at the edge of the nest hole with a grub or spider or centipede in its beak as the other peeked out, then exited often carrying what is called a fecal sac, excrement from the nestlings, removed by the adults to keep the nest site clean.   The most charming scenario was when the bird arriving with the food transferred its treasure to the waiting partner.  Moose suggested that was the photograph we might want to try to capture.

We were quite close to the nest and because the birds had nestlings to feed, they were not deterred from their responsibility by our presence.  The minimum focusing distance for my 600mm lens is 14.5 feet and I think we were just about at that limit.  The high speed crop function in my Nikon D5 got me even closer.   The four of us created kind of a scrum as we settled our tripods onto the meadow near the stump and jostled for position.  We had to scrunch together for optimal viewing distance and uncluttered background.  Because we were so close, just a few inches right or left made a big difference in what appeared in our viewfinders.  I got a little more tree trunk than some of the others who were able to get more of the muted green background.  And, of course  in my attempts to capture the various gestures of these birds, I struggled with focus, switching between manual and auto with some disastrous results.   Mastering the skill of manual focus with certain wildlife subjects is a challenge for me and one I must make myself practice more than I do.

I was a little trigger happy in anticipation of capturing a bird flying away from the nest cavity.  Sad to say, I took far too many shots of a nuthatch poking its head out of the hole and none of the desirable gesture of the food exchange at the nest cavity that were in focus.  Once again I was reminded I must be more discriminating when I press the shutter release.  The two photographs below are two of my favorites from the afternoon.  I like the first shot because this scenario could have resulted in the gesture I sought but the bird on the left never turned around to offer its prize to the other bird.  The final frame I got of this scene was the bird from the cavity exiting at high speed behind the other bird that never turned around.  The second photograph shows the bird (probably the same bird as in the first) with a still-wriggling creature in its beak.  The bug writhed through several frames before the bird disappeared into the nest and gave his prey to the nestlings. 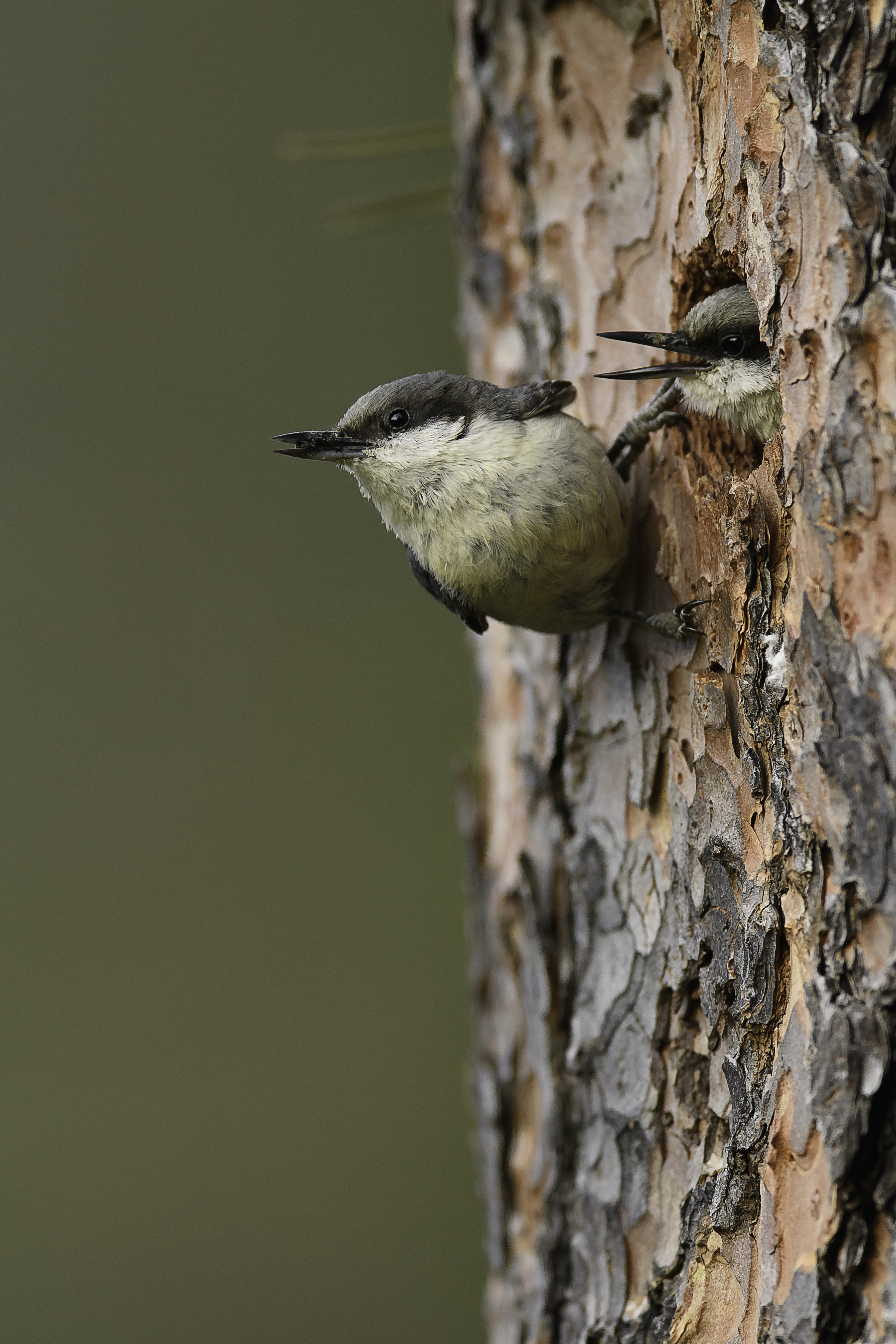 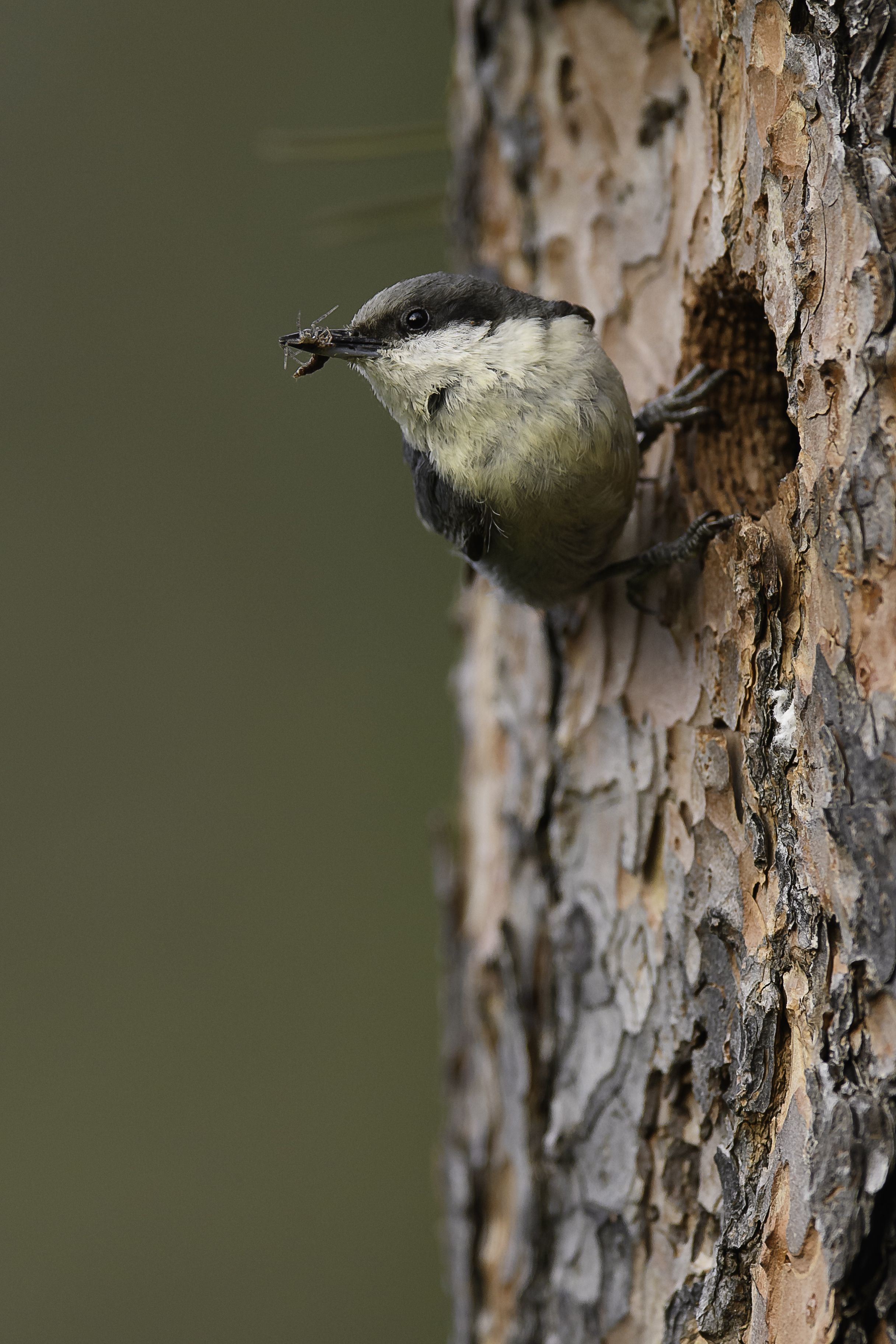