The coquinas are still covering the beach on Mustang Island.   On our morning walk Monday, we noticed the tide was lower than we’d ever seen it and coquinas were scattered zeverywhere.  This ruddy turnstone enjoyed the opportunity to gorge itself.

When I was about 10 my brother gave me a  book by Holling C. Holling called Pagoo.  Pagoo is an illustrated children’s book about life in a tide pool that focuses on hermit crabs, in particular a hermit crab named Pagoo.  As I recall, Pagoo was a name derived from the scientific name for a hermit crab which I don’t recall.  It is one of my all-time favorite books and I still have it.  Sunday morning, Susan and I walked on the beach and I mused that I’d never seen a hermit crab on the beach.  Just as Susan commented she thought they were mostly on the channel side, she stooped to pick up a moon shell from the sand.  When she turned it over, Pagoo emerged!   It’s the first hermit crab I’ve seen on the beach here.   If you look closely, you can see Pagoo’s beady black eyes looking at the camera as Susan holds him in her fingers.  After I took this photograph, Susan returned him to the surf.   After our encounter with the hermit crab, I told Susan about Pagoo the book.  Not only  had read it as a child, too, her personal copy was signed by the author!

Since my arrival in Port Aransas, TX Thursday afternoon, the weather has been cold, rainy, and extremely windy. Susan and I have enjoyed the comforts of a warm welcome by our good friends here so we didn’t feel the need to rush down to the beach, which would not have been quite as welcoming.  When the rain finally stopped Saturday afternoon, the wind died down to a tolerable 10MPH, and the sun emerged briefly, I changed clothes and headed to the beach for my first look at the Gulf of Mexico since my arrival.

There were a few die hard walkers, some people looking for shells, and one intrepid metal detector who mined the surf for lost coins and rings.   I saw none of the usual sanderlings or willets or ruddy turnstones sifting through the sand and the surf that I expected to see.  There were a few laughing gulls and royal terns flocked high above the surf on the sand facing into the wind, most standing on one leg.  I was surprised to see that the only activity in the surf was a couple of boat-tailed grackles that were wading and feeding in the surf.  I’ve never seen grackles on the beach, let alone in the surf feeding on clams.  Here is a series of shots that show the grackle grabbing the tiny coquina clam (some water drops flip off the grackle’s beak), crushing it (the nictitating membrane of his eye is visible as it crushes the clam and a piece of clam shell can be seen falling away), and finally, gobbling down the meat.

I’ve never photographed the grackles here although I’ve seen them for years on rooftops, lawns,  and power lines.  They have never seemed particularly interesting to me but to me their behavior today was unusual and I’m happy to have witnessed some interesting behavior that I wasn’t expecting to see. 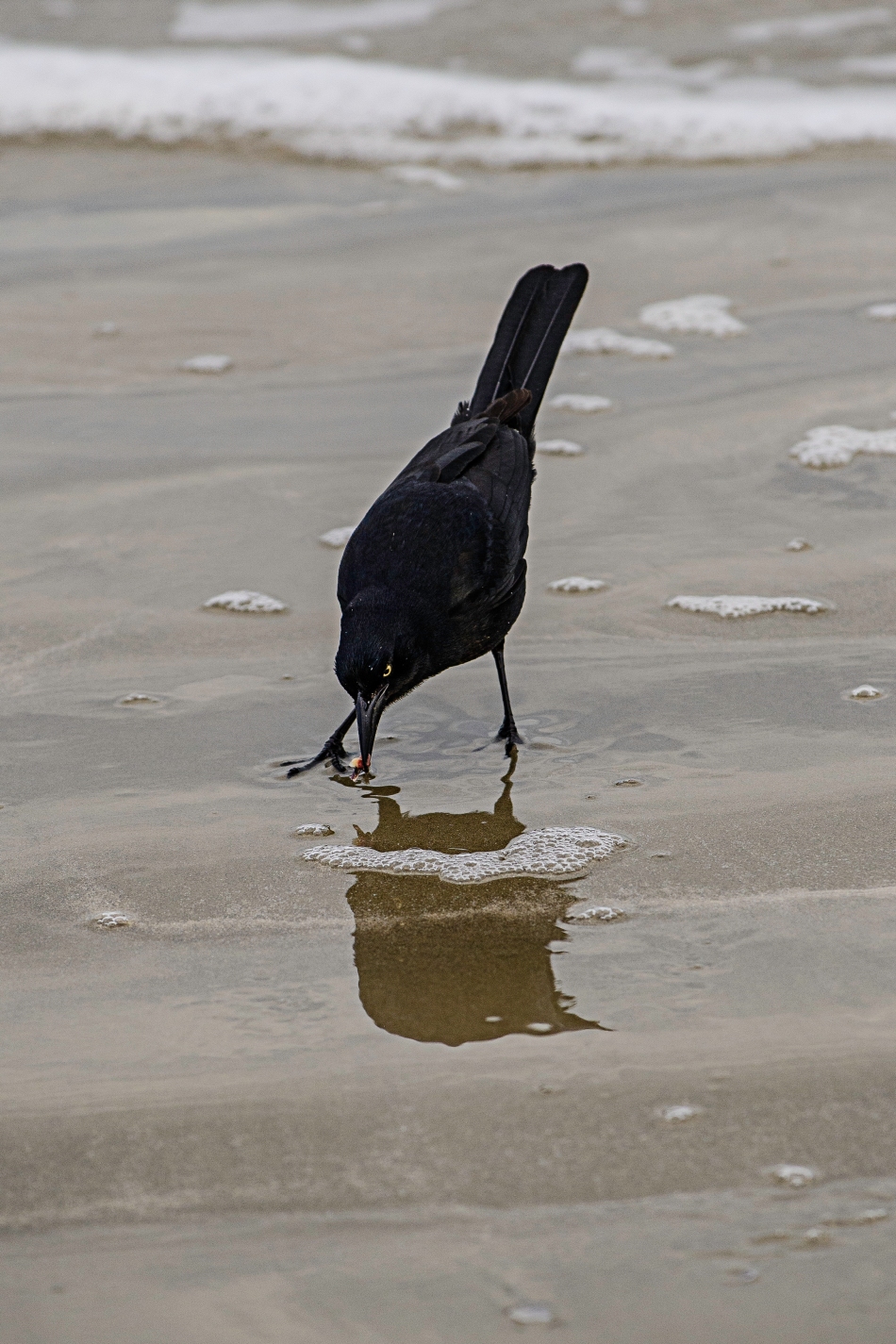 The other day, while out looking for something to photograph, I came across this (female?) American Kestrel perched atop a power pole.  I didn’t post it at the time I took it because it’s not a very interesting shot and too much of the “hand of man” is showing.  In fact, it dominates the shot and the kestrel appears to be almost insignificant in the photo.  The white wires lead the eye away from the bird and right out of the photograph.   I have become a  bit paranoid about photographs I take of wild birds that happen to perch on a manmade structure.  I have been criticized by judges at my camera club if they feel my wild bird photograph shows too much human intrusion.  As a result of that criticism,  I’m trying to be more critical of my shots.  This is an example of what not to photograph.  It’s also a reminder to me to carry a longer lens or, if I don’t have a long enough lens with me or can’t get closer,  I shouldn’t take the shot.

This little female bushtit was the only one who was brave enough to show herself when she and a few others arrived to bathe in the fountain but found me outside, lurking.  She came down to the water once, immediately returned to her branch, gave me a “high nine” (that’s how many extended wing feathers I can count) then flew off to join her shy buddies.  I can’t really tell if she has both wings raised.  Her body doesn’t look to be twisted enough for both wings to be on her right but her tail is a little askew and I think it’s odd for a bird to raise one wing unless it’s stretching.  Maybe she’s stretching?  She  immediately folded her wing(s?) after this shot but didn’t fly off. 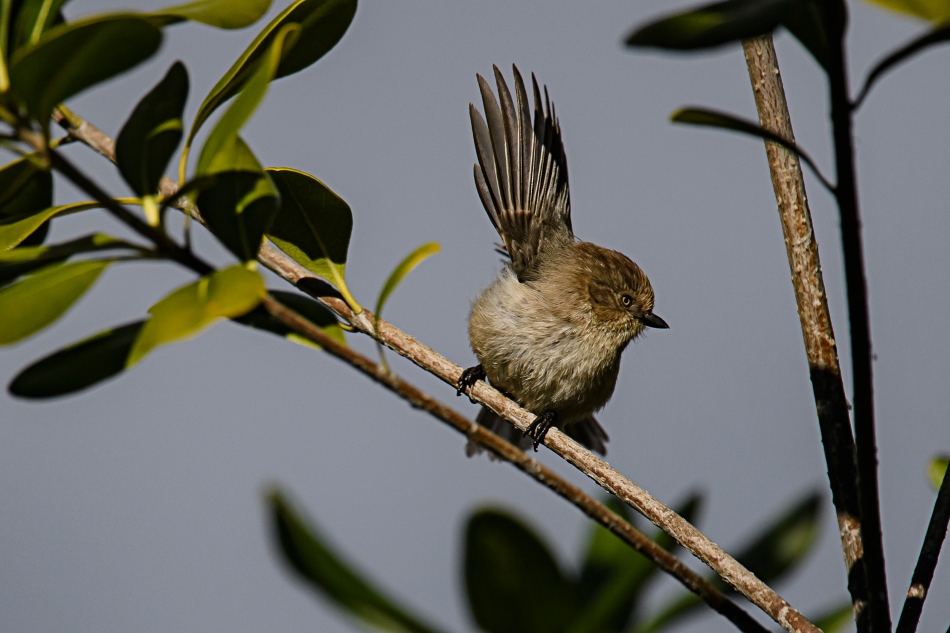 A couple of Greater Sandhill Cranes pick their way carefully across the frozen pond early in the morning.  They exhibit this leaning posture just before they take flight but I think this pair is being extra careful as lifting off the slippery ice is treacherous for them.

On Sunday morning, during a temporary respite from the storms, the skies cleared, the blustery winds lessened briefly, and the hummingbirds emerged to drink and bathe.  It never ceases to amaze me how enthusiastically they plunge again and again into the fountain’s bubble completely submerging their heads. 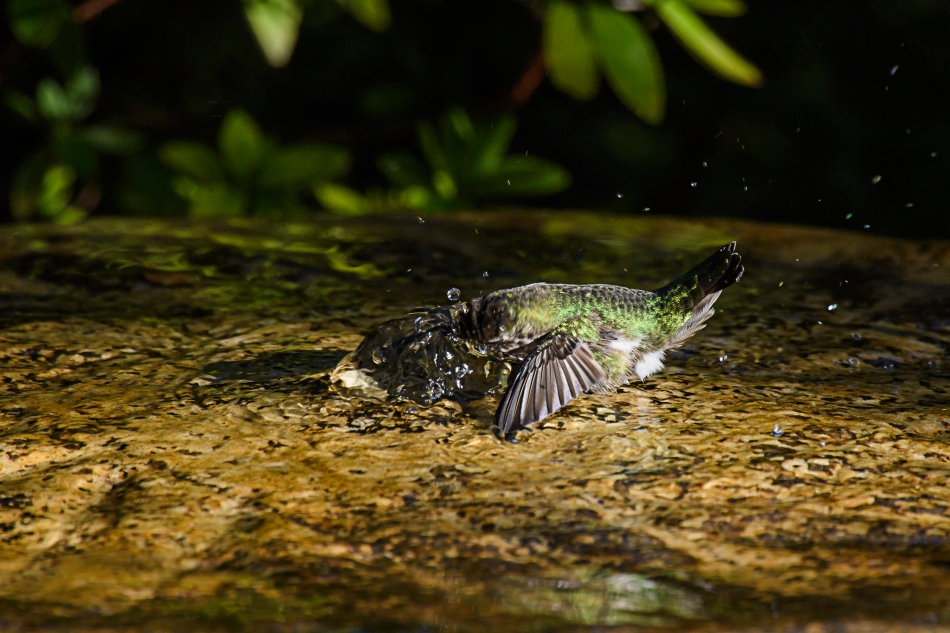 2017—Can A Duck Goose? And Other Zoomorphisms

They say bad luck comes in threes.  My recent trip to Oregon seemed to have bad luck written all over it.  I had a great time with my brother and sister-in-law but odd things happened.  The first bad luck to find me came shortly after I arrived in Bend.  I lost my Fitbit, a constant companion for several years.  When I went to REI to get a new one, I discovered that the Fitbit Zip has been discontinued.  The Zip clipped on.  All current Fitbits attach to wrists.  I won’t wear a wrist Fitbit so I have to find something else to track my steps.

The third, and I hope the final, bit of bad luck was my flight home late Wednesday afternoon.  The trip was in two segments, Bend to Portland and Portland to Sacramento.  The first leg was bumpy but not alarming.  The second leg was a roller coaster of a ride.  Several passengers were airsick and the flight was so unsteady that the flight attendants had to delay drink service, which by this time, everybody needed.  When the pilot finally allowed in-flight service to begin, the flight attendants rushed through as quickly as they could.  I enjoyed a complimentary craft beer from an Oregon micro-brewery as is the custom on Alaska Airlines but I couldn’t set it down.  It sloshed constantly and I was afraid it would dump in my lap if I set it on the tray.   As we bounced through the night skies, we could see the lights of the Sacramento area as the pilot announced our final descent to the airport.  It was storming outside and we were told that those who gate-checked their carryons would have to pick them up at baggage claim as it was too blustery and wet for claiming them on the tarmac.  After this announcement, we continued flying for quite a while and I started to wonder why we weren’t landing.  I couldn’t see the lights below any longer.    Finally, the pilot announced that it was too stormy for the airplane, a Bombardier Q400, to land safely.  Winds at the Sacramento International Airport were clocked at more than 55 knots, about 63M.P.H.  Consequently, we did not land in Sacramento that night.  I thought we might be diverted to San Jose or San Francisco and bussed back to Sacramento but, no.  We turned around and flew right back to Portland.  The return flight was just as unsettling as the flight to Sacramento but on the way back we didn’t have access to the single rest room which had to be closed due to a malfunction.  I spent the night in Portland and returned home Thursday afternoon on a blissfully calm and peaceful flight.

As the SuperShuttle van ferried me home from the airport, we drove along Elverta Rd., just east of Highway 99, a mile or two from the airport as the crow flies and we saw six or seven telephone poles that had snapped off at ground level during the previous night’s storm. They’d toppled into a flooded irrigation ditch alongside some rice fields.  What a shock to see them.  There’s no doubt in my mind that the pilot made the right decision to return us to Oregon.   I went back Friday afternoon and photographed them.  The airport is at the left in front of the trees barely visible near the horizon, and behind the vehicle in the photograph.

2017—Mallards On The Deschutes

I didn’t see many birds to photograph while I was in Bend, OR but when we walked around the Old Mill District one afternoon, there were lots of mallards swimming along the narrow channels of the Deschutes River that weren’t iced over and quite a few just standing on the icy edges of the water.  I took these shots from the Flag Bridge that spans the Deschutes. 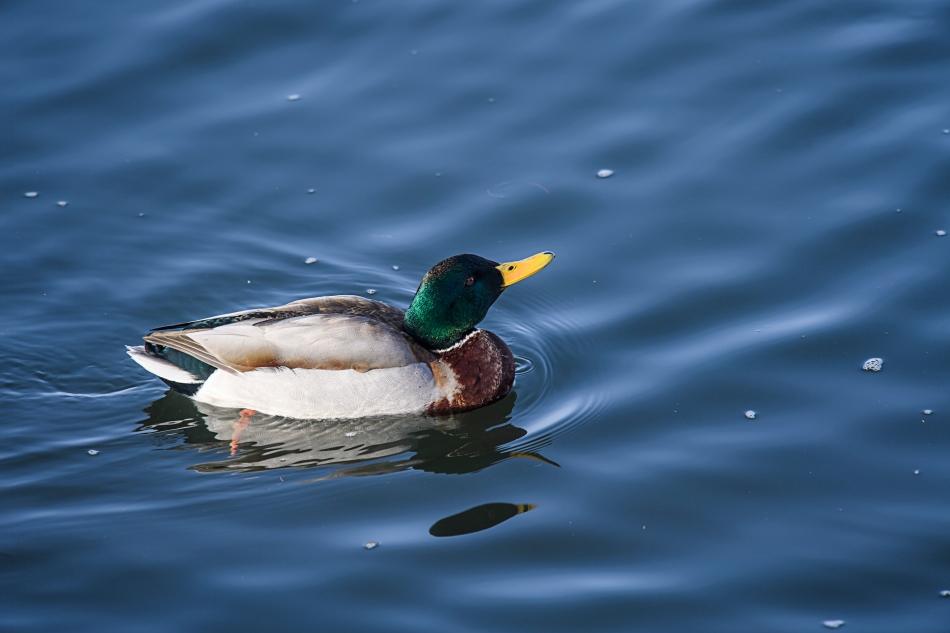