They say bad luck comes in threes.  My recent trip to Oregon seemed to have bad luck written all over it.  I had a great time with my brother and sister-in-law but odd things happened.  The first bad luck to find me came shortly after I arrived in Bend.  I lost my Fitbit, a constant companion for several years.  When I went to REI to get a new one, I discovered that the Fitbit Zip has been discontinued.  The Zip clipped on.  All current Fitbits attach to wrists.  I won’t wear a wrist Fitbit so I have to find something else to track my steps.

The third, and I hope the final, bit of bad luck was my flight home late Wednesday afternoon.  The trip was in two segments, Bend to Portland and Portland to Sacramento.  The first leg was bumpy but not alarming.  The second leg was a roller coaster of a ride.  Several passengers were airsick and the flight was so unsteady that the flight attendants had to delay drink service, which by this time, everybody needed.  When the pilot finally allowed in-flight service to begin, the flight attendants rushed through as quickly as they could.  I enjoyed a complimentary craft beer from an Oregon micro-brewery as is the custom on Alaska Airlines but I couldn’t set it down.  It sloshed constantly and I was afraid it would dump in my lap if I set it on the tray.   As we bounced through the night skies, we could see the lights of the Sacramento area as the pilot announced our final descent to the airport.  It was storming outside and we were told that those who gate-checked their carryons would have to pick them up at baggage claim as it was too blustery and wet for claiming them on the tarmac.  After this announcement, we continued flying for quite a while and I started to wonder why we weren’t landing.  I couldn’t see the lights below any longer.    Finally, the pilot announced that it was too stormy for the airplane, a Bombardier Q400, to land safely.  Winds at the Sacramento International Airport were clocked at more than 55 knots, about 63M.P.H.  Consequently, we did not land in Sacramento that night.  I thought we might be diverted to San Jose or San Francisco and bussed back to Sacramento but, no.  We turned around and flew right back to Portland.  The return flight was just as unsettling as the flight to Sacramento but on the way back we didn’t have access to the single rest room which had to be closed due to a malfunction.  I spent the night in Portland and returned home Thursday afternoon on a blissfully calm and peaceful flight.

As the SuperShuttle van ferried me home from the airport, we drove along Elverta Rd., just east of Highway 99, a mile or two from the airport as the crow flies and we saw six or seven telephone poles that had snapped off at ground level during the previous night’s storm. They’d toppled into a flooded irrigation ditch alongside some rice fields.  What a shock to see them.  There’s no doubt in my mind that the pilot made the right decision to return us to Oregon.   I went back Friday afternoon and photographed them.  The airport is at the left in front of the trees barely visible near the horizon, and behind the vehicle in the photograph. 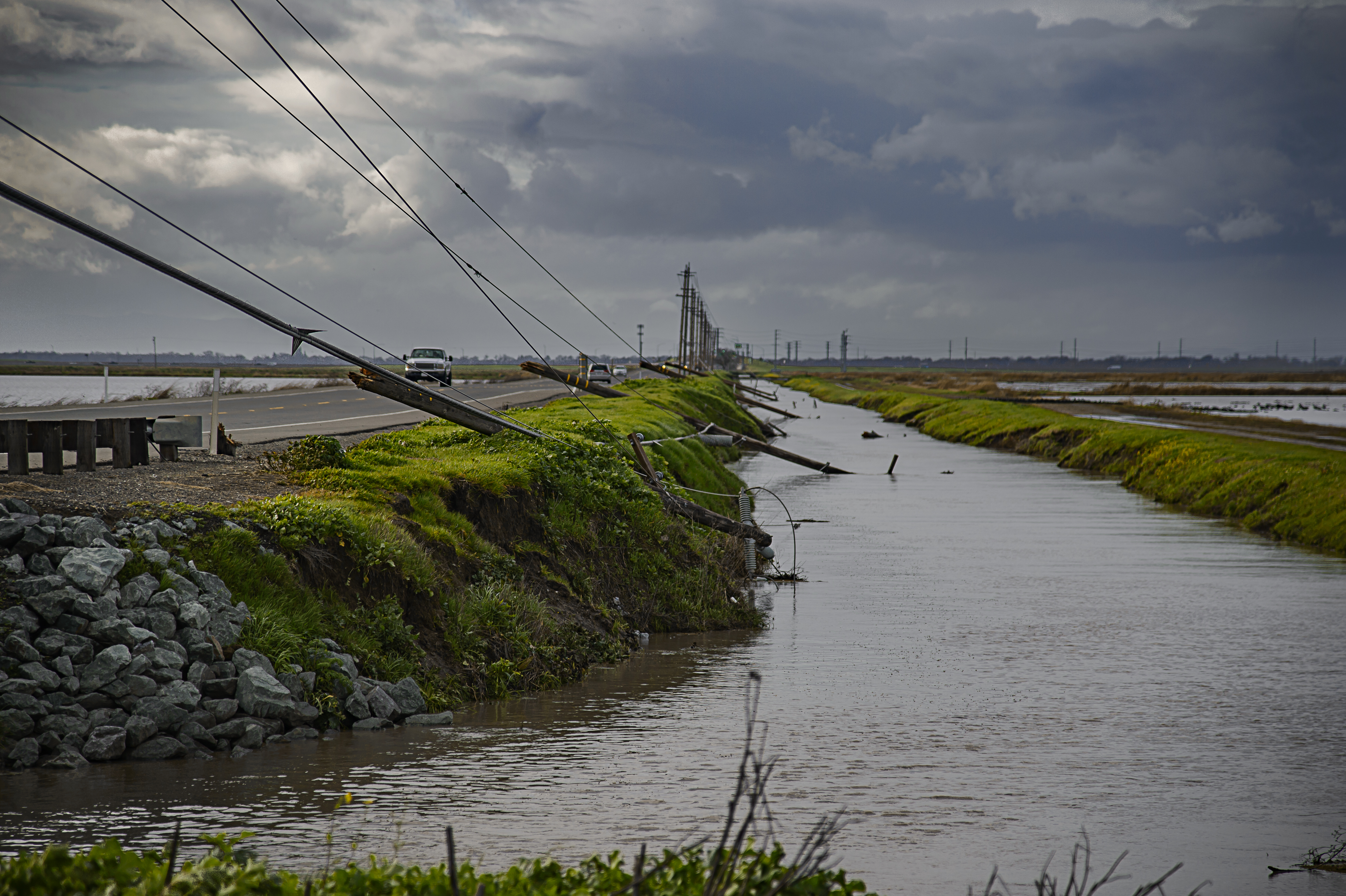