On Friday, I took a Fireworks Photography class at Action Camera and we traveled to the Fireworks and Freedom Concert at the El Dorado Hills Town Center to put our new-found skills into practice. Click here to see a few of the shots I posted on The Fourth of July. We spent an hour and a half in class; had a 40 minute drive to El Dorado Hills; set up at the venue; stood around waiting more than two and a half hours for the fireworks to begin; and then frantically verified exposure and focus (all manual) when the fireworks suddenly started exploding across from us. I had planned to try a couple of interesting techniques I learned in class but the fireworks ended after just 15 minutes and, although I had a flash light, I was reluctant to fiddle too much with my settings because the crowd had closed in behind us and was literally breathing down our necks. Any movement like changing lenses or camera position would have been awkward if not impossible. We had the best view of the fireworks because early on, we had claimed the railing of the bridge giving us a clear view of the fireworks directly across the pond. The crowd had been distracted by a band playing down the street but when the fireworks started, we were quickly inundated and it was difficult to move at all.

The event was so crowded that when we first attempted to leave after the fireworks ended, we sat in the parking lot without moving an inch for about 10 minutes. My friend suggested we pull back into the parking slot we’d vacated and find a place to have a glass of wine while we waited for the crowd to disperse. An hour later, we returned to the car and zipped right out of the parking lot, only to stop dead again as the roads were now clogged, the main road to the freeway was closed, and we were detoured in a circuitous route back to the freeway. I didn’t get home until about 12:30 AM and of course I had to review my photos to find some for a Fourth of July post before I went to bed. At that hour, I didn’t feel at all like writing anything about the experience so I didn’t.

This is the second time I’ve photographed fireworks. The photographs of fireworks at this event seem to be a bit different from those I photographed two years ago. The one common thing, though, is what I call the palm tree effect. When you hold the shutter open for several seconds, the camera records all of the light it sees during that time. The human eye doesn’t retain the light images the same way so we don’t see the palm tree effect as we’re watching the fireworks live. With the camera, everything the camera sees during the exposure is recorded in the photograph. If the shutter opens before the firework launches, the camera records the light reflected as the firework streaks upward as well as the the explosion, which creates the palm tree effect. As I reviewed the shots, I could hear Maria Muldaur singing in the background, “Midnight at the oasis, send your camel to bed….”

These are my favorite palm tree photographs from the other night. In the first shot, I included a bit of the horizon which can be seen as a few dots of light along the lower edge. I changed the angle of the camera and pointed it upward a bit more, eliminating the horizon and capturing more of the fireworks. I should have used a wider-angle lens. My 14-24mm lens was in the trunk of my car in the parking lot at Action Camera in Roseville. I used my 24-70mm lens which is my favorite lens but it didn’t have a wide enough angle to capture all of the fireworks in the sky and the horizon too. 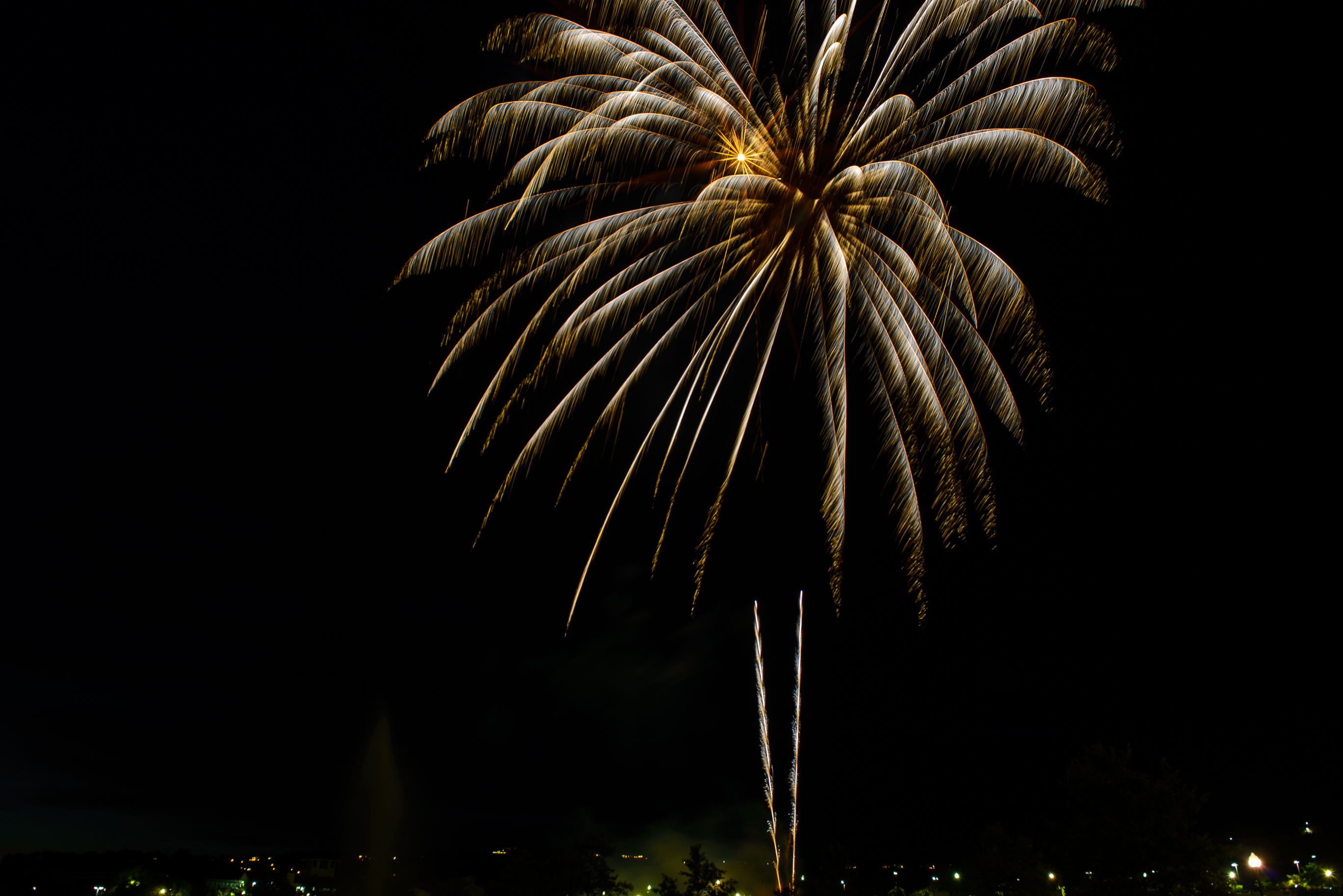 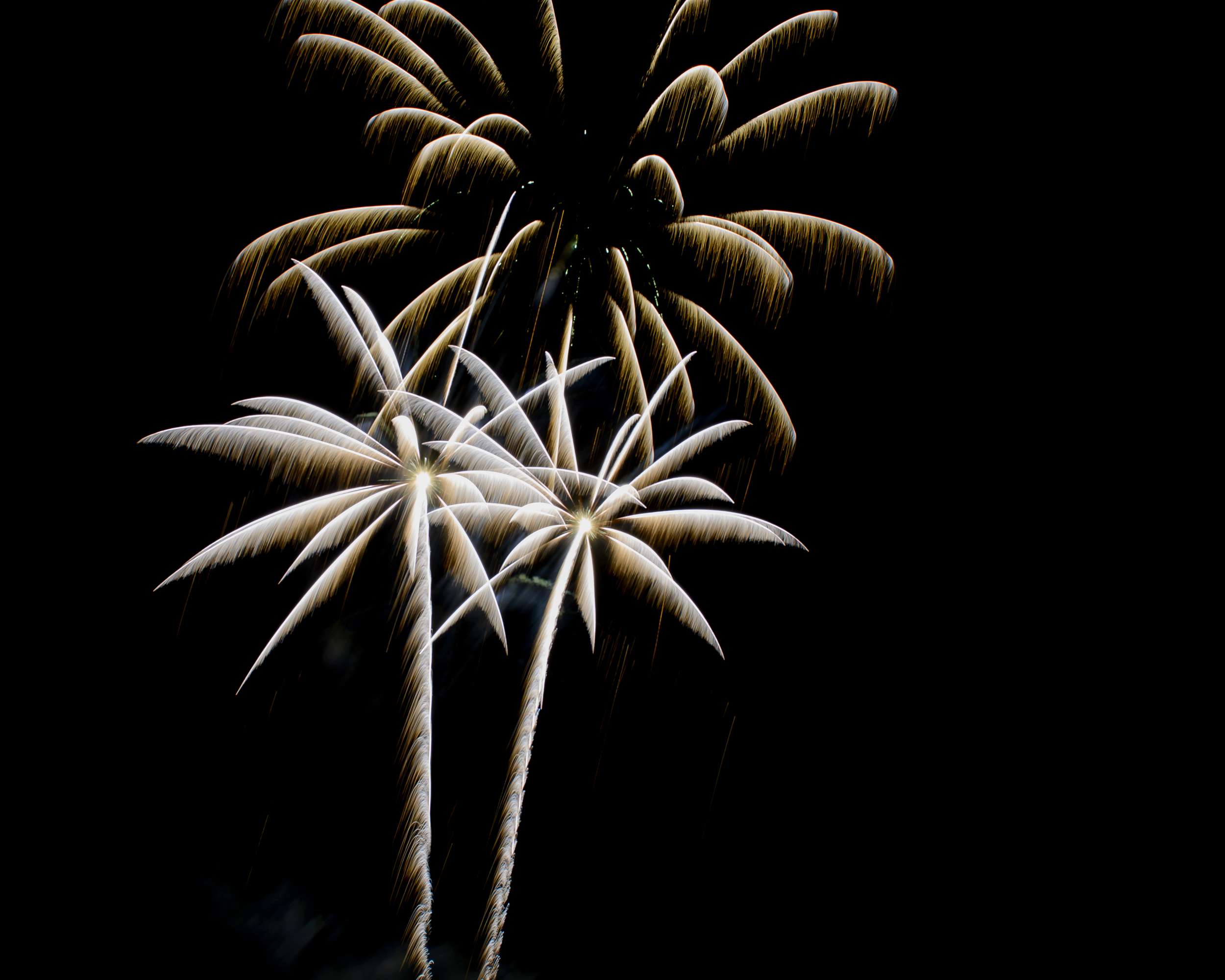 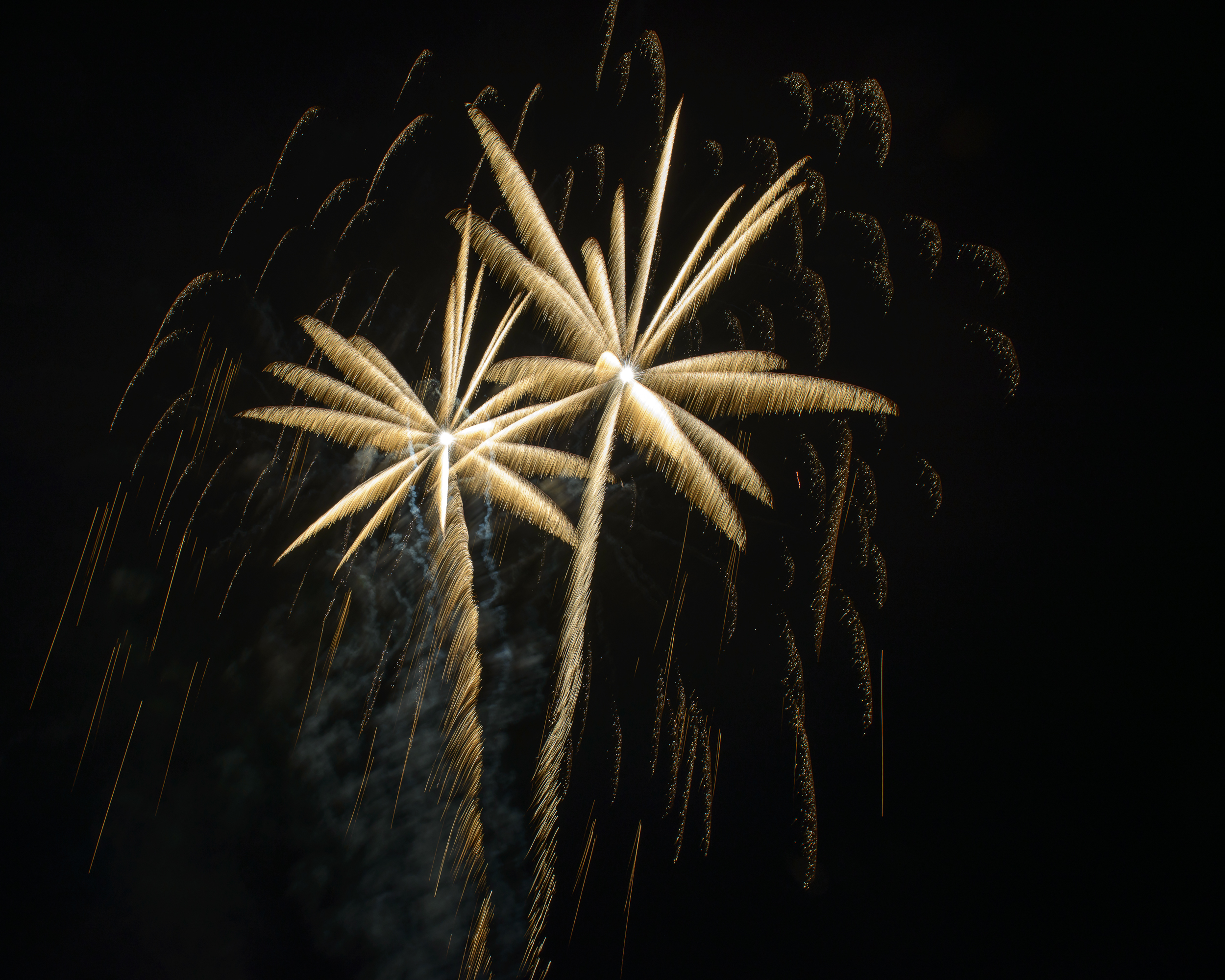