But they did tell me and I’m still alive! Last week at my Camera Club, after it become known that I had just purchased a new Nikon 600mm lens, there was much talk of an osprey nest, its whereabouts classified and known by only a privileged few. Since I now had a lens that could potentially reach out and almost touch the birds, could I be trusted with the location? I volunteered to be blindfolded and led there, clueless of where I might be. But, they were skeptical. Then, Bruce, one of my friends from the Camera Club, offered to take me there, my vision unobstructed. I never would have found it myself. It was off I-80 at an exit called Yuba Gap. From there we bounced and jostled for at least 20 minutes over a deeply rutted dirt road so narrow that the brush scraped the sides of the truck leaving scratches all down its sides. Bruce didn’t seem to mind, having visited there more than once. When the road came to an abrupt end, we were there. The osprey nest was atop a pine tree that had no top, perhaps the victim of a lightening strike or fire. All the other trees in the area were dead and had turned ghostly white. The nest tree still had brown bark, just no top. We set up our tripods with our cameras and lenses and waited for something to happen.

I have lots to learn about this new lens. First, I had a makeshift plate to hold it to the tripod. I used the plate from my D800 but that plate is too short. It seemed to hold the lens well enough but I was worried about it the entire time. My new lens plate was being delivered by UPS while I waited for action at the osprey nest. It was also quite breezy and I noticed a bit of camera shake from the wind. I used my wireless remote to trigger the camera to avoid any additional movement I might cause. Every time I touched the camera or the lens, it took a while to settle back down and sometimes if I triggered the shutter too quickly, the movement of the mirror caused enough shake to blur the shot. I recall when I used Moose’s 800mm lens in Wyoming, he admonished me to gently rest my hand on top of the lens when I triggered it and huffed at me when I forgot to do it a couple of times. I was afraid to do that at all today but I’m thinking that’s probably something to test out, especially once I get the new, sturdier lens plate attached. I also forgot to bring my 1.4x teleconverter. As it was, with the Nikon D7100, the lens is effectively 900mm. If I’d added the teleconverter, I think it would have been close to a 1200mm lens.

We waited for an hour while the two chicks alternately napped, stretched their wings, or looked around for Mom or Dad to return with lunch. Suddenly, the female flew in with a fish and the real action started. Then the male arrived with a fish. For a brief time all four huge birds were atop the nest. I think they brought in trout to feed the chicks. The shape of the fish the female has looks kind of trout-like to me. The fish the male brought in had a pink side, but the one shot I had of the fish was not in crisp focus. We watched for two hours and decided that there wasn’t a whole lot more to see until next feeding time. We left, but I’m pretty happy with the results. They’re not great shots but they’re decent. I cropped them all but one so you could see what I actually photographed.

This is the very first shot I took; it is cropped. After a couple of shots, I moved the camera to avoid a bush that kept blowing into my photos: 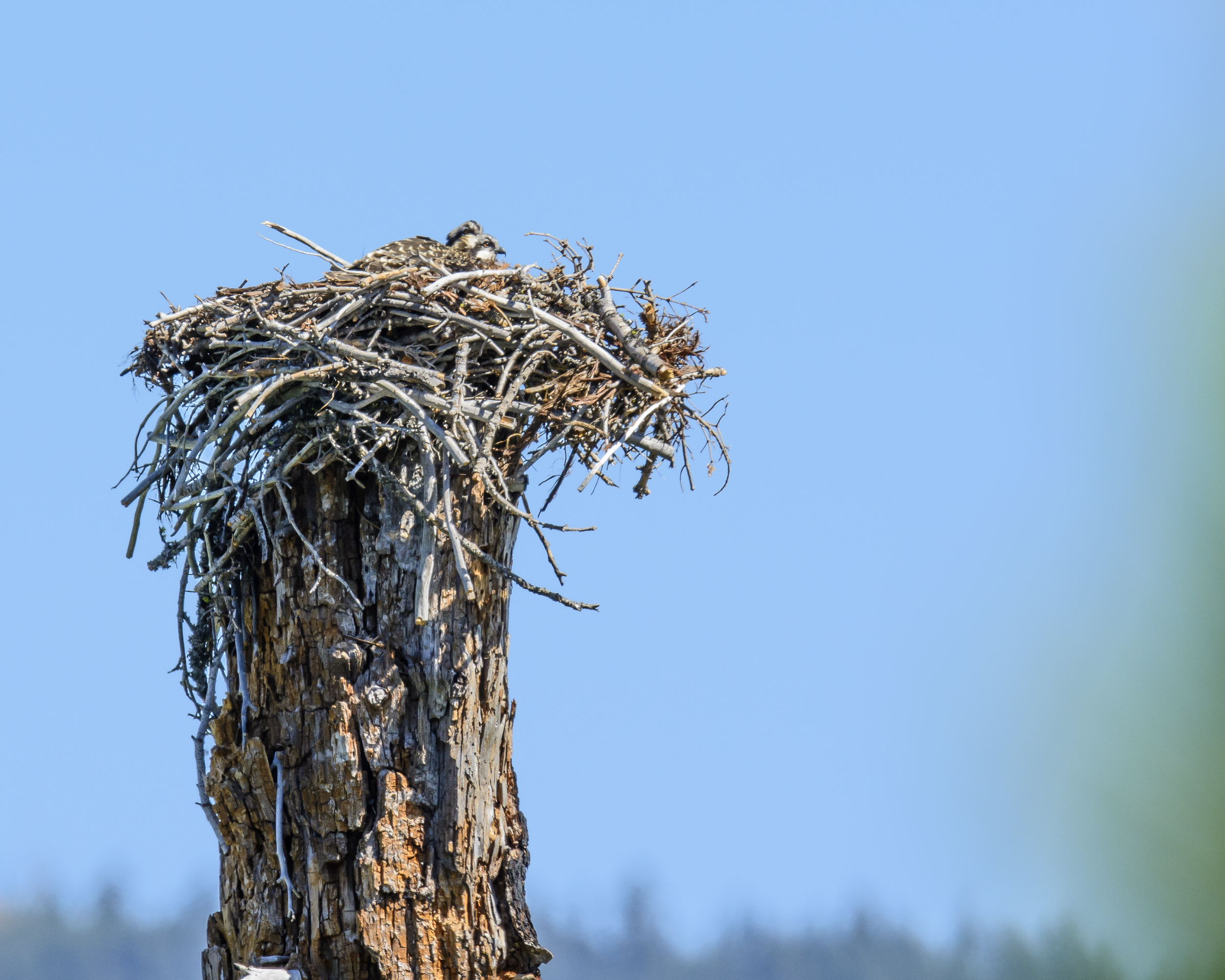 The uncropped view, after I moved the camera, I changed to a vertical format: 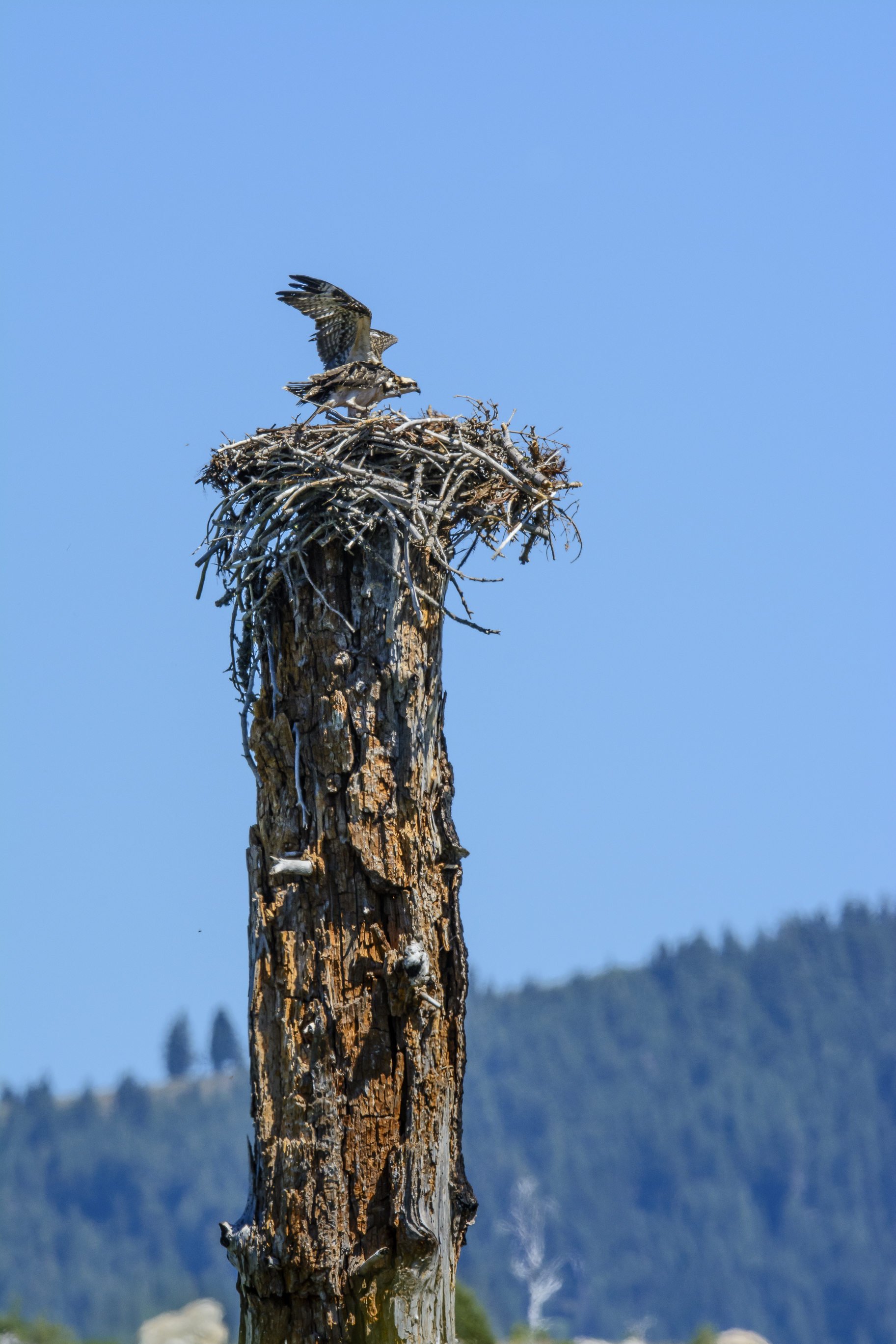 All the rest of the shots were taken in a vertical format but cropped to a horizontal format.

The female arrives with fish for lunch: 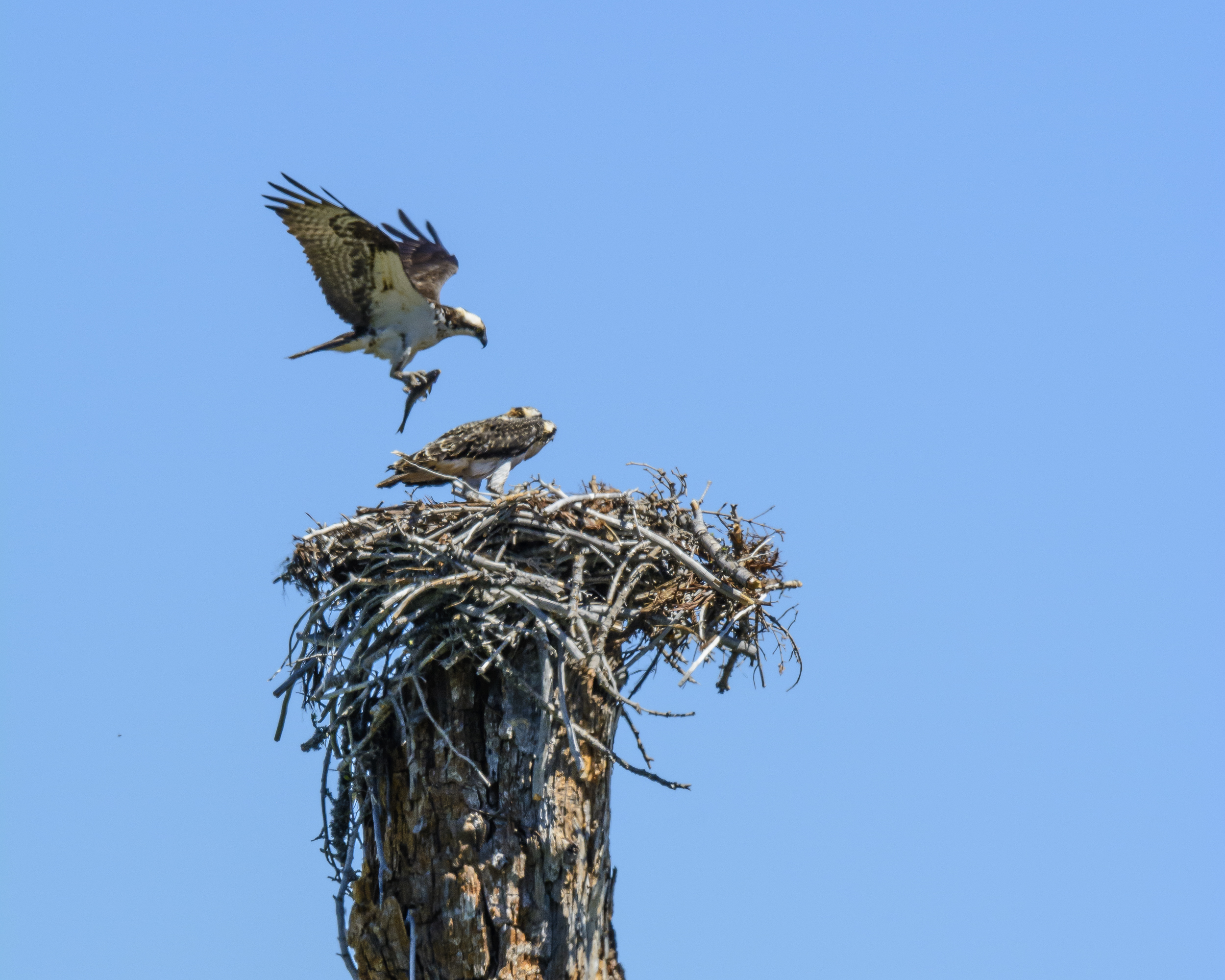 The chicks devour the fish while the female waits for the male: 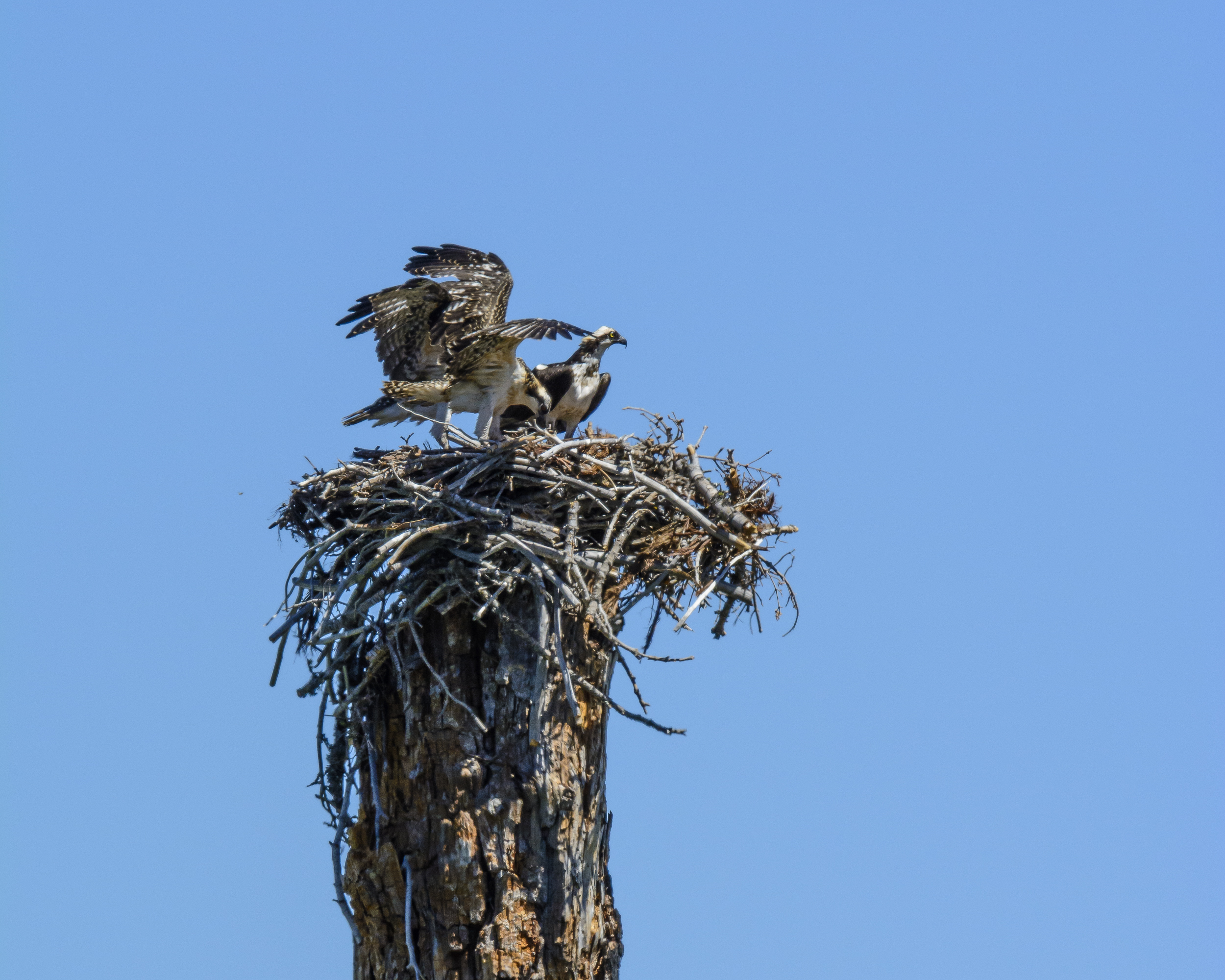 The male flies in about 90 seconds later with another fish: 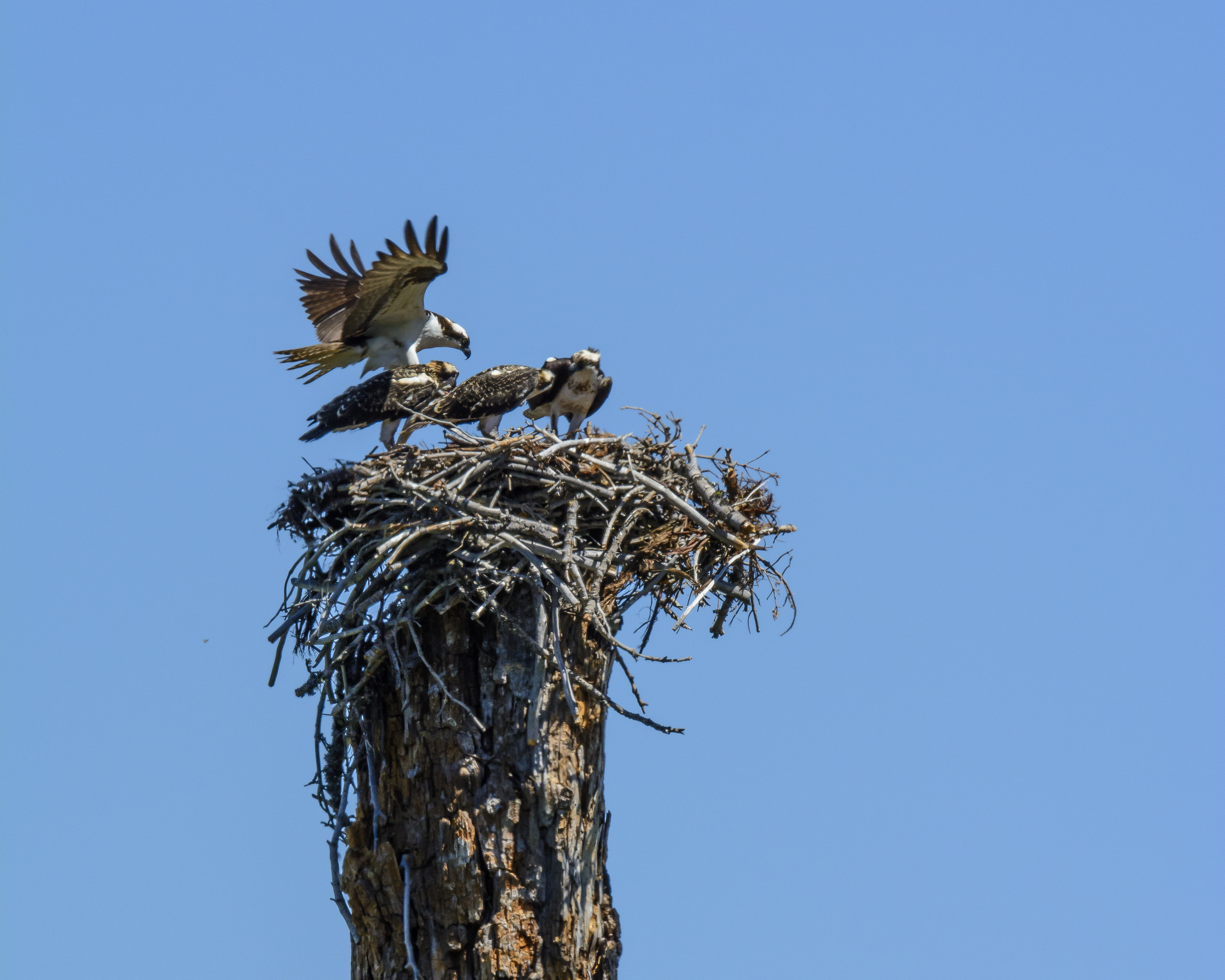 The male drops his fish and flies off just seconds after arriving: 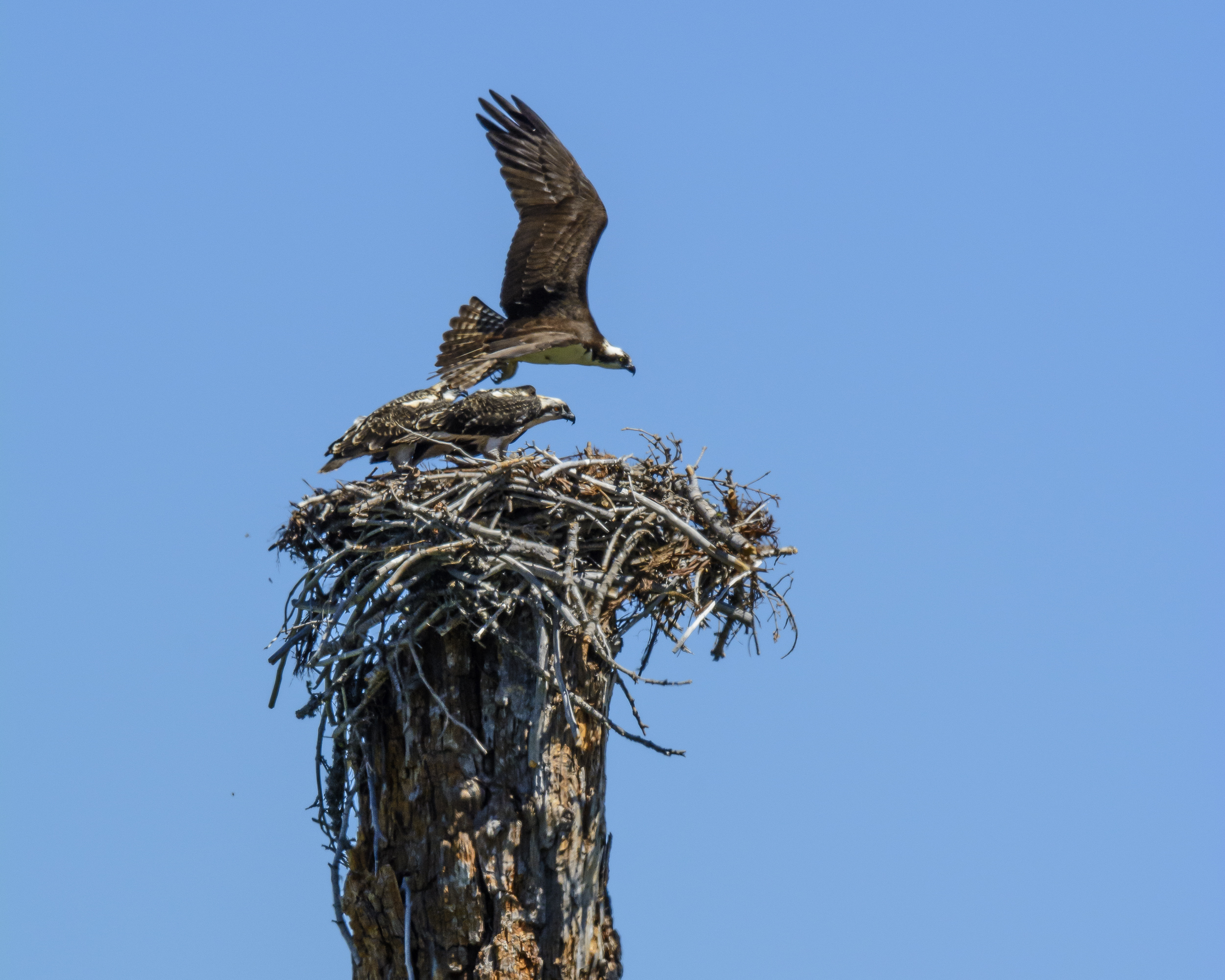 The female and the two chicks watch as male flies off to another tree: 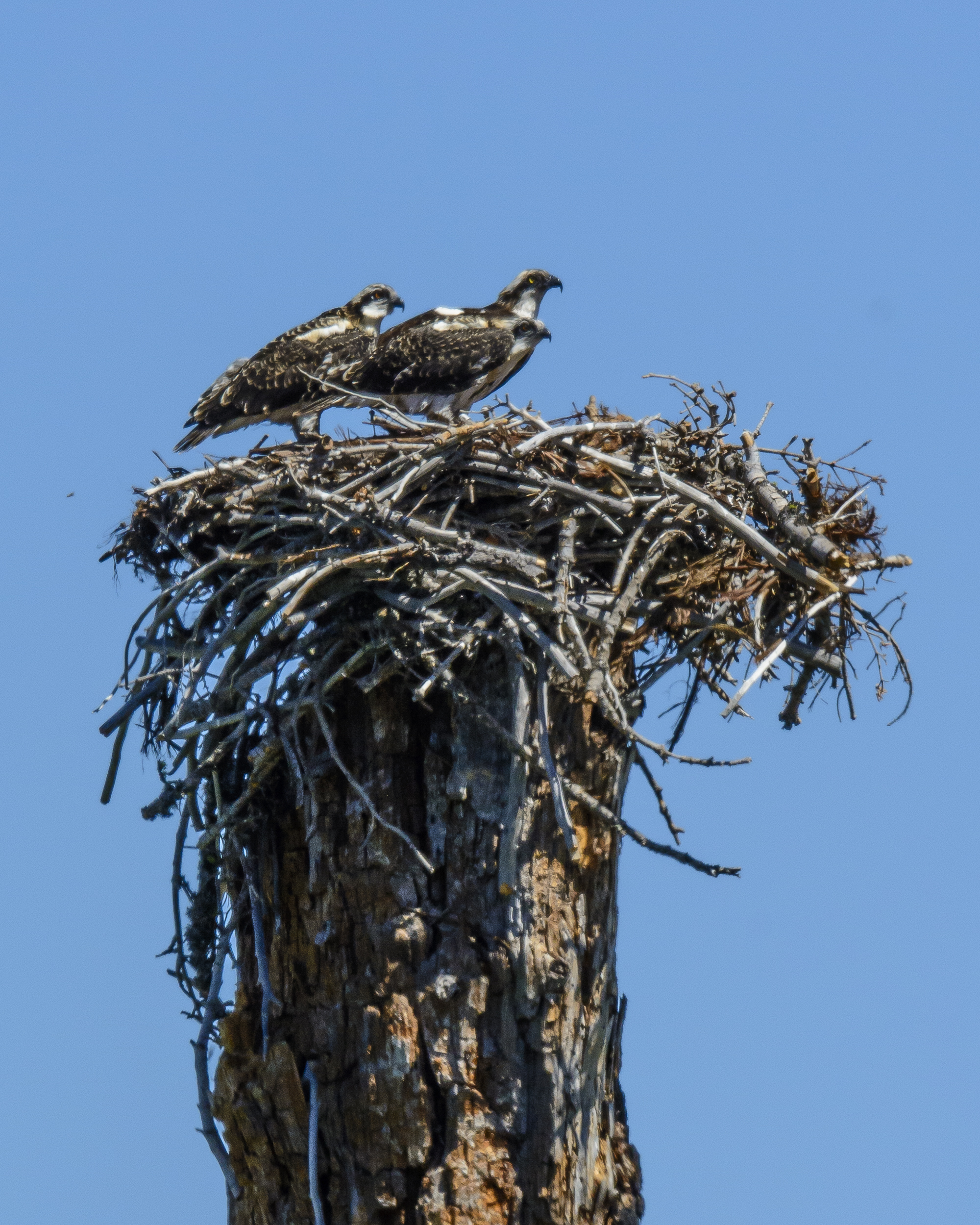 The male in a nearby tree, looks back toward the nest: 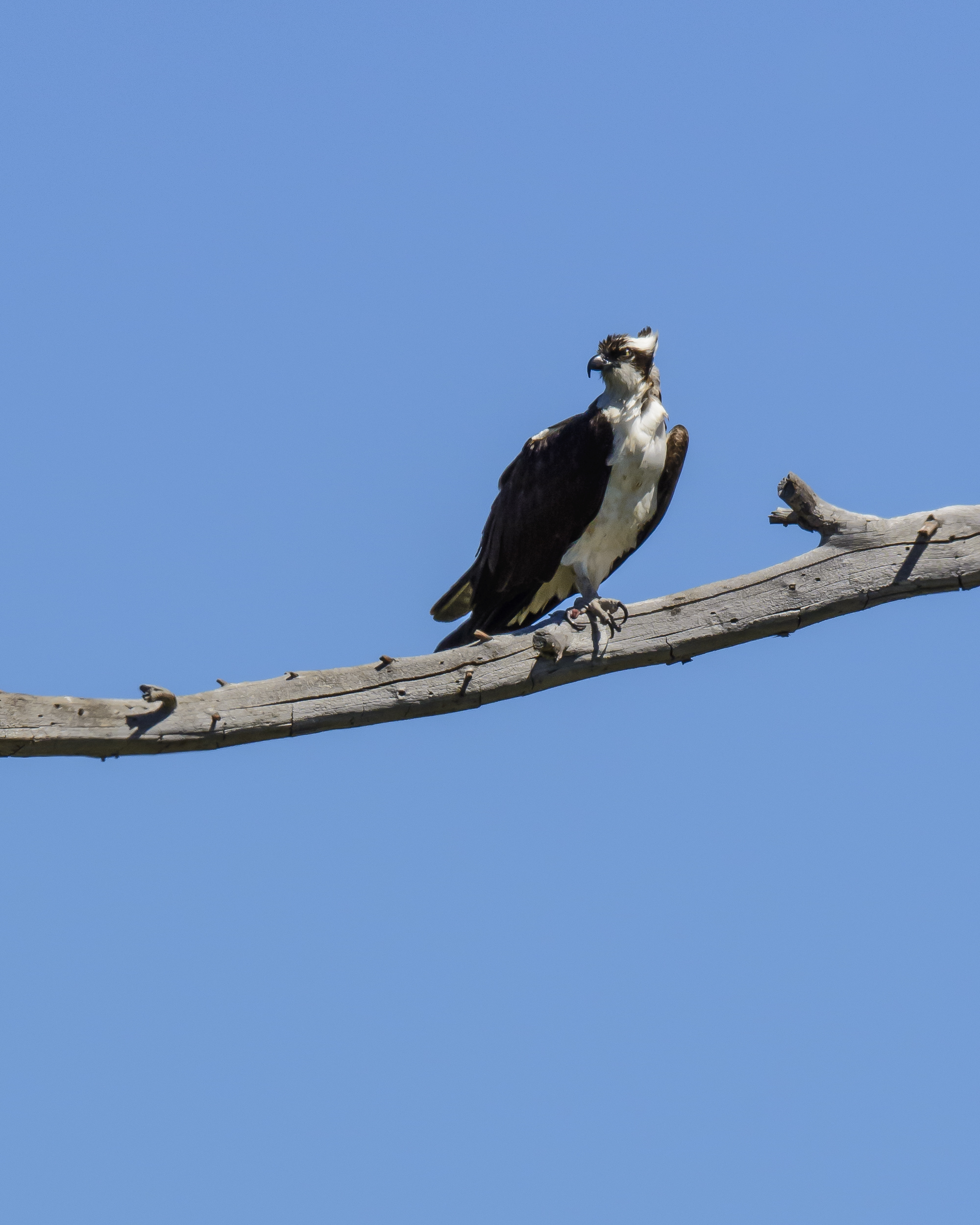