It was bound to happen.  I’ve been traveling so much recently, about twelve to fifteen photography trips a year, that the odds were against me—losing my checked luggage at the start of a trip, that is.  Monday morning it happened. I watched the baggage carousel as every bag but mine from the Denver flight to Bismarck, ND, appeared at the top of the conveyor belt and tipped onto the carousel. I flew first class from Sacramento so my bag was clearly marked with an orange priority tag and should have been one of the first bags put onto the carousel.  But, my bag went missing for 36 hours.   The airport is so small that United Airlines doesn’t have a dedicated baggage claim representative.  The ticket agents had to navigate unfamiliar territory as they struggled to figure out the intricacies of locating a missing bag and delivering it to an unhappy passenger as quickly as possible.

It’s been a frustrating couple of days, worrying about my luggage which contained two tripods, a ball head and a gimbal head, binoculars, camera chargers and cords, and my camera cleaning kit as well a five days of clothing for a climate turning cold.  Because of mild temperatures in Sacramento when I left Monday morning,  my warm jacket was packed along with the hats and gloves I needed for our days long adventure in Theodore Roosevelt National Park.   The only saving grace for me was that at the last minute to save space for more camera gear in my checked luggage, I decided to wear my hiking boots on the airplane.

On the way from the airport, Moose picked up the other two photographers joining our group, Emerson and Richard, but before we left for our hour drive to our base of operations in Dickinson, ND, we stopped at Dick’s Sporting Goods so I could shop.  I had to find a new jacket for the evening and the next day.  I also bought warm gloves, a knit cap, boot socks, a top for layering, and a Clearance ticketed T-shirt for sleeping.    I gathered up tooth paste and tooth brush, contact lens solutions, a hair brush, and other items on the way.

The good news is that I had most of my camera gear so I could still take photographs.  Missing a tripod was not the end of the world for a day or so.  But after many telephone conversations with United baggage representatives based outside of the US (!) the outcome did not appear promising.  As the hours dragged on and my luggage didn’t arrive Monday night, I really began to worry.  I was not receiving the promised text updates at prescribed intervals, the “find my suitcase” website which the airlines use to track and coordinate missing bags, almost gleefully announced that the area I was in wasn’t served by them. I listened to the same single message for a 24 hour period on the luggage hot line that always started with “Hello, Carol, It’s nice to have you back again!” then continue with “your luggage has been located and is enroute to the airport.  It will be delivered to the address on file (my hotel) as soon as possible.”  “As soon as possible” never seemed to arrive.  And, each resource to which United pointed me offered conflicting information.

Finally, after a lengthy conversation with a United luggage claim representative midday Tuesday, I learned that my luggage had arrived in Bismarck from Denver on Monday afternoon, had been returned to Denver that evening, then flown to Dickinson on late Tuesday afternoon.  This makes no sense to me.  They could have driven the bag to me but instead, it crisscrossed the country.   My luggage now has more miles accumulated that I have.  Emerson was in the hotel lobby when the United delivery person with my luggage came in with the bag about 10:30 PM Tuesday.  Emerson brought the bag up to my room.  I had to chuckle when I noticed the RUSH tag, now crumpled and worn from so much handling. And, I wondered how a 36 hour multiple cross county trek by my luggage could be construed as rushing to return the luggage to me.  Alls well that ends well, though.  My luggage is here,  nothing was missing or damaged, and tomorrow I can wear clean clothes again. 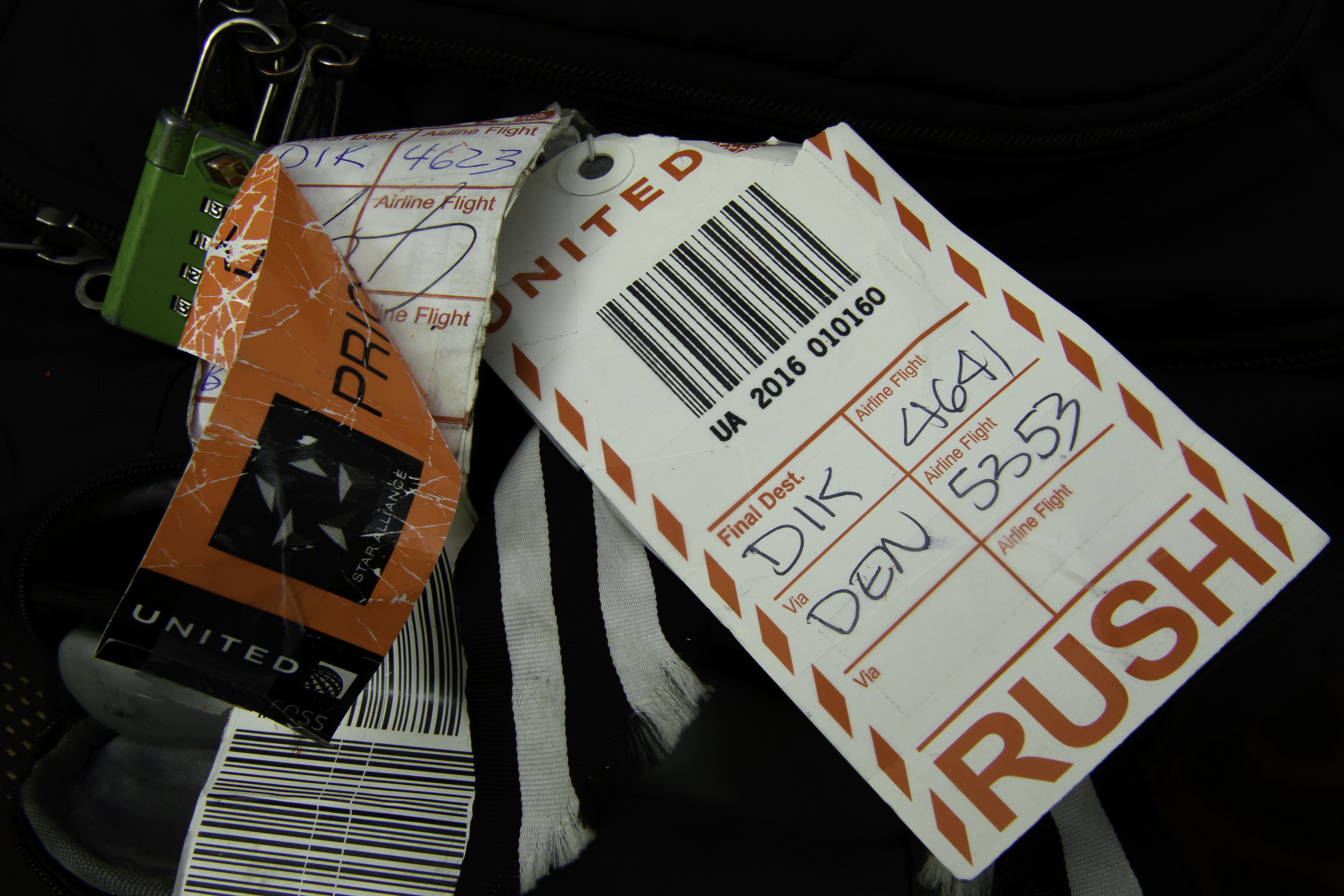