The Alaskan bull moose we encountered last week spent lots of their time either resting or eating.  This bull moose found a willow to munch on in the tall grasses. 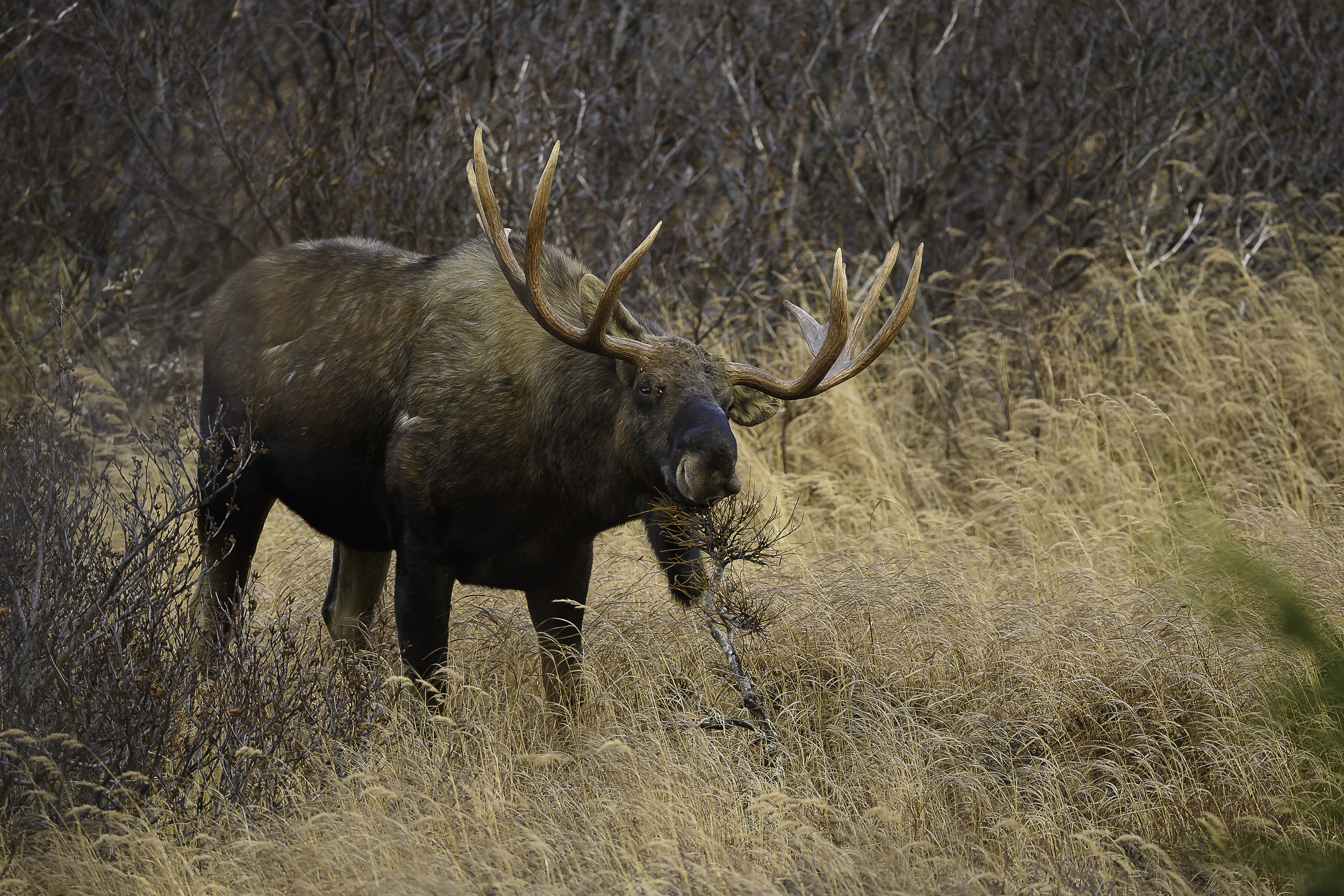 I never thought I’d be using my new super telephoto lens for a landscape shot, but here it is.  Using my new Nikkor 500mm f/5.6 PF lens, I focused on the snowy highlights on the slope at the far end of the valley.  The image looked black and white even though I shot in color so I converted it to black and white. 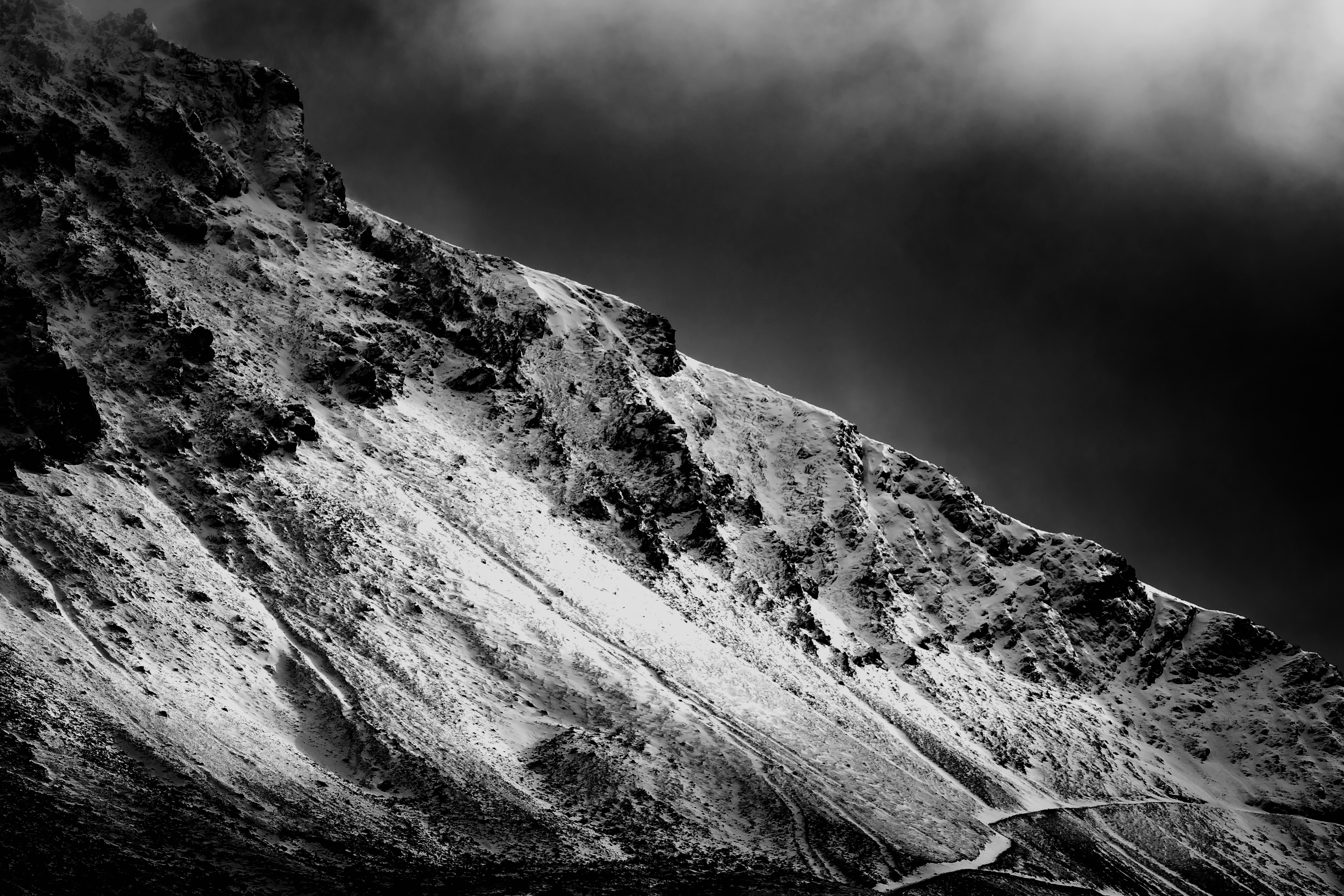 We caught the tail end of the rut when we got to Chugach State Park.  According to the National Park Service, moose rutting behavior peaks in Alaska during the first couple of weeks of October.  One of the rutting behaviors we witnessed is called sparring between these 1600 pound animals which is described as pushing and shoving but which rarely results in injury.  Usually, after a brief sparring contest, the bulls will return to eating.  This behavior is often practiced by younger bulls to get experience as they test each other and sometimes the more dominant bulls.  We watched one group of three bulls spar briefly, then return to grazing, then spar again. The bull with the smallest rack of antlers, the younger of the three, seemed to be the aggressor, testing his prowess against the older, larger, more experienced bulls.

In the first shot, two of the bulls face off.  In the second, the bulls with the smallest and the largest antlers engage.  In the last, the same two take a brief break from sparring to feed, with their antlers still touching. 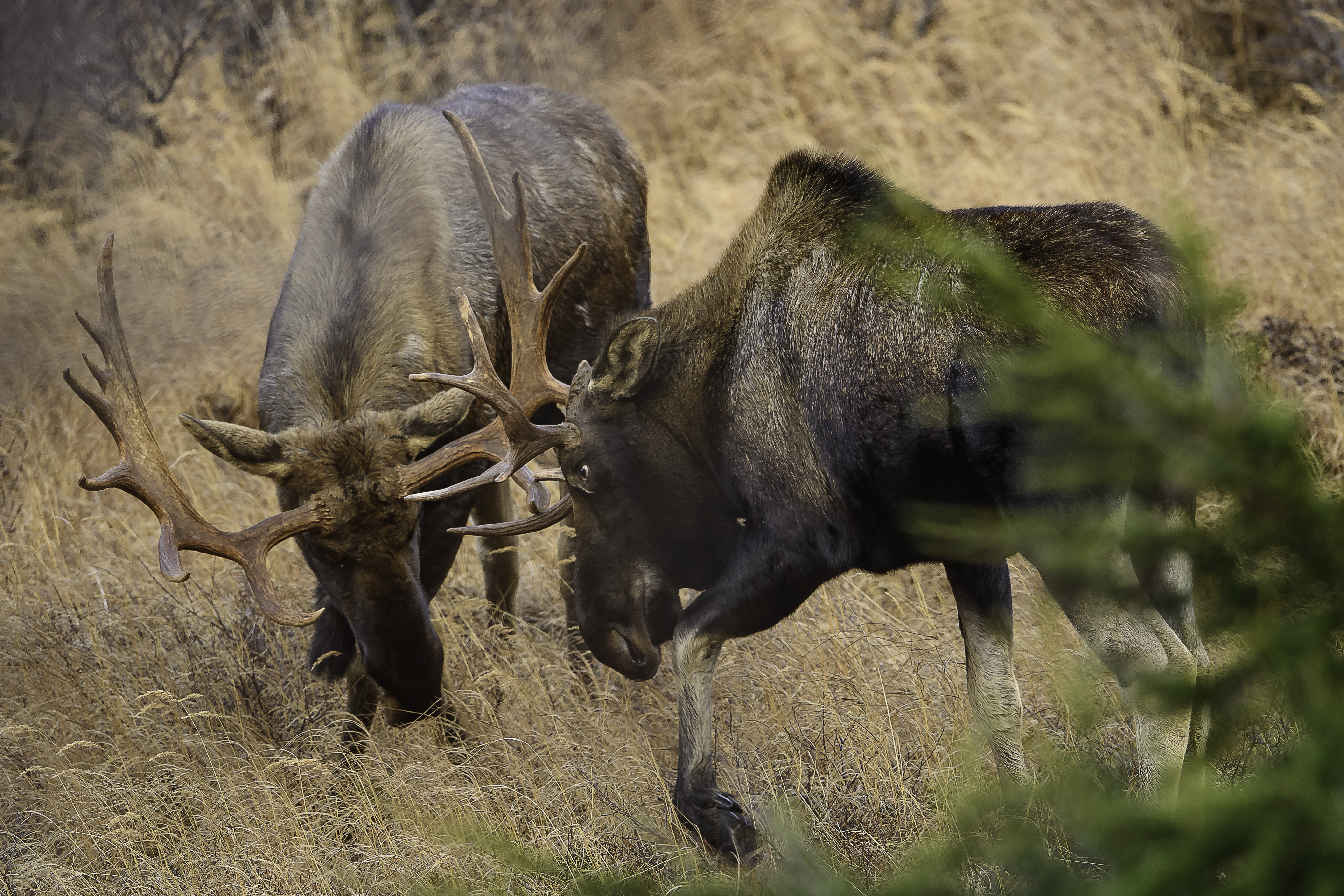 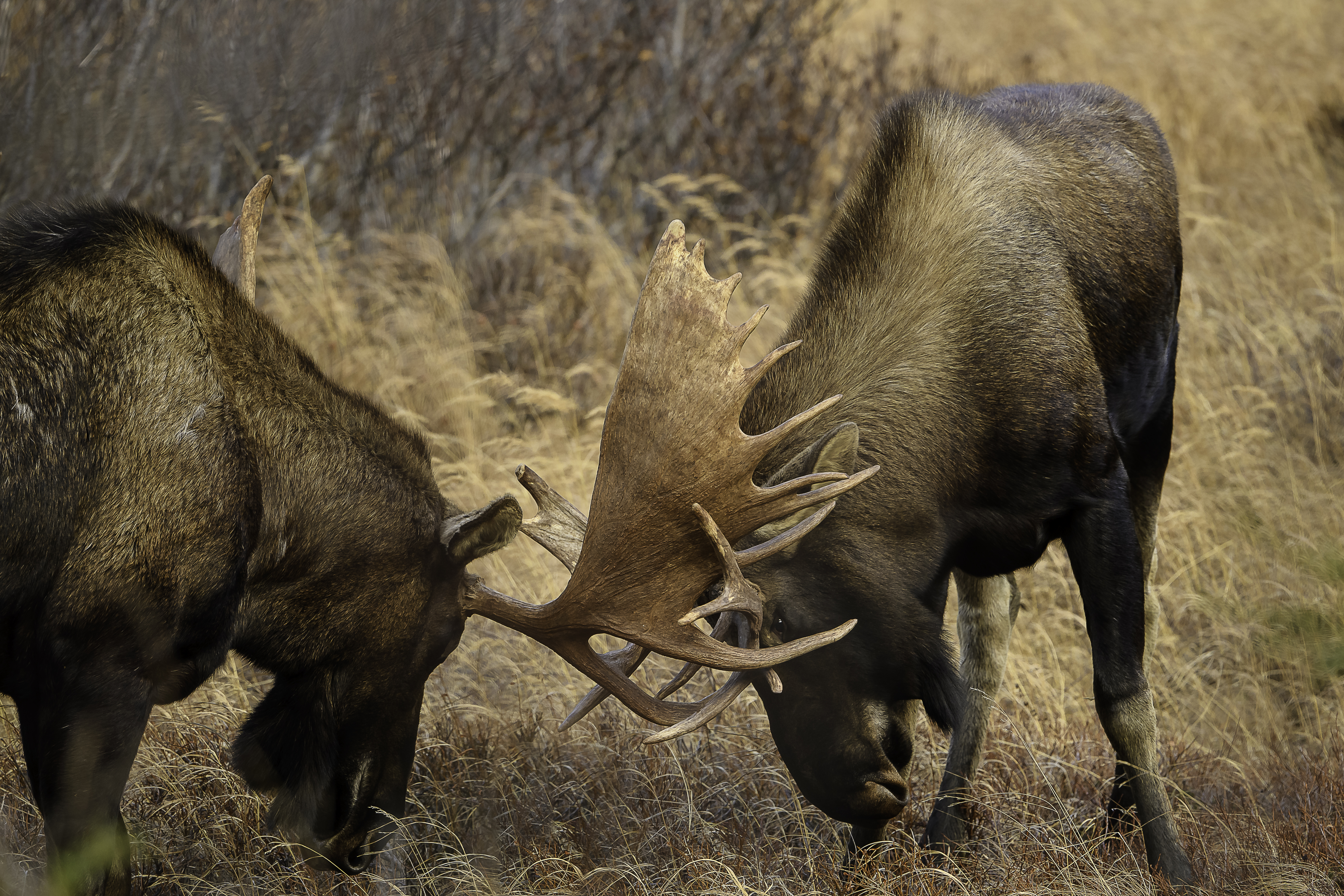 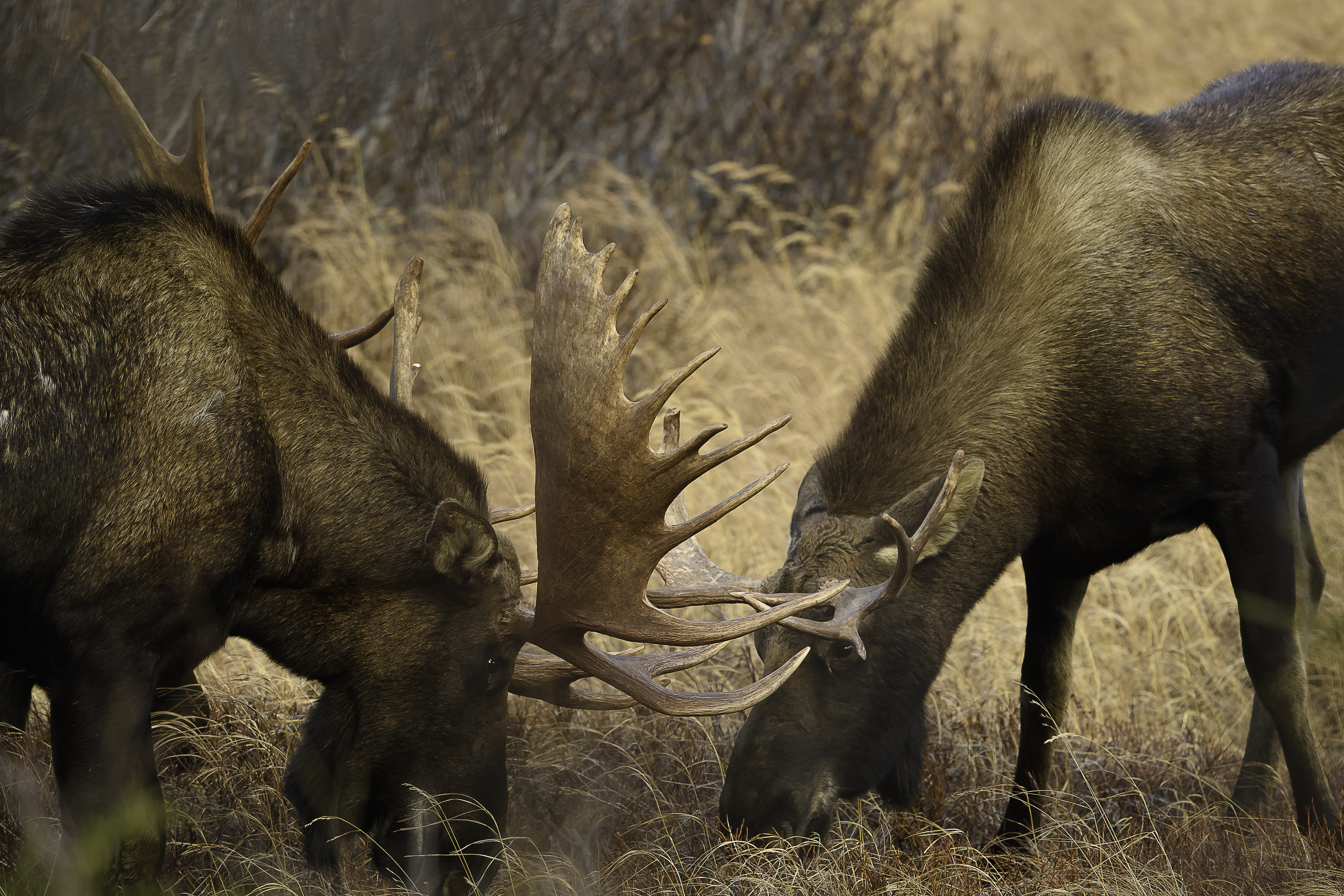 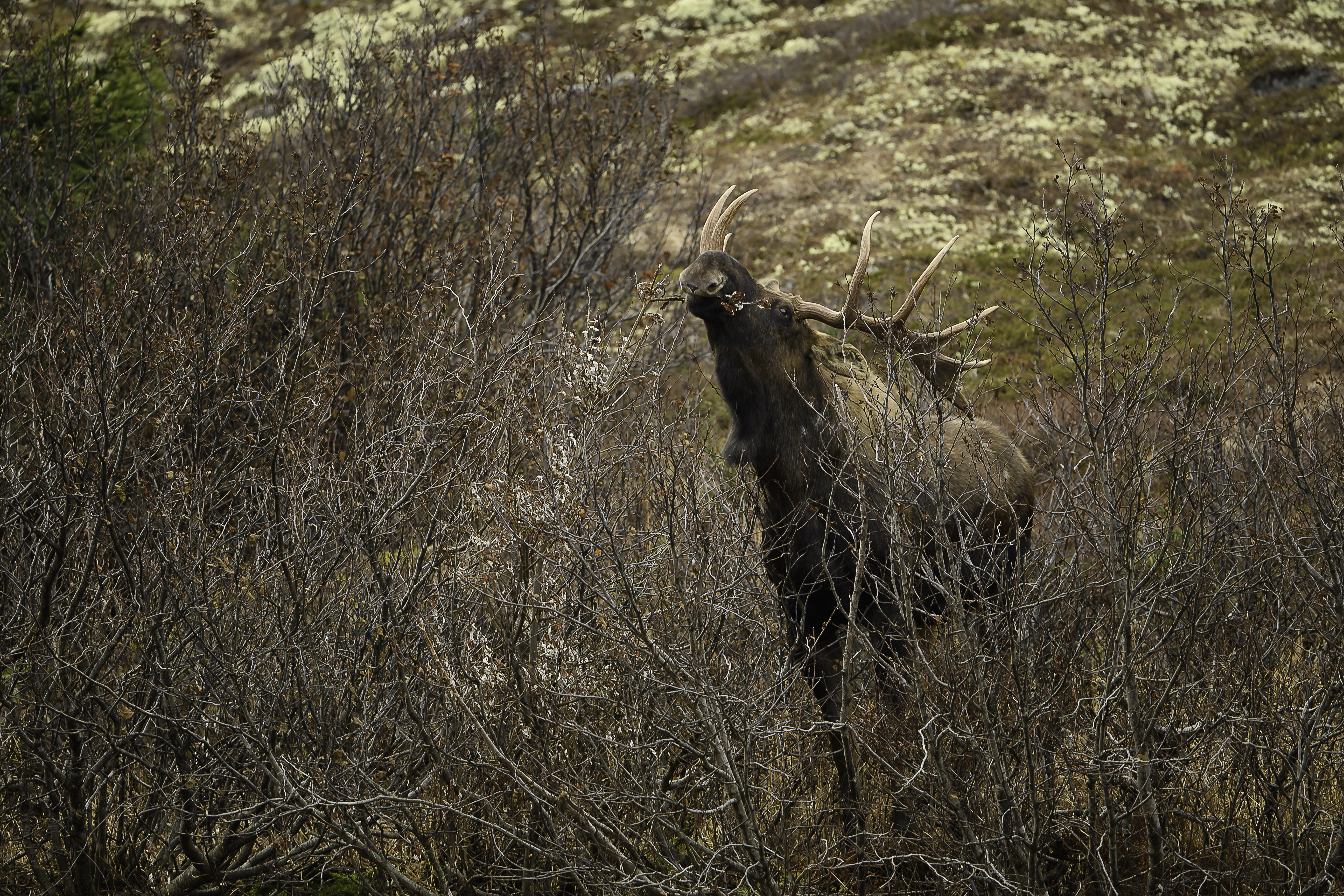 The moose we observed in Chugach State Park in Anchorage spent most of the time either resting or foraging in the willows.  In these photographs, this bull moose took one last look around before he laid his head down and went to sleep.  One side of that huge rack of antlers just seemed to disappear into the tundra.  How do they do that? 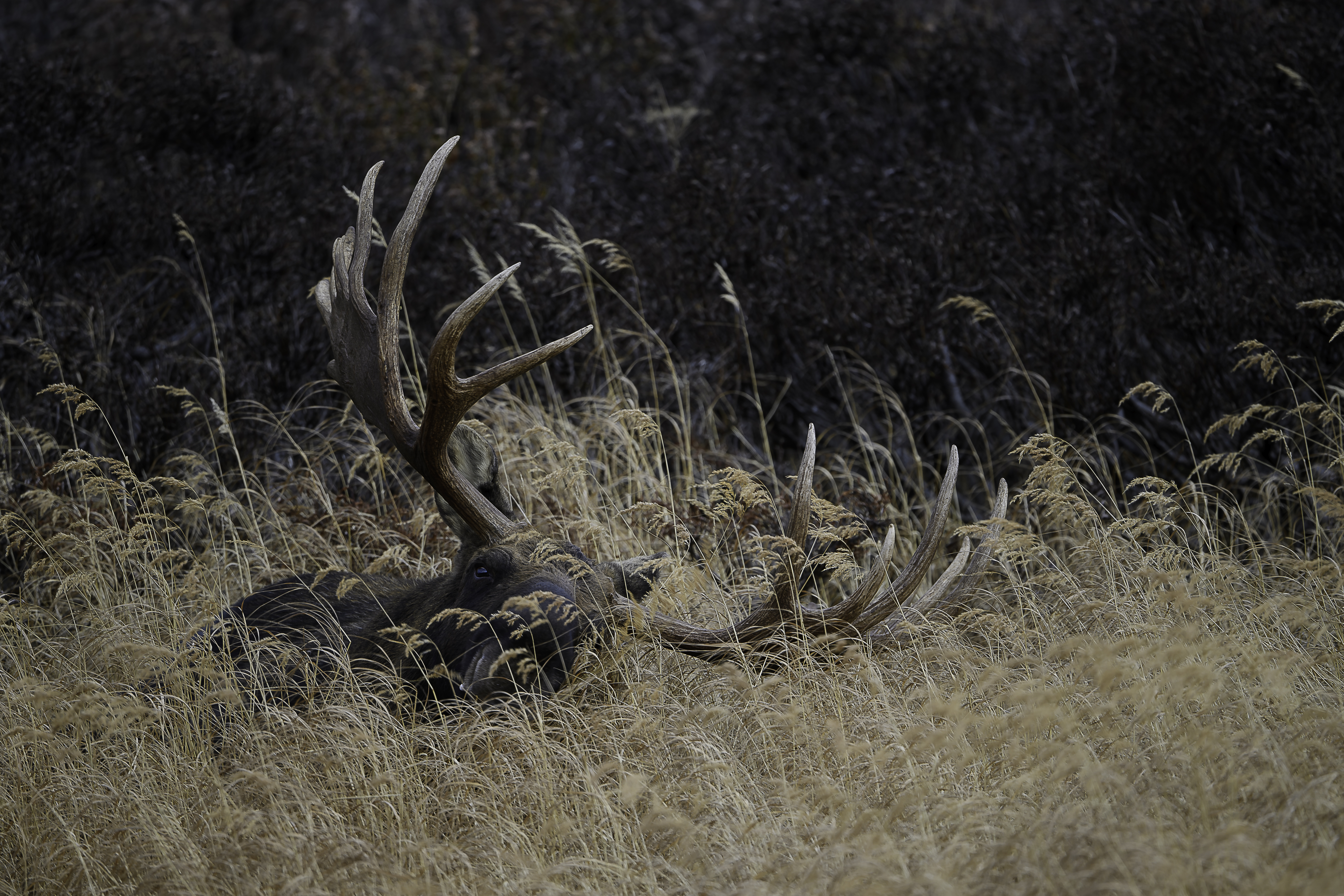 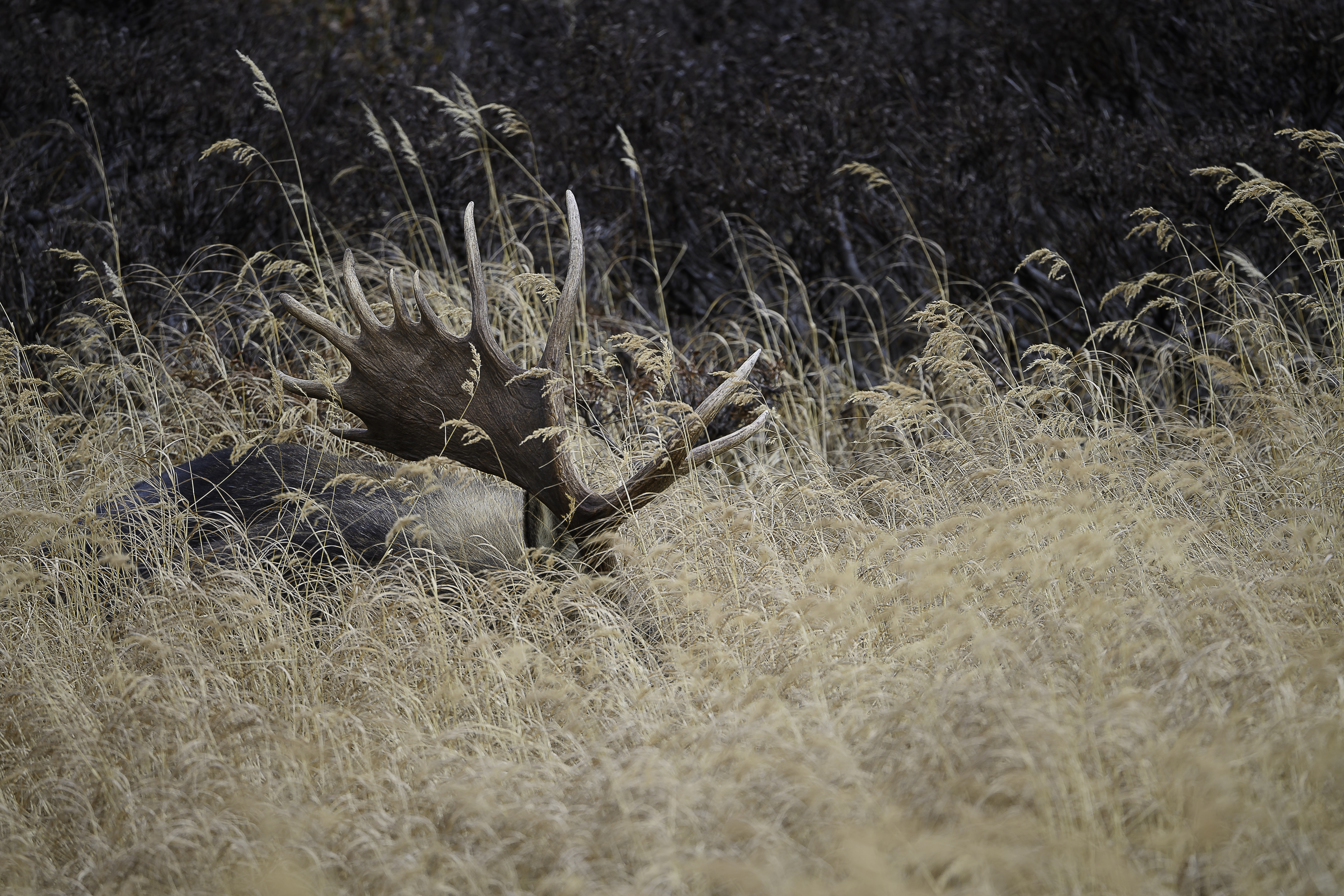 Weather kept us from starting our search for moose in Alaska until Wednesday.  Tuesday, it  poured all day and our weather apps reported “dangerously high winds.”  We felt those winds as our van was buffeted by them while we drove around Anchorage and Chugach State Park in search of shooting locations when the weather improved.  Wednesday dawned cloudy and cool but the rains were only light, intermittent drizzle.  We set off for Chugach State Park in seach of bull moose to photograph but again we were thwarted by the weather.  The winds had returned and were intermittently strong enough to keep the moose hunkered down in the shelter of the lee side of the trees.   Not to be deterred again, we donned our backpacks, slung our tripods over our shoulders, and headed off from the Glen Alps Trail Head along the Poweline Trail toward the German Bridge over Campbell Creek.  We spotted several bull moose, all hunkered down, avoiding the wind.  After about two miles, we stopped to watch one of the resting moose and decided to take our chances there.  After an hour or so, the moose finally stood up to forage in the willows.  As he did, two other bull moose that had been hunkered down nearby also arose to forage.  We had a few minutes of exciting shooting as the three of them came together at one point, clashing a bit with those giant racks of antlers.  We were close enough to hear the strikes.  In between butts, they’d return to foraging, apparently the more important task at the moment.  Watch for this action in a future post here.

With this trip, I had a chance to try out my new Nikkor 500mm f/5.6 PF lens on wild critters, the reason I got this lens in the first place.  I tried it alone, with the 1.4x teleconverter and the 2.0x teleconverter.   The lens is very light and very sharp.  I’m having some trouble adjusting to focusing with the 2.0x teleconverter but I’m sure that will come with practice and proper technique.  And, when I do get that perfected, I will have a 1000mm reach with the Nikon D5 and 1500mm if I engage high speed crop.  This shot, taken of one of the bull moose as he fed on the willows, is at 500mm on the D5.  They were pretty close, just off the road.  We had to contend with willows on the sides of the road which encroached and impeded our view at times.  There are a few “soft” places in this photograph that are the ghosts of willows in the foreground.  At least when the lens is wide open, some encroachments closer to the lens almost disappear when focused on a subject in the distance. 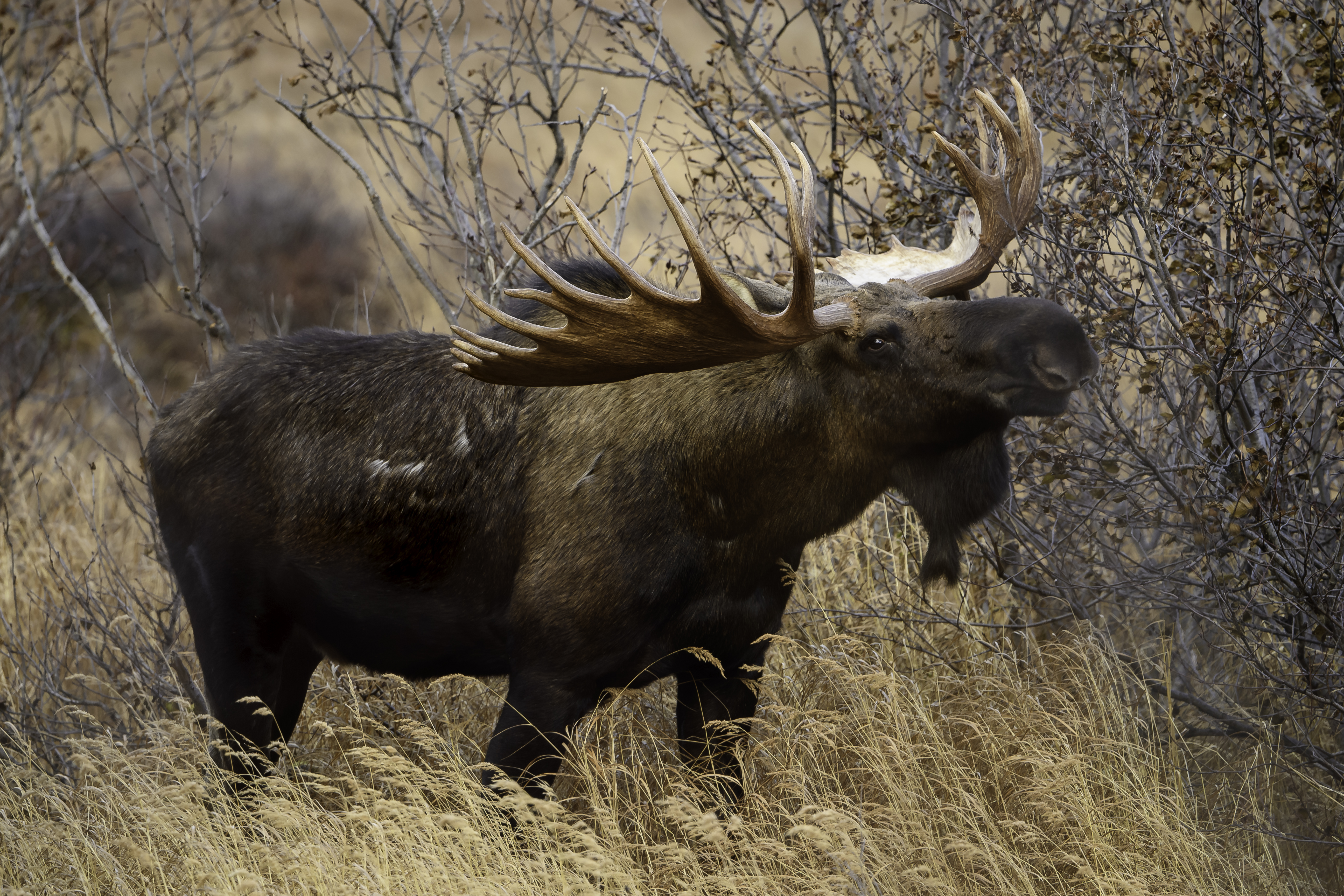 The light changed quickly at Oxbow Bend on our first morning in the Grand Tetons.  The rosy glow as the sun started to rise reflected off the wispy edges  of the clouds that surrounded and partially obscured the Teton Range.  To the right, Mount Moran is almost completely enveloped. 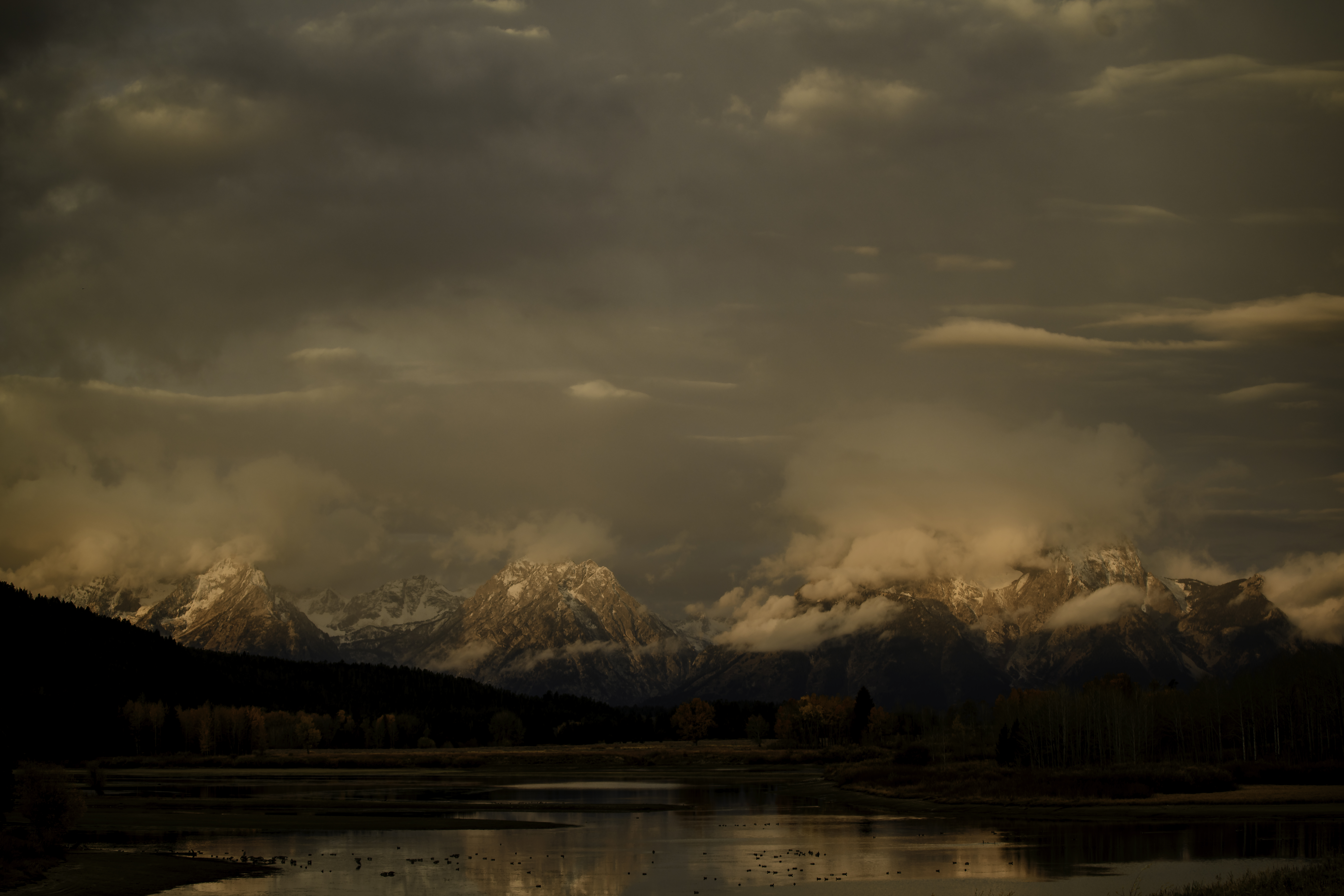 Seeing aspens turn to their gorgeous autumn hues  stops you in your tracks.  Some are yellow, some are gold, some are orange.  It does the heart good to capture their glorious display before they fall. 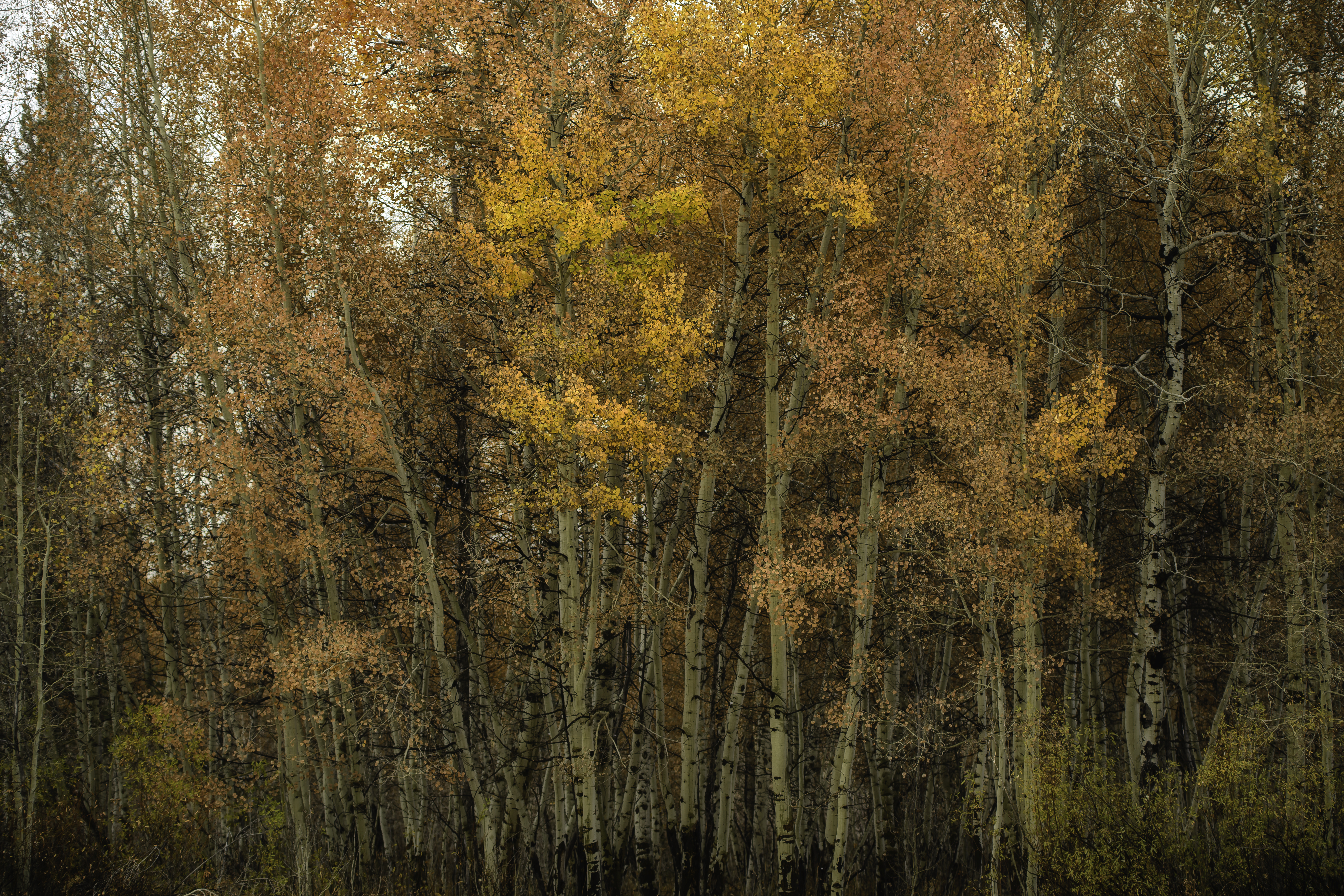 Aspens are spectacular in the fall when their leaves turn to a brilliant yellow. But, when all their leaves have fallen, there is something about the stark bare white trunks and branches that is at once, mysterious and mesmerizing. 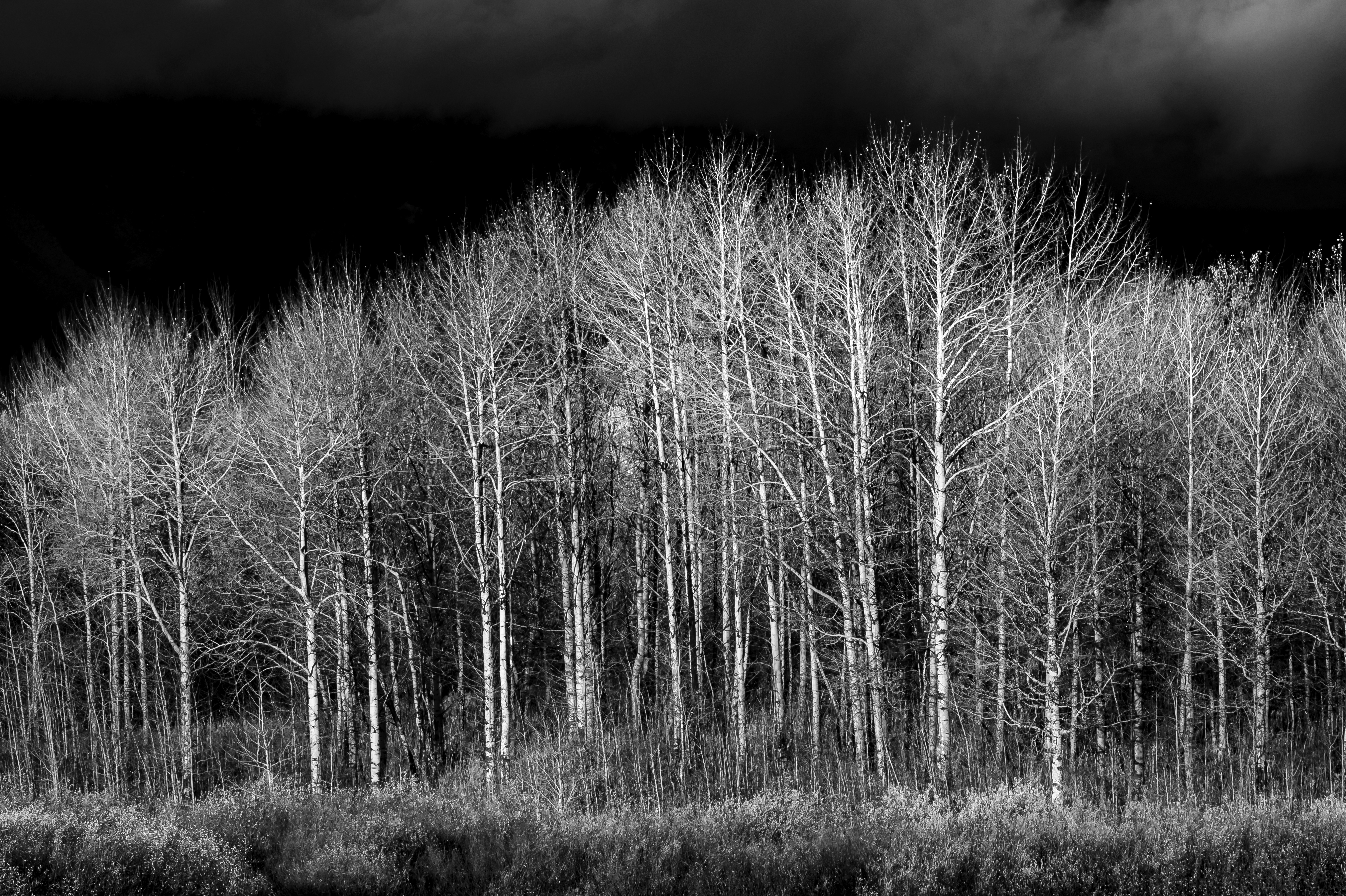 In late August, Nikon released several new products that are smaller, lighter, and feature great advancements.  One of those products has found its way to me. My new Nikkor 500mm f/5.6E PF ED VR arrived before noon on Saturday, just in time to accompany me to Alaska to photograph moose.

At half the length and slightly more than a third of the weight, my new 500mm lens will replace Big Bertha, my beloved 600mm lens which accompanied me to Alaska two years ago.   I have taken many remarkable photographs with Big Bertha and some of my all-time favorites are among them.  But I know that this smaller, lighter, lens will serve me well and I look forward to taking many photographic journeys with it.  Losing weight from my camera rig is a good thing.  I have managed to schlep the big lens and heavy tripod on my shoulder over lots of terrain in many states in the US and in several countries outside the US, but I look forward to more photographic adventures using a lighter rig.

I didn’t have much of a chance to test out the new lens until late and I noticed that the moon was in the waxing gibbous phase which is not quite full.  I used my Nikon D500, new 500mm lens, 1.4X teleconverter, and set the camera to high speed crop so I had about a 1000mm reach at f/16, ISO 100, 1/80 second shutter.  Here’s Saturday evening’s waxing gibbous moon. 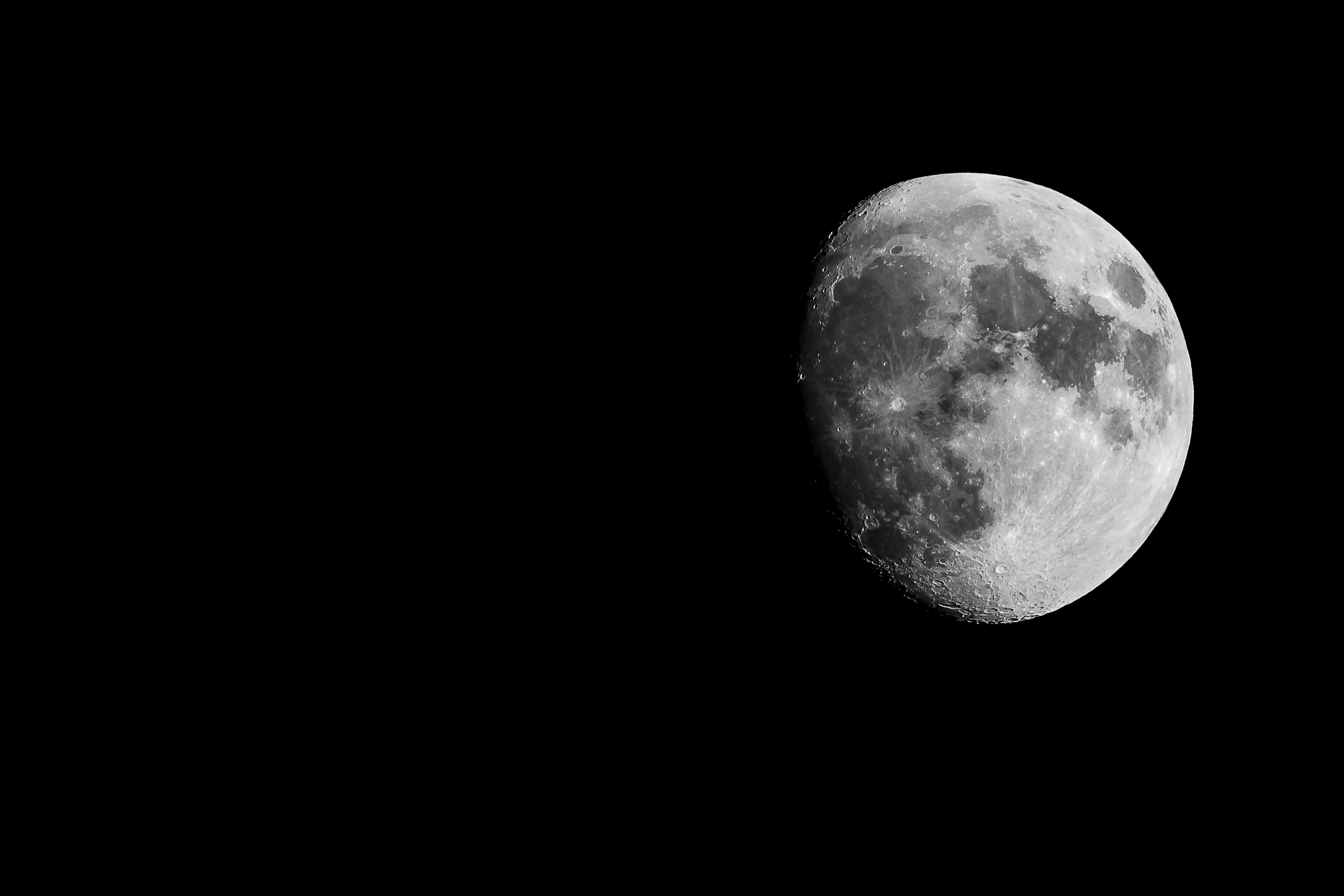 We visited the Mormon barns three times because the weather was not cooperating and we didn’t have the kind of skies we wanted for the scene.  On our first visit, the Grand Tetons, which create the elegant backdrop for the barns, were not visible at all, obscured completely by fog, overcast, and low clouds.  I took this photograph on our second visit.  It was mainly a reconnaisance visit to determine the best position so that when we returned for sunrise with the hoped for perfect cloudy sky behind the mountains, we would know exactly where to position ourselves as the sun lit the Grand Tetons behind the barn.  The shadows created by the midmorning sun serve as an interesting counterpoint to the streaky clouds in the sky. 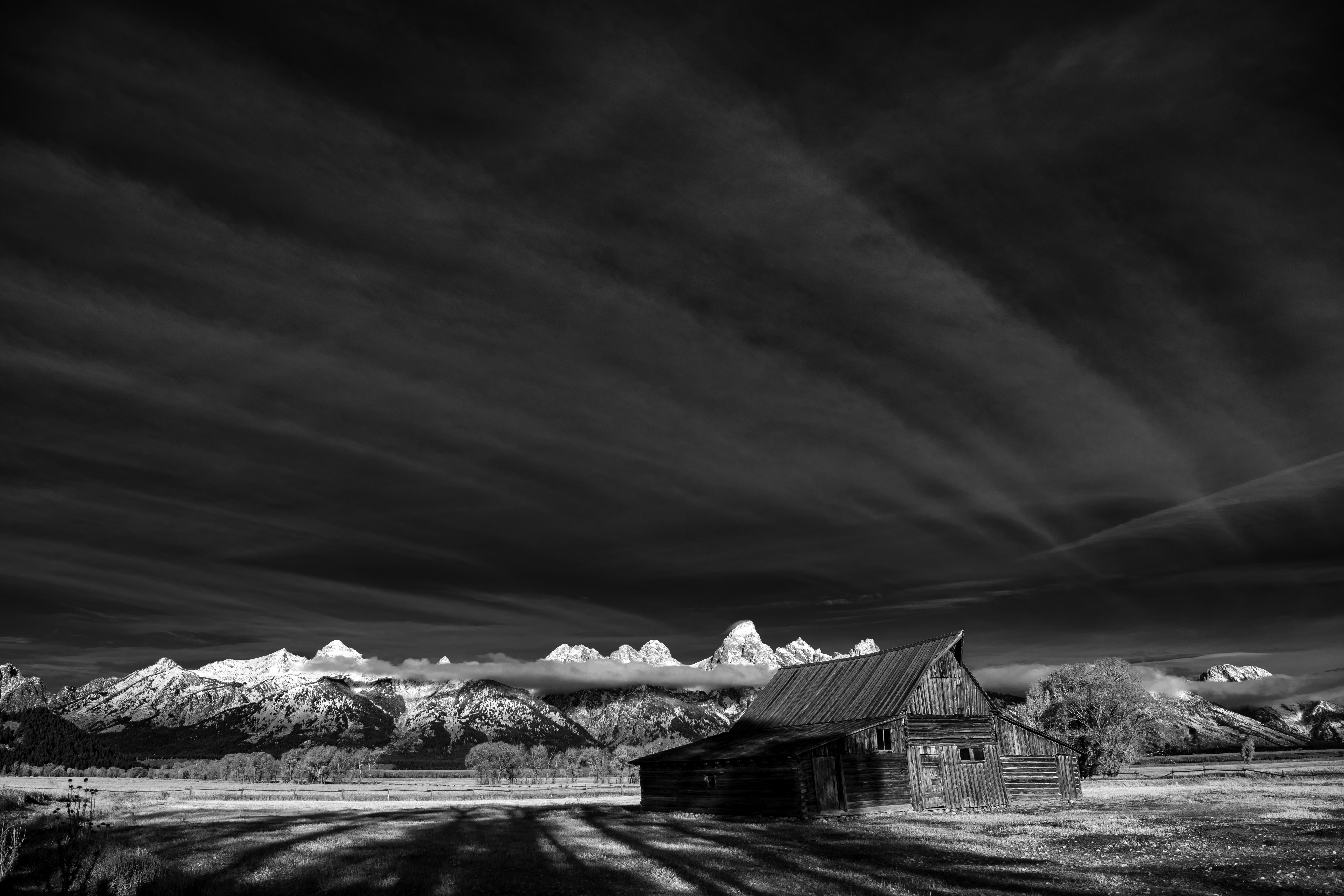 The Mormon settlement in the Grand Tetons dates back to the late 1800’s.  There are several barns and other outbuildings still in existence.  This is one of the barns, taken at sunrise, just as the sun highlighted Grand Teton, Middle Teton to its left, and Mount Owen to its right. 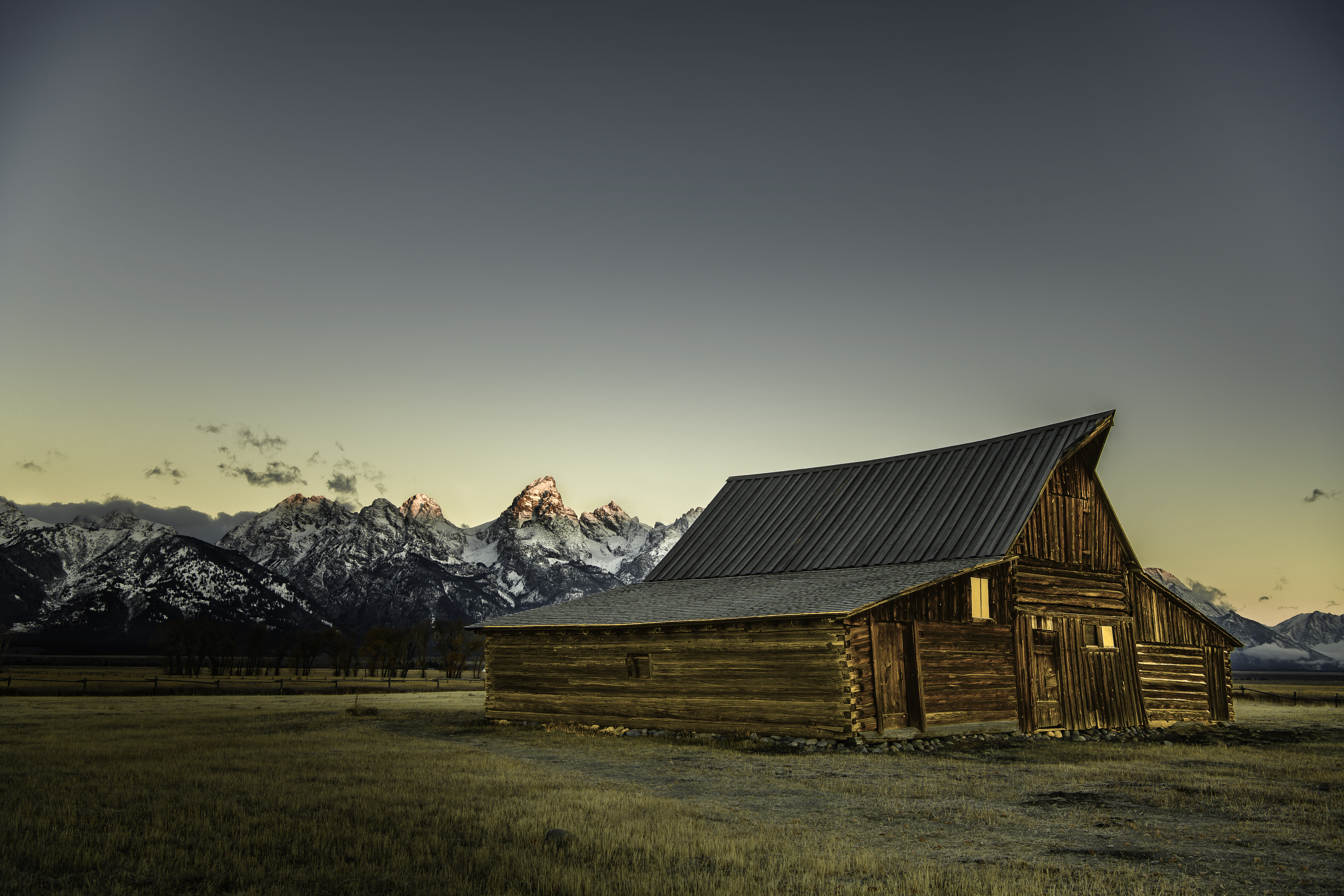 This Bison in Theodore Roosevelt National Park seems to be at home on the range. 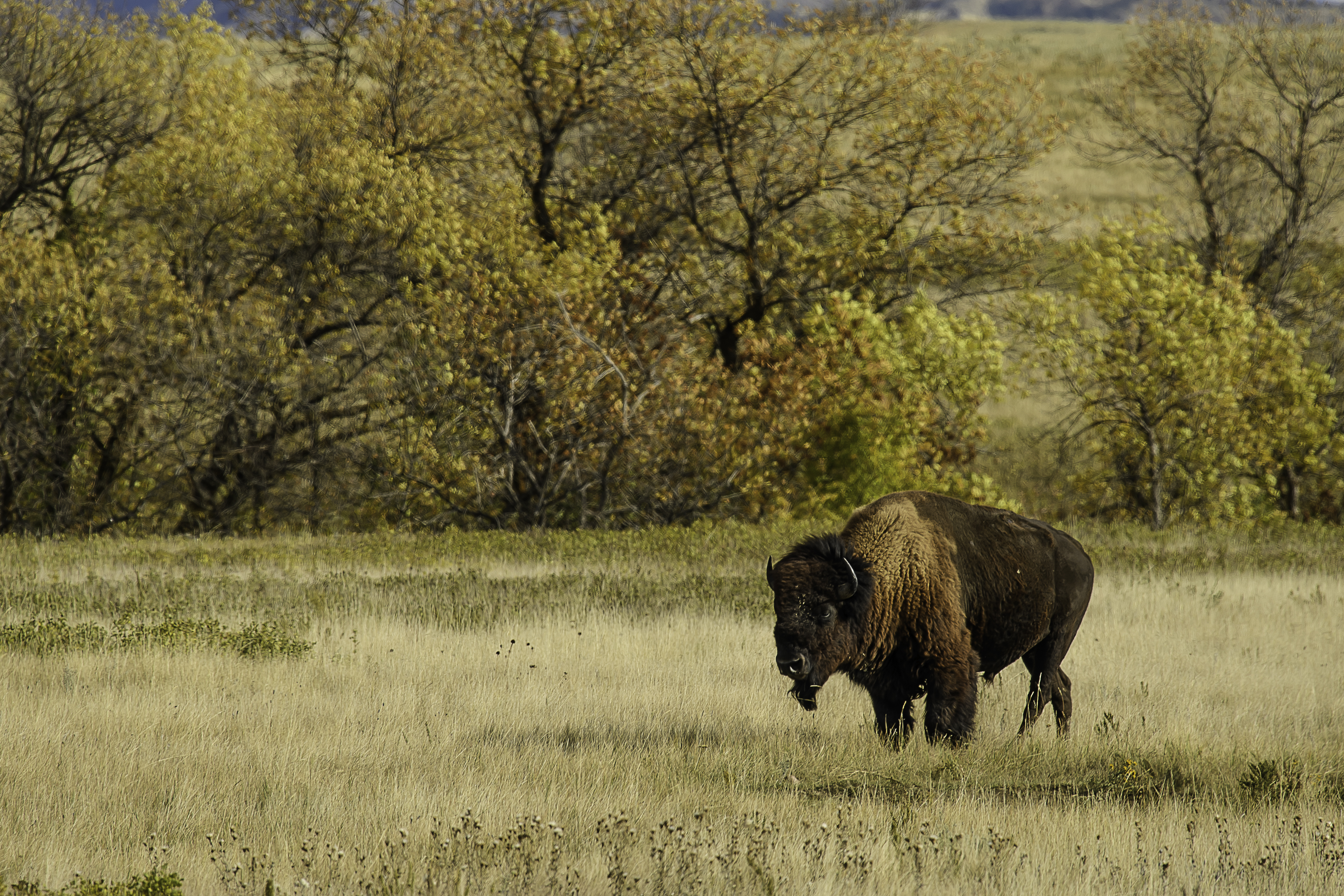 There were lots of threatening clouds looming on our first morning in Theodore Roosevelt National Park in North Dakota.  A few craggy peaks from the Badlands appeared in the distance at the edge of the prairie grasses.  As the clouds darkened the sky, the remaining afternoon rays highlighted the peaks and the orangey-yellow color of the prairie grasses almost glowed. 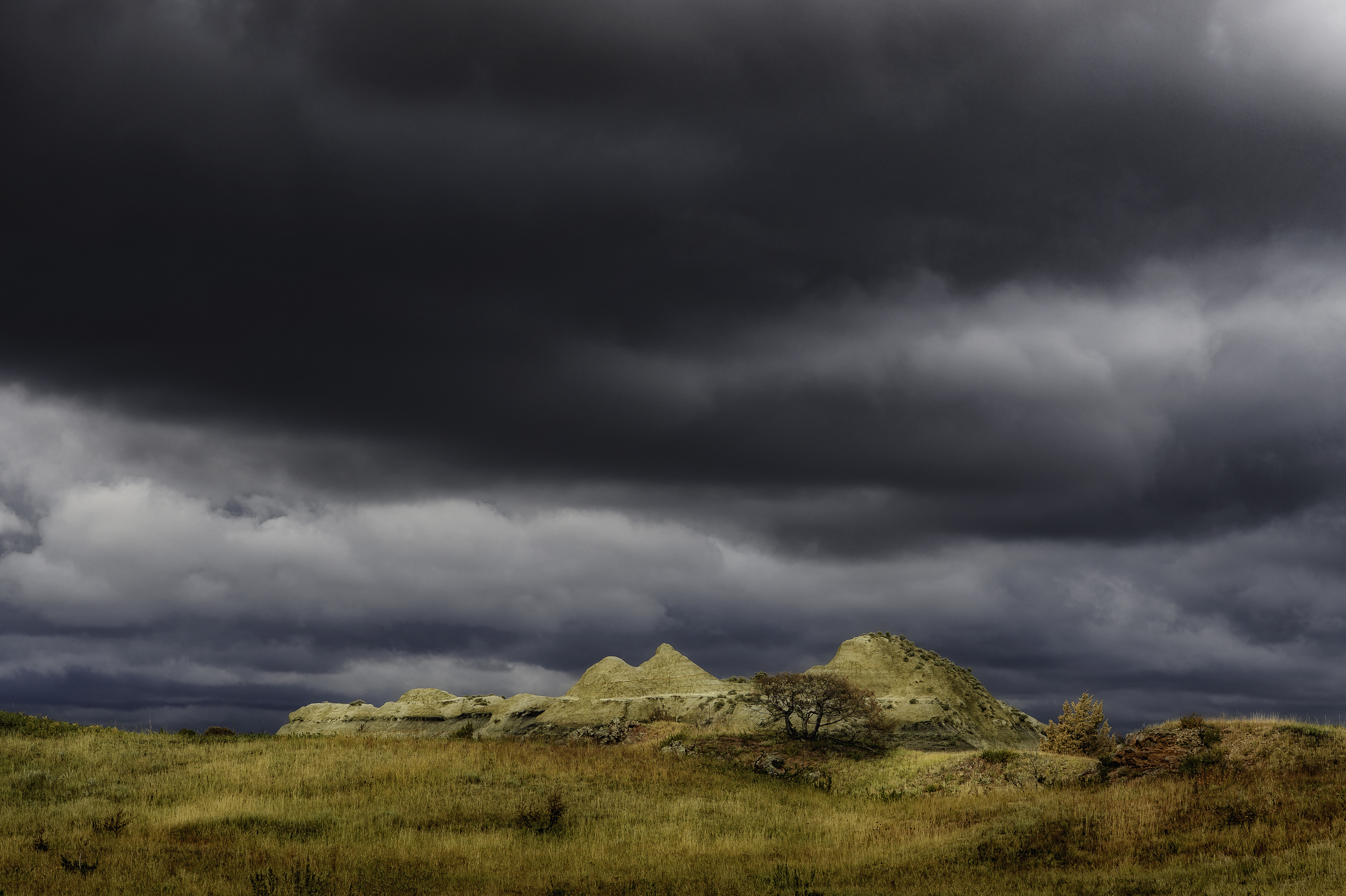 Mule Deer are so named because their ears are like mule’s ears…big.  Because they are so large, Mule Deer use them to advantage to alert them to danger that might be near them. Whenever we stopped our vehicle to photograph them in Theodore Roosevelt National Park, they were atuned to our presence and their ears acted almost like antennae moving this way and that to pick up on sounds that indicated whether they were safe or needed to run.  When they stood alert with their ears facing forward, they had an irresistably cute look about them.  This was a morning photograph, the sun still low on the horizon, creating a nice rim light around the deer’s ears. 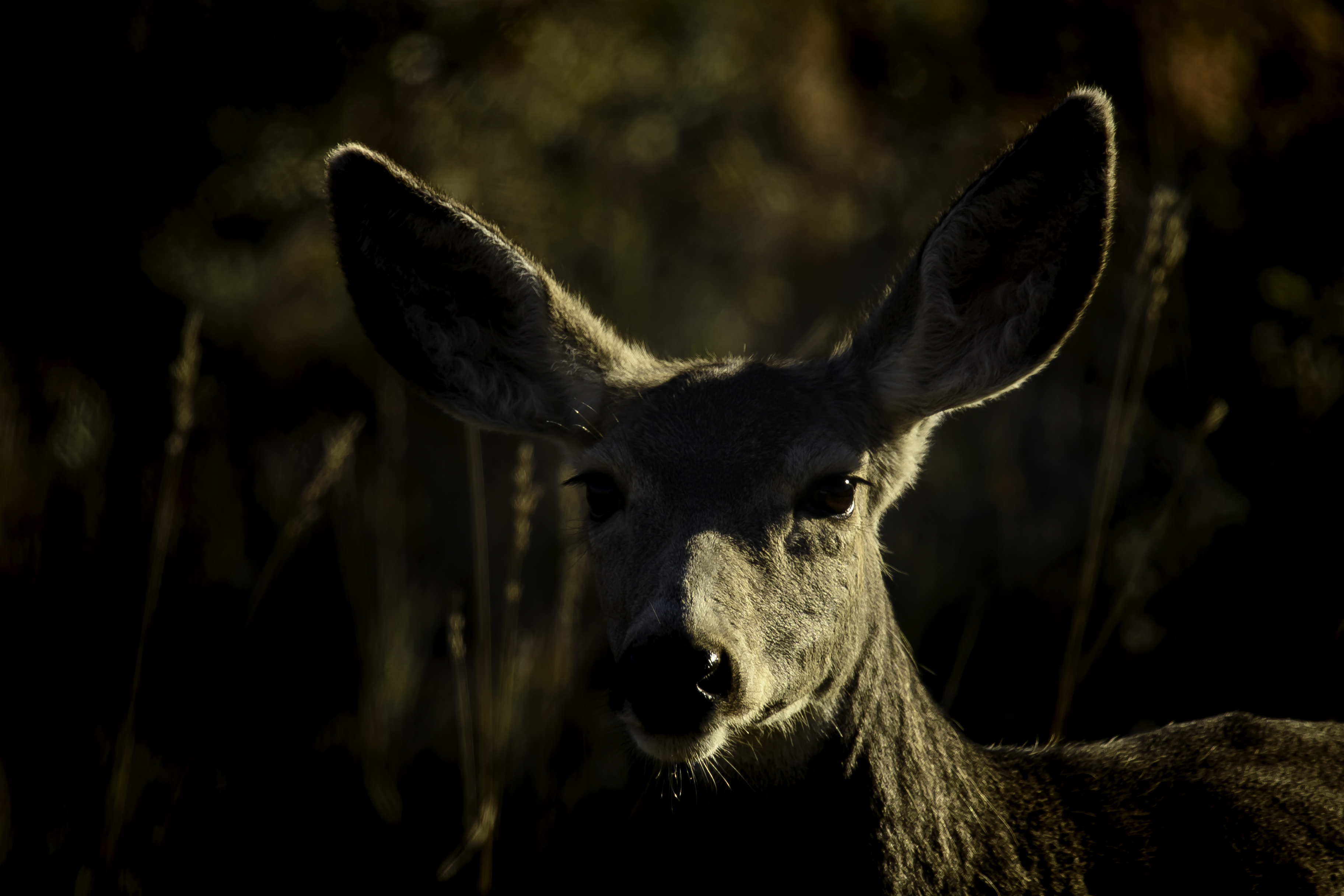 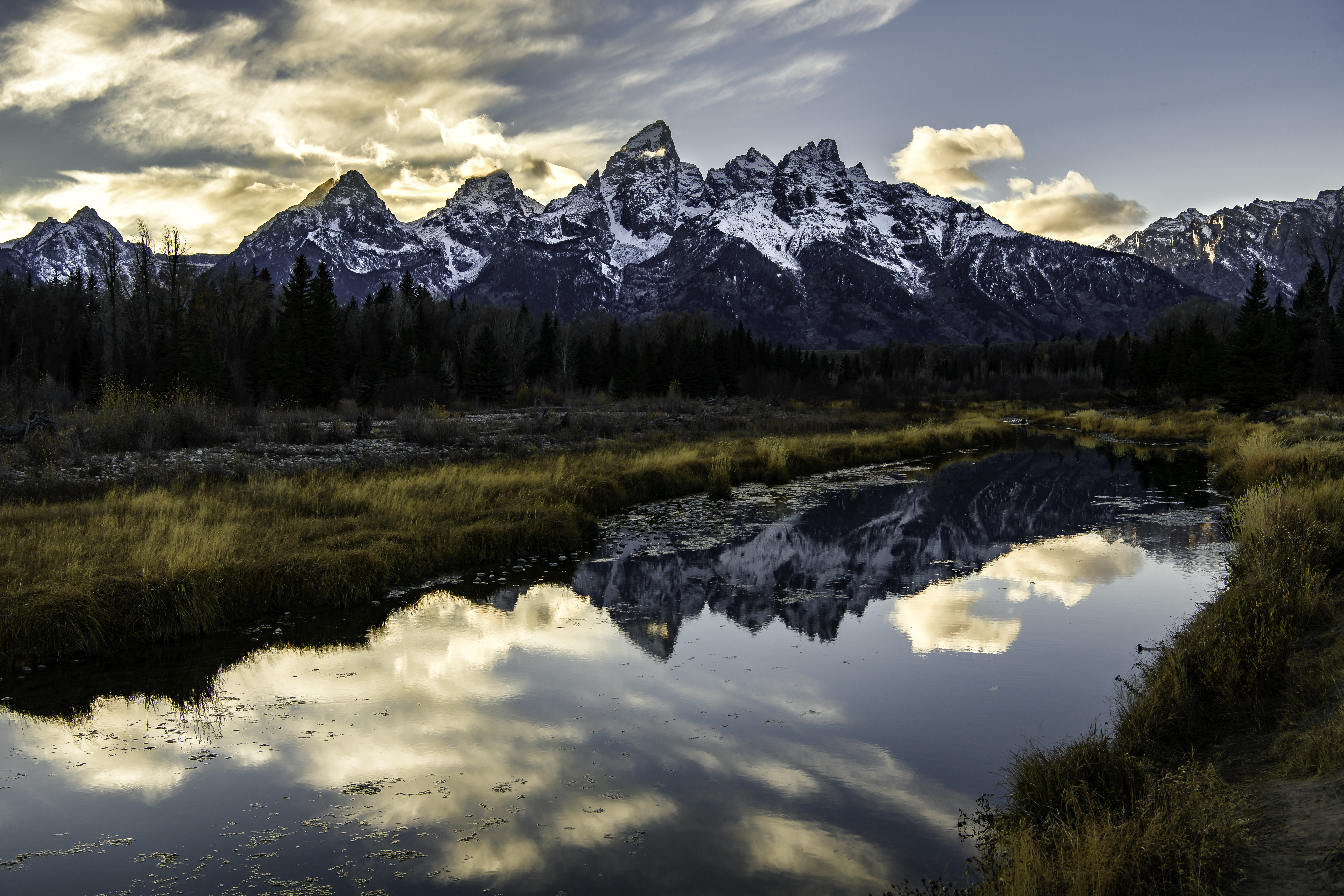 On Thursday, we drove to the dam at Jackson Lake.  The mountains were mostly obscured by threatening clouds but the sun breaking through and casting god beams onto the lake made a dramatic photograph that suggested the storm might be ending soon. 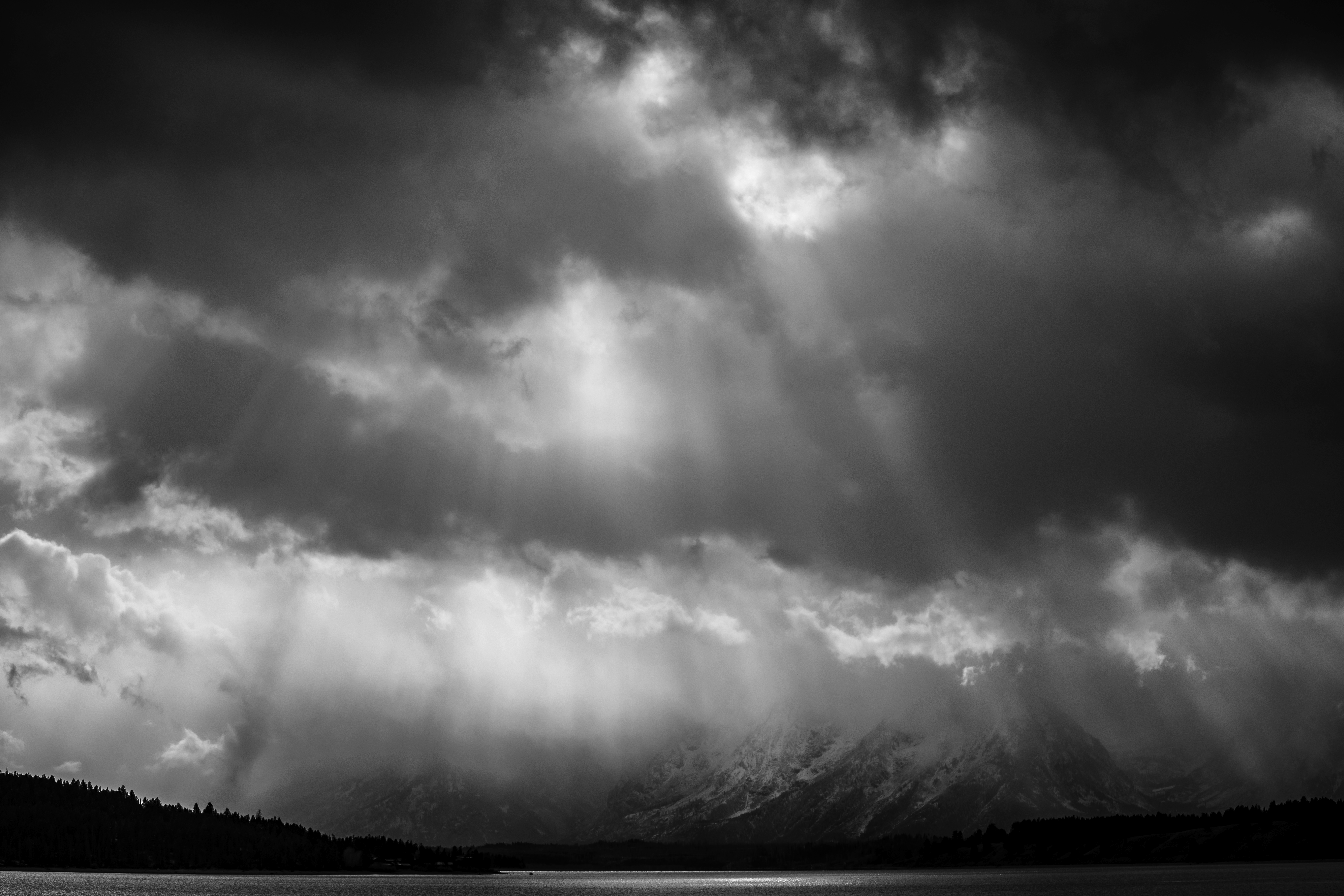 There is more to the Grand Teton Range than Grand Teton, Middle Teton, and South Teton.  The majestic peaks continue southward.  Here, in a view from a pasture in the historic Mormon Row District, from left to right, are Prospector’s Mountain, Albright Peak, Static Peak, and Buck Mountain.  The Trois Tetons and Mt. Moran are further to the right outside the frame of this photograph. 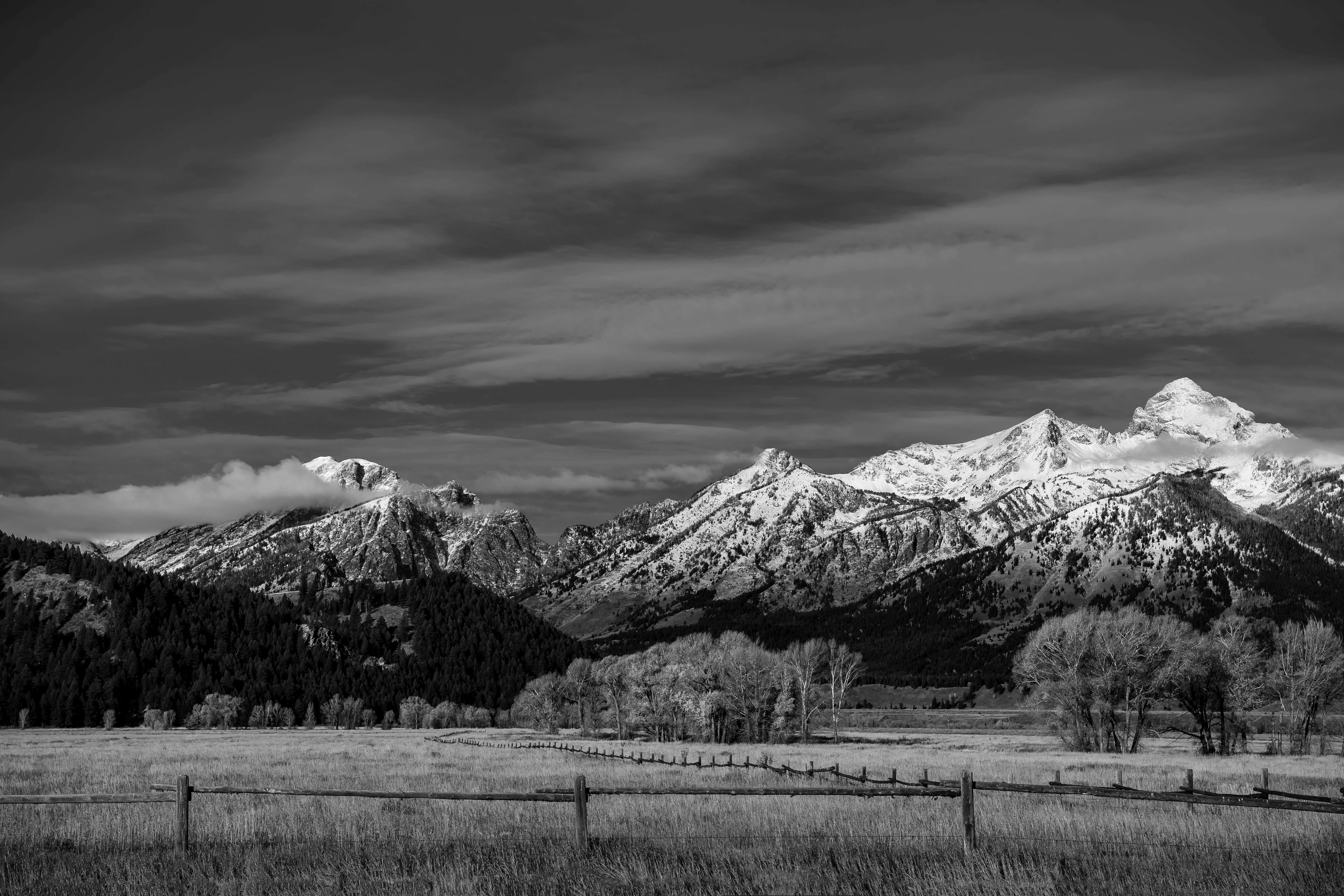 The unstable weather patterns this week brought snow, clouds, overcast, winds, rain, and even a patch or two of blue skies to the Grand Tetons.  It takes your breath away to see these magnificent mountains covered with snow and surrounded by clouds that swirl their mists around the craggy peaks.  Driving along Teton Park Road at the base  where they rise from the flat plains surrounding them, the mountains seem so close you feel as if you could almost reach out and touch them. 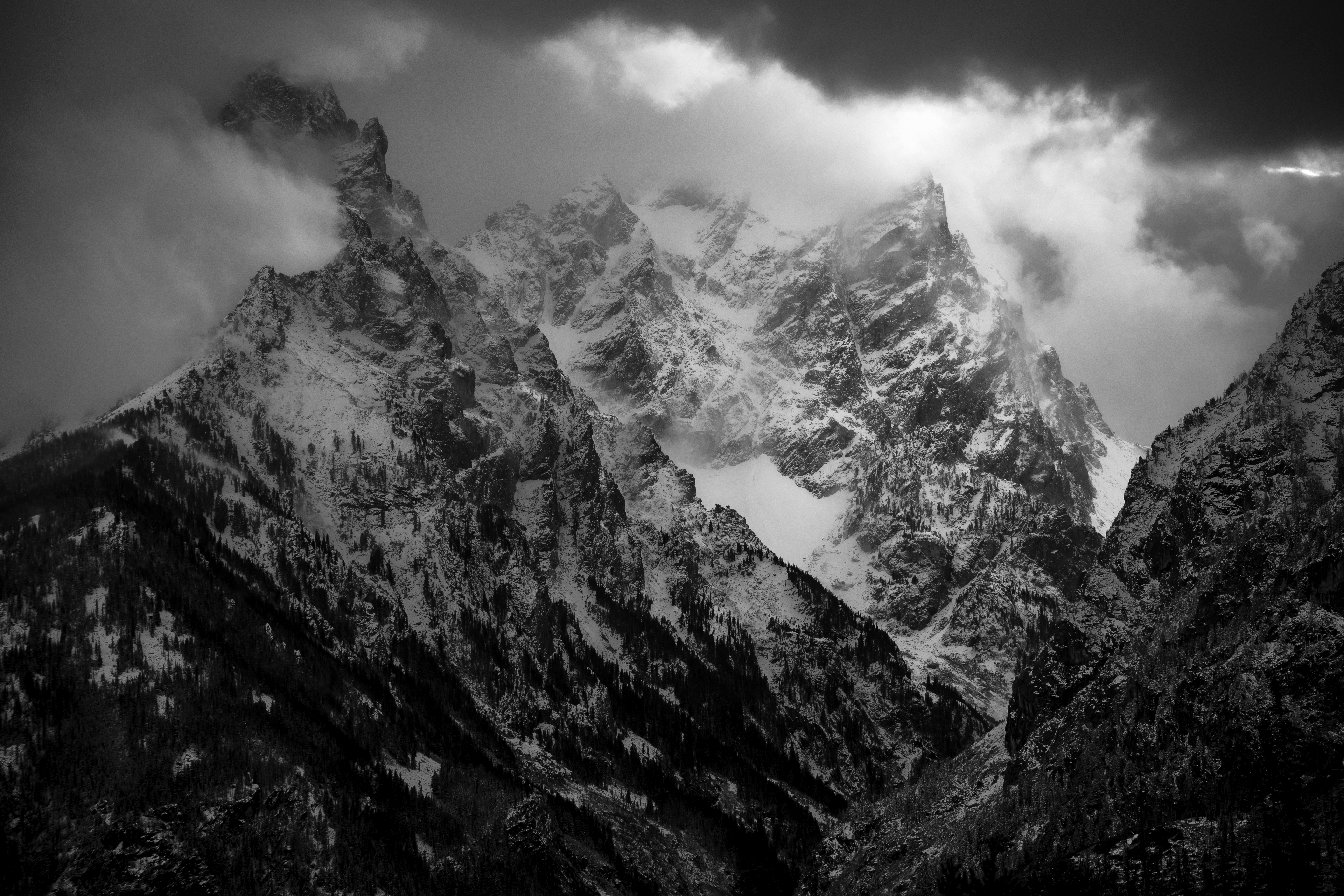 The Grand Tetons are a spectacular mountain range in the Rocky Mountain chain. Tuesday morning was a chilly 24° when we were out photographing these gorgeous mountains as the sun rose behind us.  Converting the photograph to black and white makes the vista even more spectacular. And, a dusting of snow from the night before added to their beauty.  They are, indeed, grand! 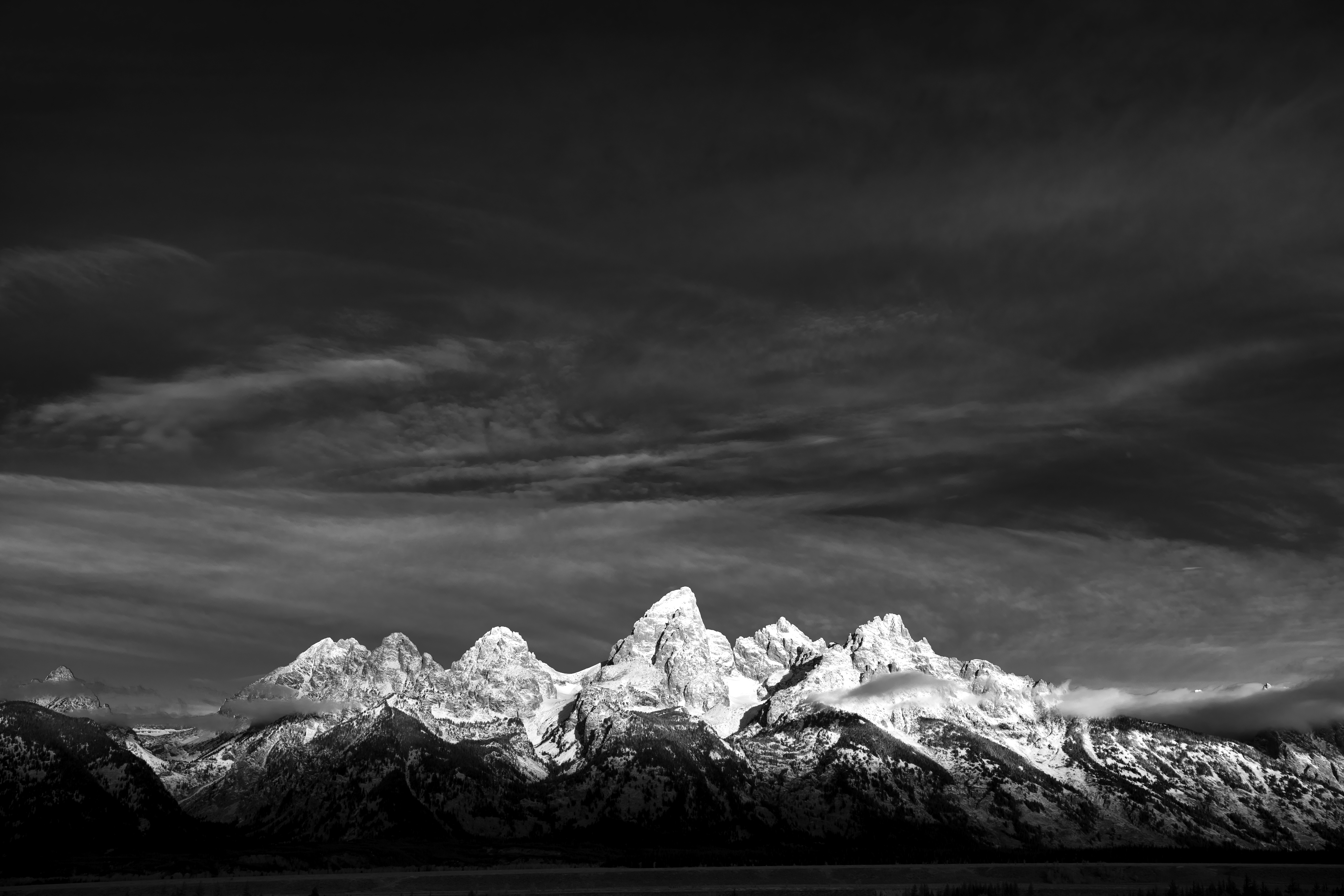