We’ve all  heard about Rosie the Riveter, the World War II icon who represented the female defense plant and shipyard workers who stepped in to fill the void when the men left for the battle front.  These amazing women showed that they were every bit as capable as men in building airplanes. tanks, and ships.

During my recent visit to Florida to work on the Normandy Bound Project I got to see firsthand the craftsmanship exhibited by those dedicated women.  One of my assigned tasks was to scrub the underbelly of the C47 in preparation for repainting.  I was able to admire the rivets punched into the metal fuselage of the C47 more than 75 years ago.  I couldn’t stop thinking about Rosie the Riveter while I scrubbed.  A few Rosies are still alive today.  They are in their 90’s now but some are still vibrant and sassy as this 2017 American Veterans’ Center interview with Mae Kreier, a Rosie who worked at an aircraft plant in Seattle, shows.  Mae  was instrumental in creating a day of national recognition for all the Rosies, which now takes place on March 21st.

Here is a view of some of the rivets on the underbelly of the plane, along with a few nuts and bolts.   I used my 8-15mm lens which was not really the correct lens to use for this shot because of the distortion.  I decreased some of the distortion in Adobe Camera Raw and used Nik Silver Efex Pro 2 for effect.

Moose Peterson is working on a documentary for the Normandy Bound Project so he took lots of photographs during the few days we were there.  He took this shot of me as I cleaned some of Rosie’s rivets. 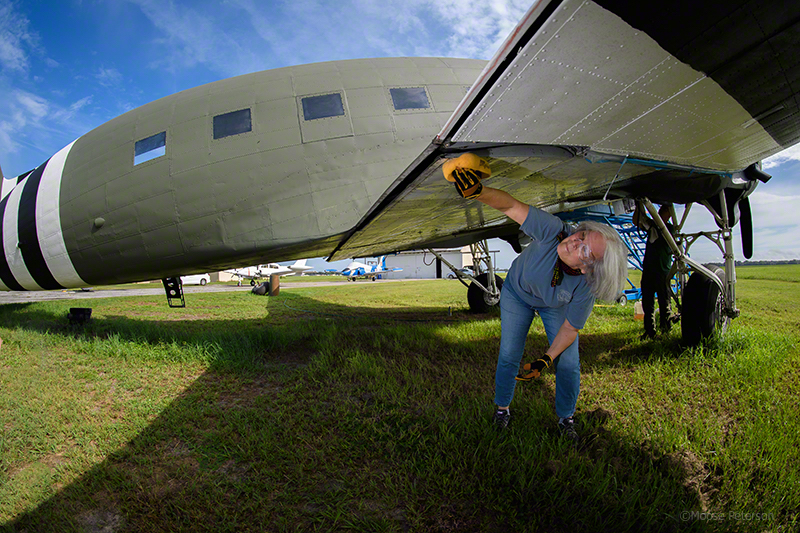