At noon Thursday, I heard the sound of a helicopter circling the neighborhood.  This has happened on numerous occasions, almost always when a child is missing.   I noticed that this helicopter was a California Highway Patrol helicopter, not a county helicopter.  Always on the lookout for a photo-op, I changed lenses and went outside.  I took several shots, then strained to understand what the officer was saying over the copter’s  loudspeaker.  I have never been able to understand everything that is said because the transmission is usually garbled because of the sounds of the rotary blade and they seem never to repeat it.   So I continued to take photographs.  Law enforcement agencies in this area are on particularly high alert because on Wednesday, a Sacramento County Sheriff’s deputy was mortally wounded and two CHP Officers were shot by a car theft suspect in a neighborhood where I used to live.  It is my understanding that there may be additional suspects.  When I did manage to pick up a few of the words from the loud speaker, I immediately went inside.  The words I heard were, “we’ll send the canine units in after you.”  It was then that I realized the first announcement had said something like “stay inside and lock your doors.”

The first few photographs I took showed the blades of the helicopter stopped, with no motion blur.  As with the wings of a hummingbird, a little motion blur is a good thing.  So, I changed my settings to ISO 100, f/16, and a shutter speed of 1/125 to get a blurring of the rotors.  I should have slowed the shutter even more to get a complete circle of the rotor.  But by then, it was too late.  The helicopter had moved further away from my house.  I heard sirens screaming down the street behind my house just a few minute ago but unless this turns out to be a big deal, I will probably never  know the reason for the CHP’s visit.  However, I’m pretty sure it wasn’t a rescue mission, despite the words on the belly of the helicopter. 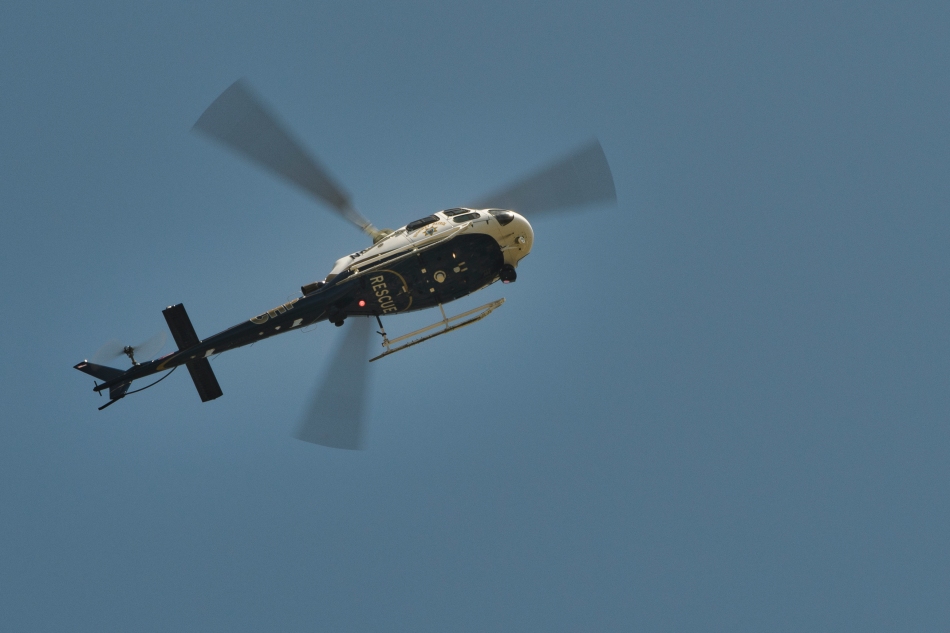