I’ve been feeling frustrated and helpless watching the devastation from Hurricane Harvey unfold in Texas.  One moment I’ll see photographs and hear accounts of places I know and love in Port Aransas and they’ll be good reports.  The next minute I’ll see photographs of another place I love and it will be completely destroyed.  Being 2000 miles away makes it difficult to do anything to help.  Since my Blood Type O+ makes me a universal donor, I decided to donate a pint of blood.

It’s not quite as easy as walking in, having a needle inserted, and dribbling out a pint of blood.  That’s a good thing.  First I had to be poked to determine if I had enough iron in my blood to make a donation.  In the past I’ve barely squeaked by.  This time was no exception.  But for me, that’s also a good thing because hemochromatosis, also known as iron overload disease, runs in my family.  One of my brothers has it, my cousin died of it, and a cousin once removed has it.   While I was reading the detailed blood donor information I came across references to European travel cautions during certain periods  because of mad cow disease.  Wait a minute.  I was in France just three years ago.  Uh oh.  But, I only skimmed that page, so I overlooked the dates of the scare and the length of time  one needed to be in the affected areas.  Since I didn’t spend any time in suspect nations in the years of the mad cow scare, I didn’t have anything to worry about.  Then I had to answer about 40 questions about all aspects of my life that might have some impact on my blood.  I was breezing through the questions until I came to number 14.  “Have you ever had a bone graft or organ transplant?”   Well, yes, just a month ago I had a bone graft in a dental procedure.  Stop everything!  Bone graft?  Can’t give blood for a year.  I guess that after a year, any of the horrifying conditions that might develop from said bone graft would have manifested themselves, further disqualifying me.

So, unable to donate blood, I gave away some of my airline miles to Angel Flight West.  My donation probably won’t get to Texas but my blood probably wouldn’t either.  But, at least someone might benefit.  I hope so.

The slightly crazed-looking cow is from Costa Rica a couple of months ago. 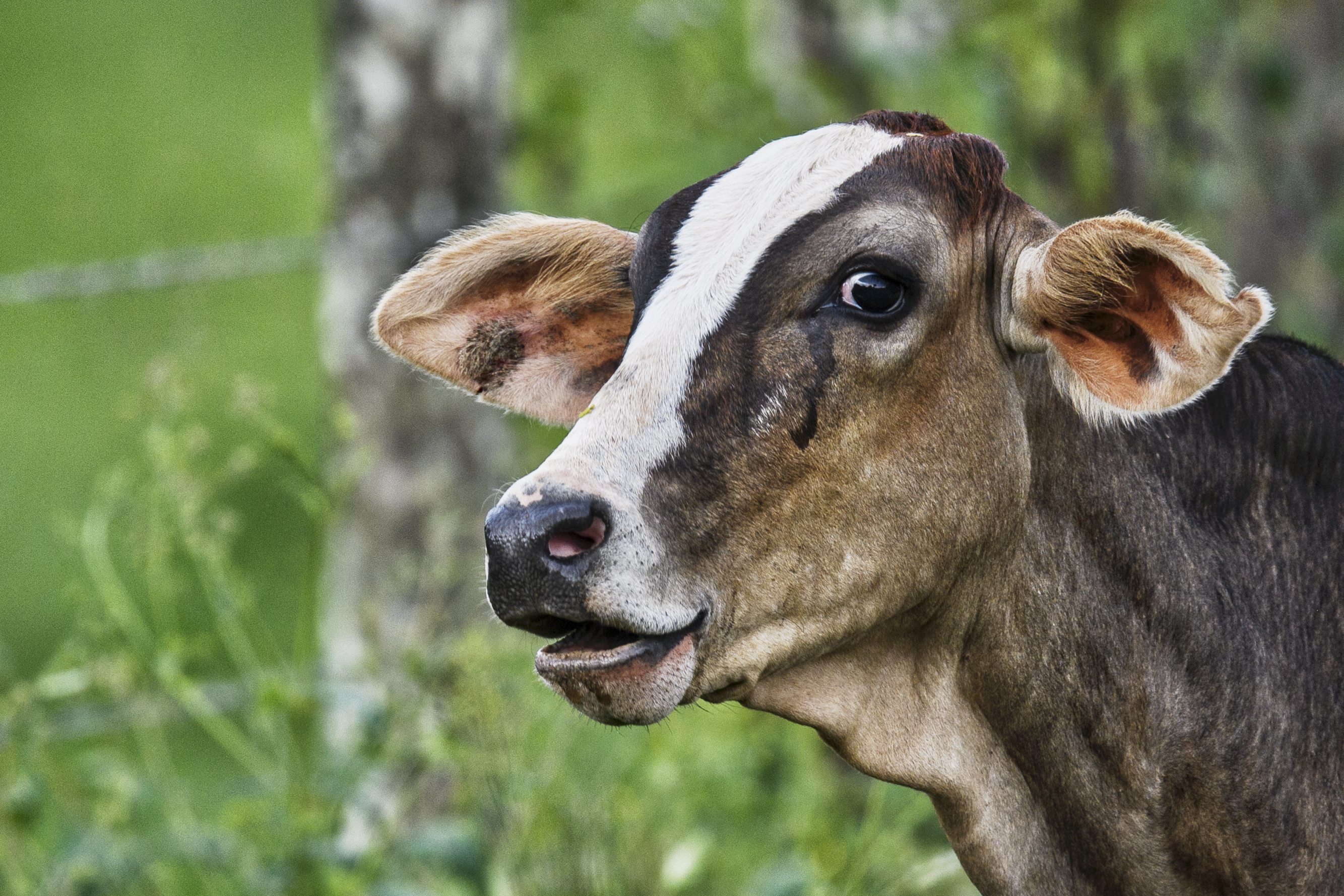 All the news reports about catastrophic flooding and hurricane damage in the areas of Texas I visit regularly have made me wonder about the survival of the birds in the region.   This Great Egret had to delicately balance atop this unwieldy shrub on High Island on the Bolivar Peninsula on the Texas Gulf this past April.  I can’t imagine how it coped with high winds and flooding. 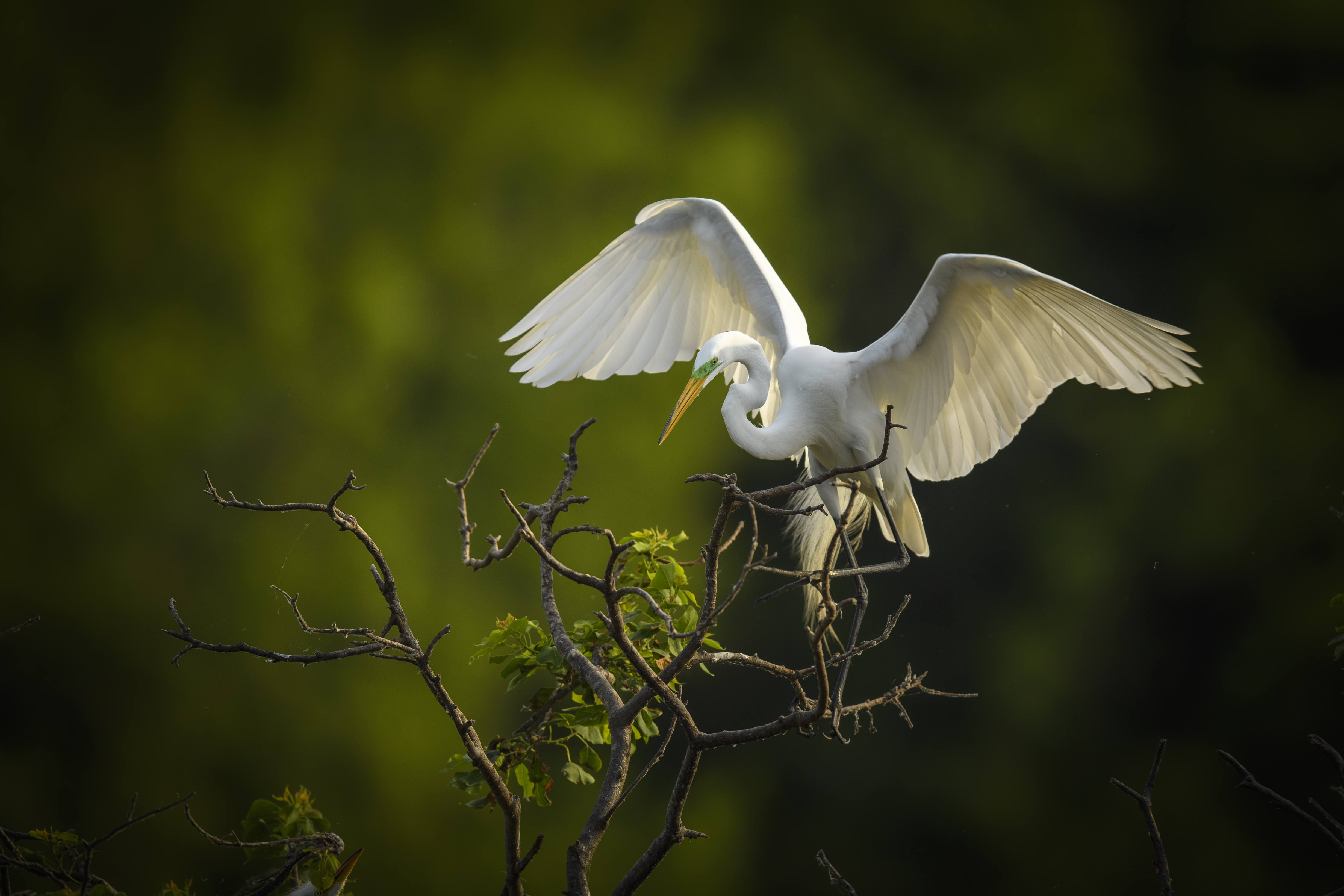 As I was driving to my second dental appointment of the afternoon on Monday, I watched the temperature, registered by my car’s thermistor, rise from 109° at my house to 113° when I finally parked in the shade 40 minutes later at my dentist’s office near the American River.  As I drove, the temperture fluctuated, reaching 118° a couple of different times.  I’ll fight anybody who says global warming isn’t real!  I do realize that the temperatures registered by my car are influenced by the temperature of the asphalt roadbed.  The more accurate temperature recorded by official weather stations was 109° at my dentist’s office and 108° at my house.

I’ve been thinking about Haines, Alaska since yesterday when someone at my camera club made a presentation about photographing bald eagles there last November.  Afterwards, I came home and went through some of my Haines photographs.  My visit to Haines in December 2015 was cold and snowy.  With the current heat wave, and similar highs expected for the remainder of the week, I wouldn’t mind setting a snow-booted foot back there.  This is a view of the Chilkat River taken from the Haines Highway.  Somehow, it gives me a vicarious cool! 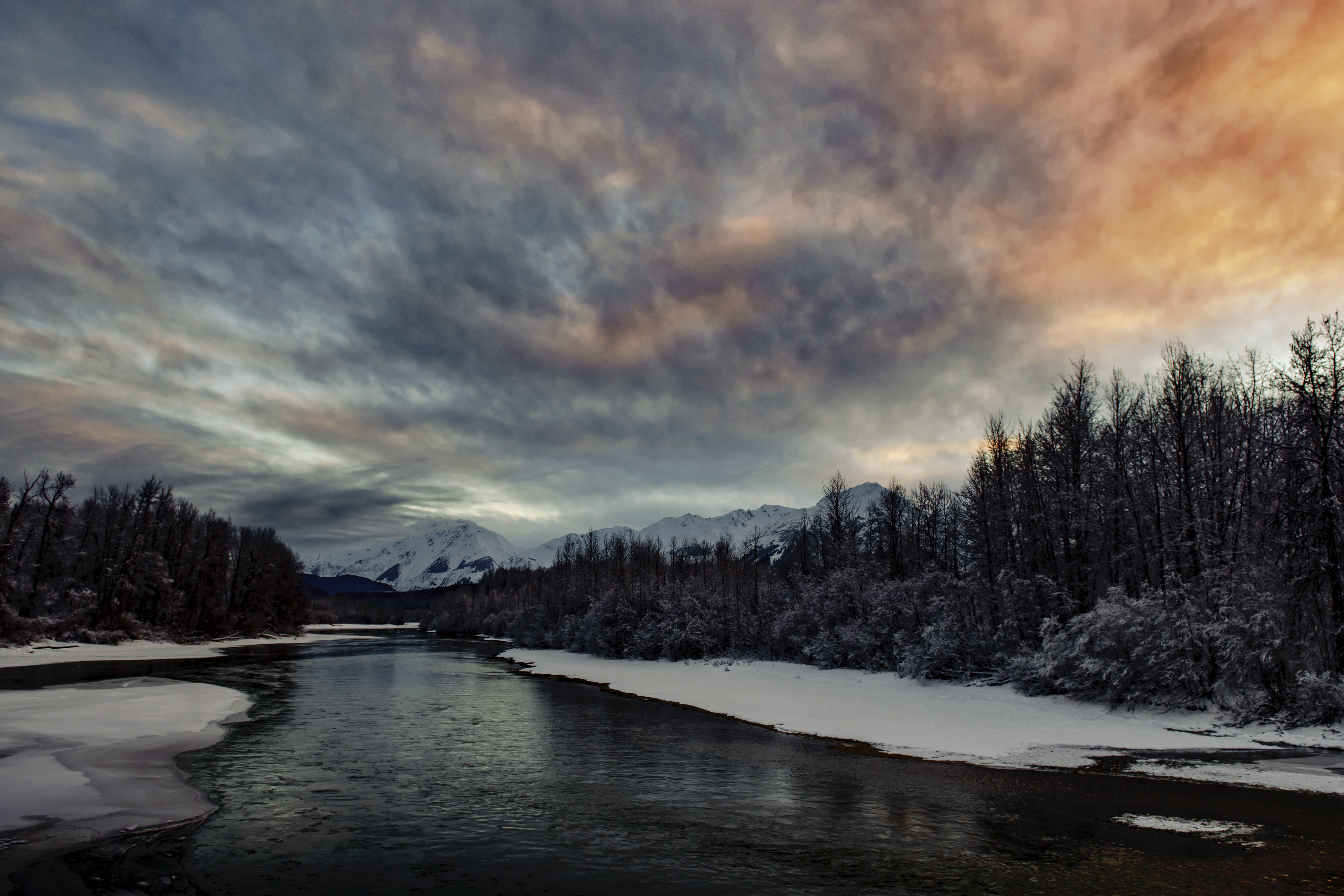 Two years ago when I brought this Judy Garland tree rose home from my Mom’s house (it was in a pot) I posted a shot (click here) of it.  Sunday morning, the sun focused on a single rose on the tree and I captured this.  Two years ago, I used a macro lens and focus stacked a number of images.  I took this single image with my 24-120mm lens on the D500.   Within less than a minute, the sun moved and the gorgeous light was gone.  (ISO 100, f/9, 1/50ss)  The two images, one using a macro and combining several images, one a single image, are remarkably similar even though I used entirely different photographic techniques to take and process the images.  However, I think I prefer this image because it seems more dramatic. 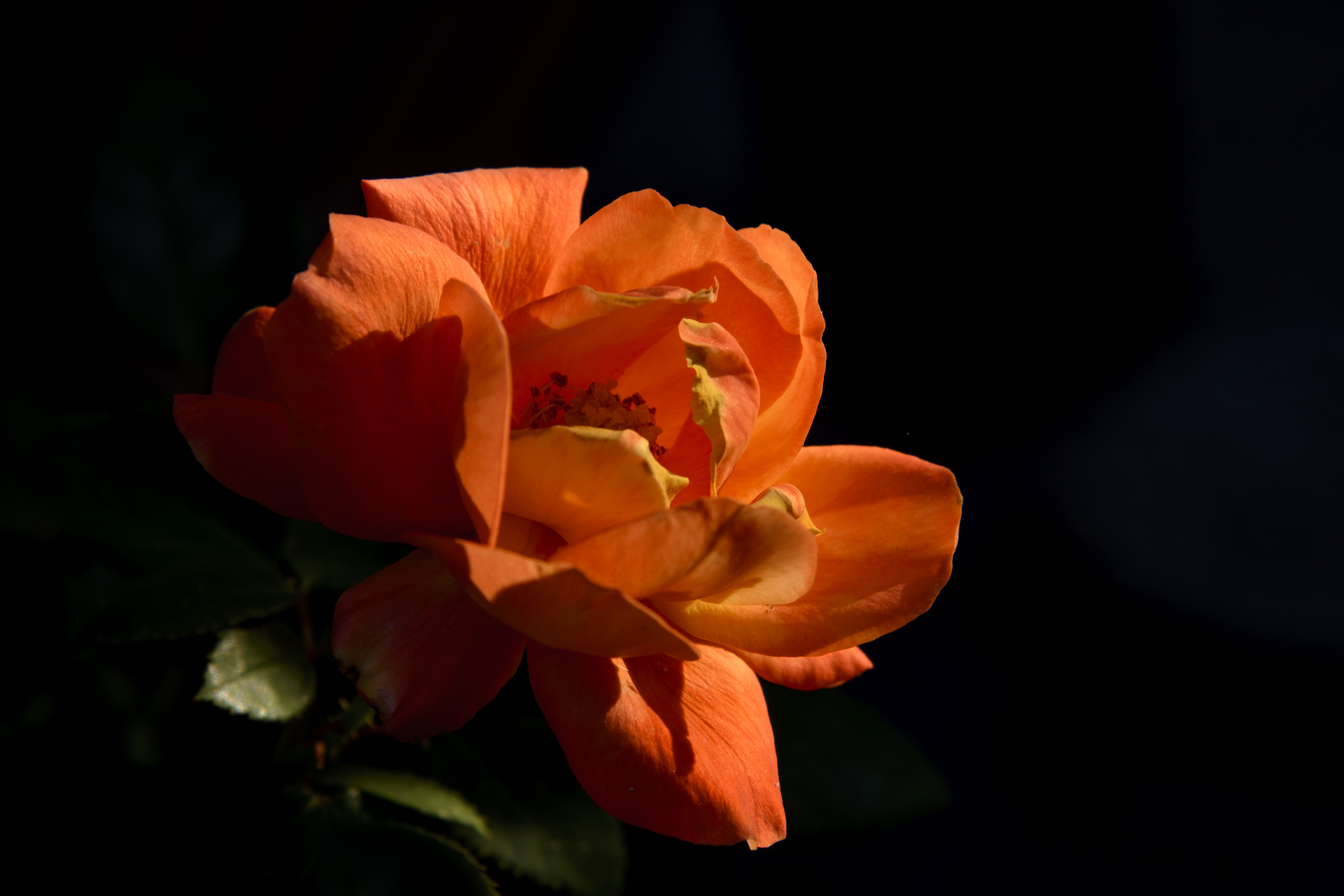 Hurricane Harvey has devastated Port Aransas, Texas where I have visited every year for the past ten years.   It’s been difficult to get news accounts about Port A because  access to it is limited because the ferry on Highway 361 has ceased operation and debris on the road from Corpus Christi has prevented access.  Saturday evening I finally saw some video from Port A which shows it hasn’t been leveled but lots of the familiar streets and businesses aren’t recognizable.  I don’t know if I’ll be able to make my annual visit next January. Time will tell.

Here are a few shots I took from the Jetty Boat on the way to St. Joe’s Island this past January.  St. Joe’s was also hard hit. 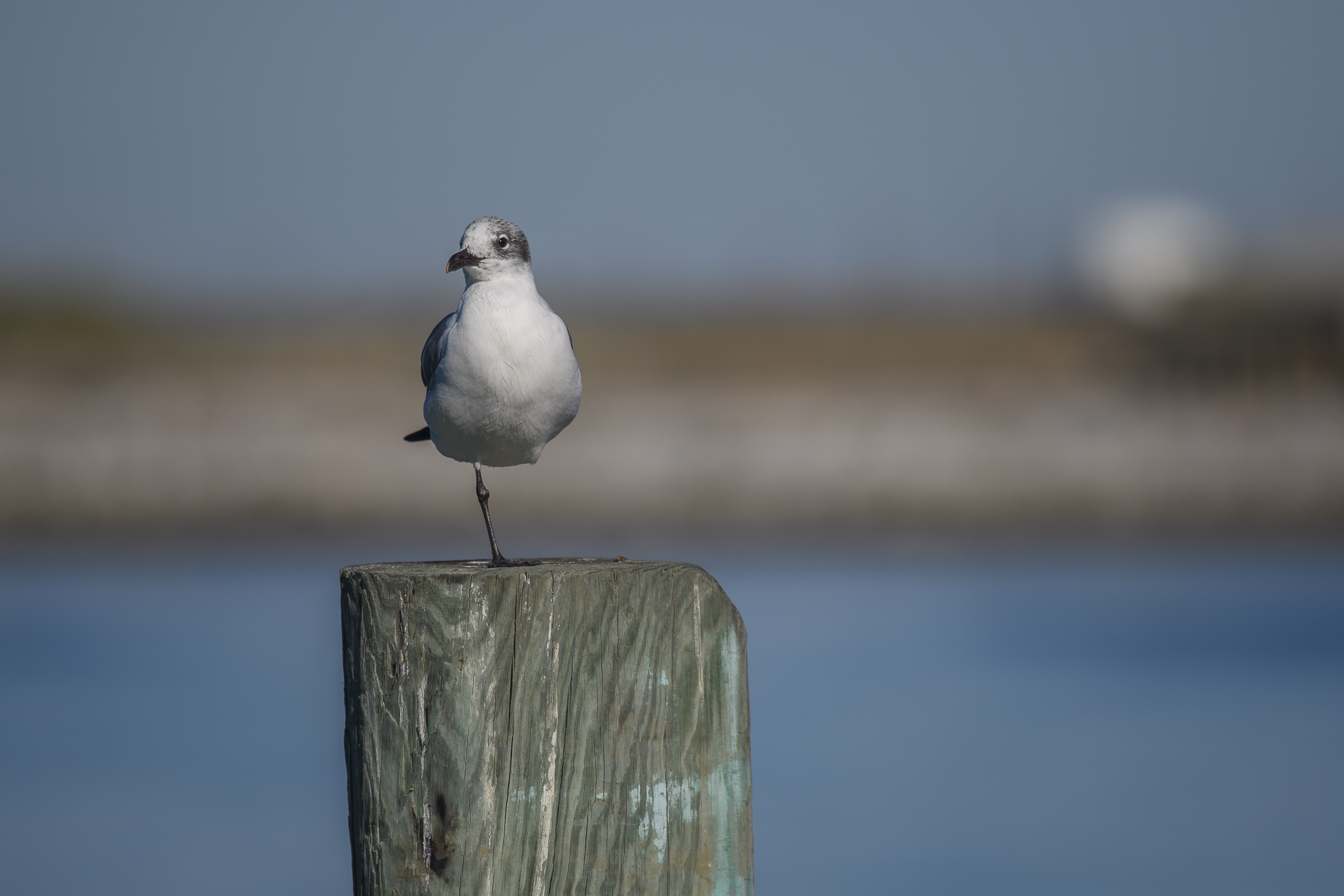 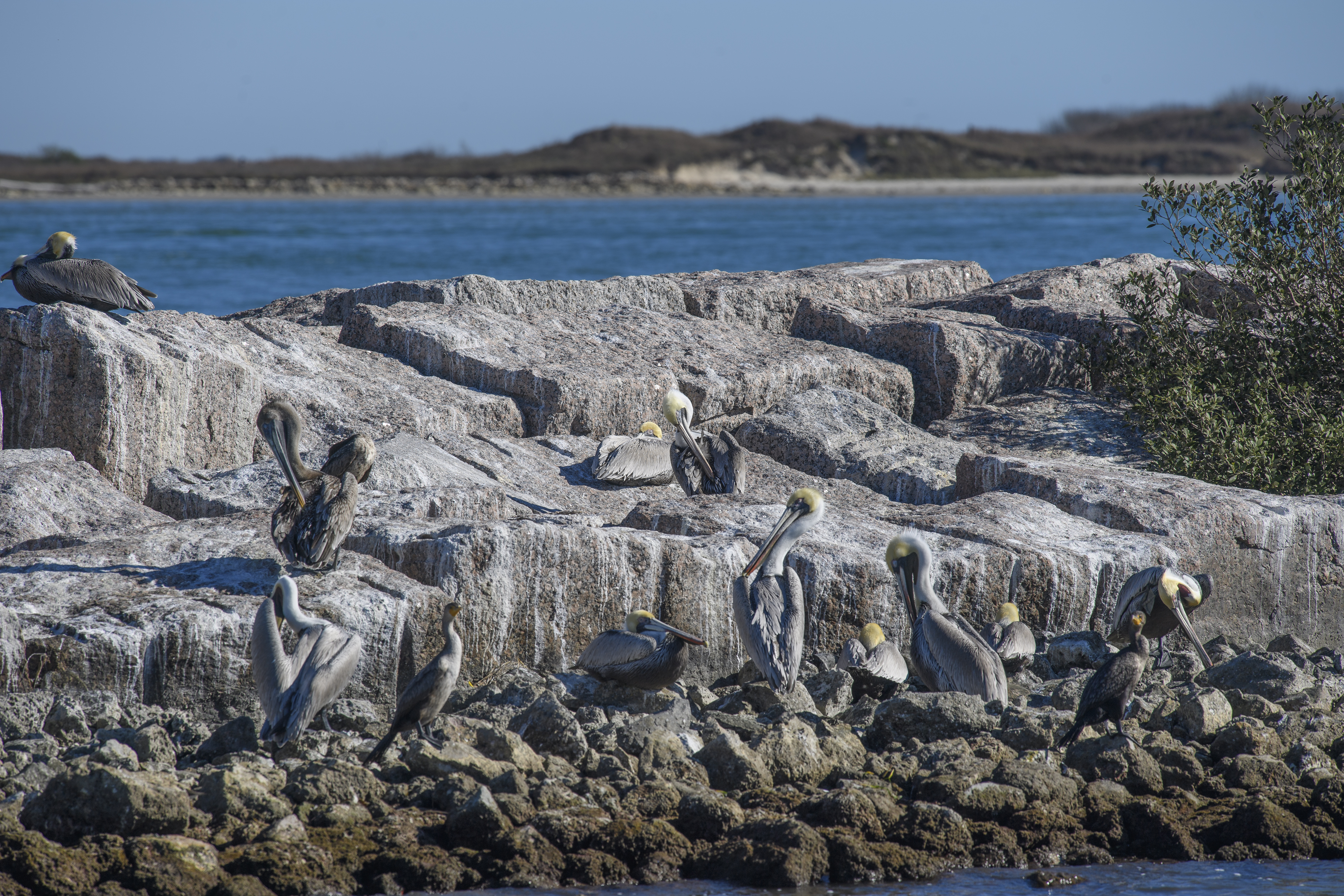 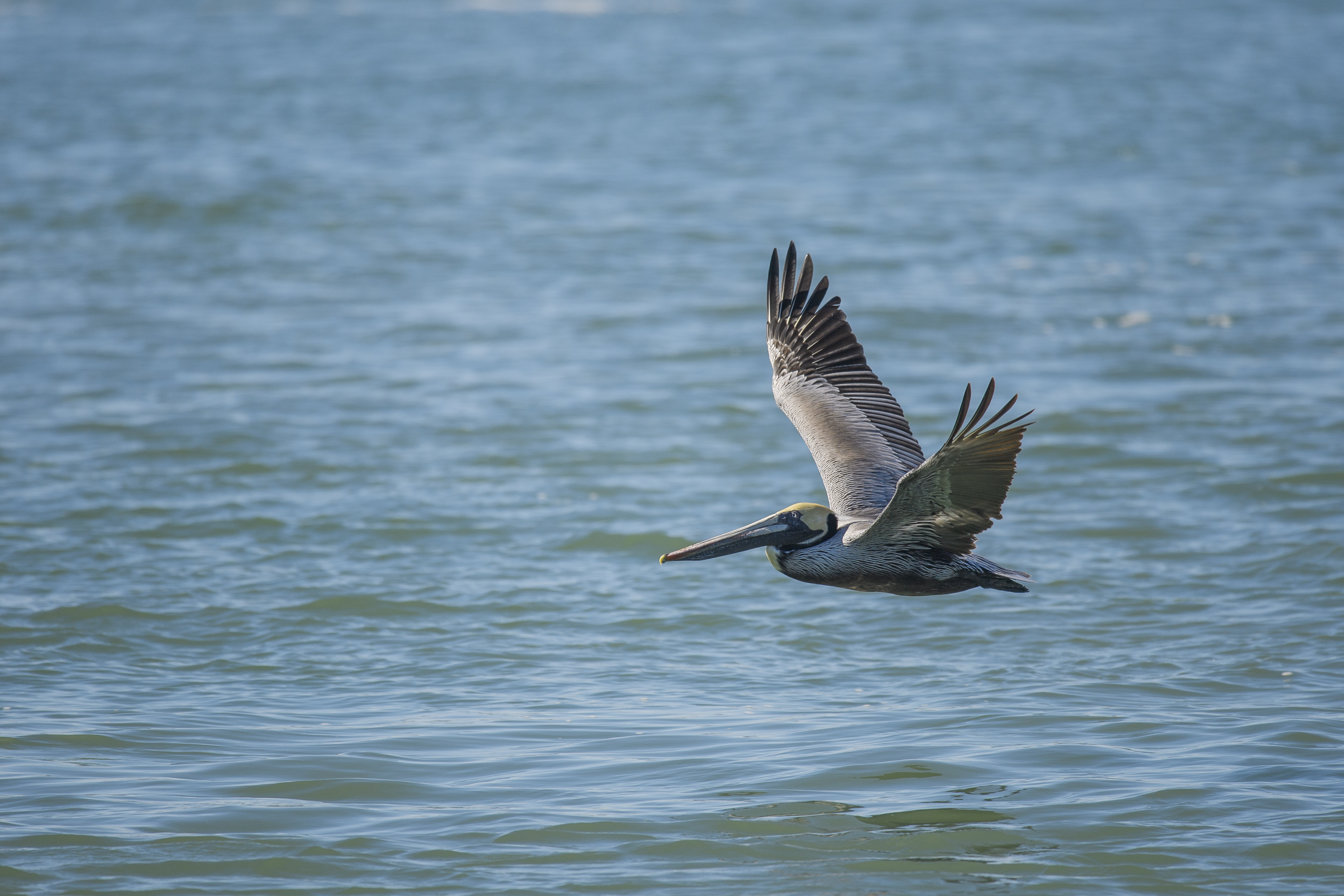 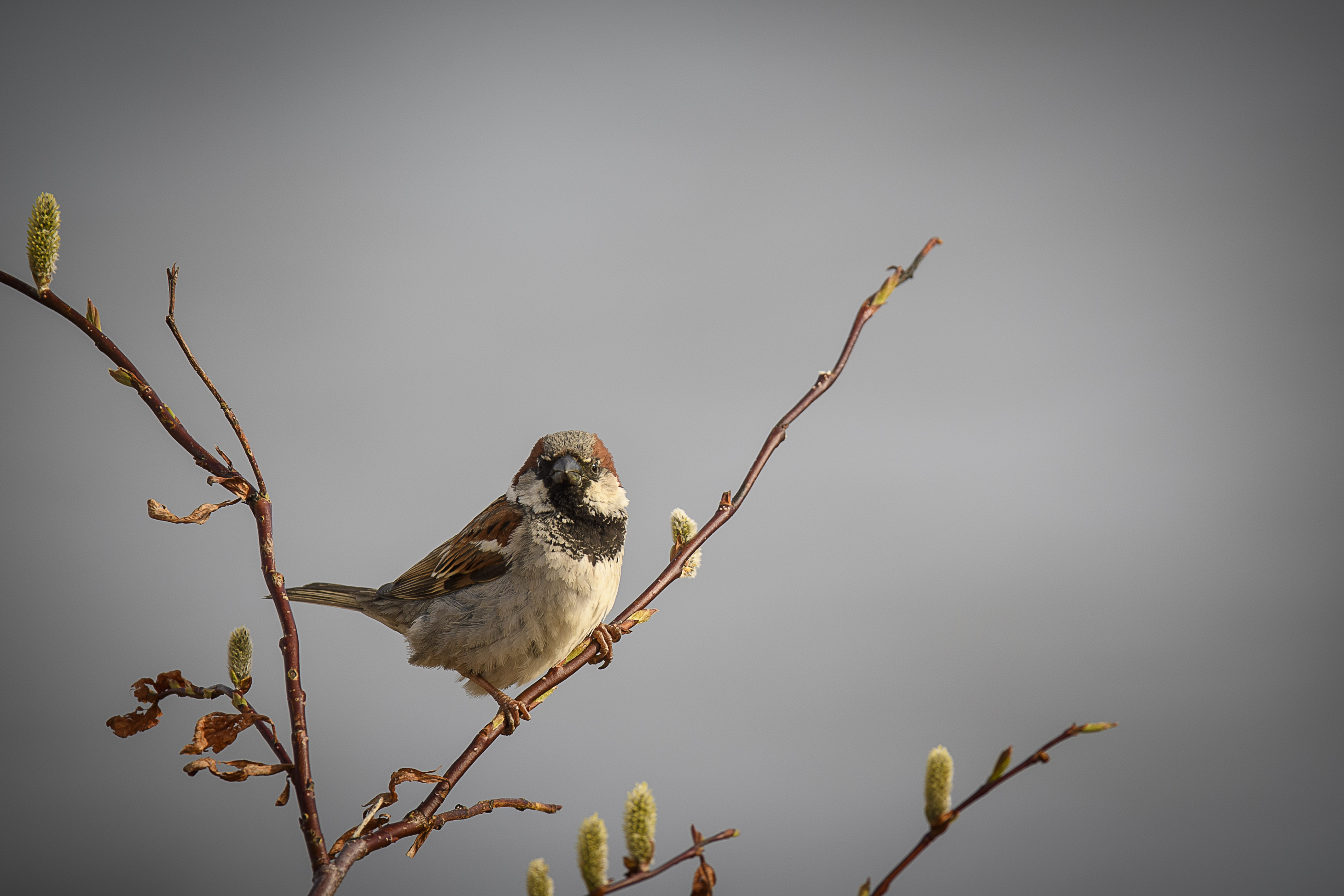 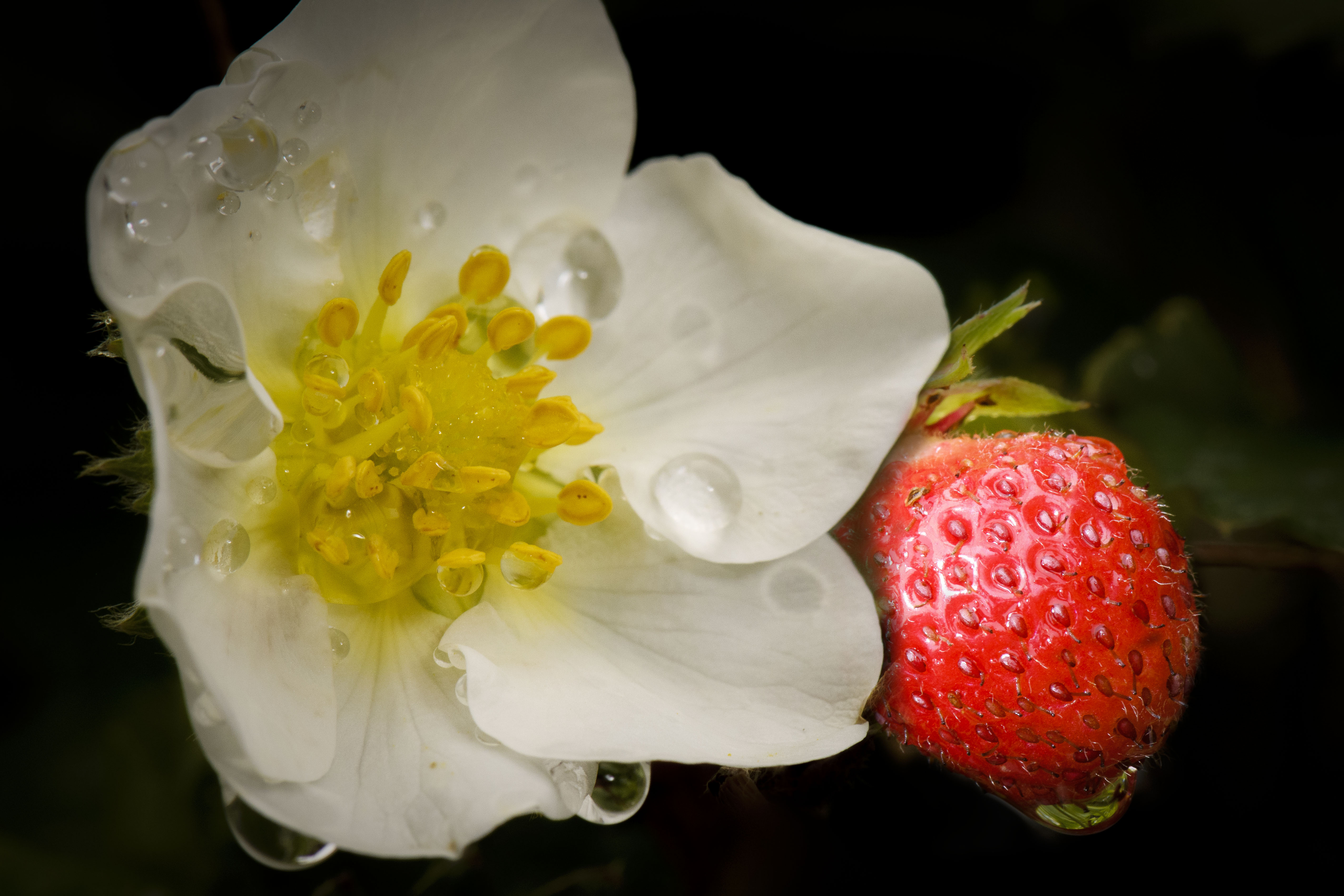 This Tri-colored Heron seems to be heading somewhere with purpose.  Taken near Ft. Myers, FL. 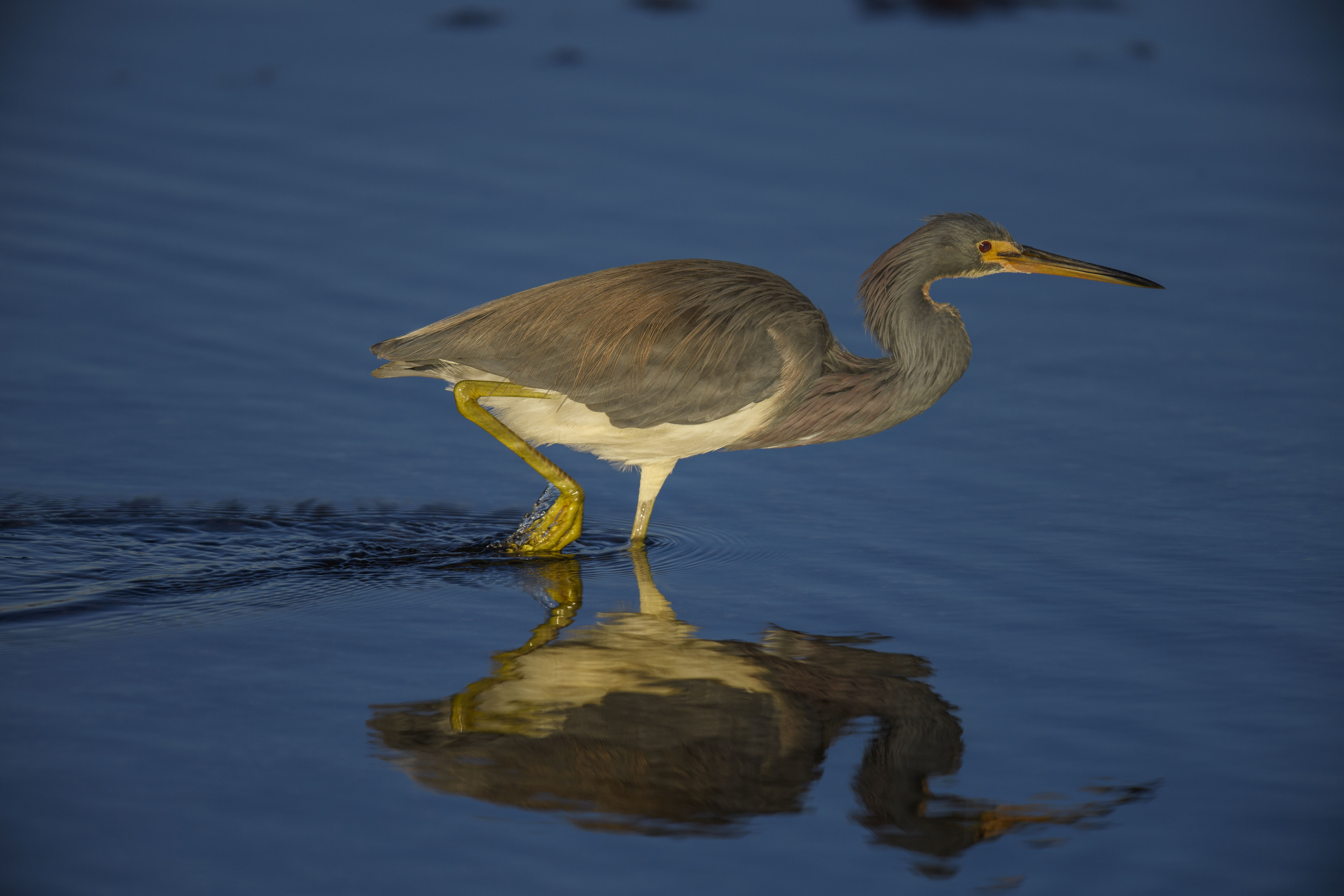 A couple of weeks ago, my friends Bob and Anne rescued a once scraggly pooch from an unfortunate beginning in a  Southern California puppy mill.  Renamed “Ernie” upon arrival at his new home in NorCal, this adorable Havapoo  (Havanese Poodle mix) is healthy, thriving, and adjusting to his new home.  Ernie joined the Eclipse Party at the gym on Monday and seemed to enjoy the festivities.  If you look closely, you can even see the eclipsing sun reflected in Ernie’s left eye.

Meeting Ernie brought back wonderful memories of Cinder, the beloved Poodle mix mutt that my brothers and I grew up with.  Cinder was a little bigger than Ernie.  Today, they’d call her a Labra-Doodle, a cross between a miniature poodle and a much larger Labrador Retriever, but she wasn’t a planned puppy from a puppy mill but one of several puppies from a neighborhood litter of mutts.  When people would see Cinder hanging out the car window they would shout, “Look, it’s the Shaggy Dog!” because she looked so much like the title character of the then popular Disney movie from 1959, The Shaggy Dog. 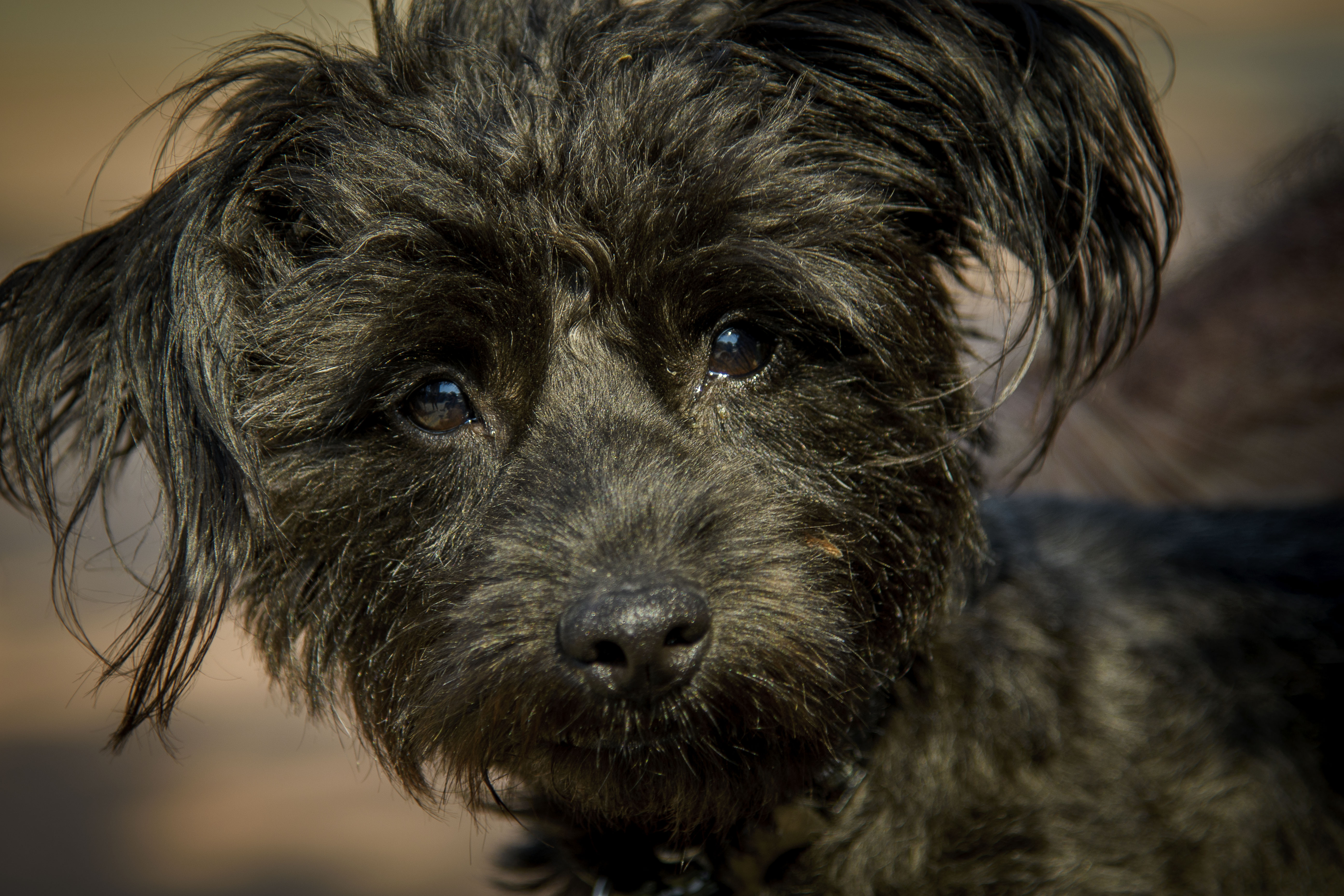 Unless you live under a rock, you know that yesterday was the first total eclipse to pass over the continental United States in 99 years.  Where I live, the eclipse was only 80% complete so there was not nearly the dramatic impact that was expected in areas of total eclipse.  The stars didn’t come out and we couldn’t view the sun’s corona but, that didn’t keep people here from gawking in fascination as the moon passed in front of the sun, dropped the temperature a noticeable few degrees, and created crescent shaped shadows of leaves on the pavement.   We had an Eclipse Party of sorts at my gym.  My friend Cindy passed out Moon Pies, Milky Way Bars, Sunny D, and Sun Chips.  We shared Eclipse-friendly viewing glasses with those who didn’t have them and crowds came and went as the moon invaded the sun’s silhouette at one point looking like the Cheshire Cat smiling down, then becoming the familiar crescent of the flag of Turkey, then moving away completely. 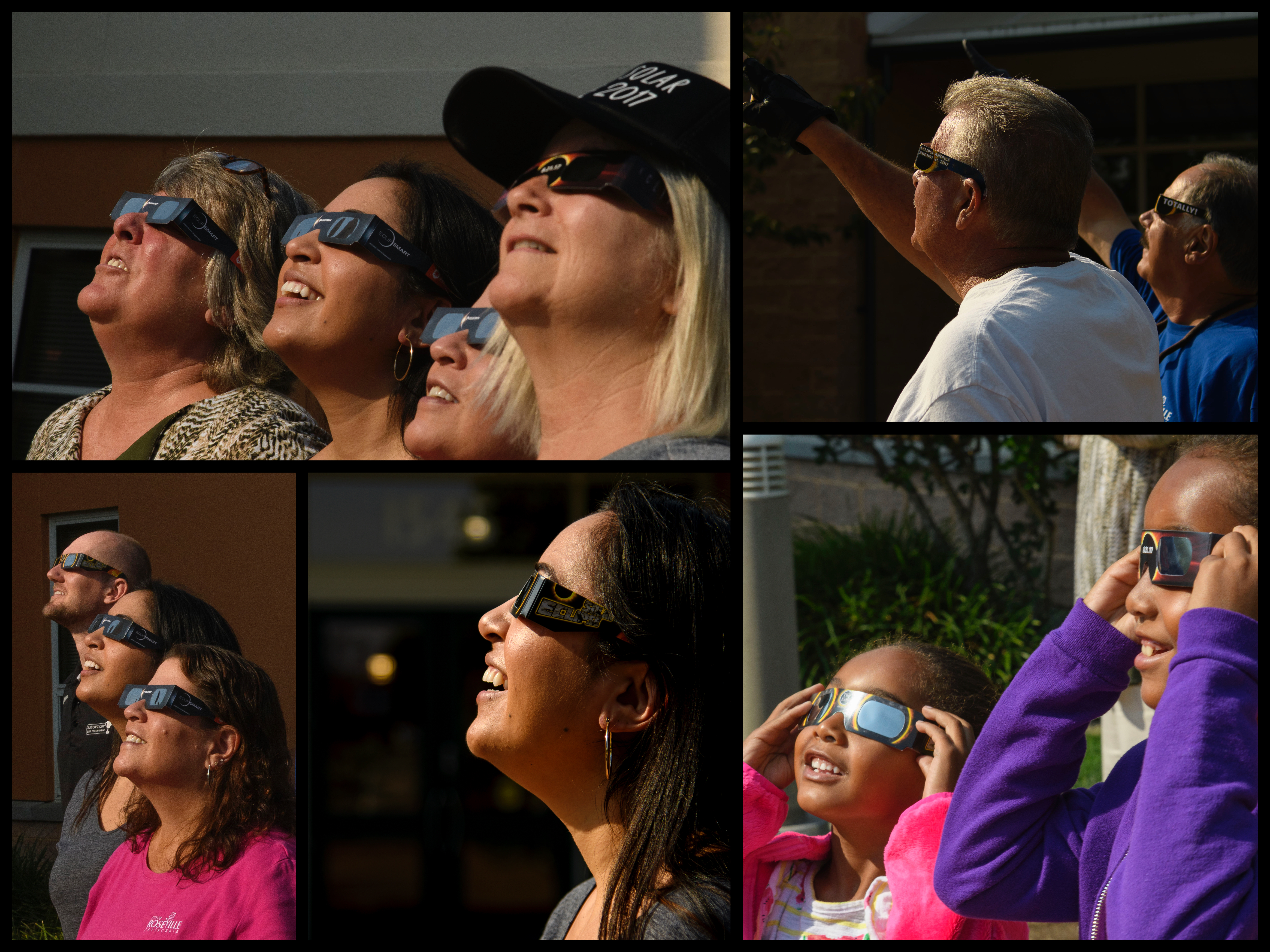