I’ve struggled a bit since I’ve been in Yellowstone with equipment issues, all caused by operator error.  None of the issues is major and they are easily correctable and were all preventable.

At the end of our first stop on our first morning in Yellowstone, I broke my new di-GPS attachment.  It is a simple gadget and I read the instructions carefully, including the one I neglected to follow: remove the di-GPS before replacing the camera in the camera bag as it is fragile and might break if it is forced for any reason.  As I was ignoring this important instruction, it caught on the edge of the camera bag and cracked a piece out of the plastic collar.  By 8:36AM of the first morning, I no longer had a functioning GPS tracker.  I thought it was broken but at the end of the day, Moose asked to take a look at it and discovered it still worked, even with the cracked collar.

Day 2 started with a drive into Yellowstone National Park on Highway 191 along the Madison River.  We pulled over to photograph the morning sunrise and walked through deep snow down to the river’s edge.  Once again I had attached the Di-GPS to the D5 and began to take photographs looking down the Madison River toward the colorful clouds and rising sun.  My photographs were alarmingly dark and I had to add +1.7 exposure compensation to get anything other than a silhouette.  I was standing next to Moose and he heard me grumbling and asked to see my camera.  Despite his efforts in the less than ideal conditions (-1° morning temperatures and heavily gloved hands although he did remove his for a few minutes to inspect my camera) he couldn’t find what was wrong and handed the camera back to me.  Eric was standing behind me and said, “Carol, did you drop something?”  I looked down and a small loop of black thread lay on top of the snow.  We were up to our knees in soft snow.  I reached down and pulled my di-GPS unit, slightly smaller than my Fitbit Zip, out of the snow.  Thank you, Eric.  If he hadn’t been standing there, I wouldn’t have noticed its absence until we’d returned to the vehicle.  So, by 7:55AM on the second day, the GPS was again out of commission.

When we returned to the vehicle to continue our meander through Yellowstone, Moose again looked at my camera in slightly more ideal conditions.  He discovered that I had somehow changed the white balance settings within the Cloudy preset so that there was a pronounced dark blue cast to it.  And, I had managed to make those changes the day before when on the first morning, fingers heavily gloved and awkwardly groping at buttons and dials, I hadn’t realized that I was changing settings with adverse exposure consequences as a result.  So, I’m not sure what I’ll do about the GPS unit.  Buy a new one and be more careful with it, I suspect. As for the problem with inadvertent changes to settings, I need to be more careful with my bulky gloves when I’m making changes to settings.

Each day when we return to our rooms we lay out our gear under towels to acclimate to warmer temperatures in the rooms and to avoid moisture condensation onto the gear.  When we return from dinner, we clean all our gear and return it to our camera bags.  We do this because of the harsh conditions that our equipment is exposed to as we walk near the geysers as they are spewing steam that is highly alkaline and acidic and very toxic to camera gear.  In addition, after the settings fiasco of the early part of the day, I have added something to my nightly routine.  I will make sure I return all the settings to my personal default settings.

After the morning I had, I guess I shouldn’t have been surprised that Eric photobombed my sunrise photograph. 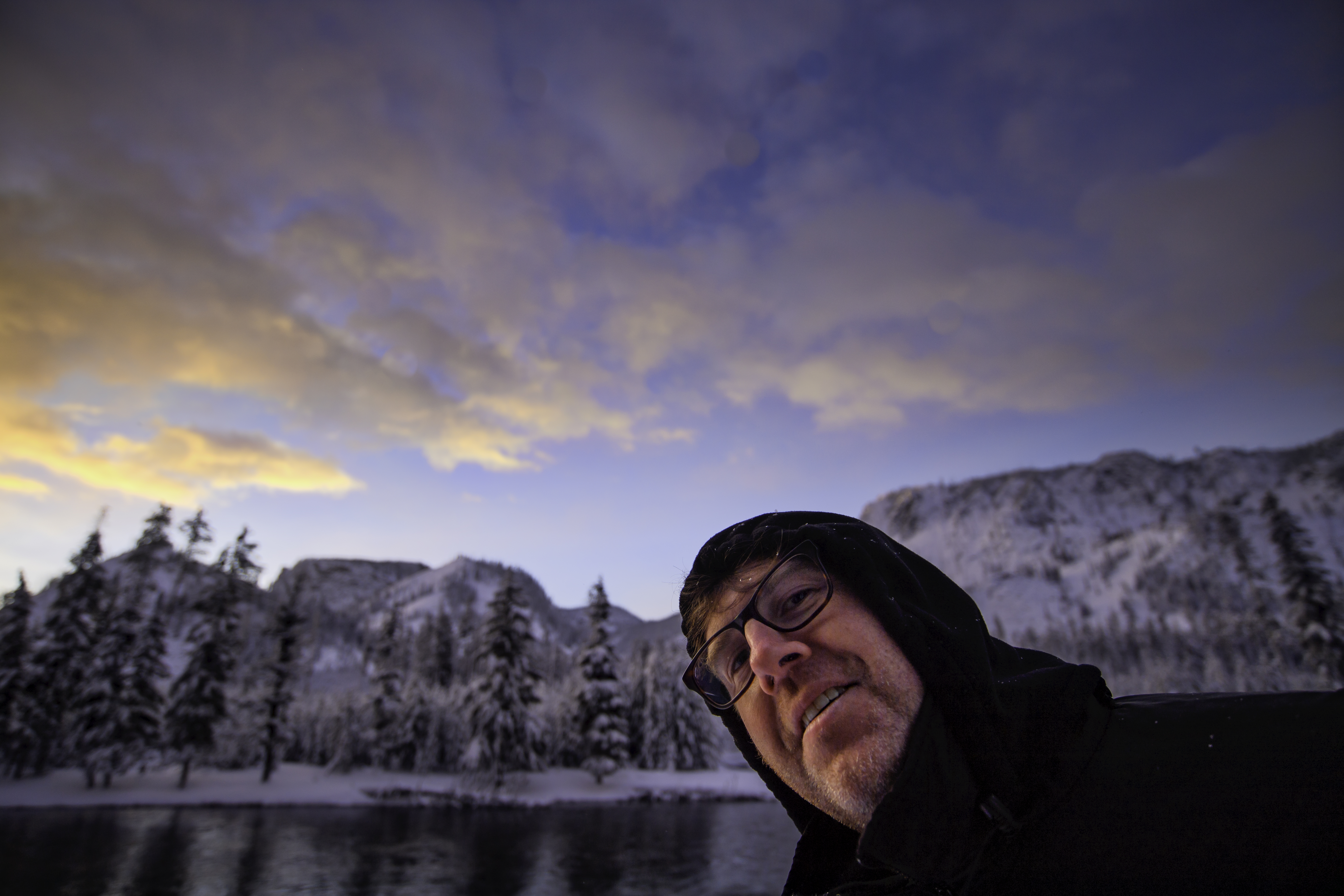