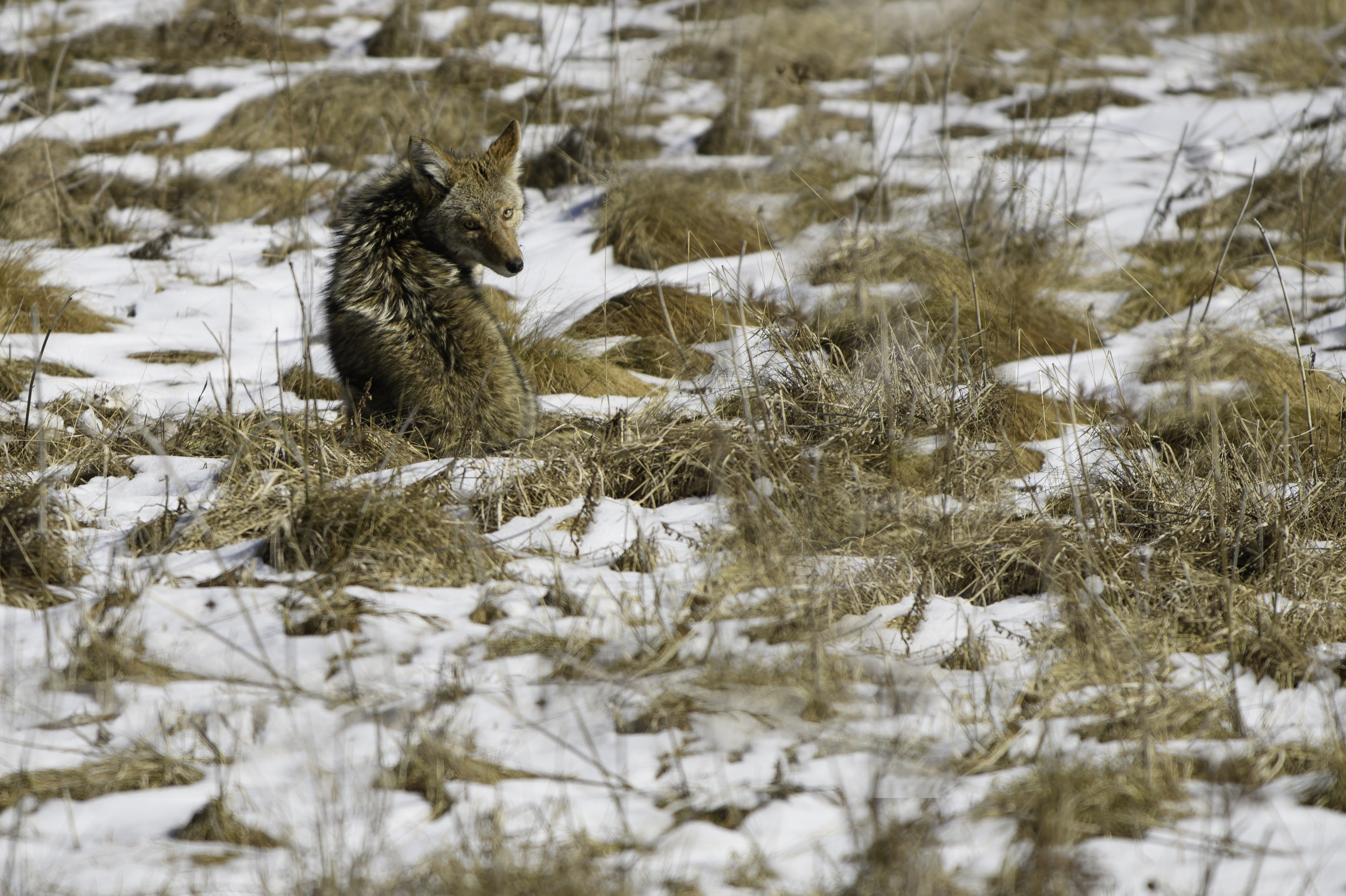 Bridalveil Fall is so-named because when the fall is at its peak in spring and early summer, the winds push the spray out in such a way as to mimic a bride’s veil.  Although precipitation in the valley has been slight this year, the winds whipping the spray from the falls still created frozen patches of ice and snow that are reminiscent of a white veil.  We hiked up the steep icy path to the base of the falls and were treated to another spectacular and iconic view in Yosemite Valley. 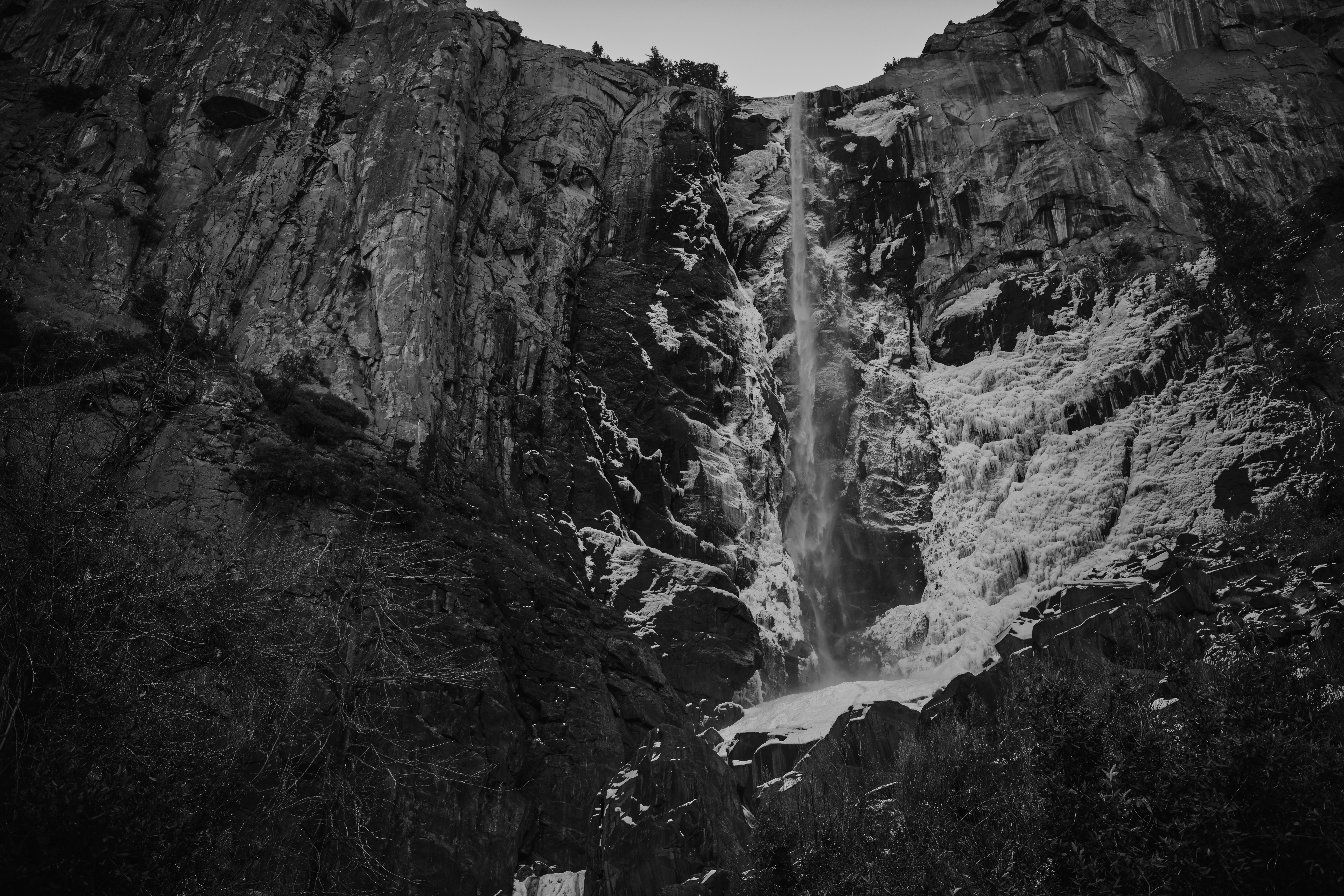 We stayed in the Yosemite Valley Lodge which is steps away from Yosemite Falls.  I used a 6 stop neutral density filter to slow the shutter speed to blur the water on both upper and lower Yosemite Falls in this photograph.  Because of the harsh sunlight, I rendered the final image in black and white.  The wind blows the water and the water vapor freezes to the granite walls overnight, making a unique pattern on either side of the falls the changes daily.  As the sun warms the rock, huge chunks break off with a resounding boom. 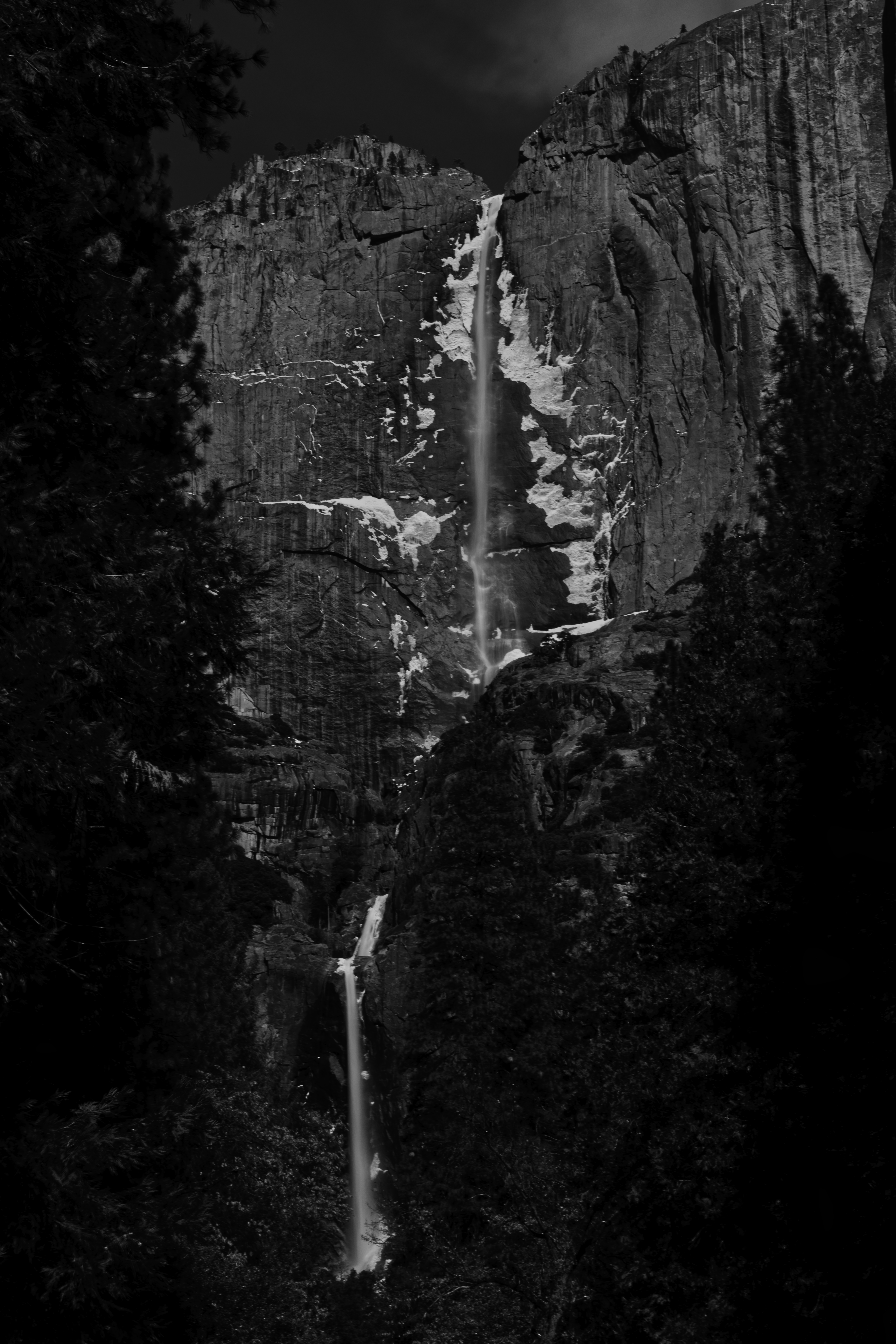 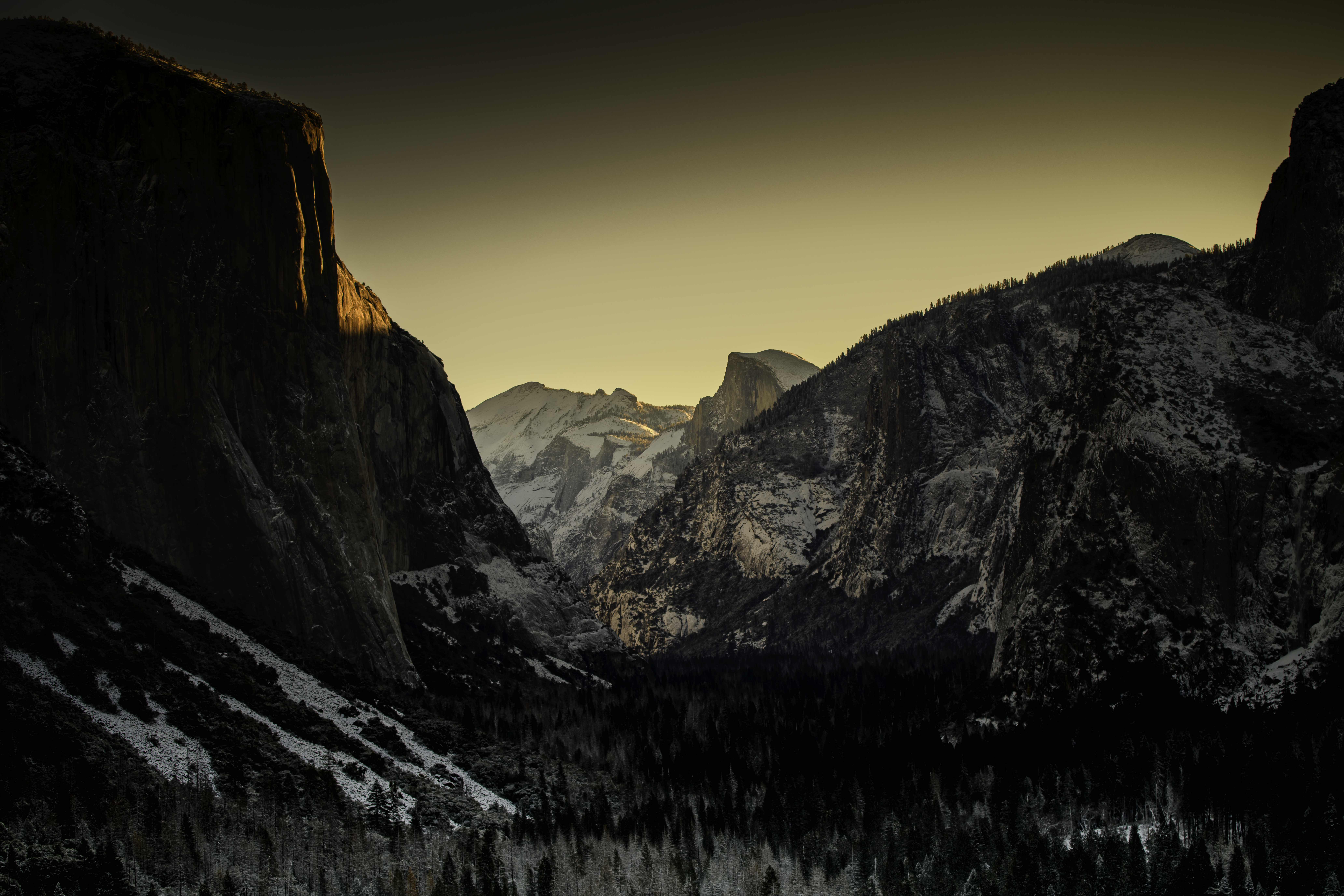 One of Montana’s nicknames is “Big Sky Country.”  And, while Yellowstone is partly in Montana, most of Yellowstone is in Wyoming where I took this photograph.  I think those “Big Skies” claimed by Montana extend well into Wyoming.  After I converted this photograph to black and white using a Luminar 2018 preset, I thought the clouds became much more dramatic and so the “big sky” analogy seemed to fit perfectly. 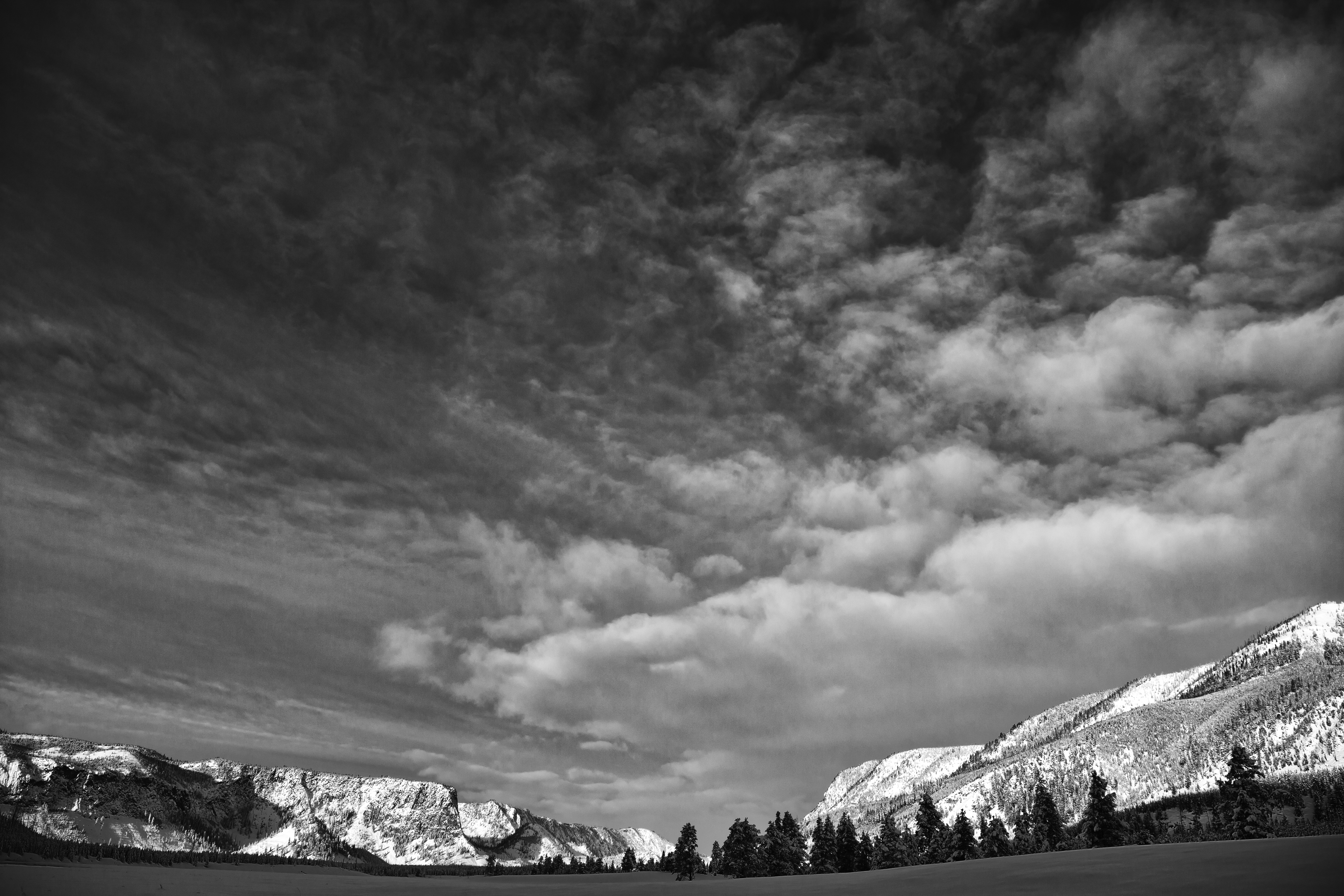 Most of our days in Yellowstone last month were gray, snowy, and colorless—great for black and white photography but there were not many opportunities for colorful landscapes when we weren’t at one of the geyser basins with their colorful mineral and algae displays.  The one exception was on our second day.  Shortly after we entered the park, we pulled over and slogged through knee deep snow to the edge of the Madison River and were treated to a glorious sunrise complete with god beams.  Or, maybe I should say, complete with god beam.  There was a single beam that shined straight up from the rising sun.  The god beams in this photograph had a little help from Luminar 2018. 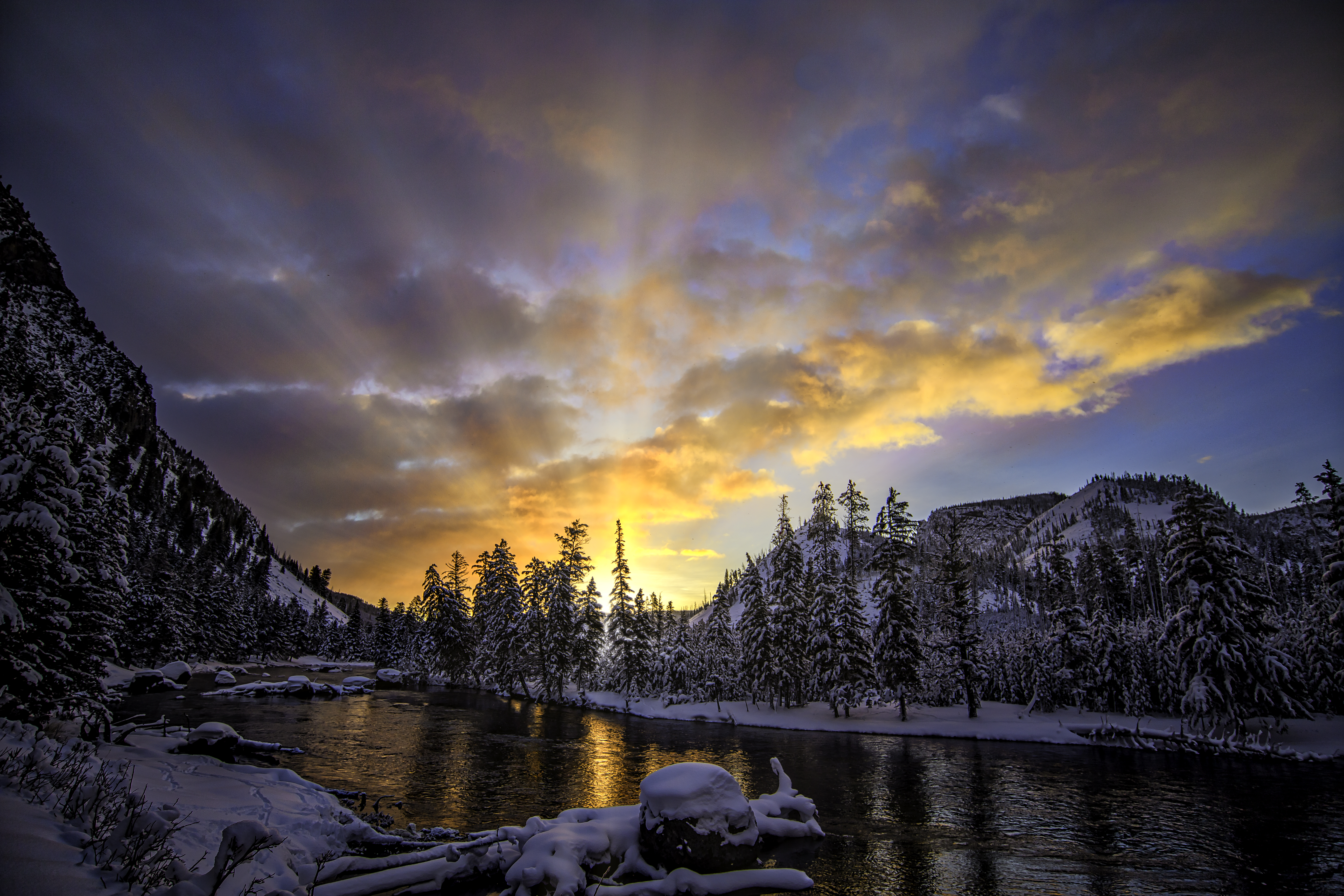 After they had rested and their stomachs had begun to digest their earlier feast , the Yellowstone wolf pack returned to the bison kill and gnawed on the remains. 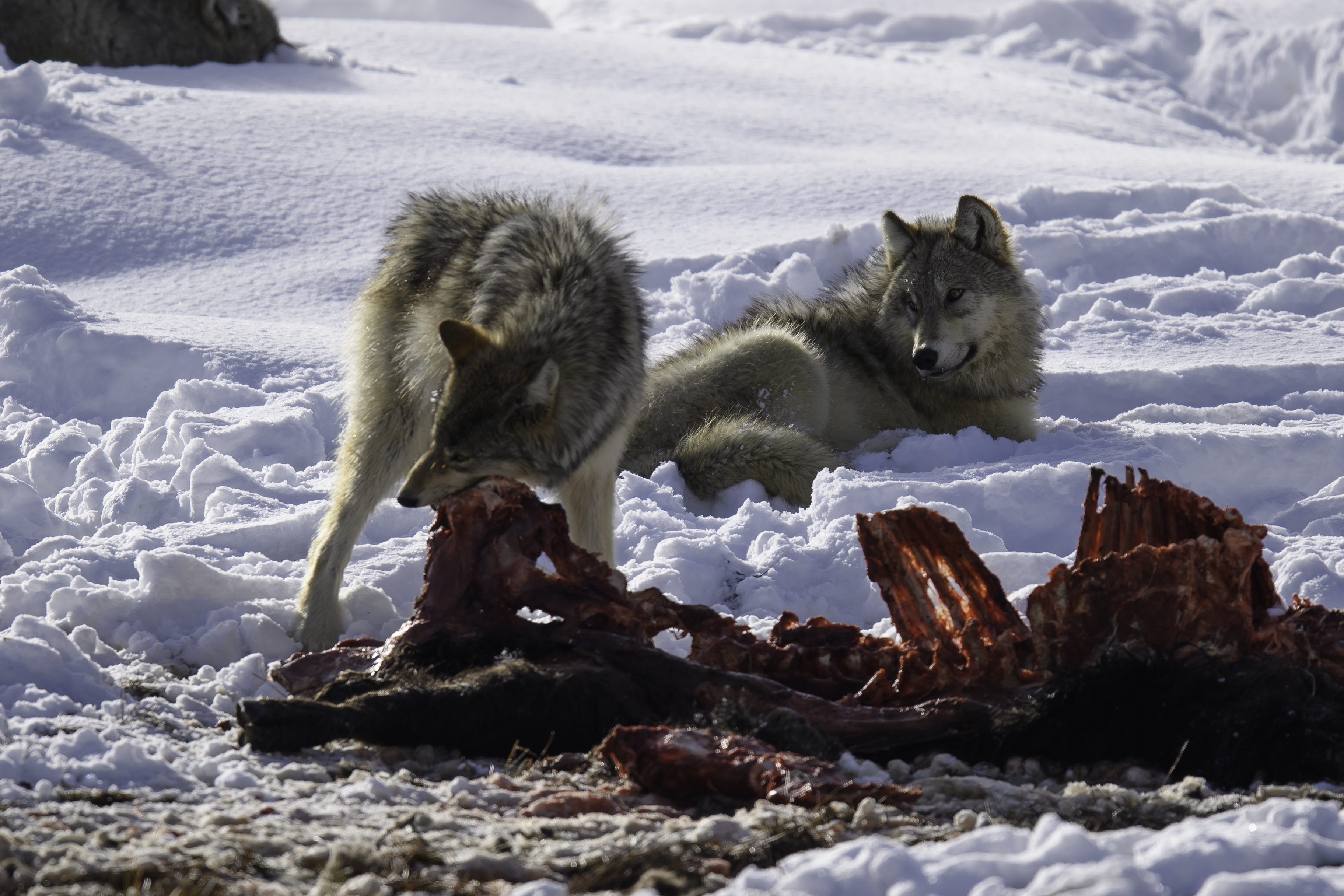 I love watching the Winter Olympics.  The sports are so different from the mundane football, basketball, and baseball with which we are inundated on a daily basis and, so much more elegant.  I marvel at the dazzle of the skaters, the grit of the boarders, the grace of the skiers, and the courage of the sledders.  The sports of the Winter Olympics are so unique and so difficult and I am captivated by them all.

In the midst of the cold, snow-banked Madison River in Yellowstone last month, this pair of Tundra Swans paddled by ever so elegantly.  While their leisurely swim by was not comparable to a Winter Olympic sport, their simple movements were effortless and I was captivated by them, too. 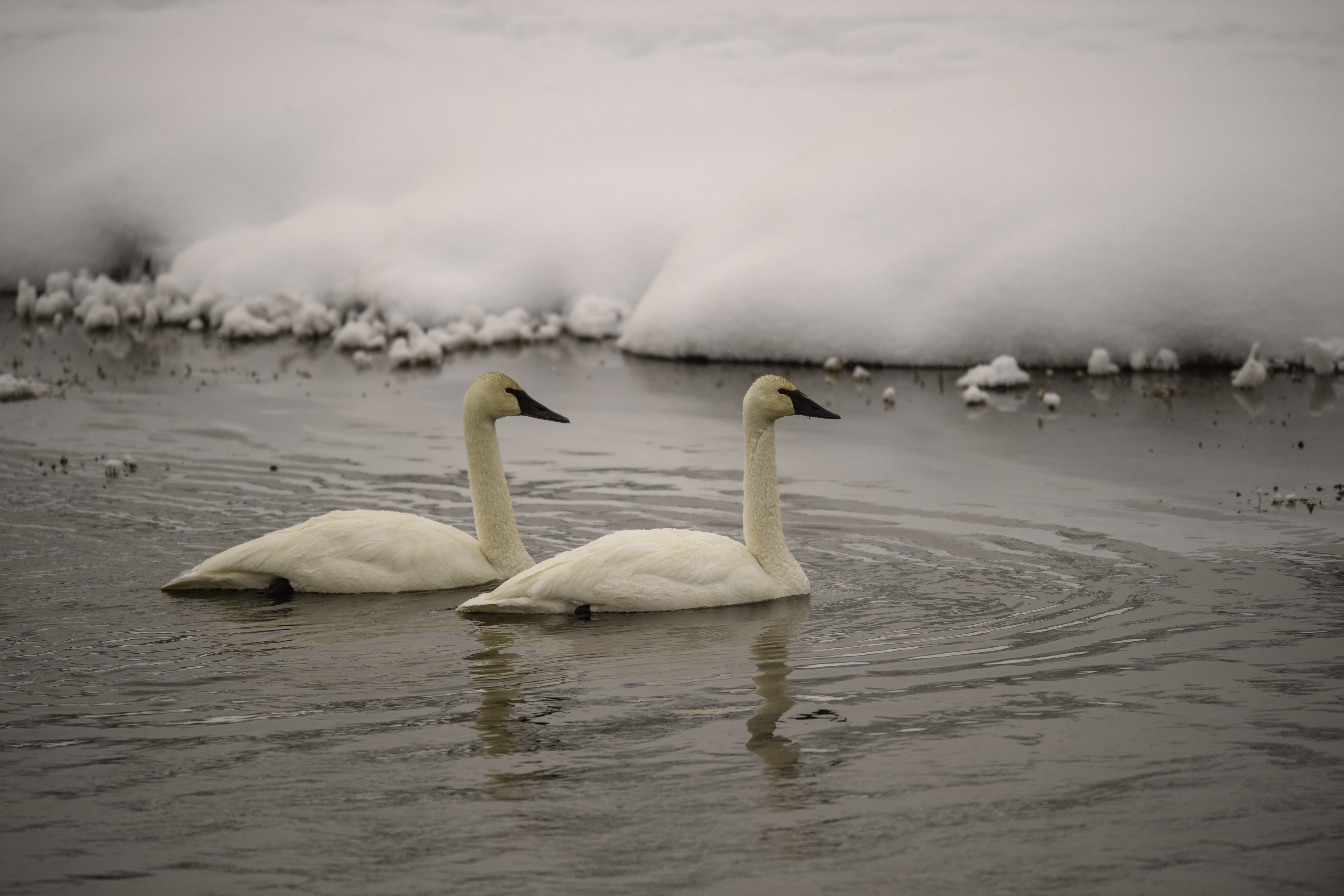 I just can’t get enough of the wolves that I photographed in Yellowstone.   As I continue to review my images (I took almost 4000) I keep finding gems that I didn’t notice the first (or second or third) time through.  The young wolves playing together were the most captivating to watch.  Of course I took lots of them gnawing on the bison carcass but those aren’t nearly as appealing as those of the wolves just being, well, the big dogs that they are (gray wolves are Canis Lupus and domestic dogs are Canis Lupus Familiaris. 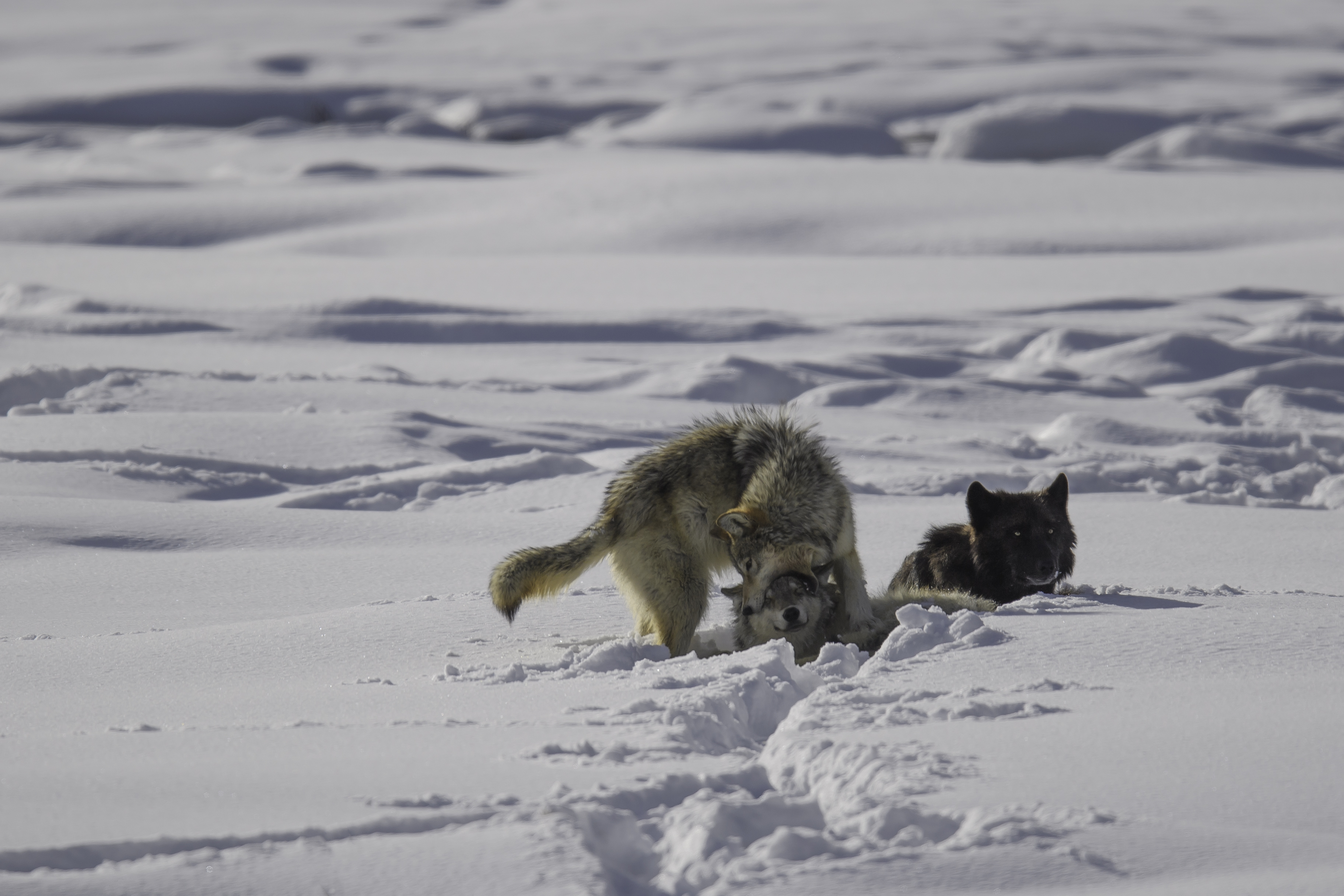 In the first hour of the first morning on my recent visit to Yellowstone National Park,  we stopped to photograph this lone tree just off Highway 191 which is the  main road that parallels the Madison River into the park.  It was barely light with heavy overcast when we stopped about 8AM.  There was banter about this being a potential Christmas card photograph.  Since I haven’t sent any Christmas cards in more than 20 years, it is doubtful that this would ever become a Christmas card.  Consider this a (very) early Christmas greeting.