I just spent three days in St. Augustine, Florida at the St. Augustine Alligator Farm photographing the natural rookery that has evolved over  decades since the “Farm” was established in the late 1800’s.  The alligator swamp under the oak trees has proven to be a safe haven for native herons, egrets, spoonbills, ibis, and wood storks because the presence of the alligators prevents climbing predators from attacking the nests.  I was there on a three day workshop with Moose Peterson and three other photographers.  It was still quite early in the season but there were scores of birds, especially great egrets and roseate spoonbills, and they were developing their breeding plumage and starting their mating rituals.  We had a fabulous opportunity with the birds on their roosts and nests just a few feet away from the walkway.

The great egrets in particular dominated the scene.  Their rituals are elegant and  predictable.  When the male returns to the nest and presents his mate with a stick to add to the nest, both birds  arch and stretch their necks and click their beaks.  At the apex of the performance,  their heads, necks, and beaks form a heart shape, with each bird comprising half of the heart.  I made it my mission to capture that behavior.  Predictable as it was, I still missed it every time.  Moose tried to get me ready for it by saying, “bird flying to nest” but as I turned, the charming ritual display took place and I was still adjusting focus or I was not looking in the right place, or I was  momentarily distracted.  On the last afternoon, Moose pointed to a pair that gave me a perfect view, the light was great, and he suggested I try for my heart.  After an hour of only partial success, Moose suggested I move to another location where the birds were more active.  We had only a precious few minutes left at the Alligator Farm and he wanted me to take advantage of this opportunity to get some other photographs.  Then finally, with only a few minutes before we had to pack up our equipment, I managed to capture the ritual, but not without flaws.  I was too close to capture the entire bodies of both birds in the frame.  The irony of being too close after lusting after, and actually purchasing, a 600mm lens is not lost on me.   But, I got my heart after a fashion.  I cropped out the extraneous parts of the birds for a more pleasing composition.  The shortcomings of this shot give me a goal for my upcoming return visit to my friend Connie and the High Island Rookery near Galveston, TX in April.

Here then, is the first chapter in my quest for an egret heart. 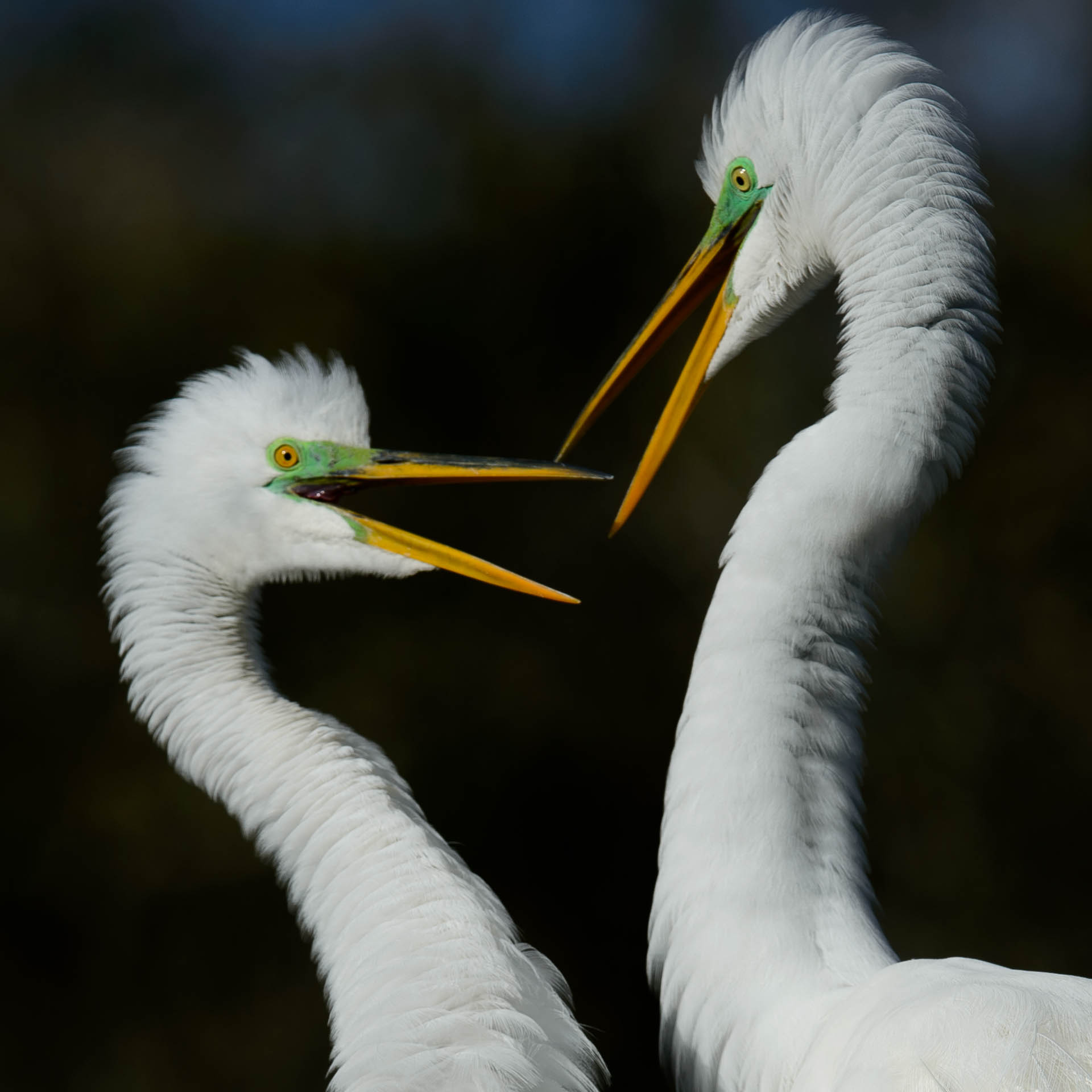