Yesterday, I posted some photos of a butterfly. Today’s photos are also of a “mariposa” (Spanish for butterfly) but this Mariposa has talons. Sunday was the annual open house at the California Foundation for Birds of Prey. One of the features of the open house is a free flight demonstration put on by Kate Marden of West Coast Falconry. Kate usually flies a hybrid falcon called Webster but concerns about “Omar,” the resident (wild) red tailed hawk who has claimed the trees and skies around CFBP headquarters as his territory, might attack Webster so that kept Webster from making an appearance. In his stead, Mariposa, a Harris’s hawk, native to the American Southwest, provided the in-flight demonstrations. Her low flights through the delighted crowd of onlookers made this demonstration a huge hit.

After several passes through the crowd, Kate thought Mariposa was showing signs of boredom so she changed the demonstration. She and her assistant, Marya, took turns as one tossed a small chunk of jack rabbit (caught by Mariposa on a hunting expedition a few days ago) into the air and the other simultaneously released Mariposa to catch the reward in midair.

These five shots are from two separate sequences. I took the first two shots at 110mm and cropped them to a 16 X 9 aspect ratio. In the first shot, Mariposa catches the meat in her talons, then flips over and heads back down to eat her reward. I took the next three shots at 200mm and cropped them to 8 x 10. In the first of these shots, Mariposa misses the meat. It can be seen to the right of her head, just over her left wing. I cut off tip of the left wing but I thought the shot was incredible so I’m posting it despite the missing wingtip. In the next two shots, Mariposa turns and flies back down to the ground to find what she missed. The last one barely made it in the frame. I think these shots all qualify as having “gesture.” 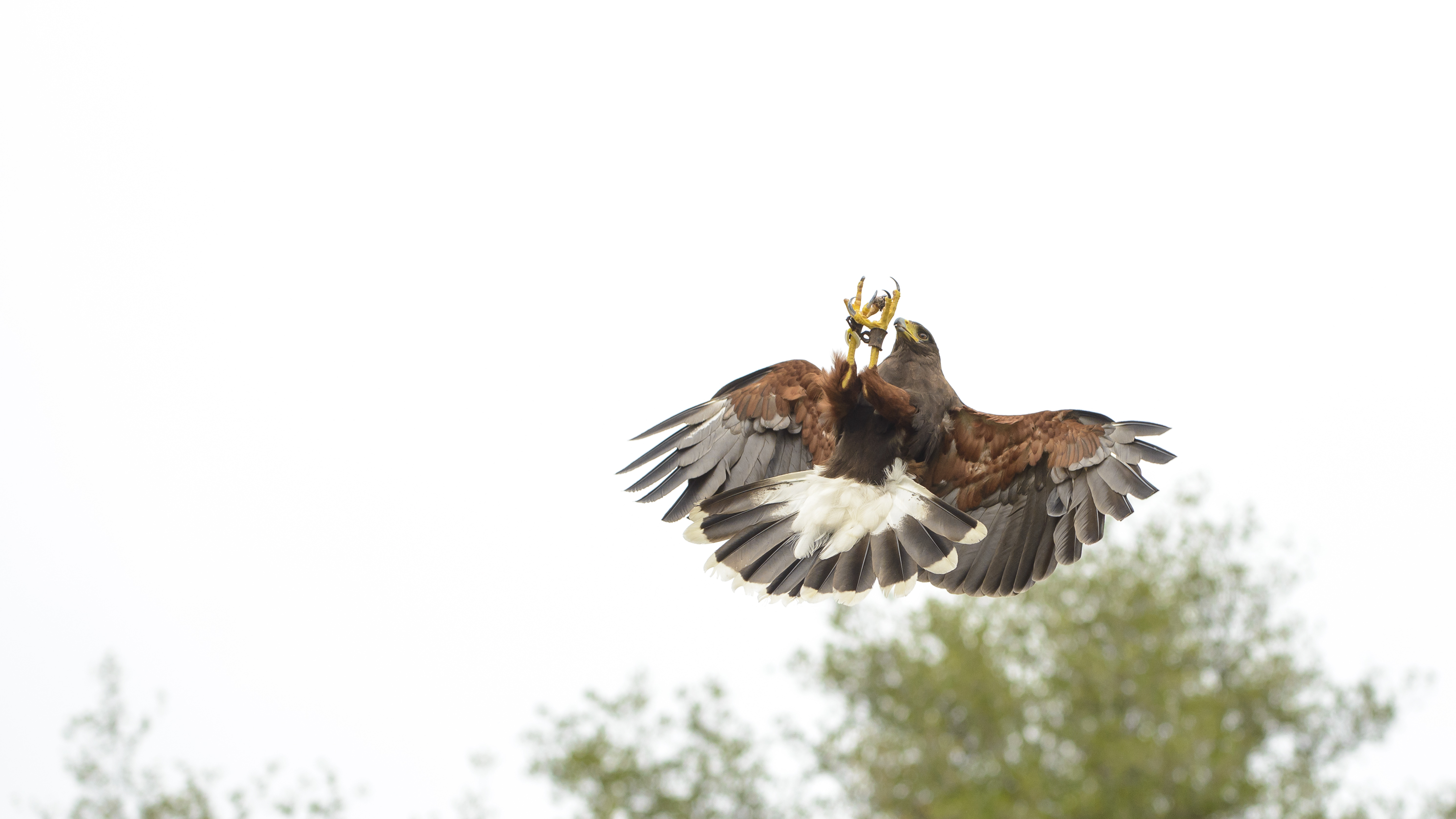 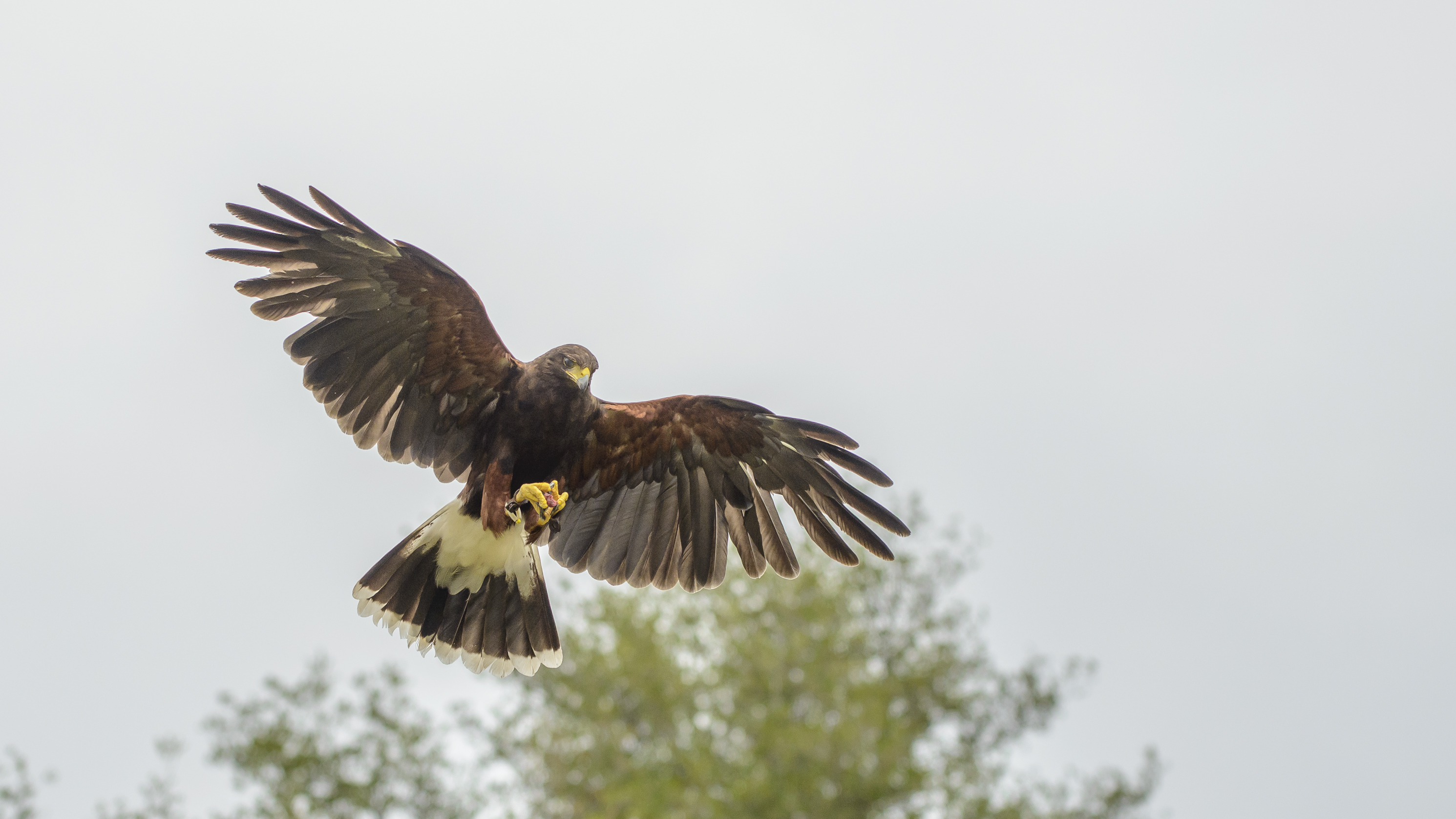 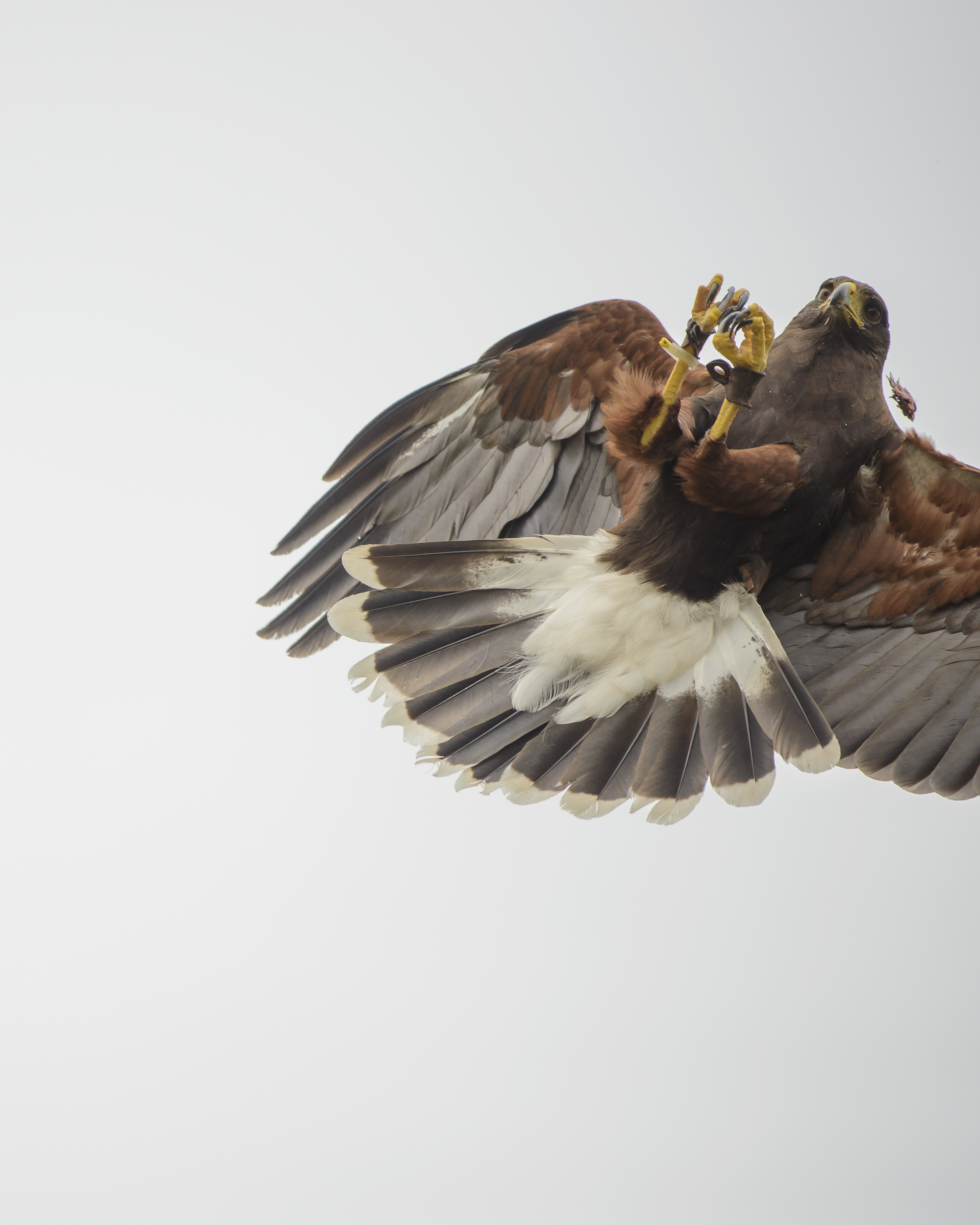 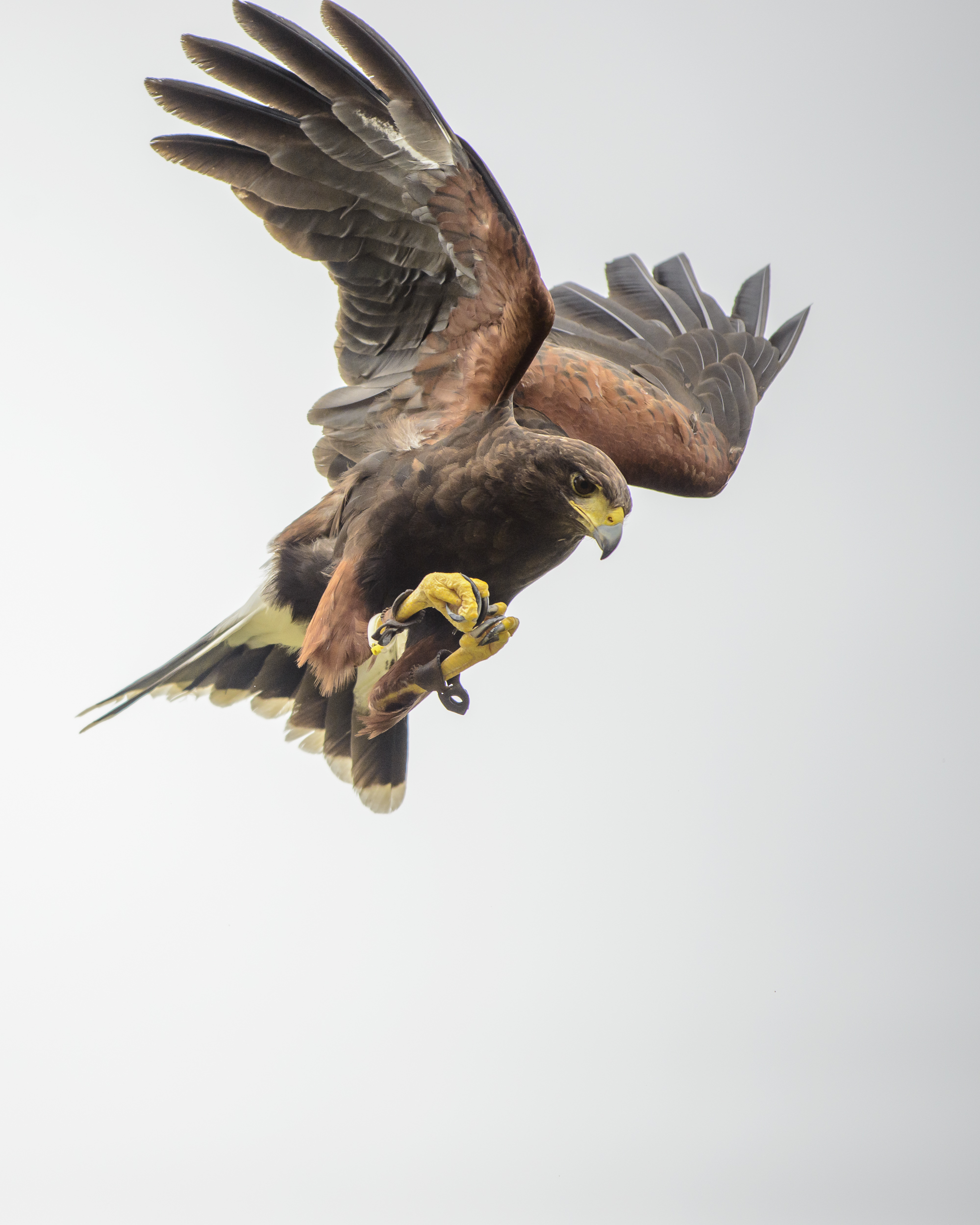 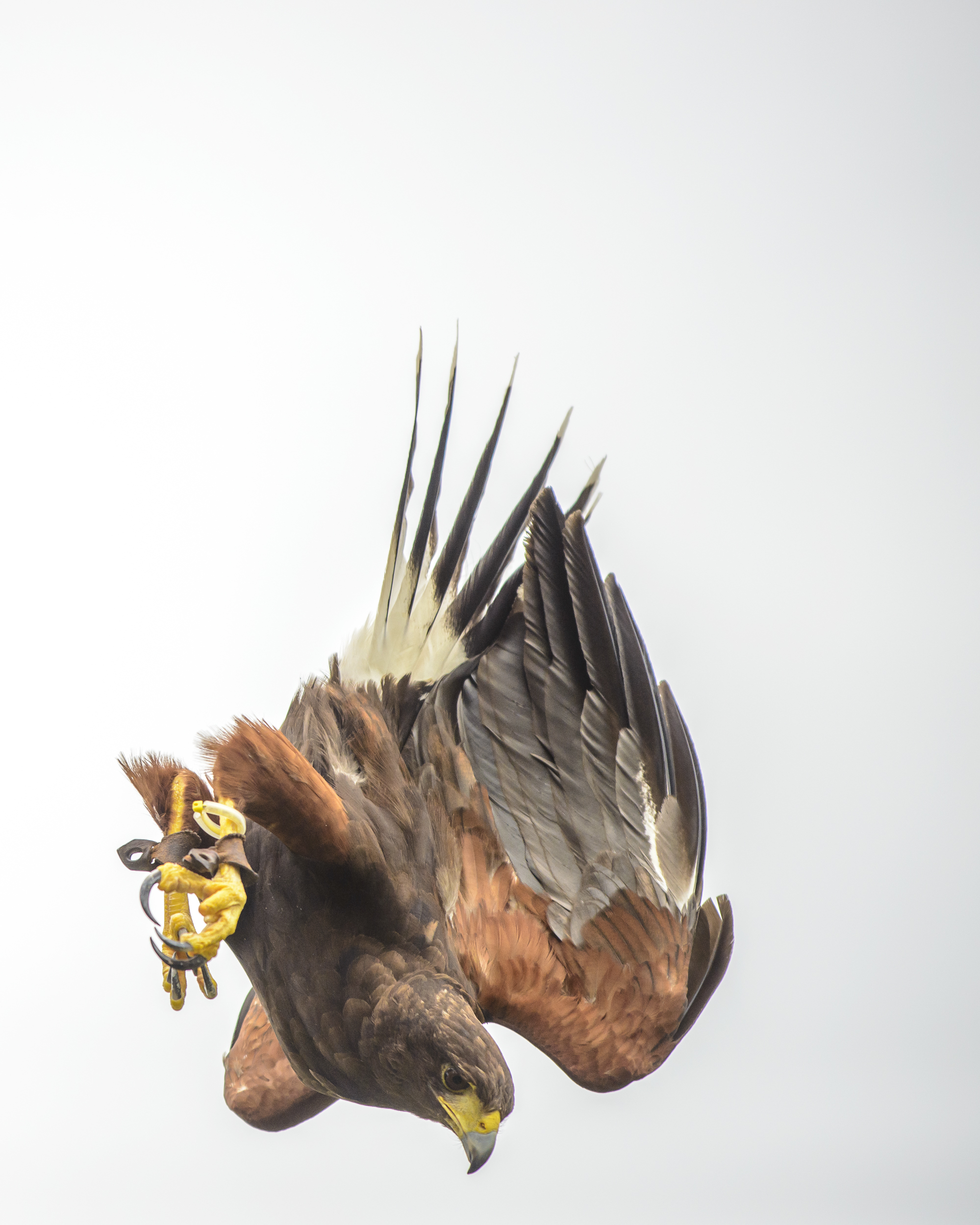