We were patting each other on the back for the great job we’d done finally getting everything packed and either out of the house of ready to be moved out when somebody mentioned that the Pest Inspector had noticed a box of old magazines in one of the attic spaces. I ran upstairs to look and could see stuff there but could not bring myself to crawl inside because of the creepy crawlies that might be lurking. One of the benefits of being the little sister is that your big brother might just protect you from those creepy crawlies and my big brother did. Arthur crawled inside and discovered a box of old newspapers and magazines featuring the 1969 moon landing. Sunset Line and Twine, Co., my family’s company, made all the parachute cord for the Mercury and Apollo flights so that event has a special meaning for my family. Further investigation revealed all of the colonial style braided wool rugs that had once adorned the living room and bed rooms in the house but that were now riddled with moth holes and we made the decision to leave them there. When Arthur dragged out a few more boxes containing the tracks from his HO Gauge train set, aging Christmas decorations, pine cones, and plastic bags of stuff, we thought it all to be junk until I peeked inside one of the bags and there were THE PENNANTS! I had wondered what happened to those baseball team pennants that had once been tacked to my brothers’ bedroom walls before Mom repapered it with National Geographic maps and turned the space into a pool room. They are now moth-eaten, badly faded, and the tips of a few are missing due to moths and thumbtack holes, but they are a fascinating glimpse at 1950’s teams. We have 1950’s pennants from the Kansas City Athletics, the Milwaukee Braves, the Stanford Indians, the Chicago Cubs and White Sox, and lots of others. Dad collected them for my brothers when he attended games around the country during his business travels.

I singled out these two pennants to feature because in 1958 the Brooklyn Dodgers became the Los Angeles Dodgers. Dad took my brothers and me out of school on April 15, 1958, and we sat behind home plate at Seal Stadium in San Francisco and watched the opening day game between the now San Francisco Giants and the Los Angeles Dodgers. I have vivid memories of watching my baseball hero, Willy Mays, kneeling in the on deck circle waiting to bat. The Giants won, by the way. I didn’t remember that they defeated the Dodgers 8-0. Thanks, Google.

When we looked at these pennants yesterday, we commented that “da bum” on the LA Dodgers pennant looked suspiciously like the famous clown of that era, Emmet Kelly, and indeed, it was. Apparently, Emmet Kelly’s likeness was used by the Dodgers in the last year or so of their time in Brooklyn and for a time in Los Angeles. 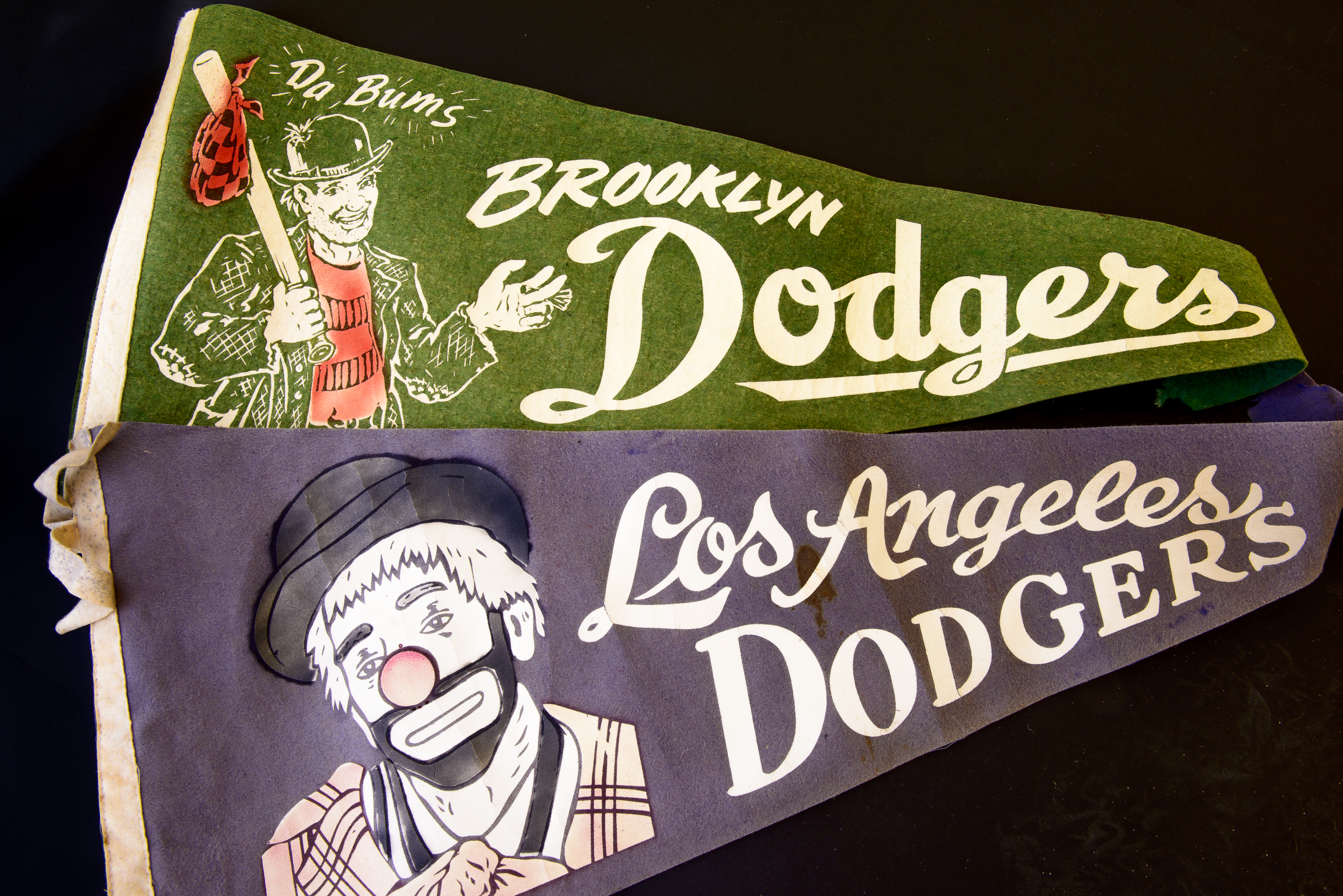