Anyone who knows me, even slightly, knows that I am extremely skittish around spiders, bugs, lizards, snakes, and any other creature that one might consider creepy crawly. What I learned in Costa Rica, however, is that it is impossible to steer clear of creepy crawlies and that one must gird one’s loins and get over any trepidations about them. My bungalow, which was open to the outdoors, was populated with a few geckos, moths or various dimensions, cicadas, ants, and many unseen creatures as well. I may have even had a bat or two, that while unseen, I could hear the sounds of frenzied wing flapping in my room at night. I thought it was probably the giant sphinx type moth that was with me all week, but after I learned that Richard had bats in his bungalow, I realized that’s probably what I was hearing. I slept comfortably under mosquito netting, however. And, after the first evening when I forced myself to step into the dimly lit shower stall, completely open to the outdoors, I accepted being up close and personal with them all.

One evening, Moose asked Gary our guide to put up a white sheet and a bright light at the highest point on the lodge grounds, the yoga platform. The light attracted so many species of moths and bugs that it was impossible to see and photograph them all. I had my fisheye with me that evening. For me, the most fascinating creature was also the biggest and, under normal circumstances I would have kept my distance. But I couldn’t resist kneeling down, inches away from a Rhinocerous Beetle that flew in, attracted by the light, and photographing it. This monster was about 5 inches long. This is one big bug! The bugs were everywhere and we had to tiptoe carefully to avoid smashing them. Here are a few of my favorite shots from that evening. That’s our guide Gary contemplating the white sheet and talking about the bugs. Ian, Kevin, and Eric are in the background. 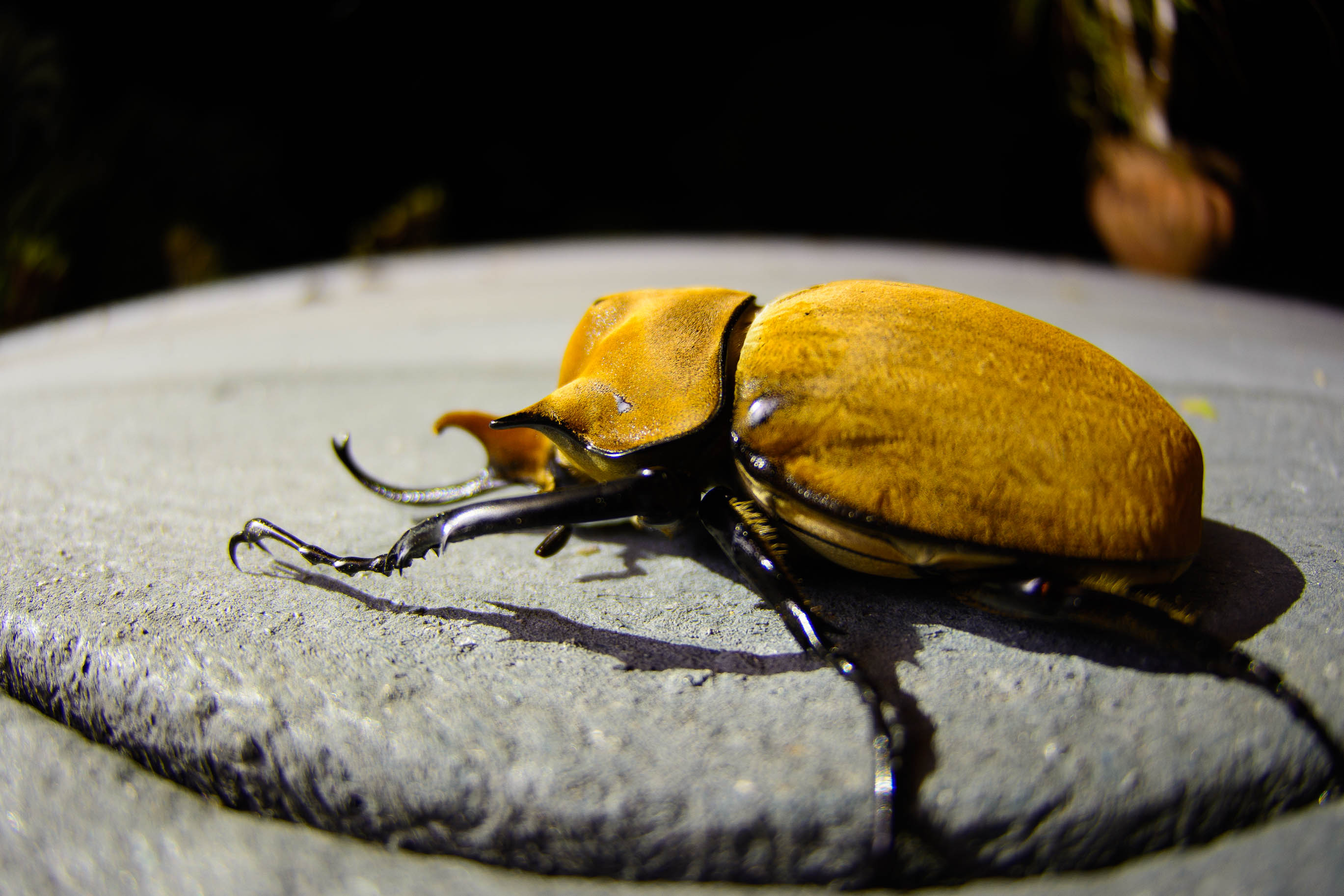 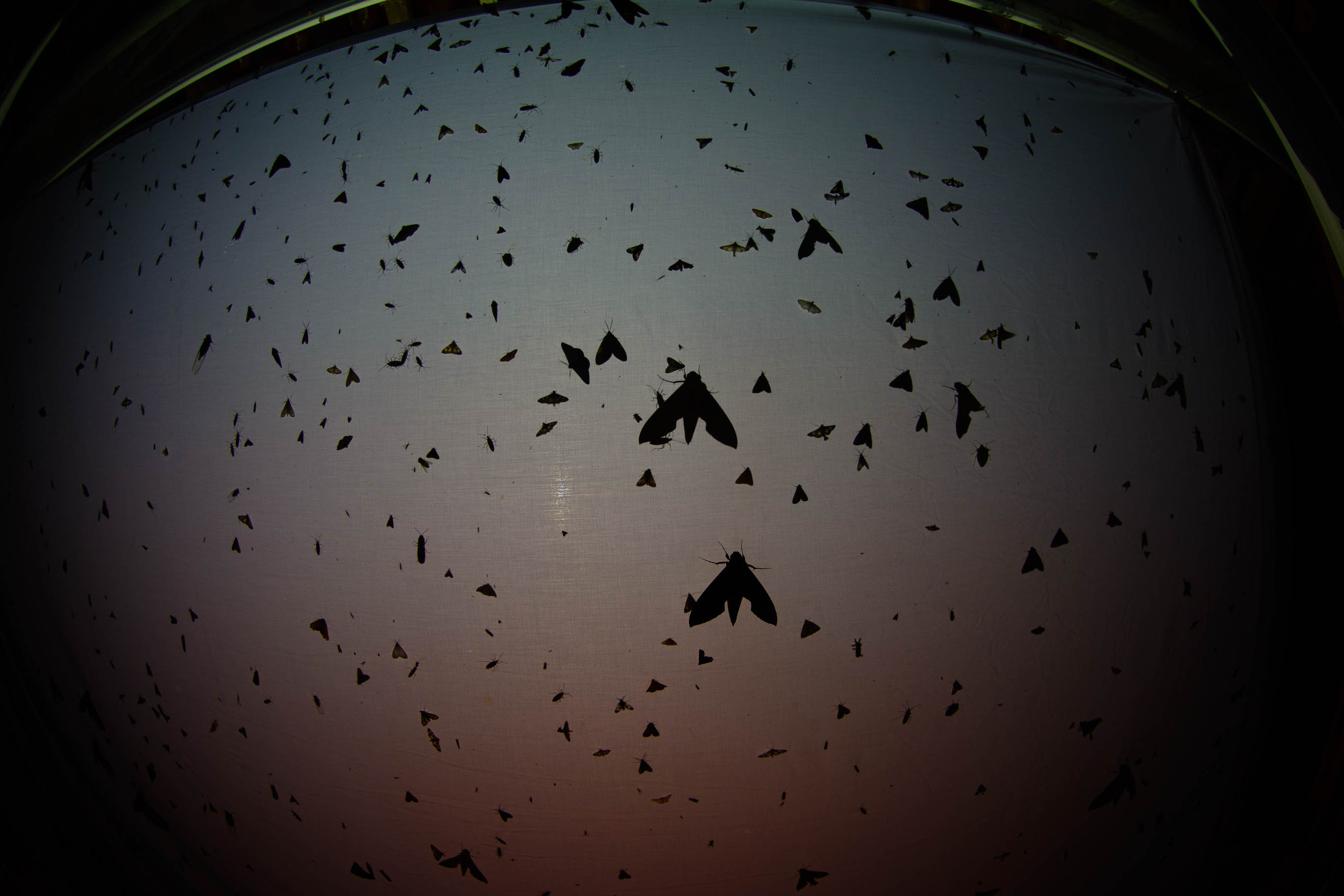 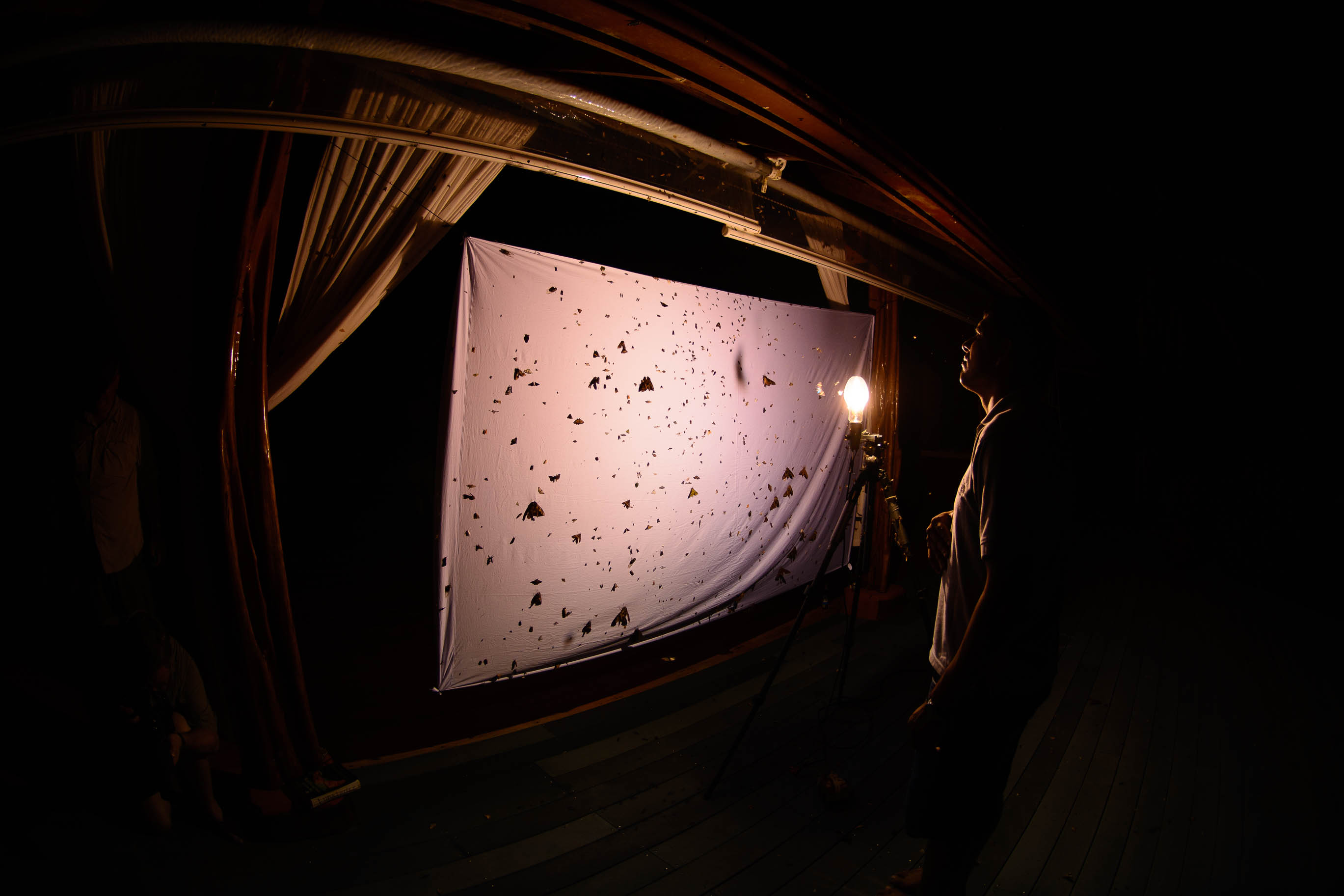 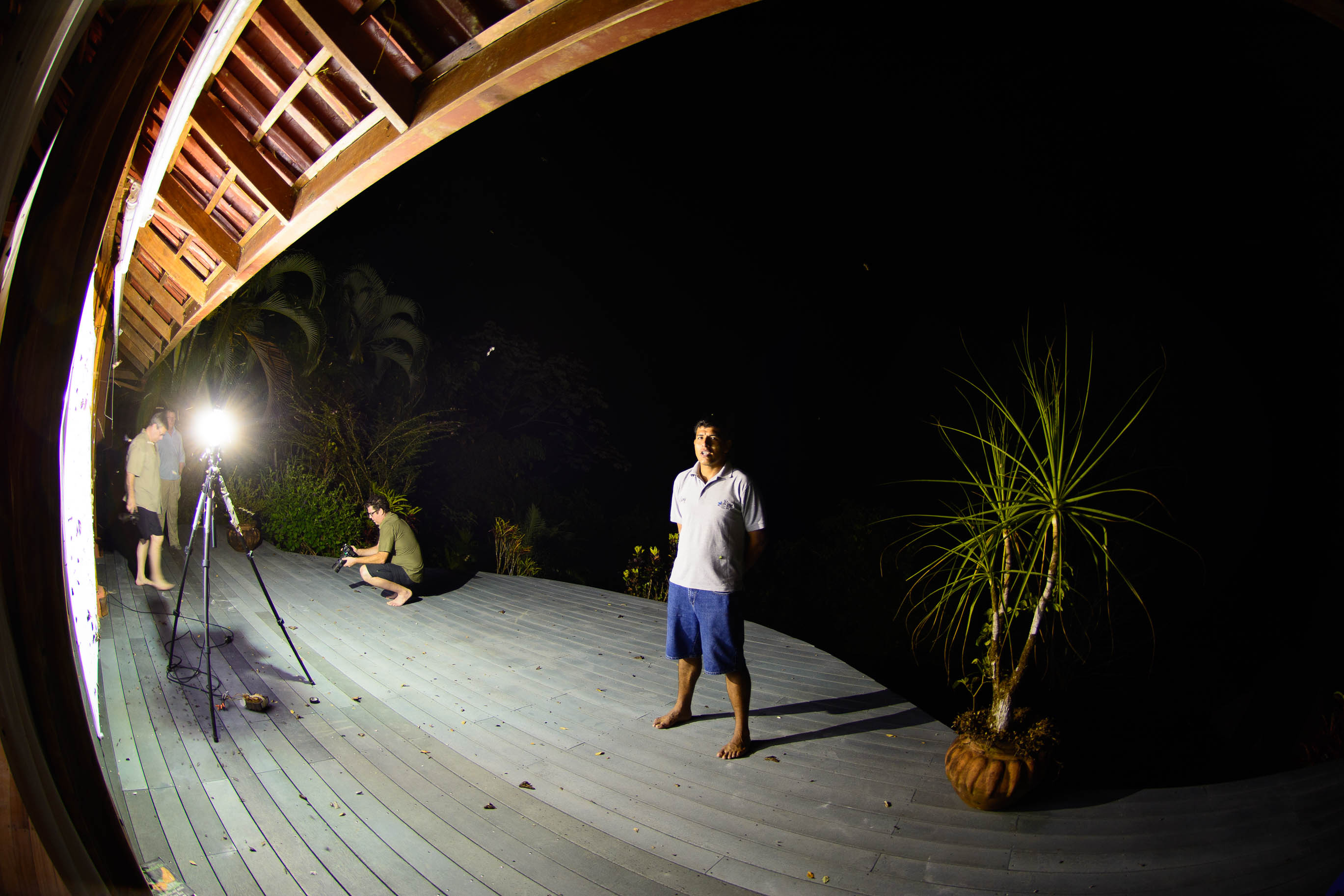 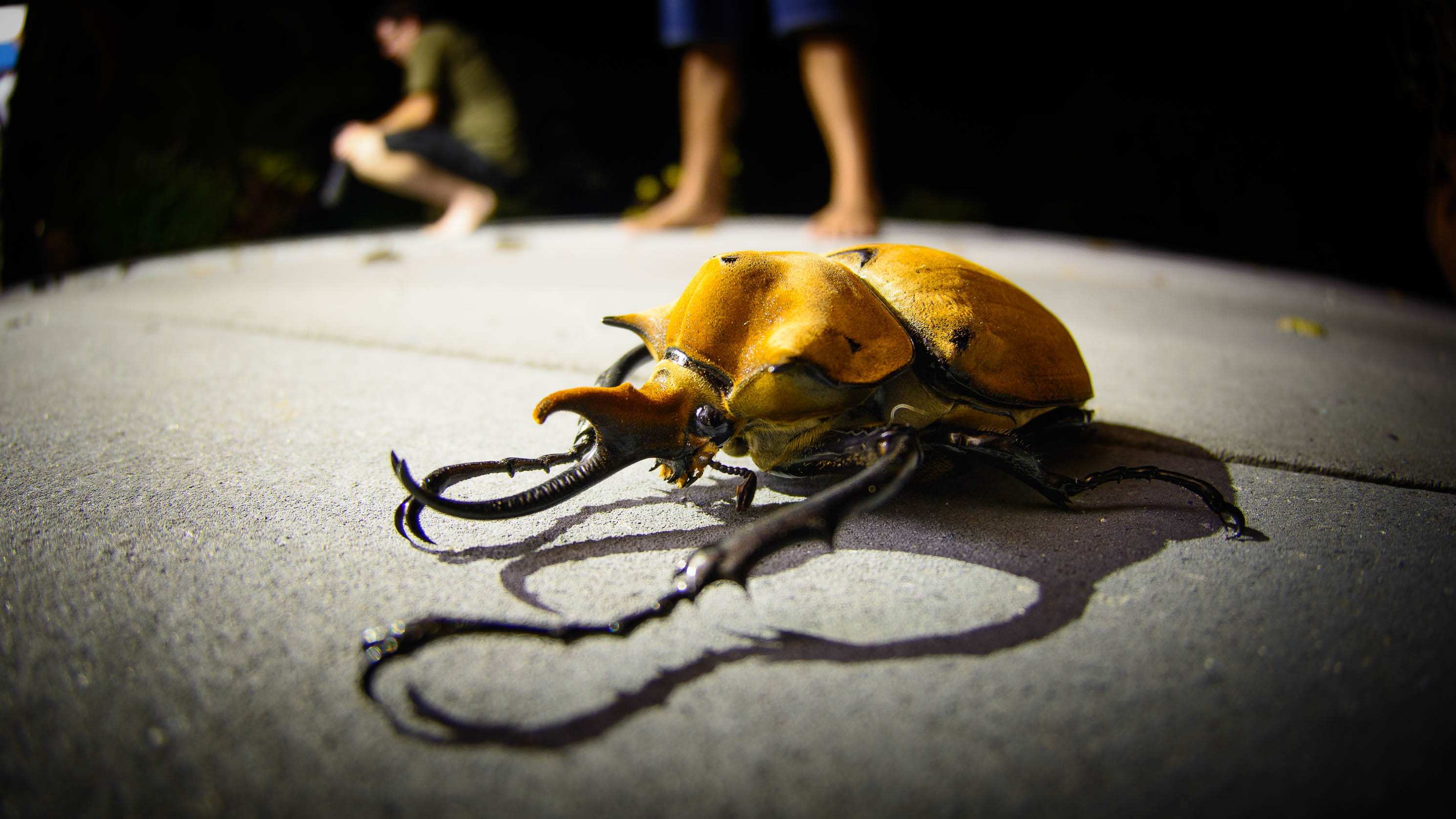