My mother, who died last year five days shy of her 98th birthday, was a talented woman.  It seemed to me as if she could do anything.  She was Martha Stewart before Martha.  She was a talented seamstress and tailor and she made designer clothes  for me well into my adulthood.   Her incredible Halloween costume creations like the red Leslie Salt container that encased me one year and the following year’s sack of Idaho potatoes, won raves at the Halloween parades.  Her design and orchestration of the brick patio in our backyard with my brother and one of his friends as her hod carriers was masterful and belonged in House Beautiful.  She was a weaver, a gourmet cook, a gardener with a green thumb, I could go on.

But one of my earliest recollections about her feats of creativity came one day when I was about 5 years and was outside playing with several of the neighborhood kids.  It was lunch time and Mom told all the kids she’d make them tuna sandwiches.  I don’t recall how many kids there were, probably just three or four.   We all tromped inside and gathered in the small kitchen watching as Mom found cans of tuna and a loaf of Wonder Bread—she didn’t take up baking her own bread until the ’60’s.  But, when she reached in the fridge for the mayonnaise, the jar was almost empty.  There was no time to run to the grocery store, what with several hungry kids waiting  for lunch, so Mom, rather effortlessly, made mayonnaise from scratch! Mayonnaise is one of those things that as a kid, you never consider that it has an origin anywhere but in a jar with a Best Foods (or Hellman’s on the East Coast) label on the outside that comes from the grocery store.  All the other kids had the same notion.  We watched in awe as Mom got her Waring Blender out, dropped in a couple of egg yolks and some lemon juice, added oil and suddenly, there was a blender full of mayonnaise.  Our mouths were agape.  I knew my Mom could do a lot of things, but this, creating mayonnaise from scratch, was magic.

I thought of Mom, magically creating mayonnaise, when I made my first batch of mayonnaise from scratch the other day.  The PaleoRestart program I’ve been following for a couple of weeks sets milestones and one of my milestones this week was to make mayonnaise from scratch.  The Paleo Leap people, those behind PaleoRestart, like to use ingredients that are natural without additives and preservatives and especially nothing that contains soy, an ingredient that is often genetically modified and contains questionable chemicals.The first listed ingredient of Best Foods mayonnaise is soybean oil.    I haven’t become a complete convert to Paleo restrictions yet (I question how some foods are considered “paleo” and others aren’t, and I still wonder when the cavemen started making bacon, and now I’m wondering which came first, Best Foods or caveman mayo ), but I thought I’d try my hand at recreating Mom’s magical mayonnaise.  Then, once made (it took less than 15 minutes from start to finish, including clean up) I decided to continue my SB5000 off camera flash practice.  I set the French canning jar filled with freshly made mayonnaise on my black kitchen table with the flash just to the right of the jar, trying various settings.  This was my favorite result. 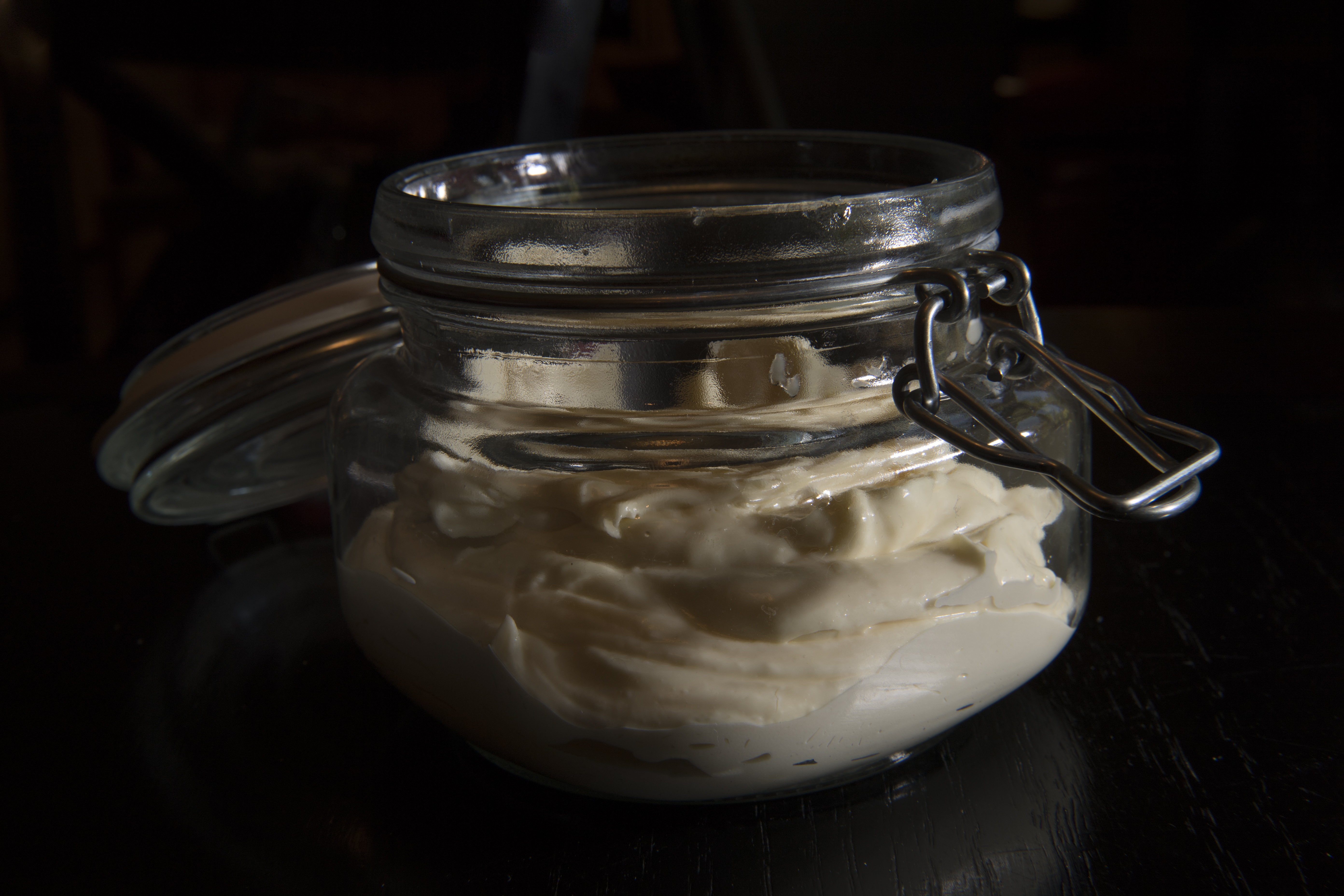