We had dinner reservations for 8PM Tuesday evening at Arume, a Barcelona restaurant in El Raval with excellent reviews. El Raval is a gritty neighborhood undergoing revitalization but that still has some unsavory aspects. The six of us (the entire contingent hadn’t yet arrived in Barcelona) agreed to make the 30 minute walk instead of taking a cab because the evening temperatures were mild and we felt we’d get some additional exercise in preparation for what we anticipated to be a rich and wonderful meal; besides, we wanted to experience a bit of the Barcelona night scene as well.

Our route took us first down La Rambla, a bustling main thoroughfare with a wide center median made for walking, outdoor dining, and people watching, then onto a cross street Stu had been on earlier in the day, then into darker and narrower streets as the neighborhoods turned from cosmopolitan to urban and gritty with increasing amounts of graffiti on walls and corrugated roll down doors. After a number of wrong turns, we finally reached the restaurant forty minutes late for our 8PM reservation. But, the restaurant was closed. Someone came out to tell us that a water leak had closed the restaurant the day before but they had made reservations for us at another nearby restaurant. He led us there but we discovered that this restaurant had given away our reservation when we were a half hour late. It is fascinating to see these tiny, hole in the wall bistros filled with people in areas that appear so run down and unsavory. The original restaurant employee disappeared for a few minutes and returned with a third option. He led us to Las Fernádez, two streets away down another dirty, alley-like street with more graffiti covered walls.

We were tired from our walk and hungry but a bit concerned about this totally unknown option until Martila, the hostess, welcomed us. She seated us at a small table and when we asked if we could combine two tables to make it more comfortable to accommodate us all, she told us that all tables in the 10 table restaurant were reserved for both seatings and we all had to sit at one.

The menu options were extensive with many daily specials and we took advantage of those, as well as enjoying some Spanish Tempranillo, a full bodied red wine. We shared several tapas then we each had one of the daily specials. The food was wonderfully delicious, incredibly fresh, and mouth wateringly flavorful. The meal ended with complimentary glasses of locally made liqueurs. We were thrilled that the unexpected change of plans resulted in such a delightful gustatory experience and introduced us to an area of Barcelona we would not otherwise have seen.

Here are a few shots from the evening, taken with my new Sony point and shoot.

The Group: Joe, Me, Donna (the group organizer and our travel agent), Charleen, my friend who asked me to join the group, Stu, and Stu’s wife, Janet. And an aside, as we went through the TSA checkpoint at the Sacramento airport, Donna asked me if I used to work at EDD. Of course I did work there for 28 years. I told her I thought she had looked familiar to me when I met her a couple of weeks before and that I felt a connection to her and enjoyed her sense of humor. When we finally managed to connect the dots, it turns out that Donna hired me in 1979. We had worked together on a project and she asked me to join her office on a new project that she would manage. We both had different colored hair and different names at the time and it was, after all, 35 years later so I guess we have an excuse for not instantly remembering each other. 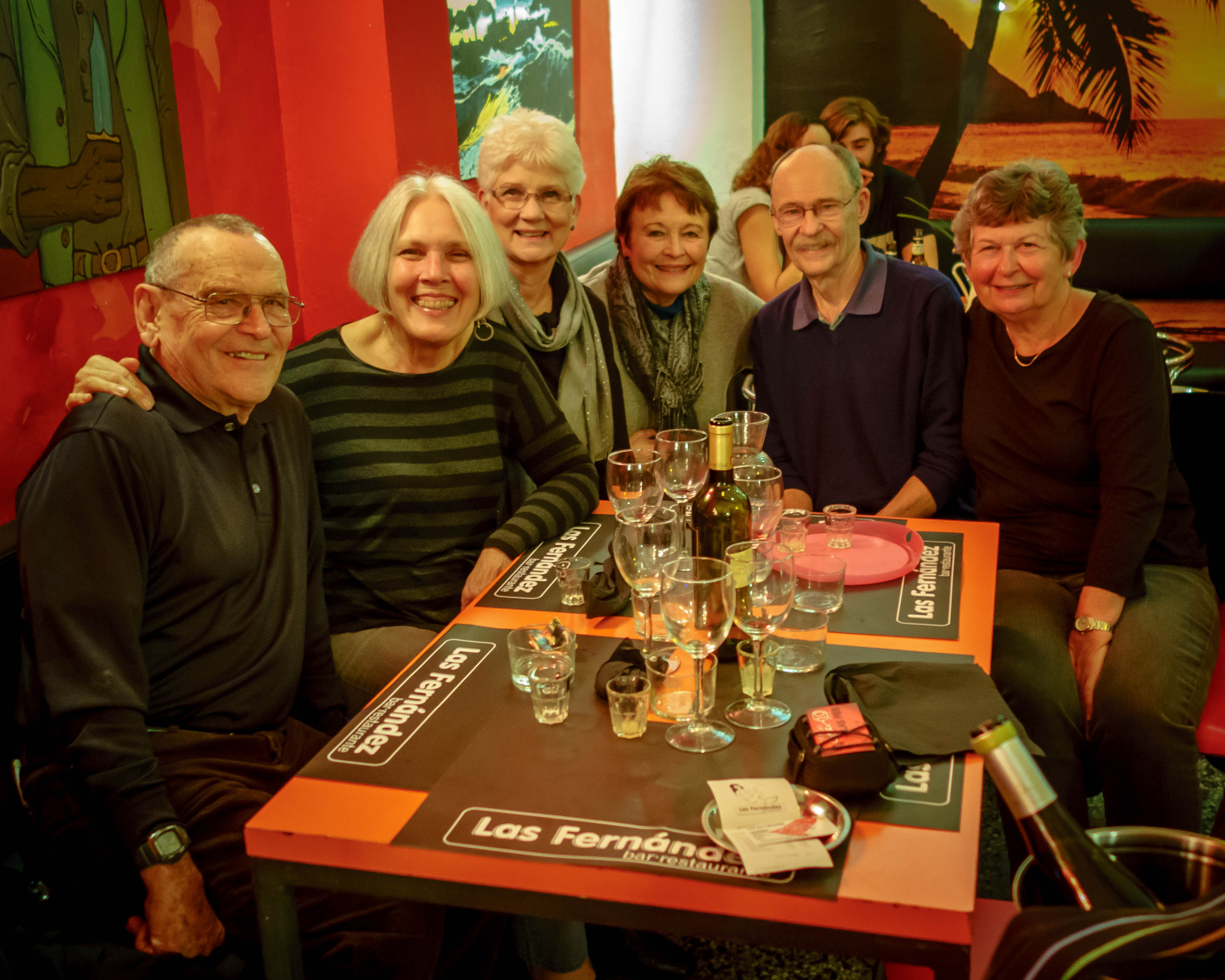 La cazeulita del dia, focaccia with smoked salmon and the “cod fixed a thousand ways, ask how it is today.” Grilled with peppers and plantains. 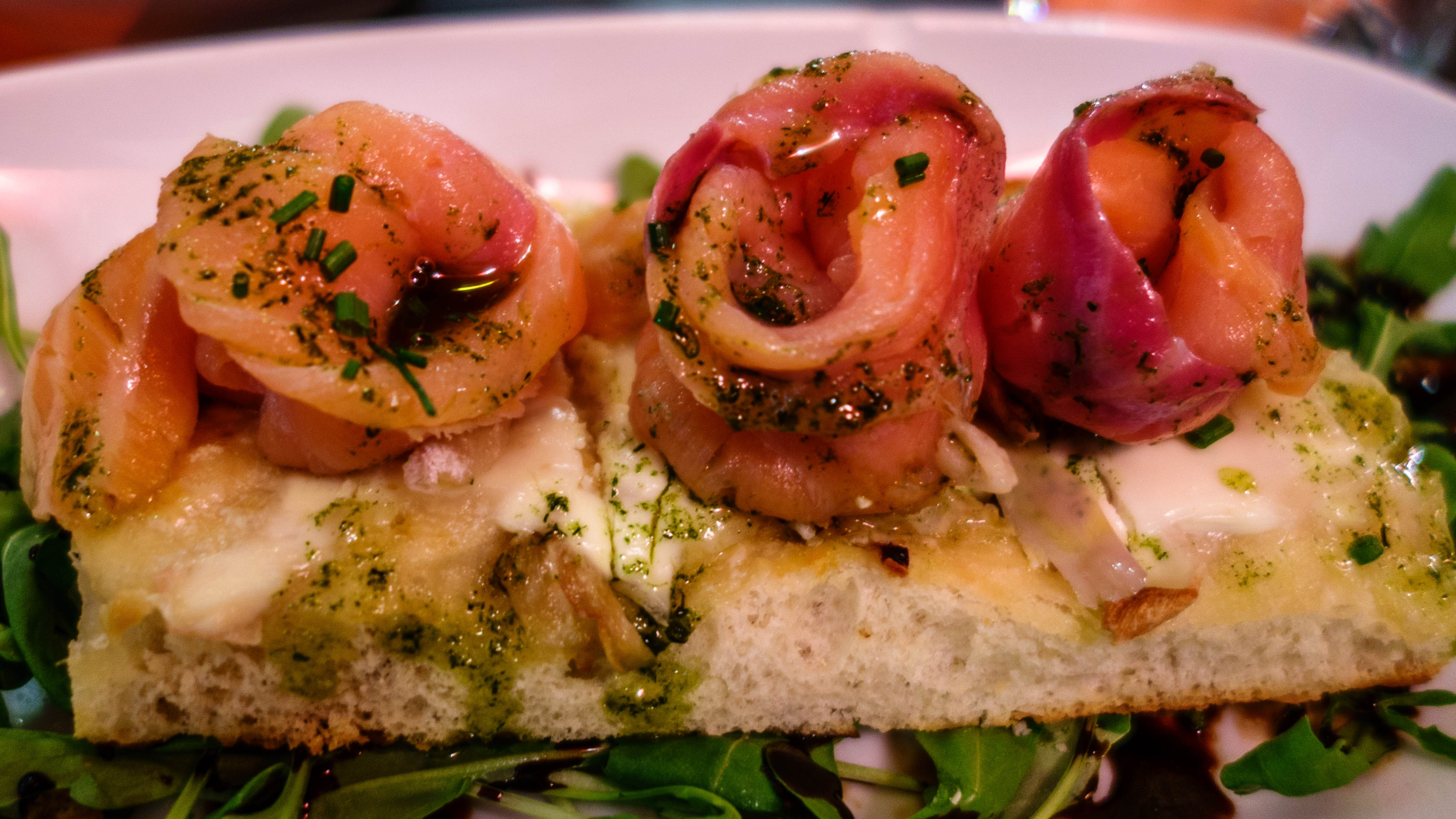 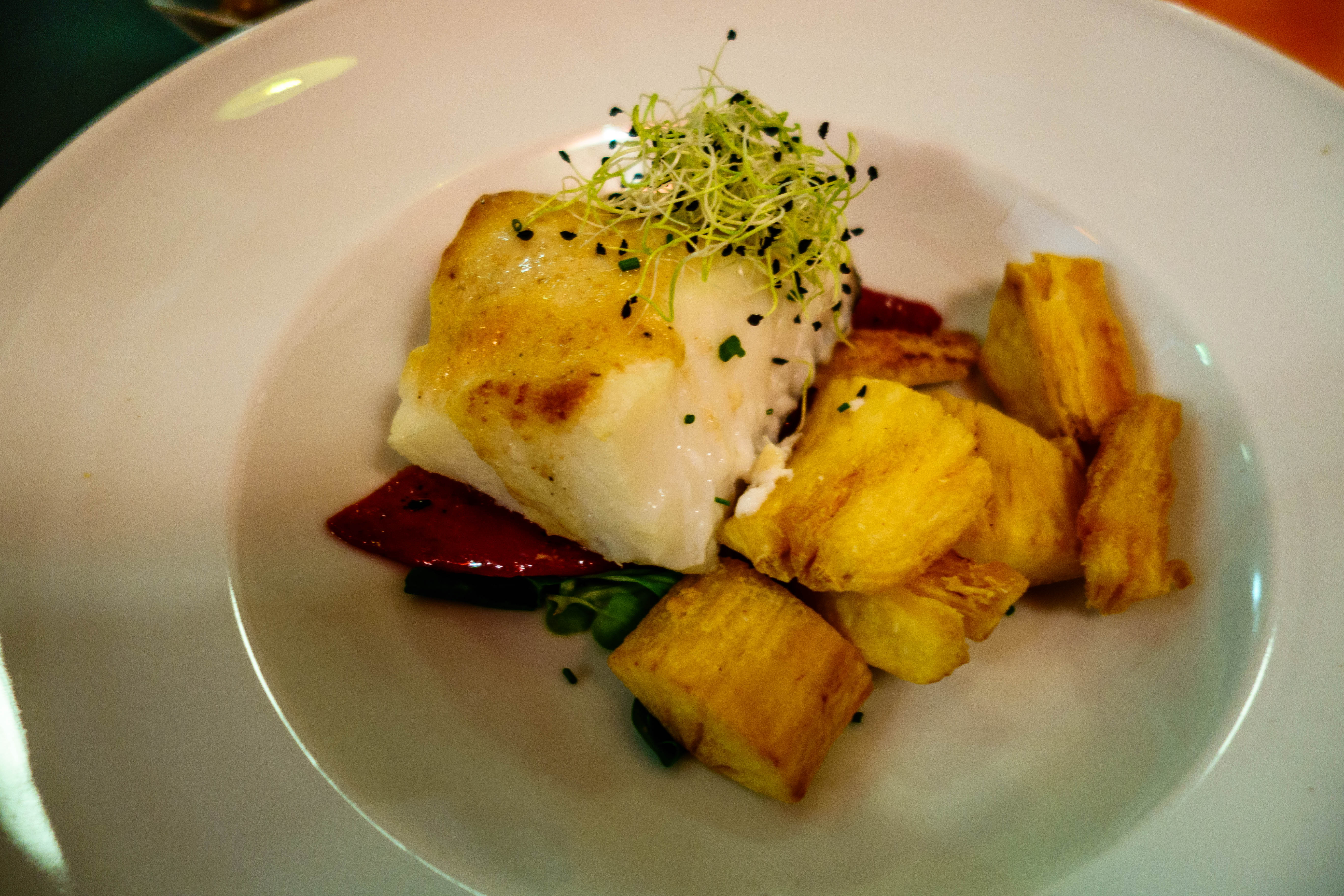 The street outside Las Fernádez, the red door on the left. 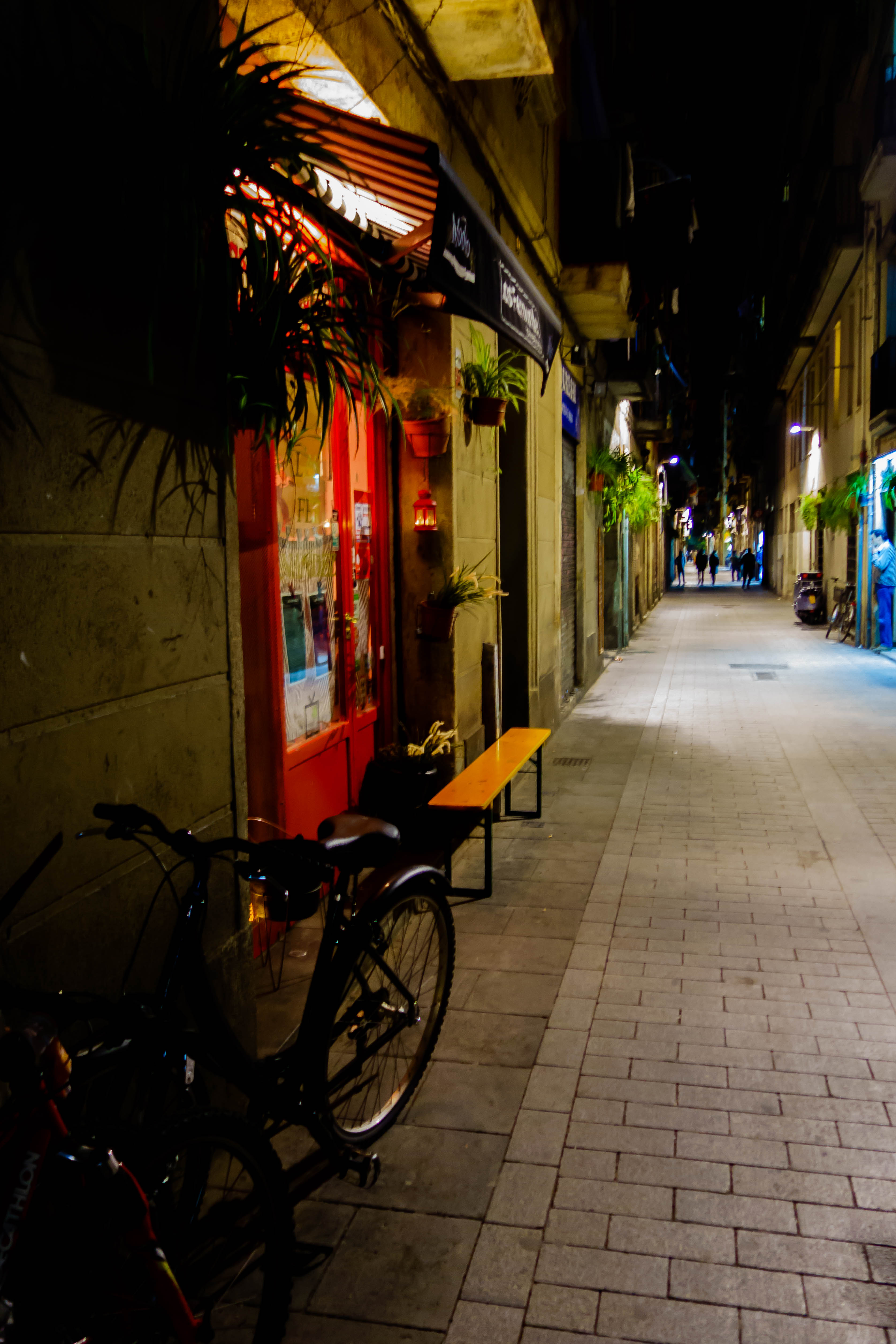 Across the street from Las Fernádez, and Donna, Joe, Charleen, and Stu walking ahead. Janet and I lingered to take photos. We didn’t know the guy in the white sweatshirt. 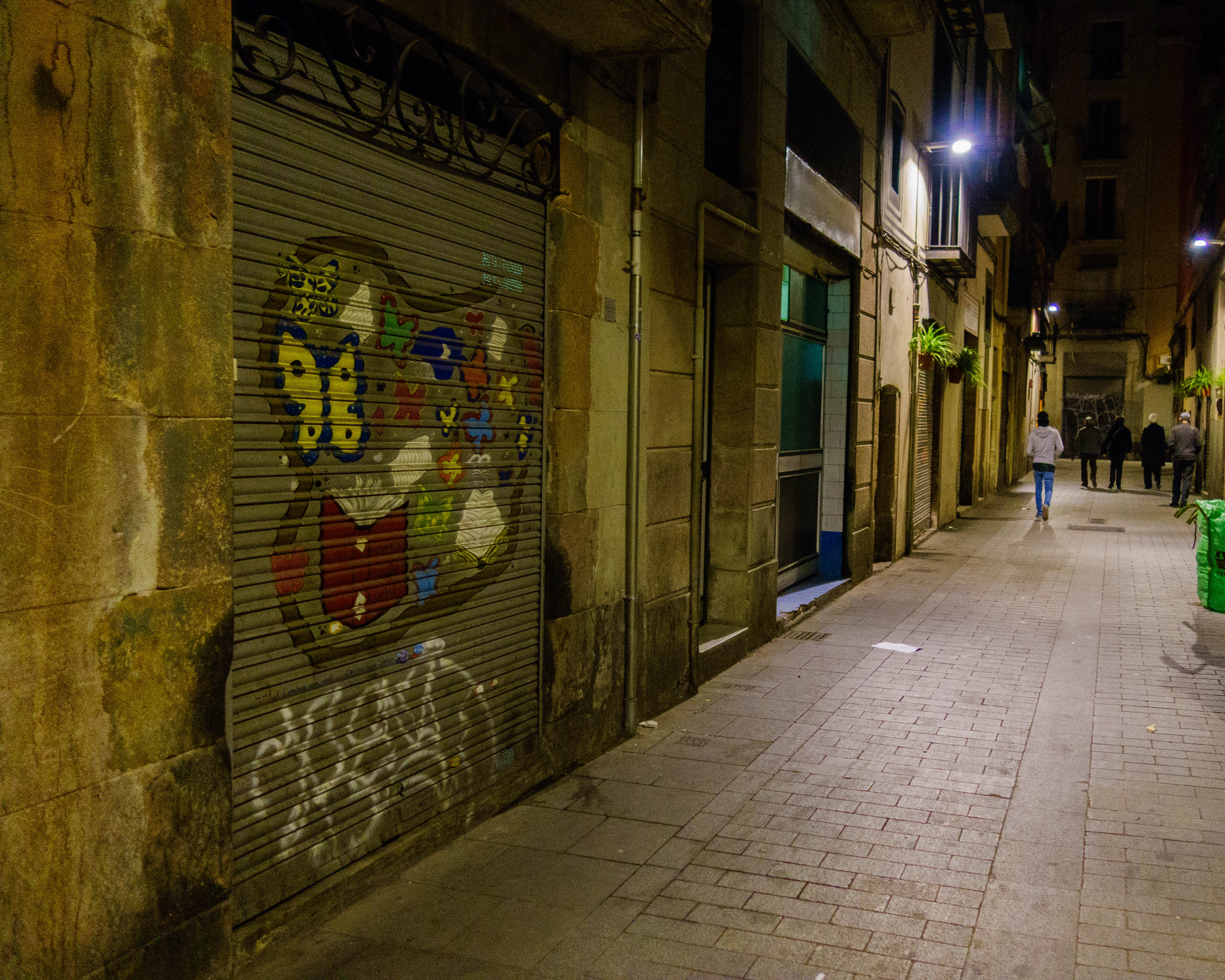