On Thursday afternoon, I drove up to Foresthill on an errand. I’d never before driven on Foresthill Road in the foothills and I thought the area was beautiful. On the way home, I pulled over just to look. And this “blue pine” is what I saw. I wonder if it’s a new species of pine or if someone was trying out a new canvas for his graffiti? 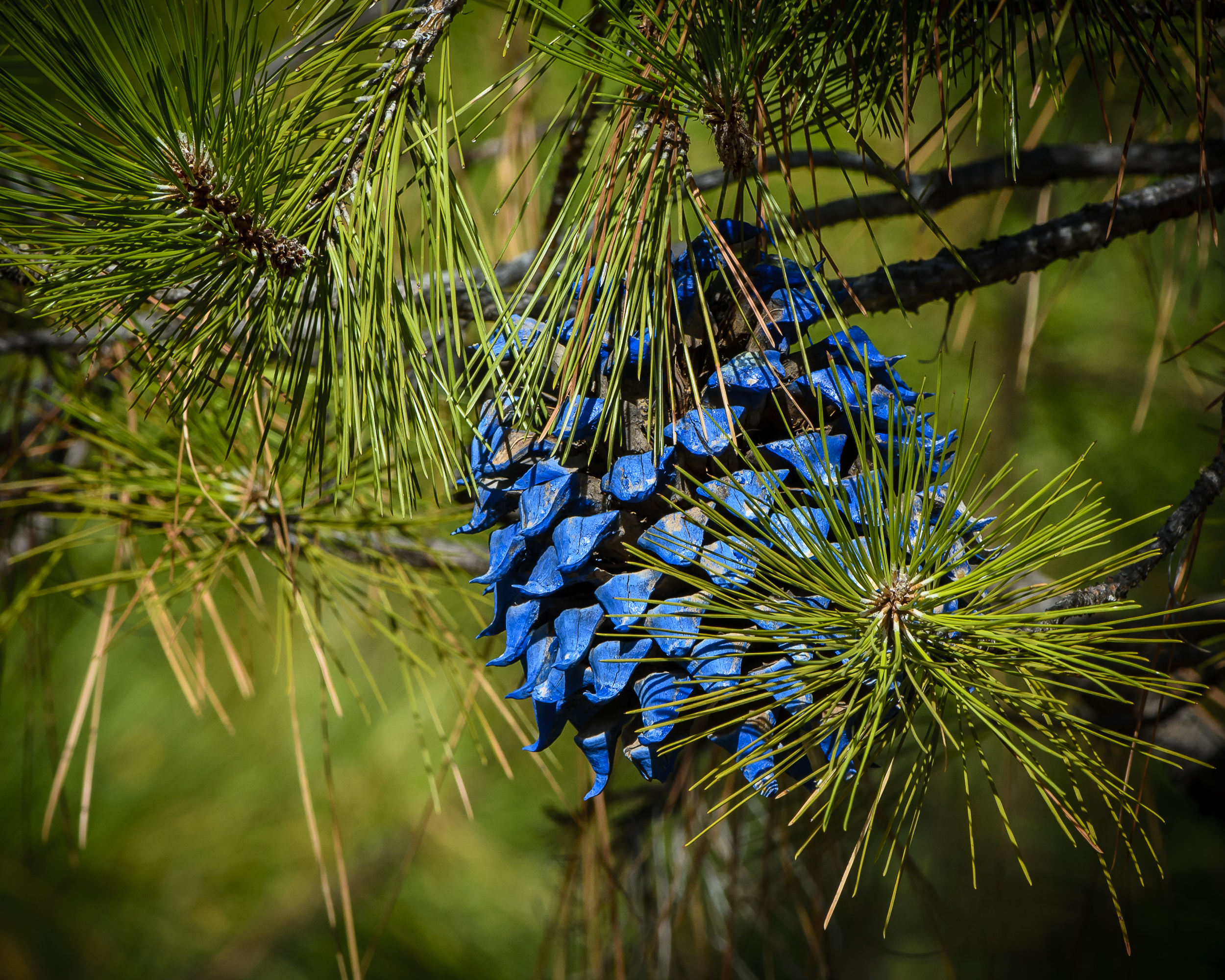 I took a short walk Tuesday afternoon around my neighborhood to make sure the new walking shoes I bought for my trip were comfortable and to see if I could finally get my FitBit to register 10,000 steps. I was successful on both counts; the shoes were perfectly comfortable AND, I ended up with 12,000 steps, slightly more than 6 miles, for Tuesday. I took my D800 with the fisheye lens with me just to see what neighborhood shots would look like through a fisheye.

This is the most interesting thing I encountered on my late afternoon walk. I think this is supposed be a “green goblin,” as he was hanging from a tree along with several other Halloween-themed paper lantern like globes. It’s not too scary or eerie but I thought the sun peeking over the edge made him a bit more interesting than the others and besides, I couldn’t get up close to the others without stepping on a stranger’s lawn so I kept my feet on the sidewalk. 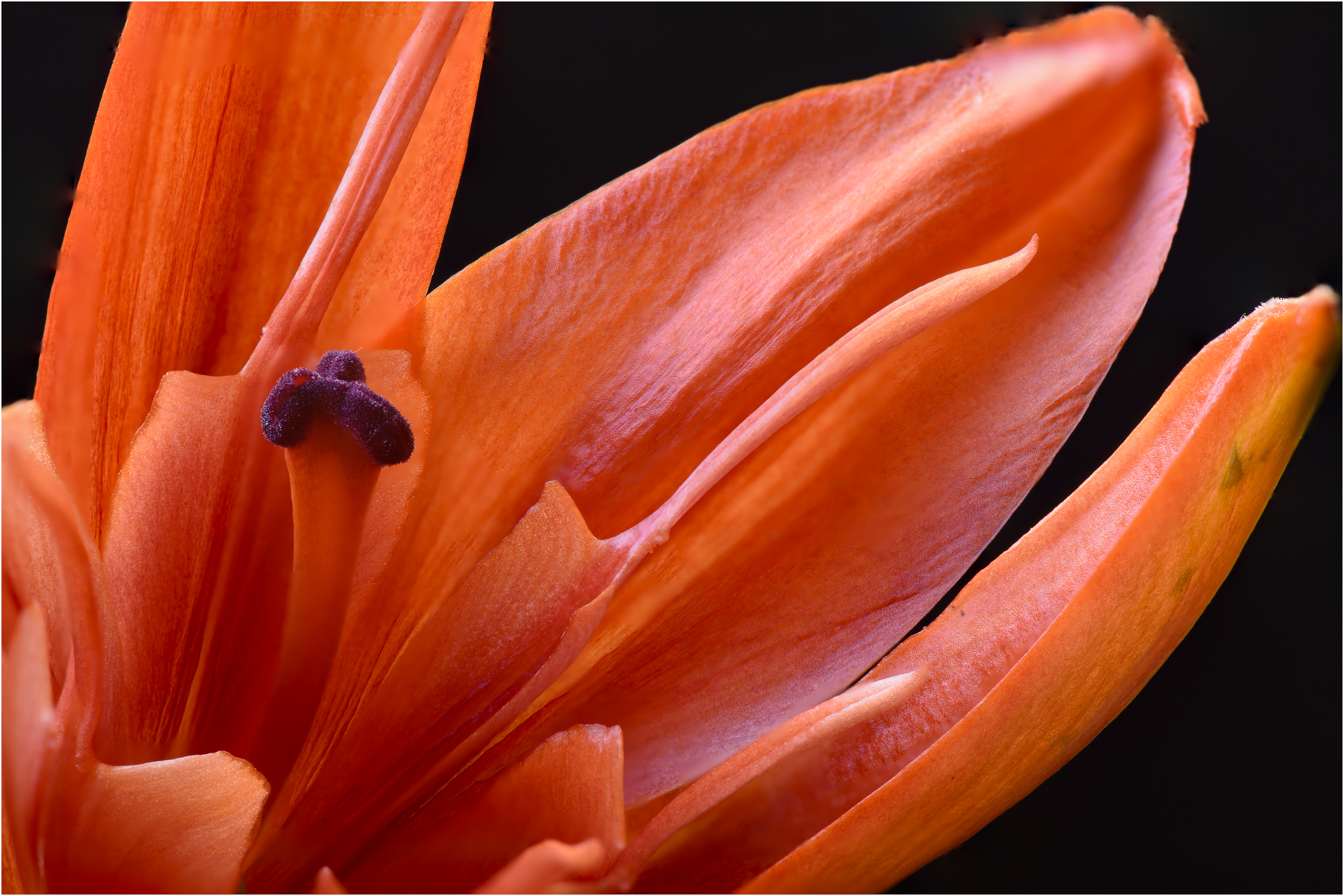 My friends Katie and Carly joined me for dinner Sunday in a Halloween themed evening during which we tried several different appropriately named wines. We had four from which to choose so we pulled numbers from a hat to pick the order of consumption. “Zombie Zin” was first up. And this is the only shot I took all evening so there is no photographic record of “Ménage à Trois Midnight,” “Apothic Dark,” or “3 Girls,” and, the Bogle Phantom didn’t get picked in the draw so that bottle awaits; Halloween, perhaps? So readers of this blog won’t get too alarmed at our wine consumption, we didn’t finish the “3 Girls” Cab and “Apothic Dark” was an already opened bottle I had on hand. We sipped the “Zombie Zin” while taking precautions against vampires with roasted garlic spread on crostini. 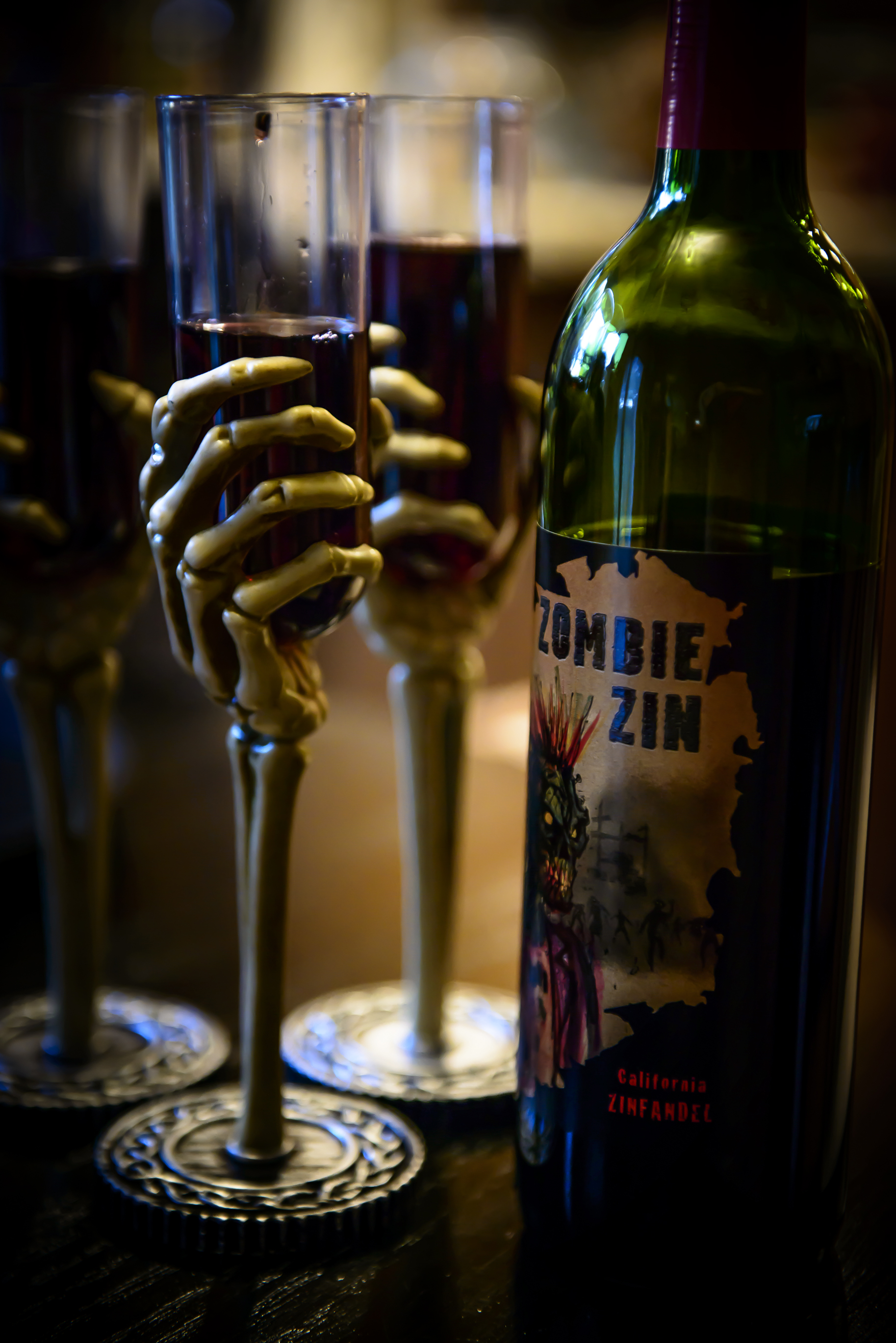 One of the hummers was enjoying the light sprinkling of rain Saturday morning. 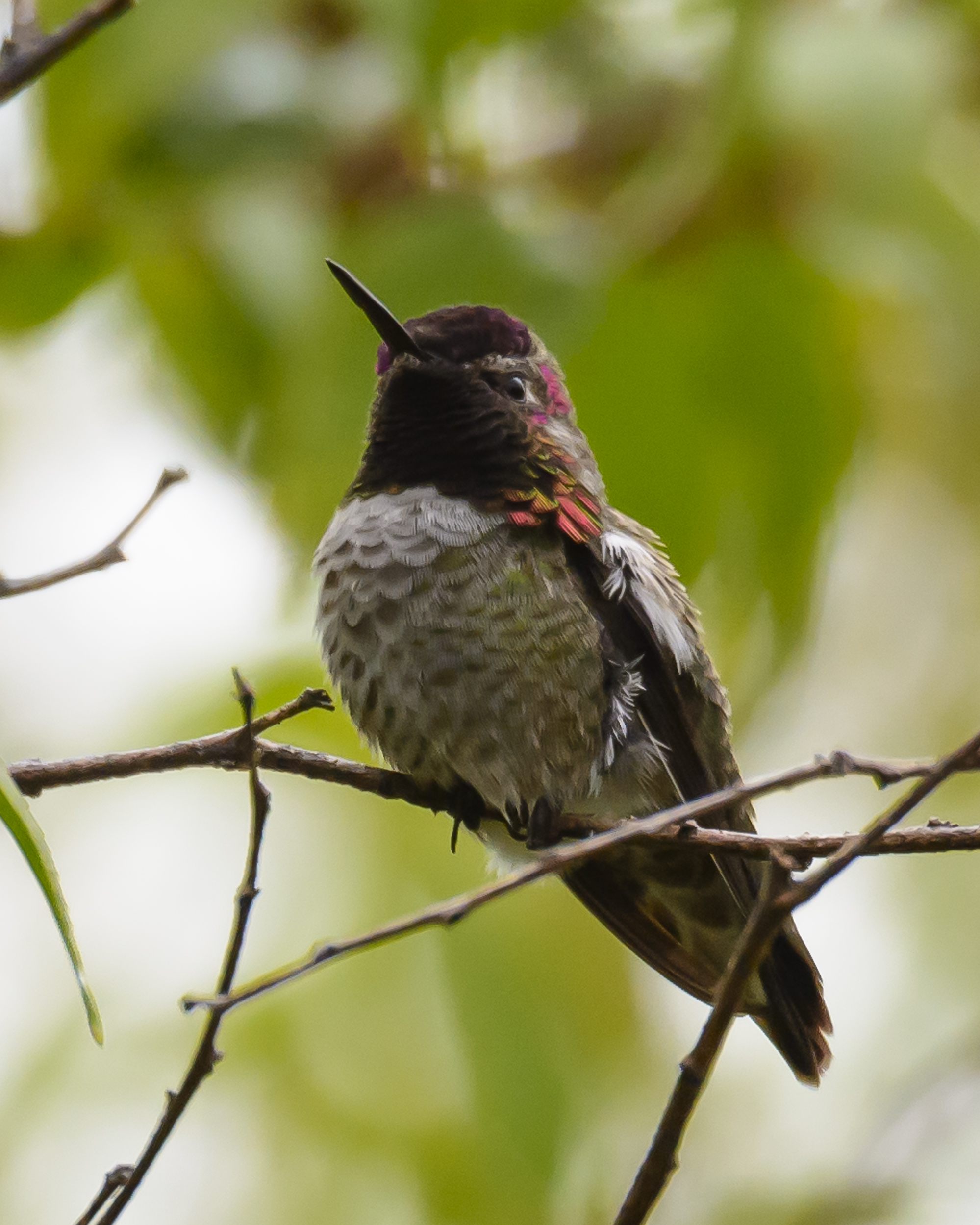 I couldn’t resist using my new fisheye lens to take a selfie. But since I used the mirror to get my reflection, I decided to flip the photo so it looks as if it were taken from inside the mirror looking out at me.

Hmmm. I wonder if the Mad Hatter or White Rabbit might be lurking in there too? Uh oh! I guess I am in Wonderland after all. I think I see Tweedledum and Tweedeldee with Mady trying to pretend she doesn’t know these people. 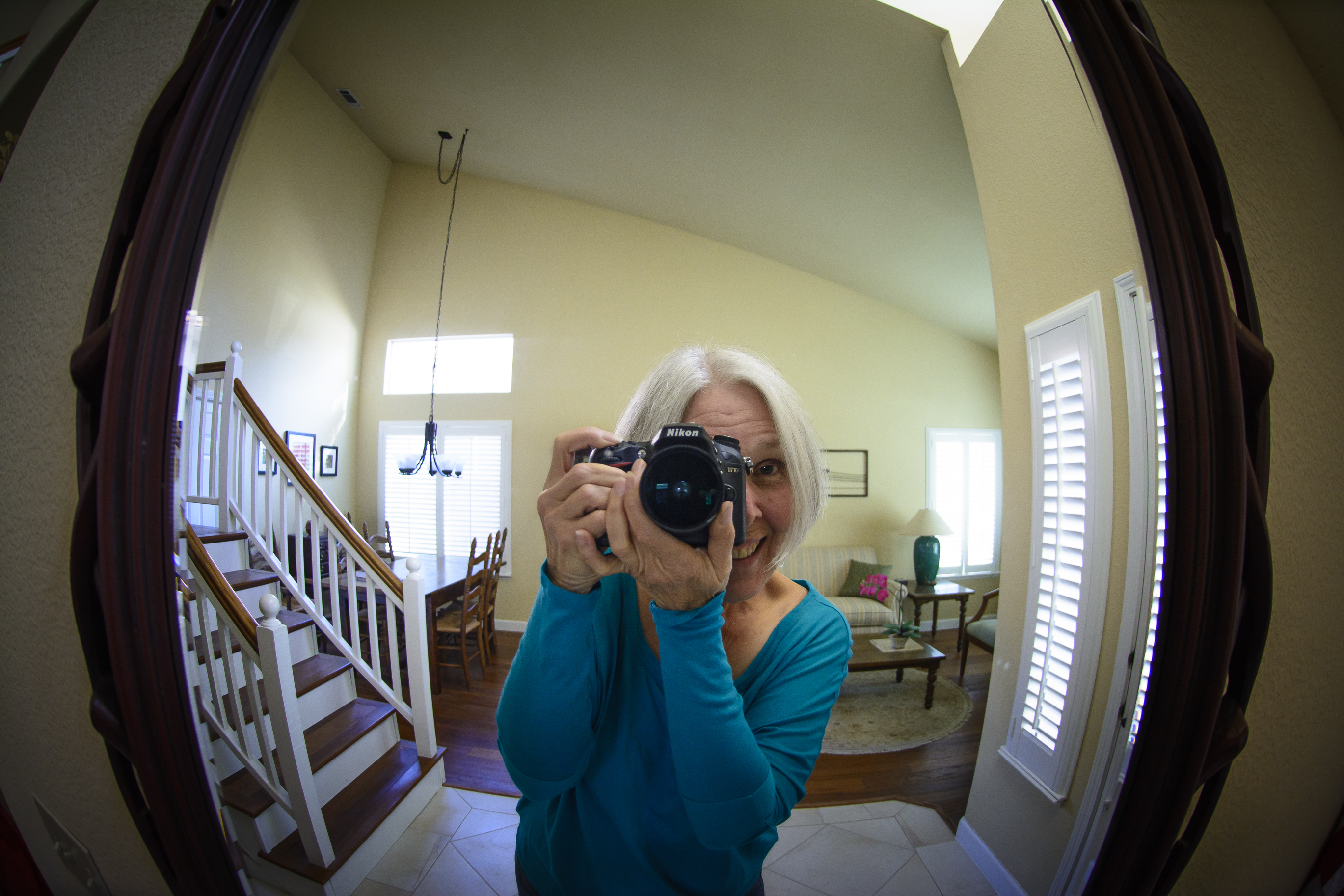 Tweedledum and Tweedledee, or is it the other way around? 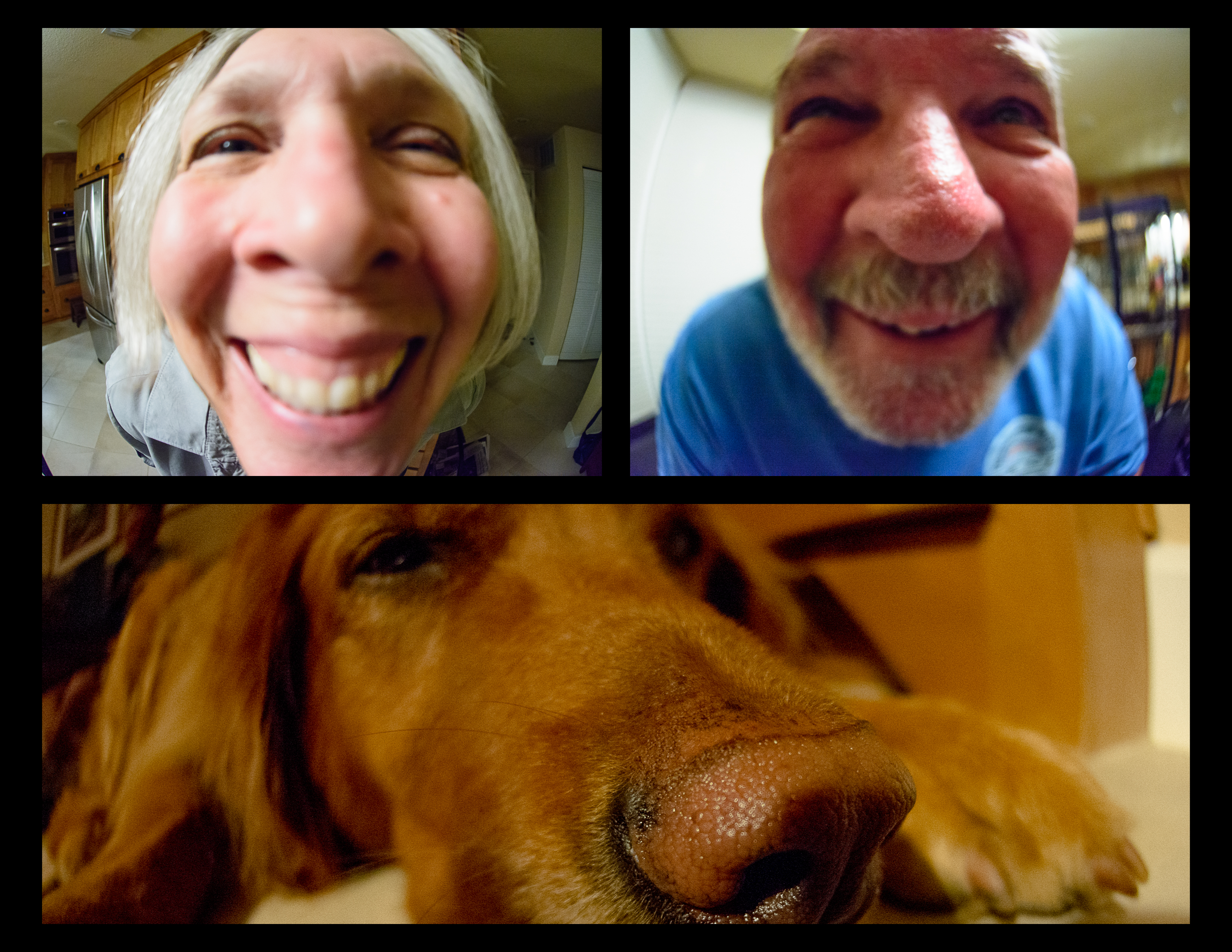 I missed the partial solar eclipse on Thursday but didn’t even know to look for it until my photo buddy, Melinda, texted me to make sure I knew about it and what I needed for my lens to make sure I didn’t ruin my sensor. I was out and about during the eclipse but because it was mostly overcast, the sky was just a bit darker. About 5:30, as I drove down my street headed home, I noticed a fire rainbow as the sun began to dip a little so after parking in my garage, I grabbed my camera, ran to the middle of the street (perhaps a bit more dangerous than pointing my camera directly at the sun…at least for me) and fired off a couple of shots. 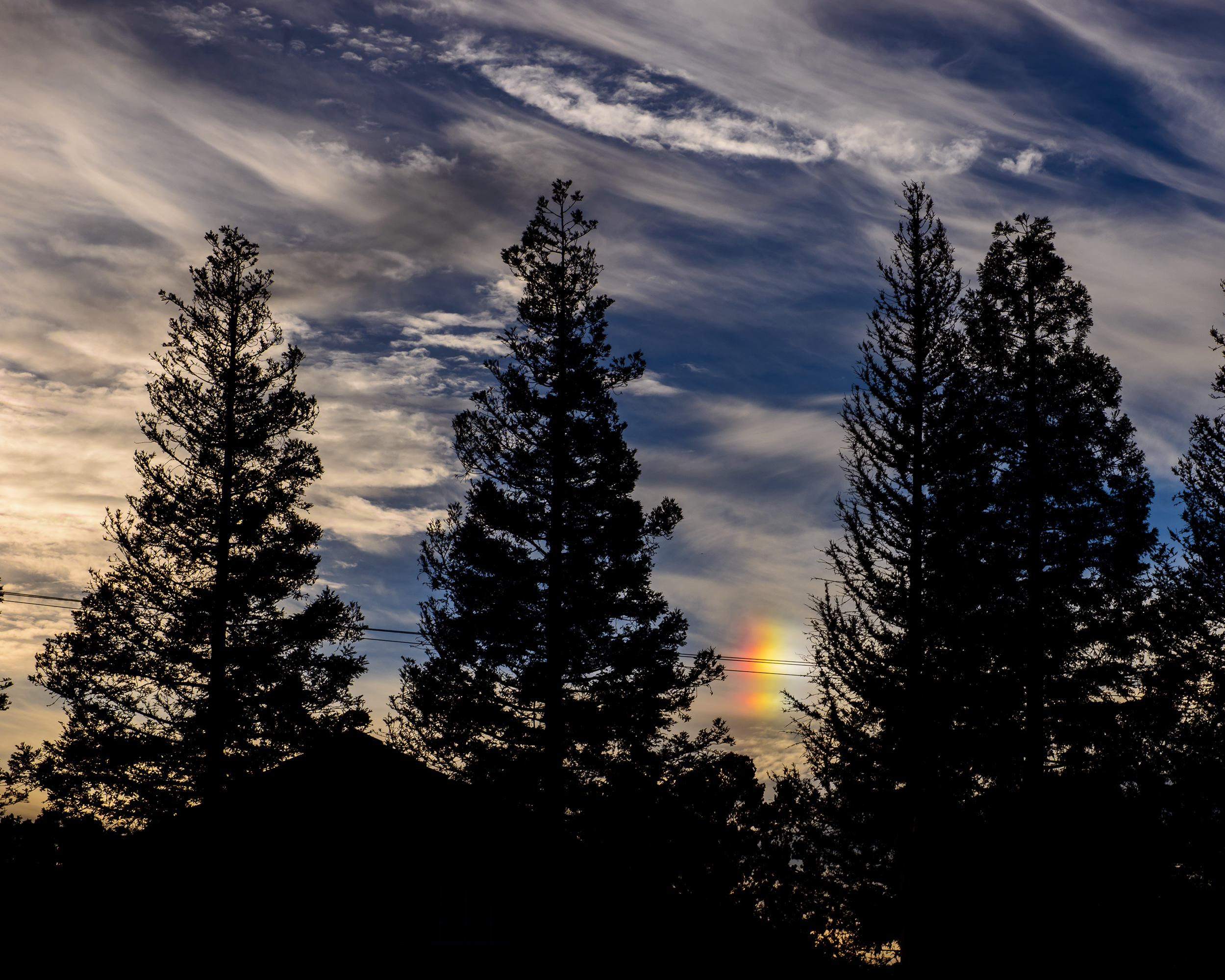 I brought home a bag of gourds and mini pumpkins and decided they’d make a good subject. I’ve never really thought of an uncarved pumpkin as being sinister but when I added a dark vignette to this closeup grouping, I thought they looked a bit ominous despite their minuscule size. 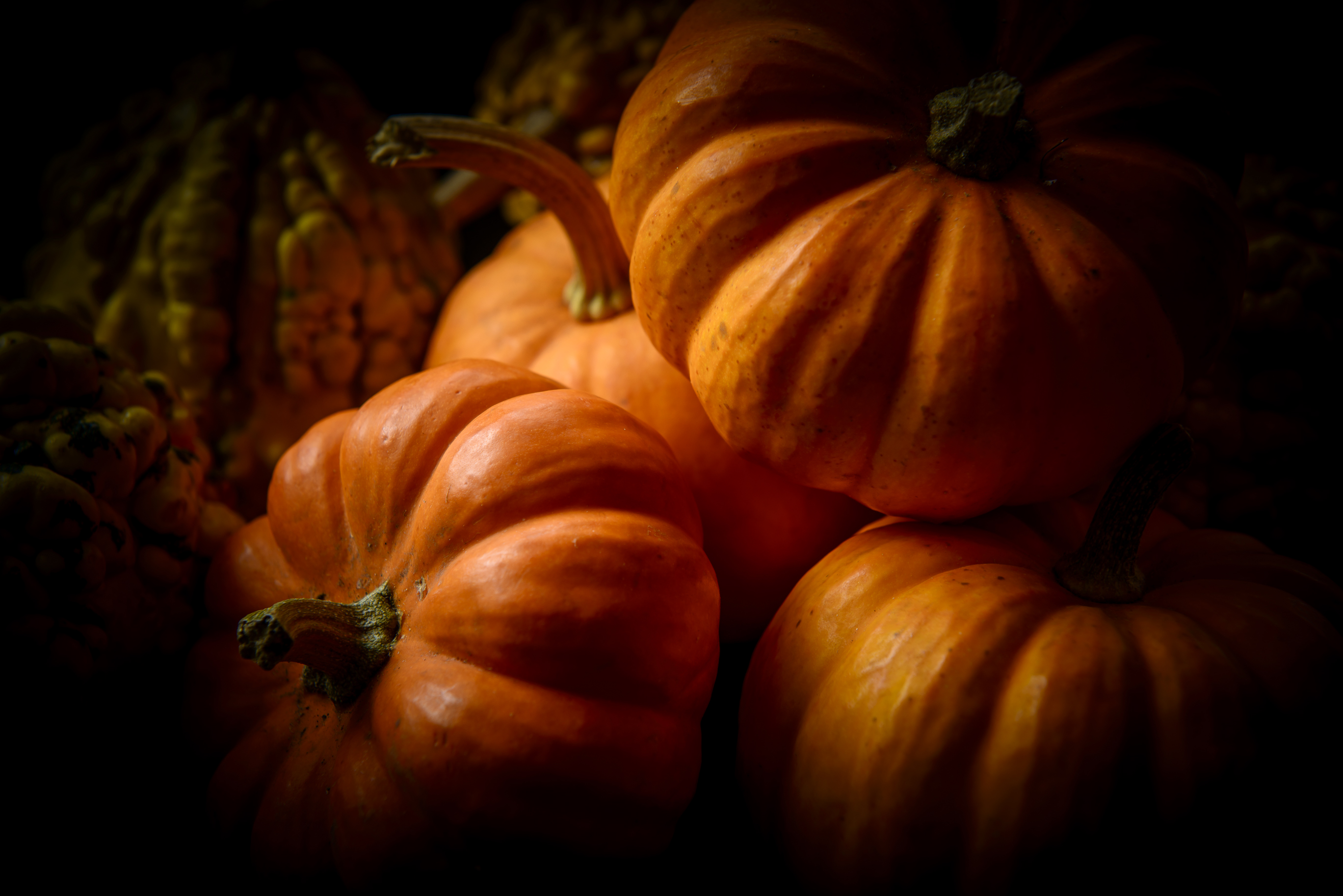 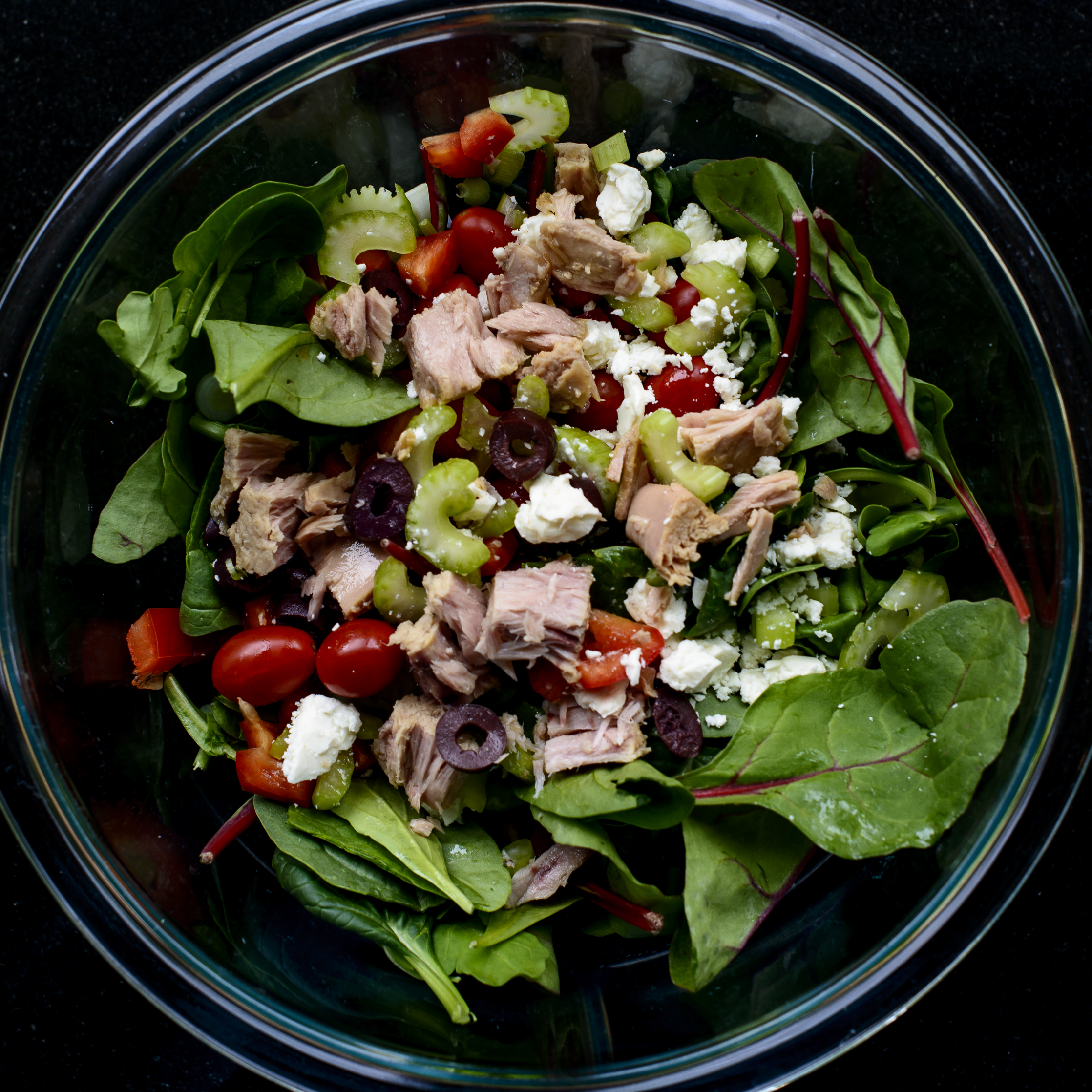 I’ve been working’ on the railroad … railroad museum photos that is. The museum is filled with dioramas depicting everyday rail activities. And although most of the figures in the museum are modeled after volunteer docents making them very lifelike, I was most struck by the silhouettes of the roundhouse workers that were just that, silhouettes cut from plywood. The backlighting was what caught my attention. And the last shot is a gear, or something, on a piece of rolling stock that would have been serviced by the roundhouse workers.

Dinah won’t you blow your horn? 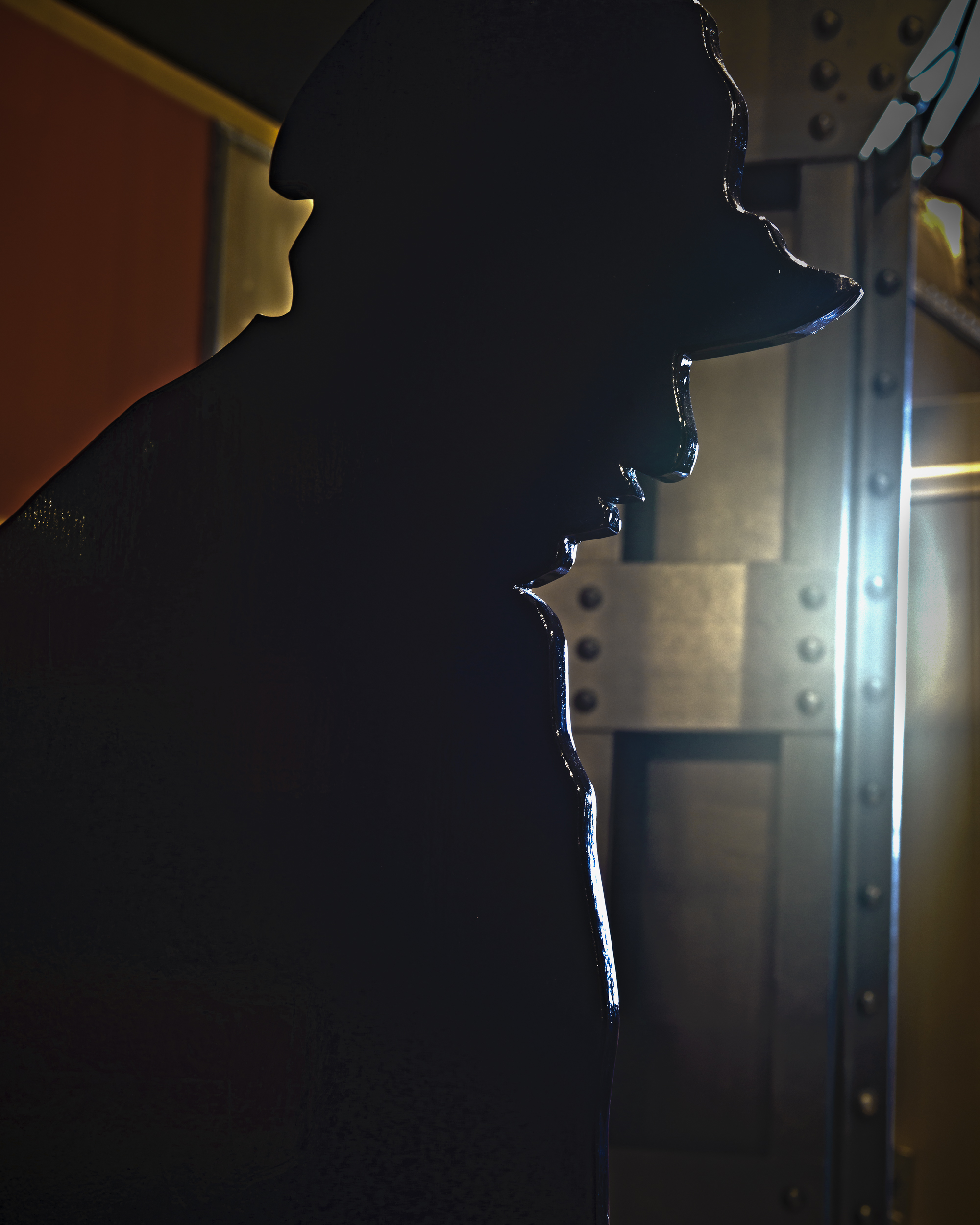 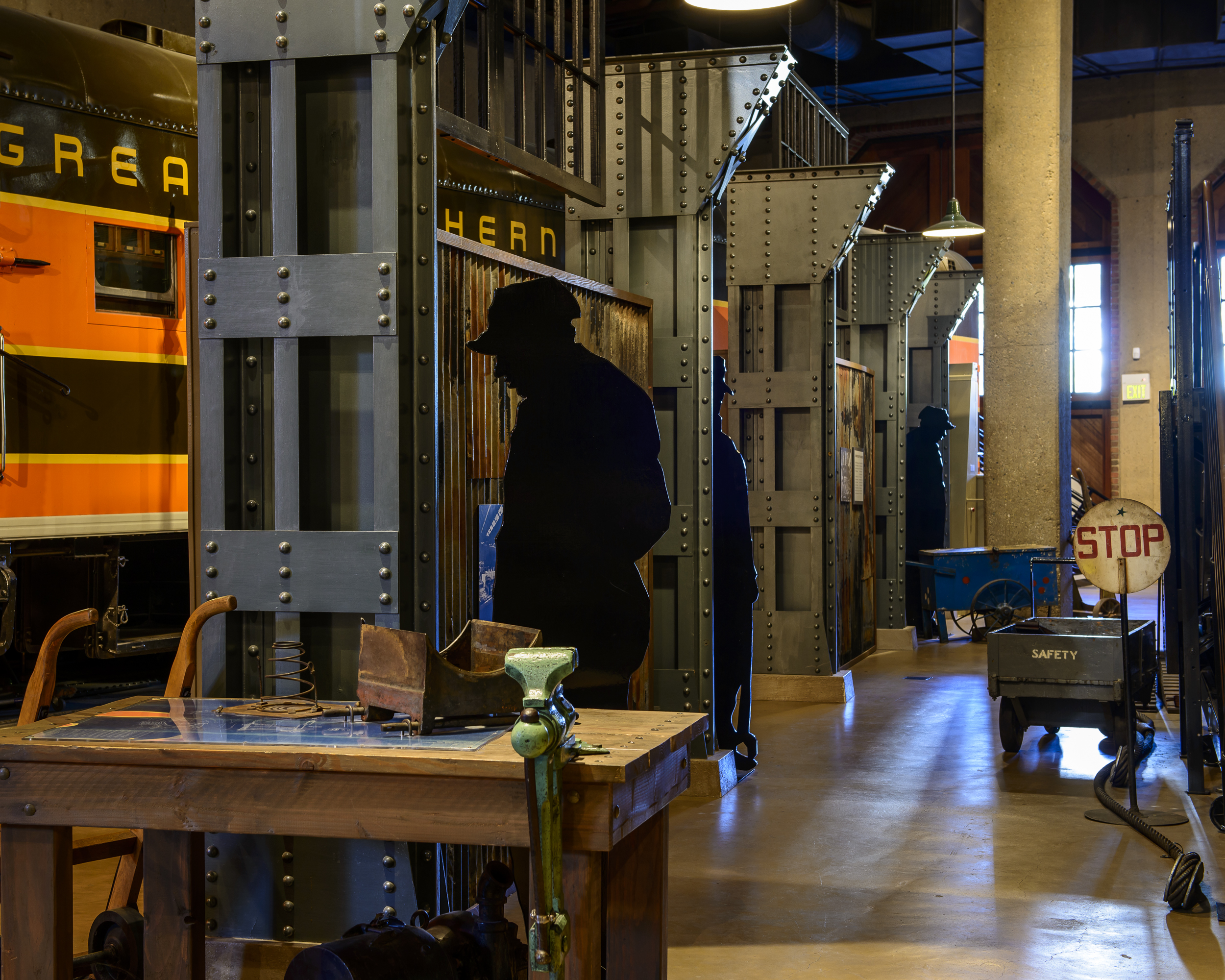