Sunday was the annual open house for the California Foundation for Birds of Prey (CFBP), a local raptor rescue group for which I volunteer.  CFBP’s Golden Eagle Rehabilitation Program was developed ten years ago and now encompasses the Pacific Flyway states of California, Colorado, Idaho, Montana, Nevada, Oregon, Utah, and Washington.   The program’s guidelines have been widely distributed to Federal and State wildlife agencies in those areas with promising results.   The rehabilitation techniques and recommendations in the document address the unique physical and behavioral traits of Golden Eagles, and the challenges inherent in the successful housing, training, conditioning, and release of suitable candidates.  Master falconers take on the responsibility of the lengthy rehabilitation of Golden Eagles with the ultimate goal of release to the wild.

To date, more than 25 eagles have been released or have become education birds.  Currently there are 9 eagles in the program, including Vickie, a Golden Eagle named for Vickie Joseph, DVM, a renowned avian veterinarian and founder of CFBP.  Vickie (the Golden Eagle) is here with her Master Falconer Tony Suffredini for a final physical evaluation (by Vickie the vet) before being released.  She and Tony showed off her hunting abilities with a car chase, using a remote controlled car trailing a “rabbit” lure.

Last year was Vickie’s first free flight in rehabilitation and she performed perfectly.  Because of the layout of the area, the photographs I took of that flight last year were “butt” shots.  So, this year, I asked Tony where I could position myself for better photographs without interfering with the flight.  He put me in the perfect place and steered the remote controlled car directly toward me.  This sequence shows Vickie pursuing the car, flying directly toward me, then pouncing and capturing the prize.  The last shot is Vickie and Tony after the performance.   The wires dangling from Vickie’s legs hold a telemetry device that tracks the bird.

This year, I invited the Placer Camera Club to the open house and about 14 of us descended on the rural Lincoln property that houses huge flight chambers and mewses and lots of raptors.  What a fun afternoon. 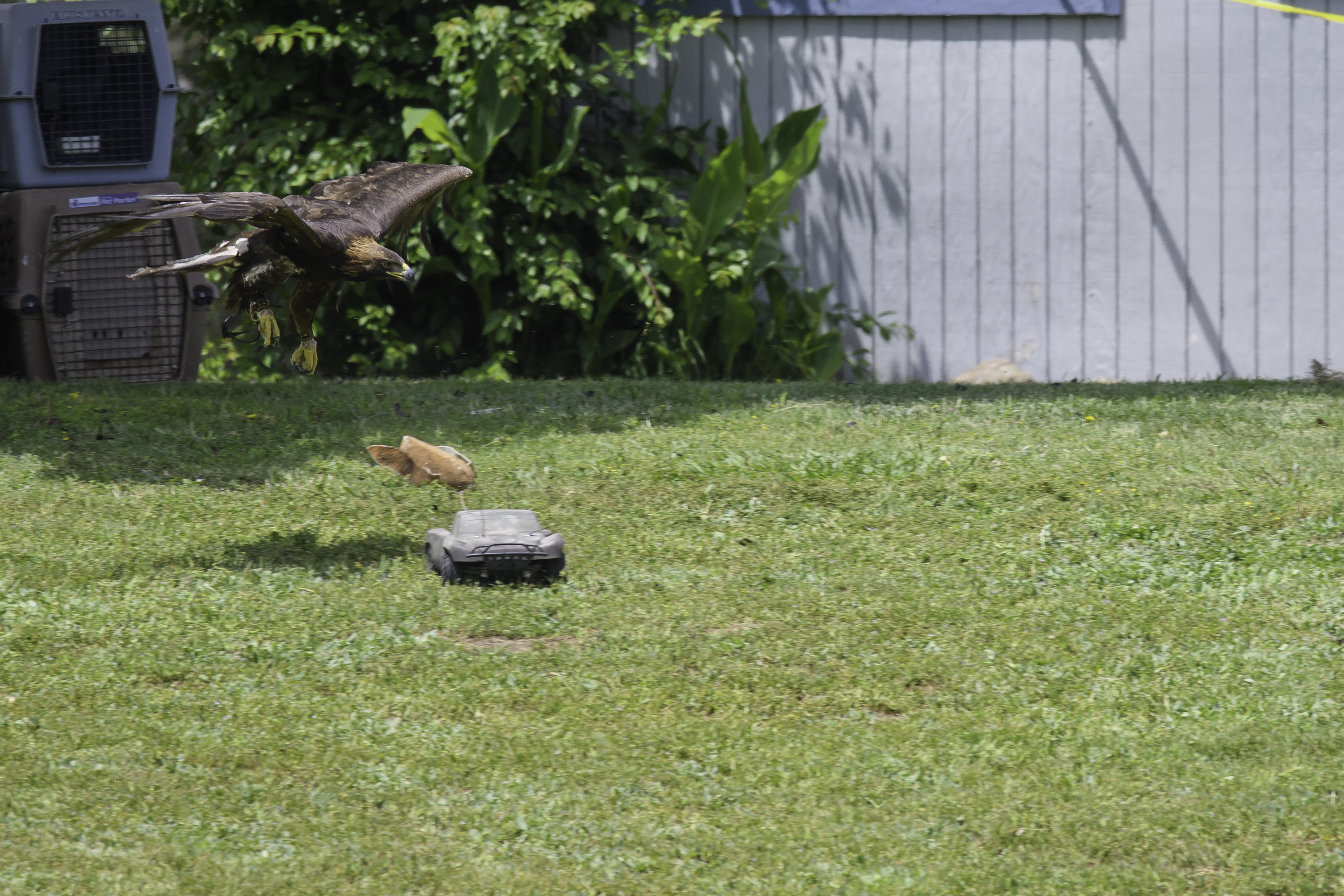 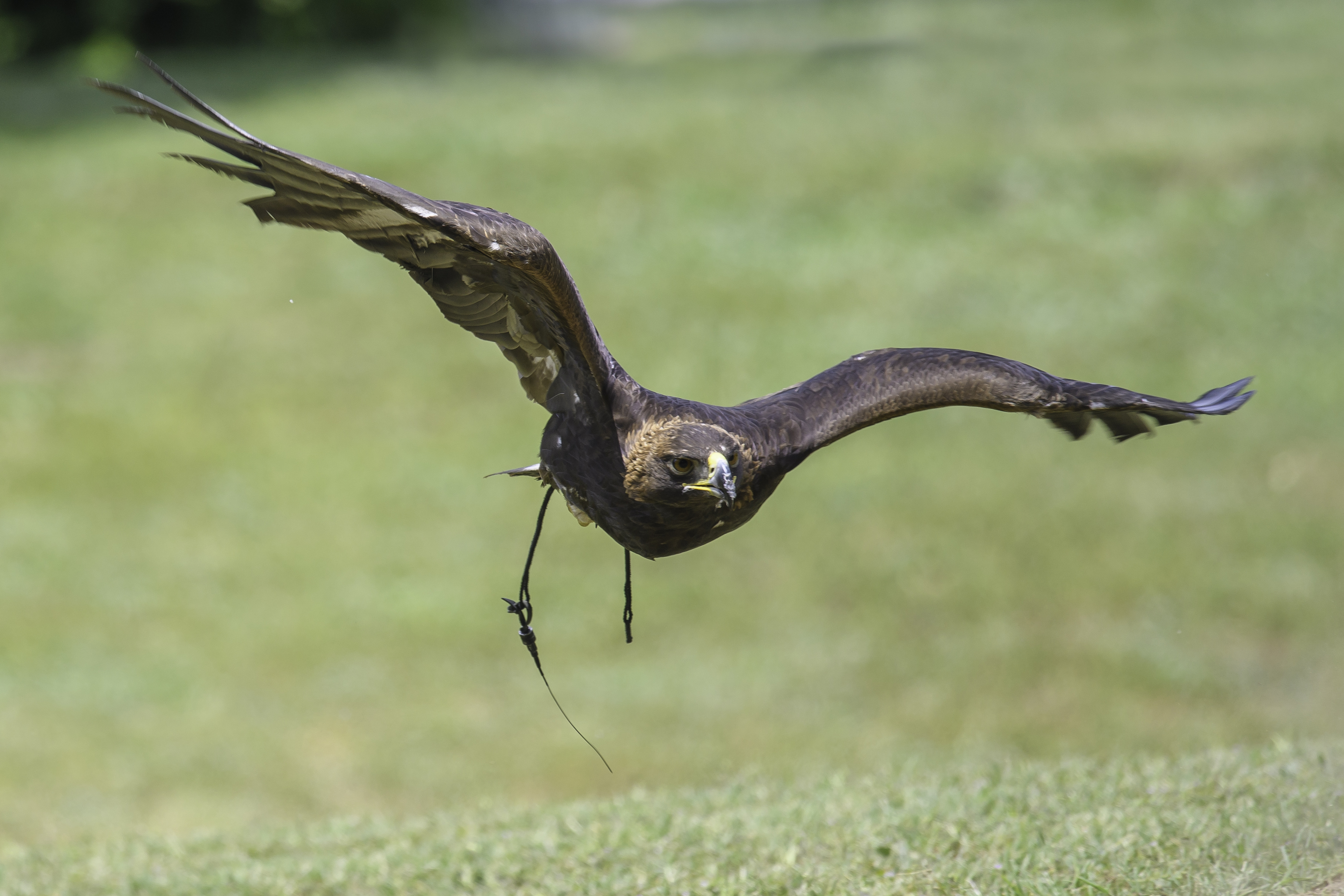 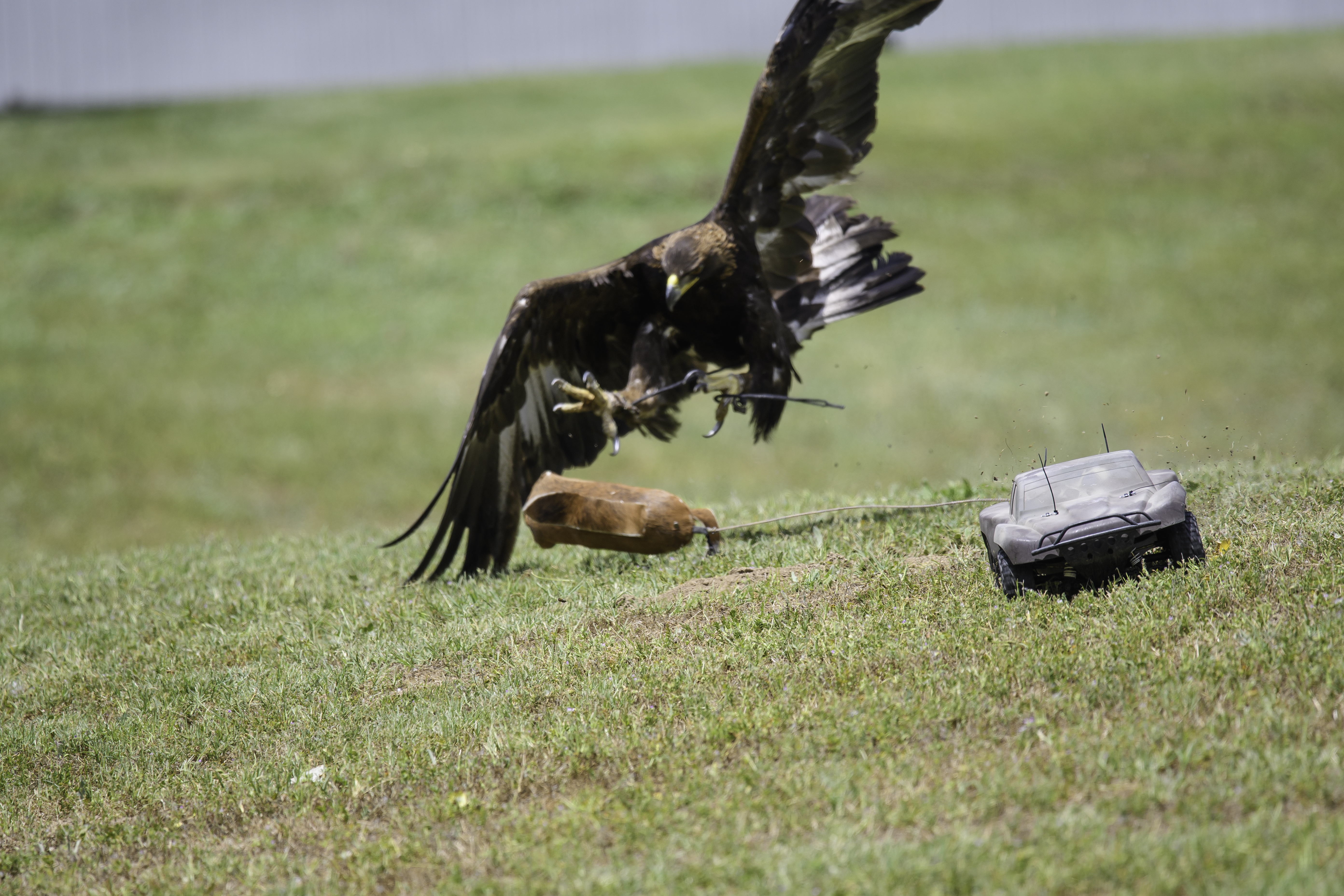 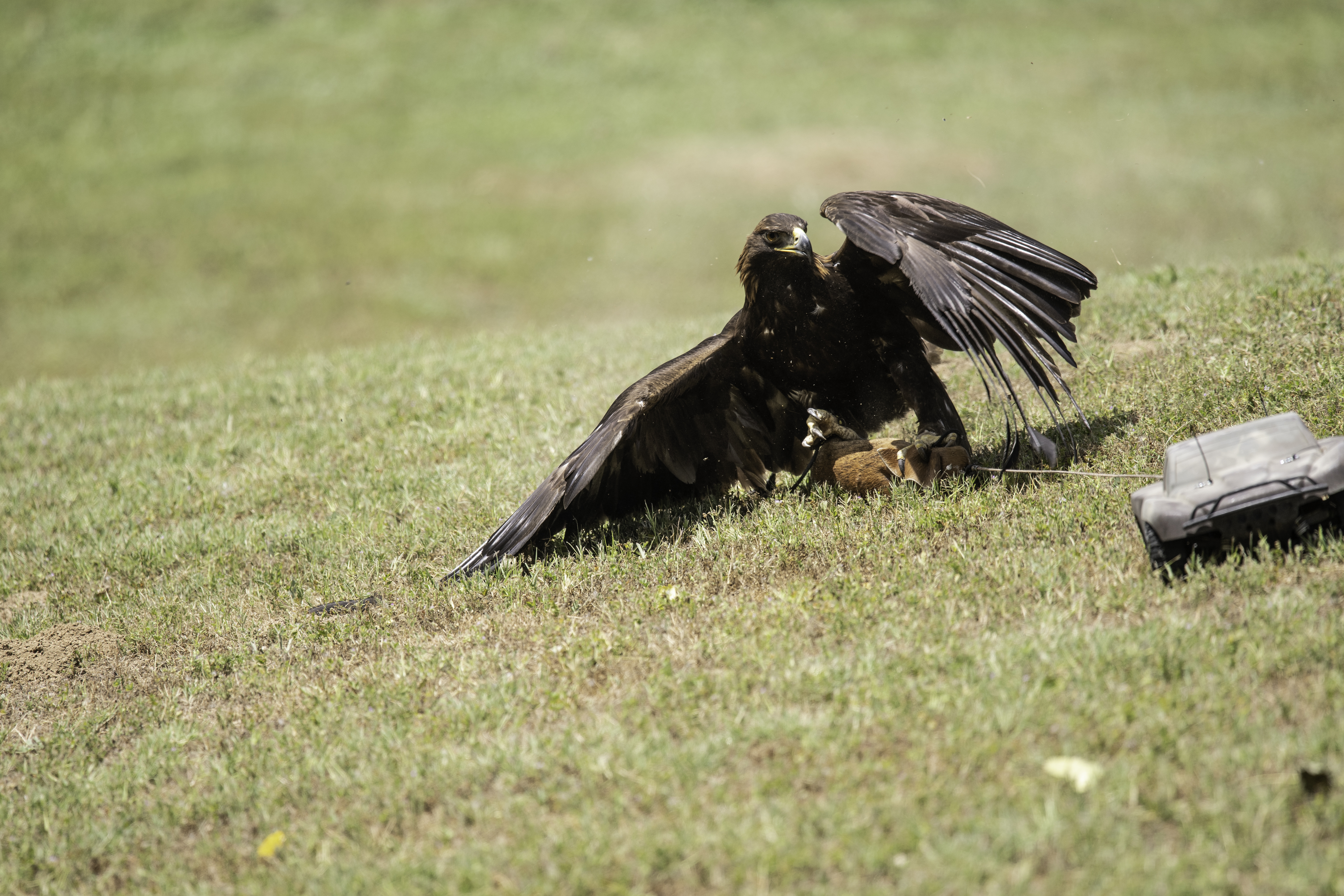 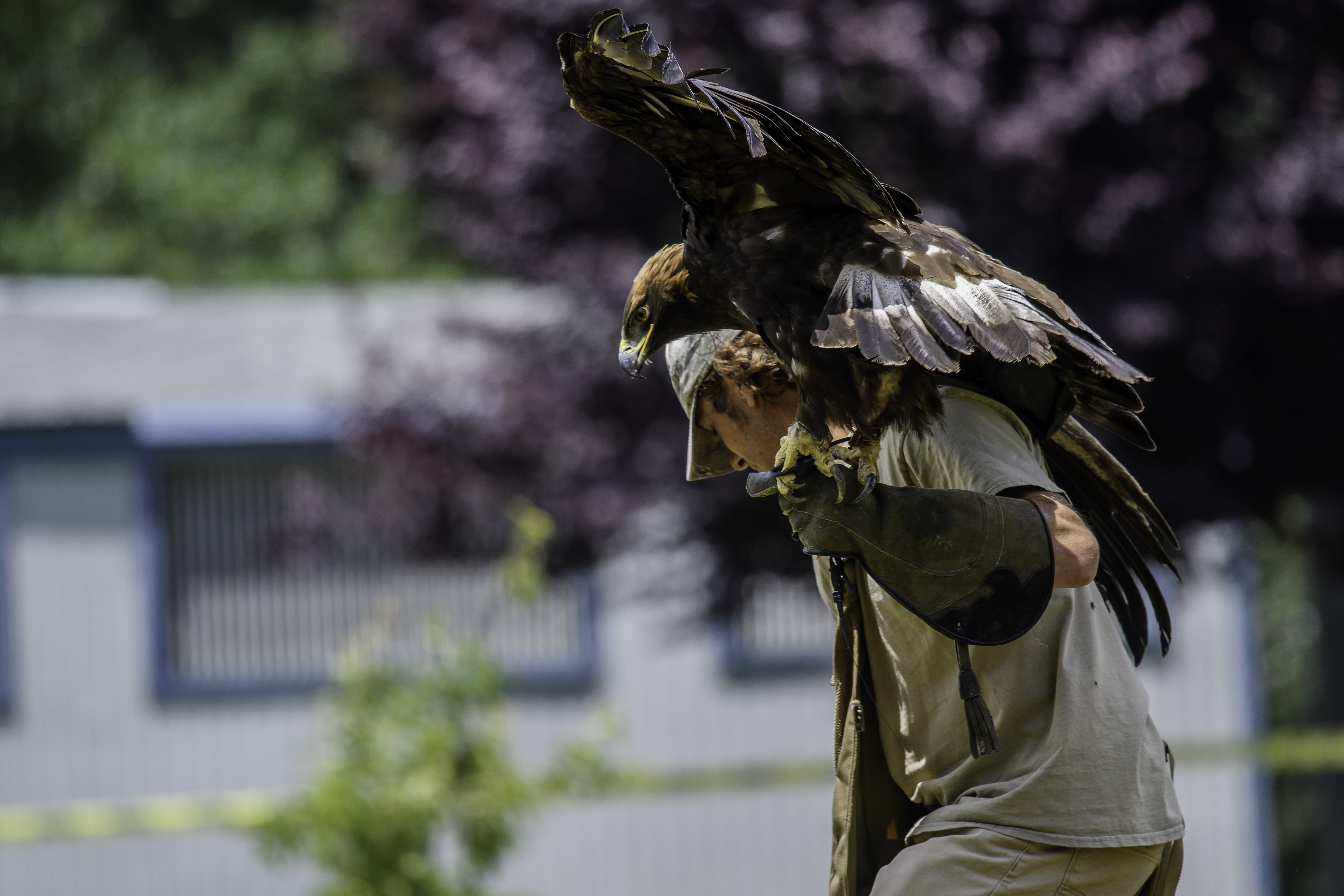