Founding Father Benjamin Franklin didn’t propose the Wild Turkey over the Bald Eagle as the official symbol on the Great Seal of the newly formed United States of America as is commonly thought.  He did, however, according to the Franklin Institute,  write in a letter to his daughter that he thought the eagle on the seal looked more like a turkey.  He stated that he saw the bald eagle as a “Bird of bad moral Character and one that does not get his Living honestly” whereas the turkey was “a much more respectable Bird, and withal a true original Native of America…He is besides, though a little vain & silly, a Bird of Courage.” Thus, a myth was born.

I can see how Franklin might have favored the wild turkey after photographing an agitated tom last week in Custer State Park in South Dakota.   But it has nothing to do with the moral character of the turkey over the eagle. It’s the tom’s ability to display our nation’s official red, white, and blue colors.  This tom, suspecting another male was in the area when his hen was nearby, was agitated and raced back and forth across the prairie grasses, searching for his competitor.

These six photographs show the color changes as the state of his agitation increased, then waned again.  First, he fanned his tail feathers while the colors on his wattle and head changed.   His wattle turned from brilliant red to a silvery white while the blue in his head intensified.

I took these shots from the vehicle using my Nikon D5 with the 300mm PF f/4 with 1.4 Teleconverter.

First, Mr. Tom is minding his own business trying to impress a hen nearby. 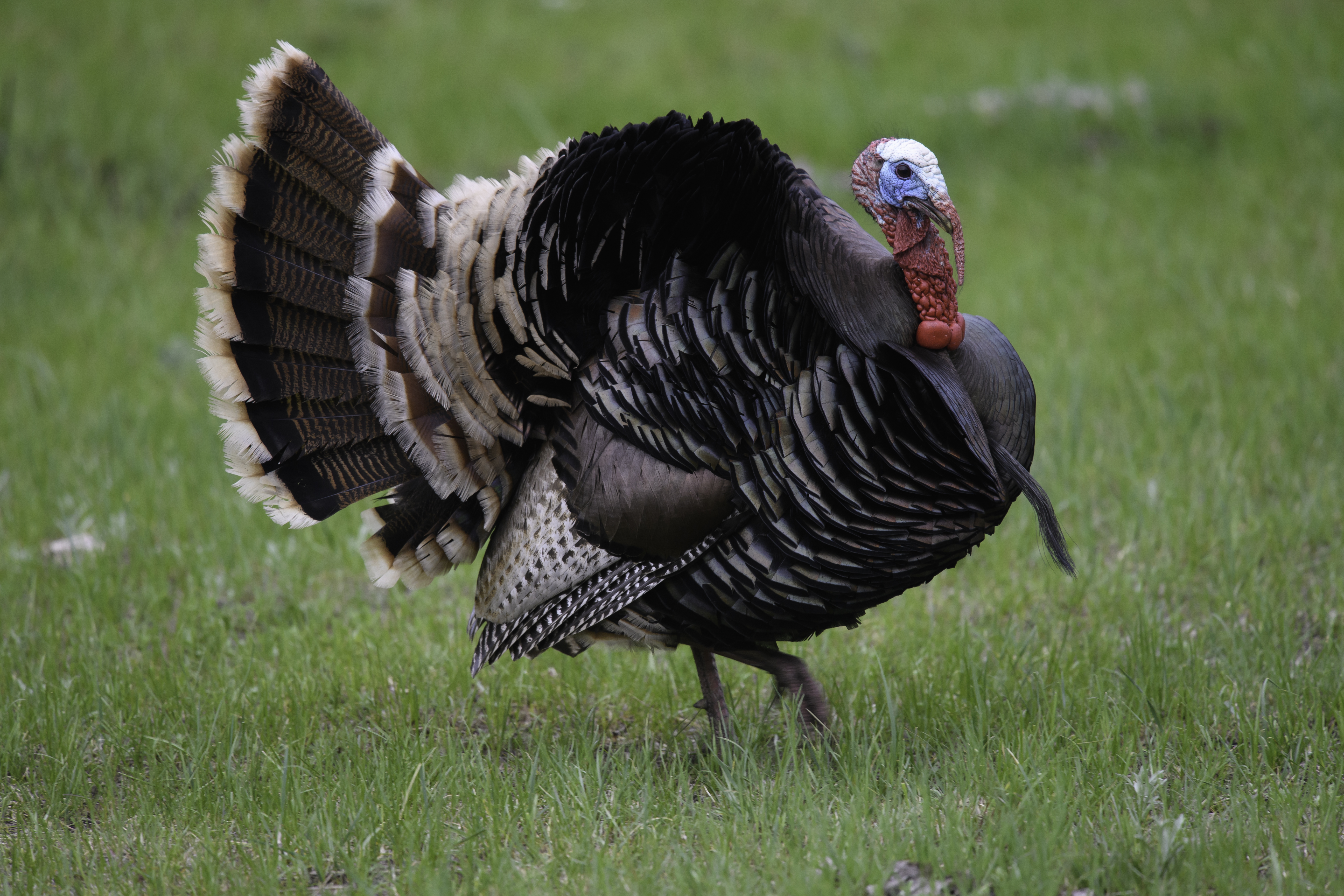 Mr. Tom hears the gobble of another turkey.   Competition.  His feathers rouse. 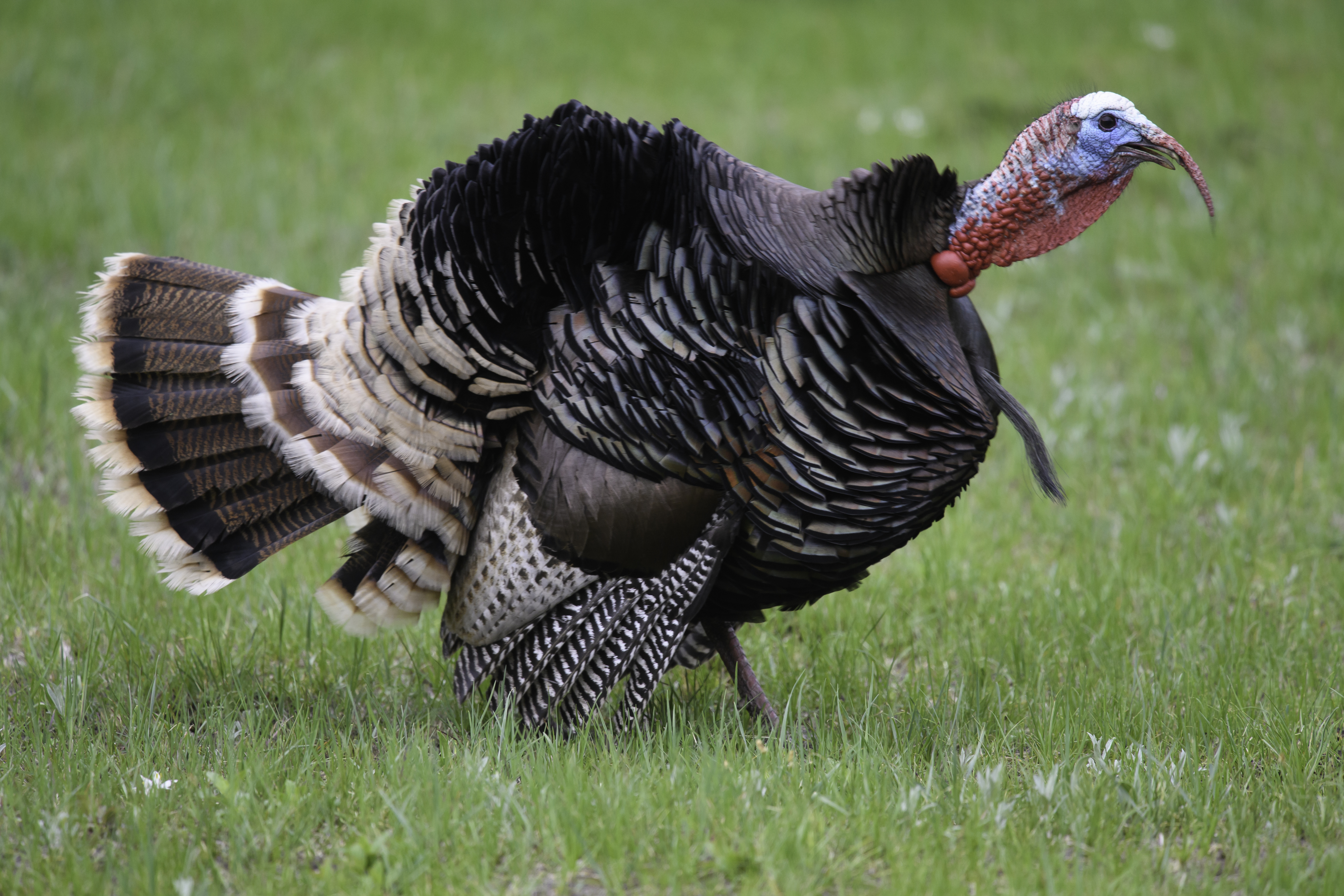 Within a few minutes, Mr. Tom has crossed the road in search of his nemesis, agitated and turning bluer in the face while his red wattle pales to a silvery white. 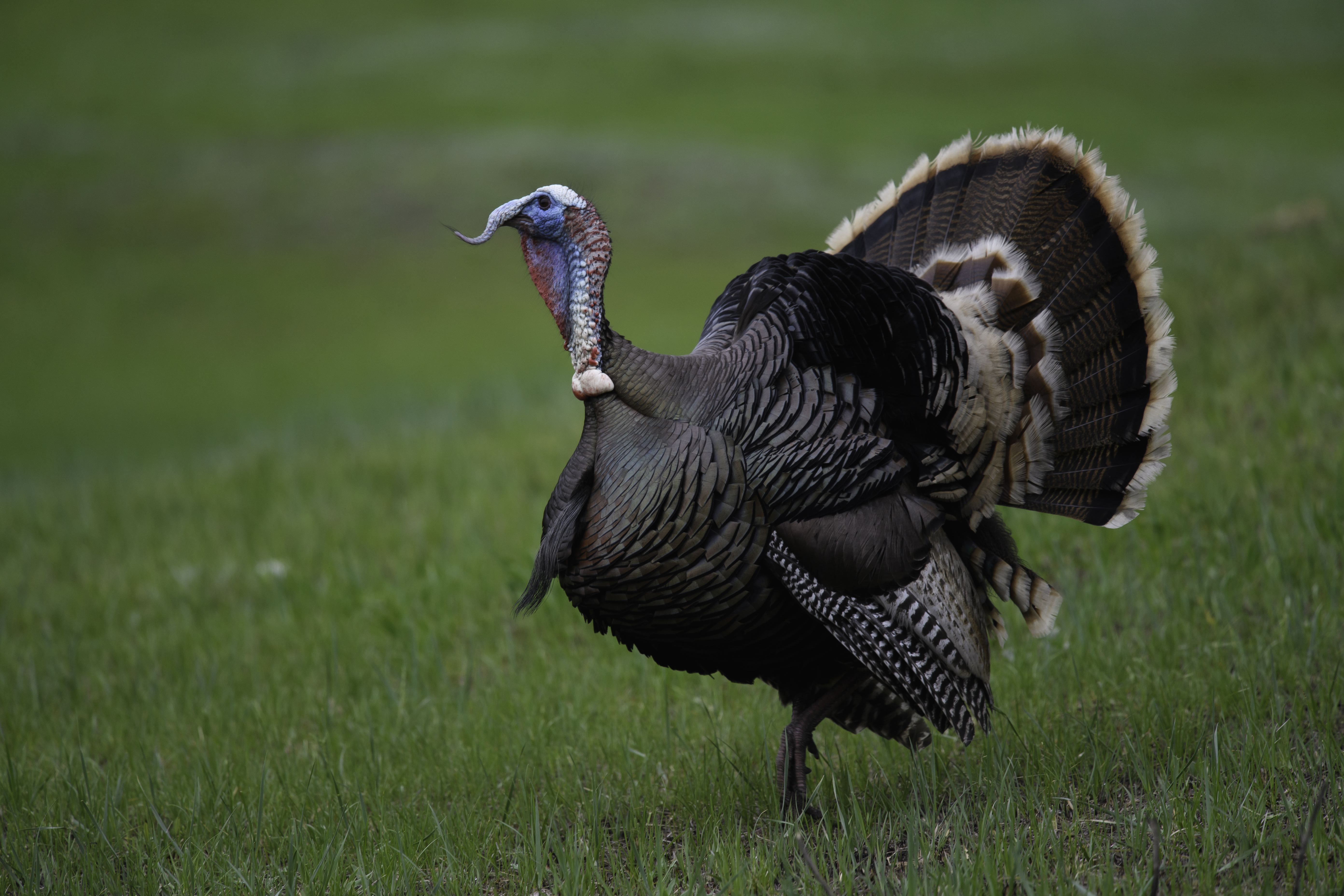 He heads off in search of the competition. 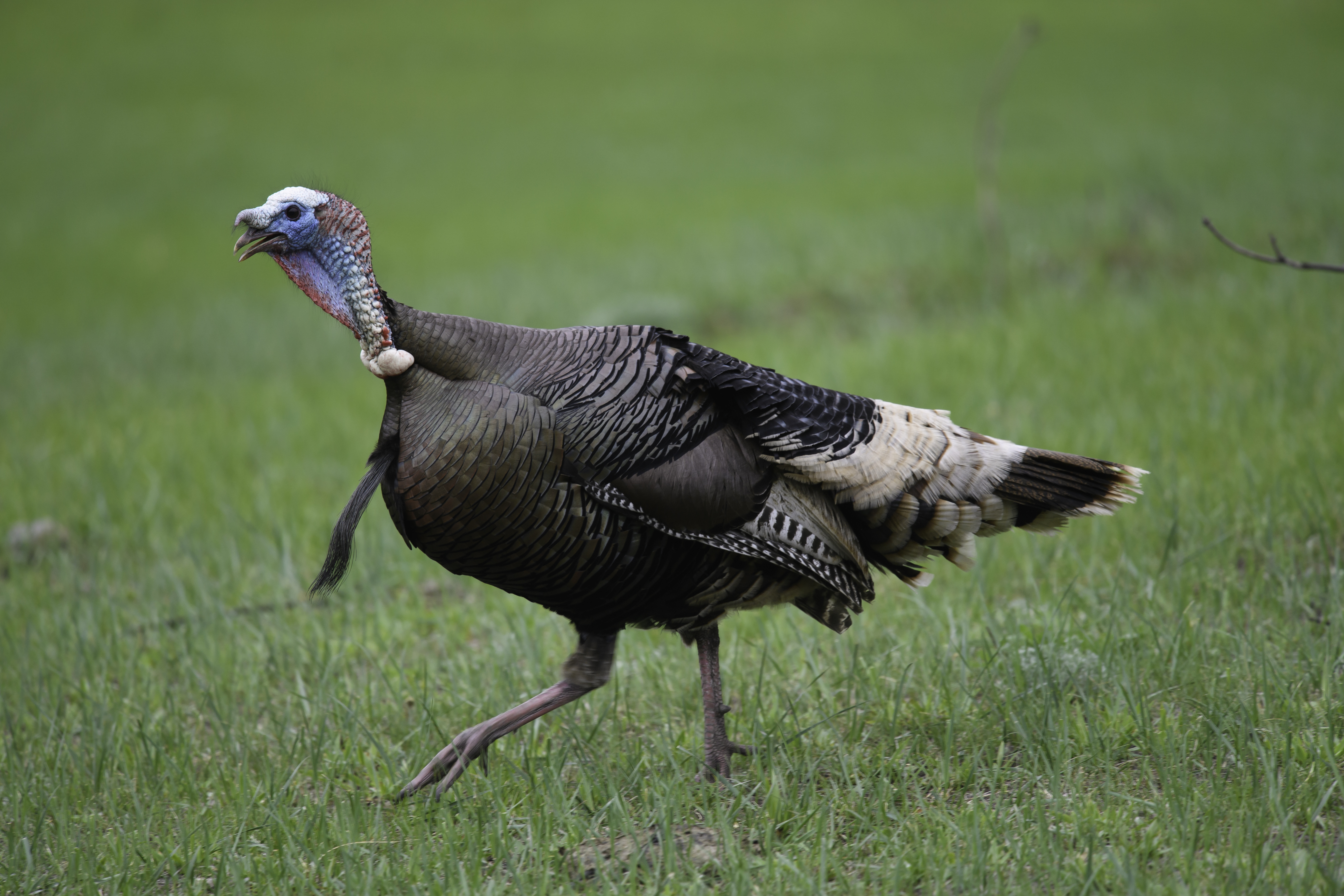 Back across the road, Mr. Tom climbs a small knoll then heads down the other side, still unable to find the the other male. 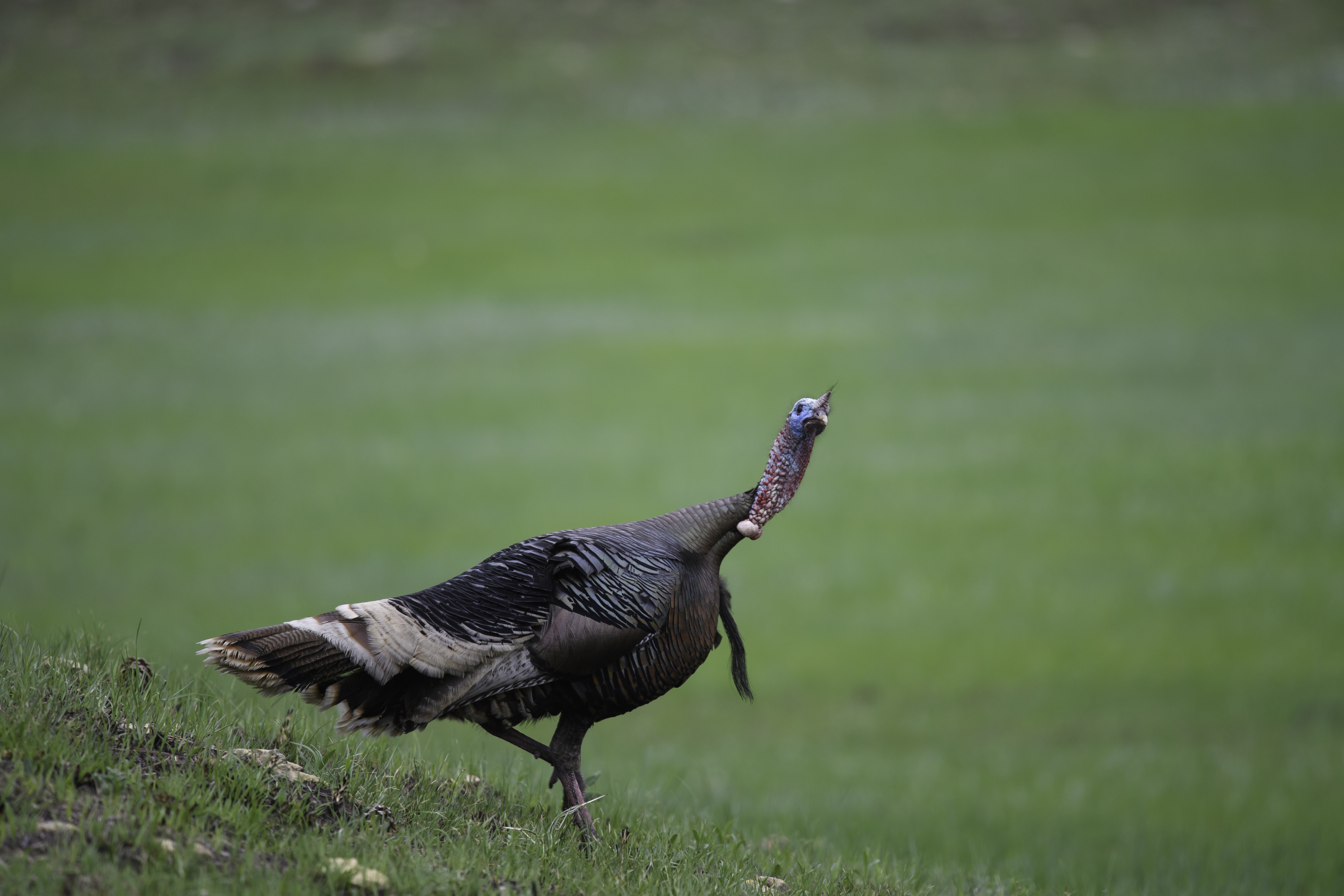 Finally convinced he has no competition, he calms down and the skin on his head and wattle return to their normal colors.  Having had the courage to seek his rival, he can once again display his feathers for the hen, and return to his vain and silly self. 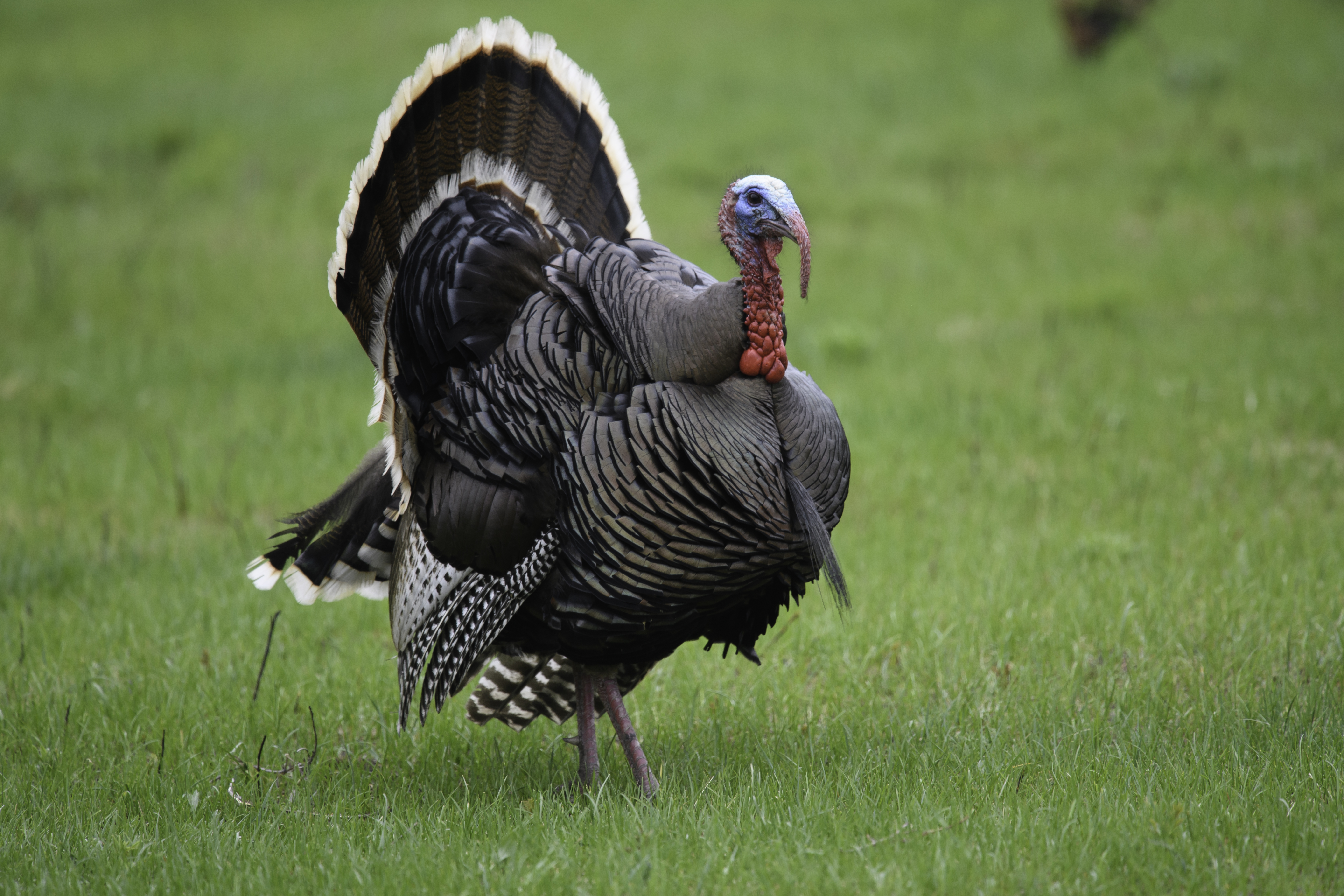