Photographing hummingbirds is one of the most challenging and frustrating photographic endeavors to undertake.  Hummers are so fast that if you can manage a click before they dart away, you’re ahead of the game.  The great thing about hummers, though, is that they hover.  And, sometimes they will hover long enough to give you a chance to capture some marvelous images.  When I was in Madera Canyon a few weeks ago, even with my magnificent Nikon D5 and D500 cameras that will record 10 to 14 shots per second, I got few in-focus shots.  I should point out that because I was using flash, I had the camera set to take a single frame, not a high speed burst of 12.  With this set-up, if I did manage to get a single shot in focus, additional shots were out of focus or the bird was half out of the frame, moving too quickly for me to capture the entire bird.  I recently discovered one exception to this.

A female Broad-billed Hummingbird spent a leisurely 15 seconds that allowed me to capture a sequence of 5 images.  She flies in and looks at me, hovers, moves to the feeder,  sips some nectar, moves back away from the feeder and looks at me again in the same position as when she arrived.  Then, she was gone.   While I was in Madera Canyon, I tried to keep the feeder in the lower right or left corner of the view finder so that I had a chance of capturing the bird in flight away from the feeder.  I didn’t move the camera to eliminate empty space on the left because I was hopeful that she would move far enough away from the feeder to allow me to capture her without the intrusion of the feeder. That didn’t happen in this sequence.  So, I cropped these photographs to a square crop.  I kept the feeder in the photograph because that’s part of the story.   Because she is a female hummingbird though, her colors are not the gorgeous jewel-like colors of her mate so the photographs aren’t as striking as if she were a male.  But, I’m glad she spent fifteen seconds with me. 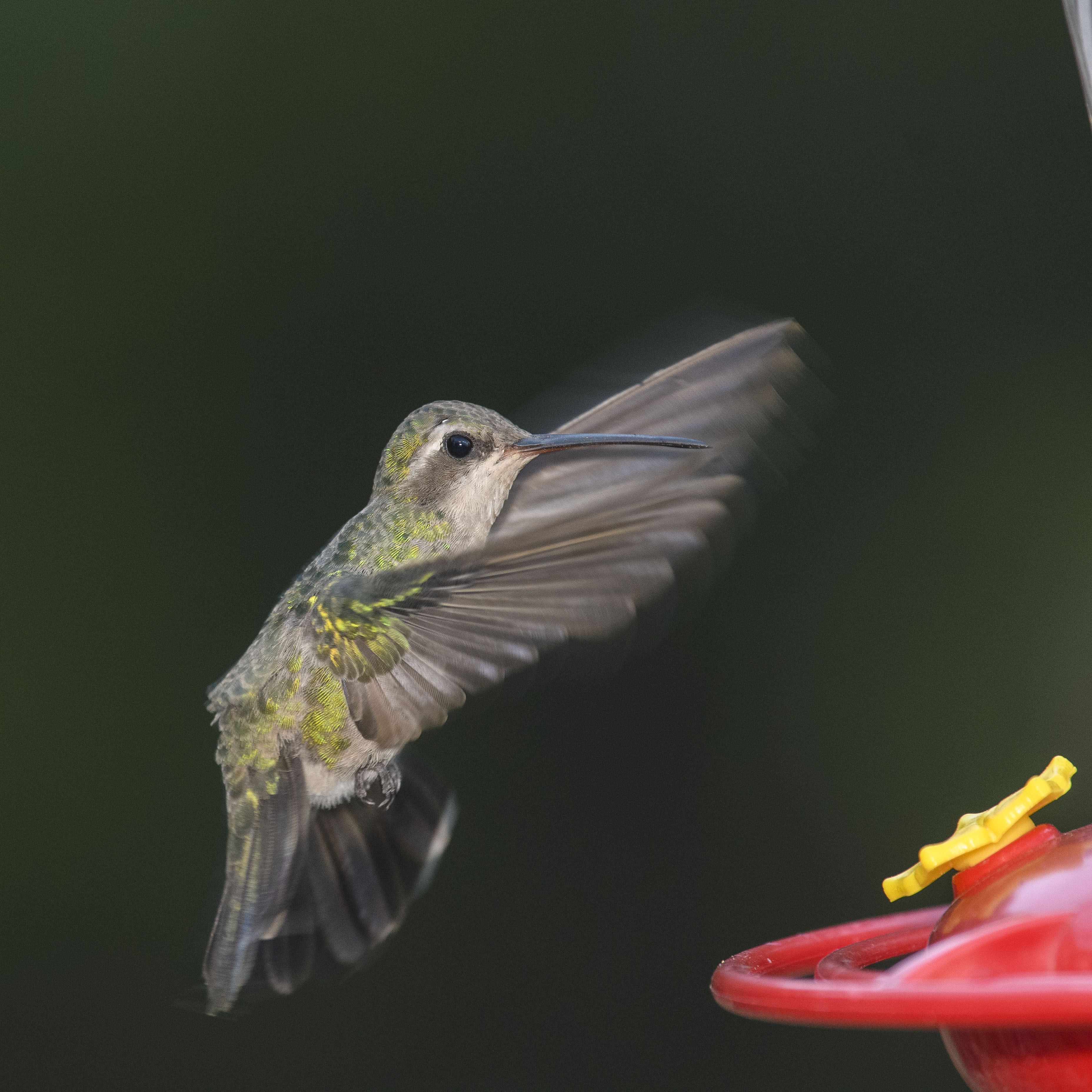 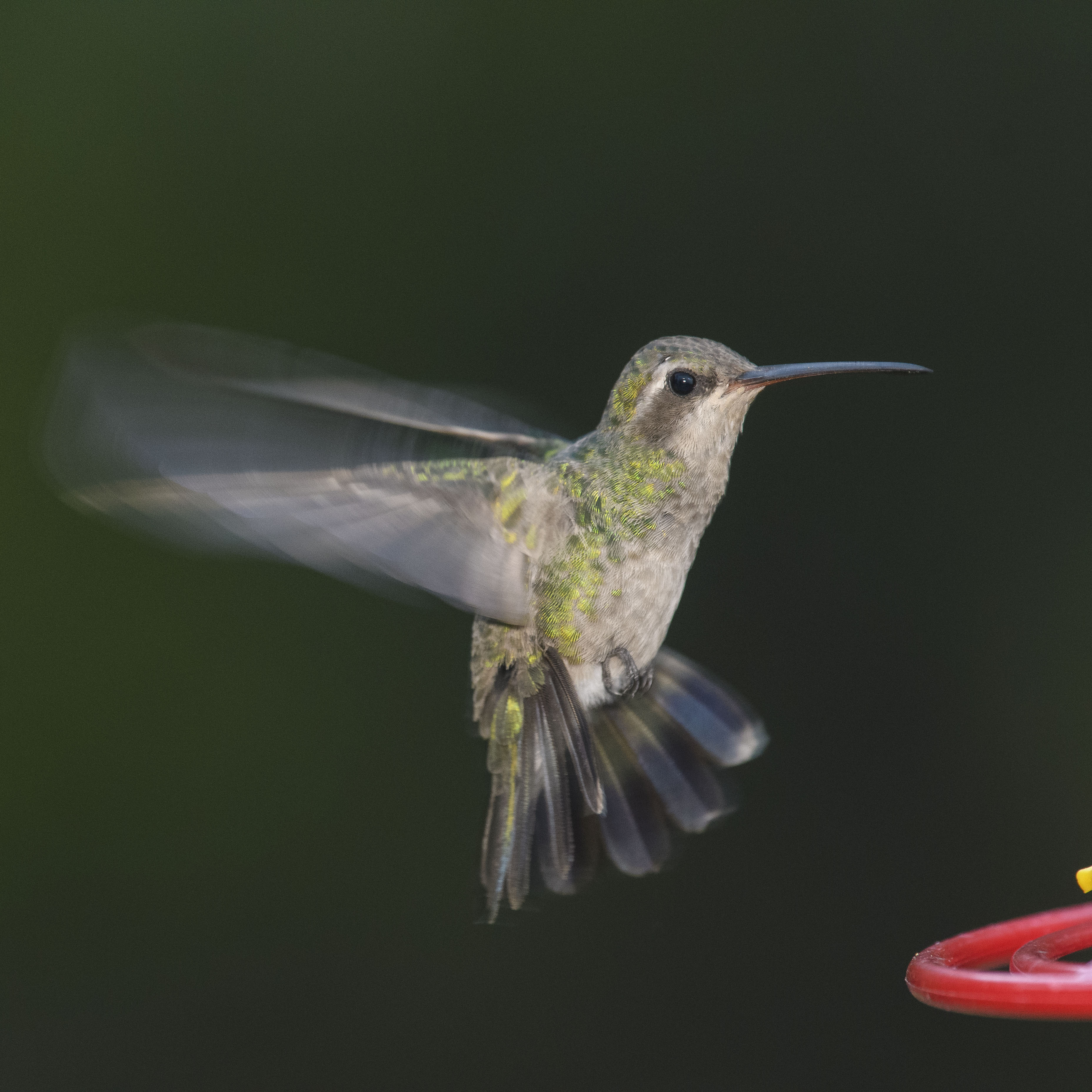 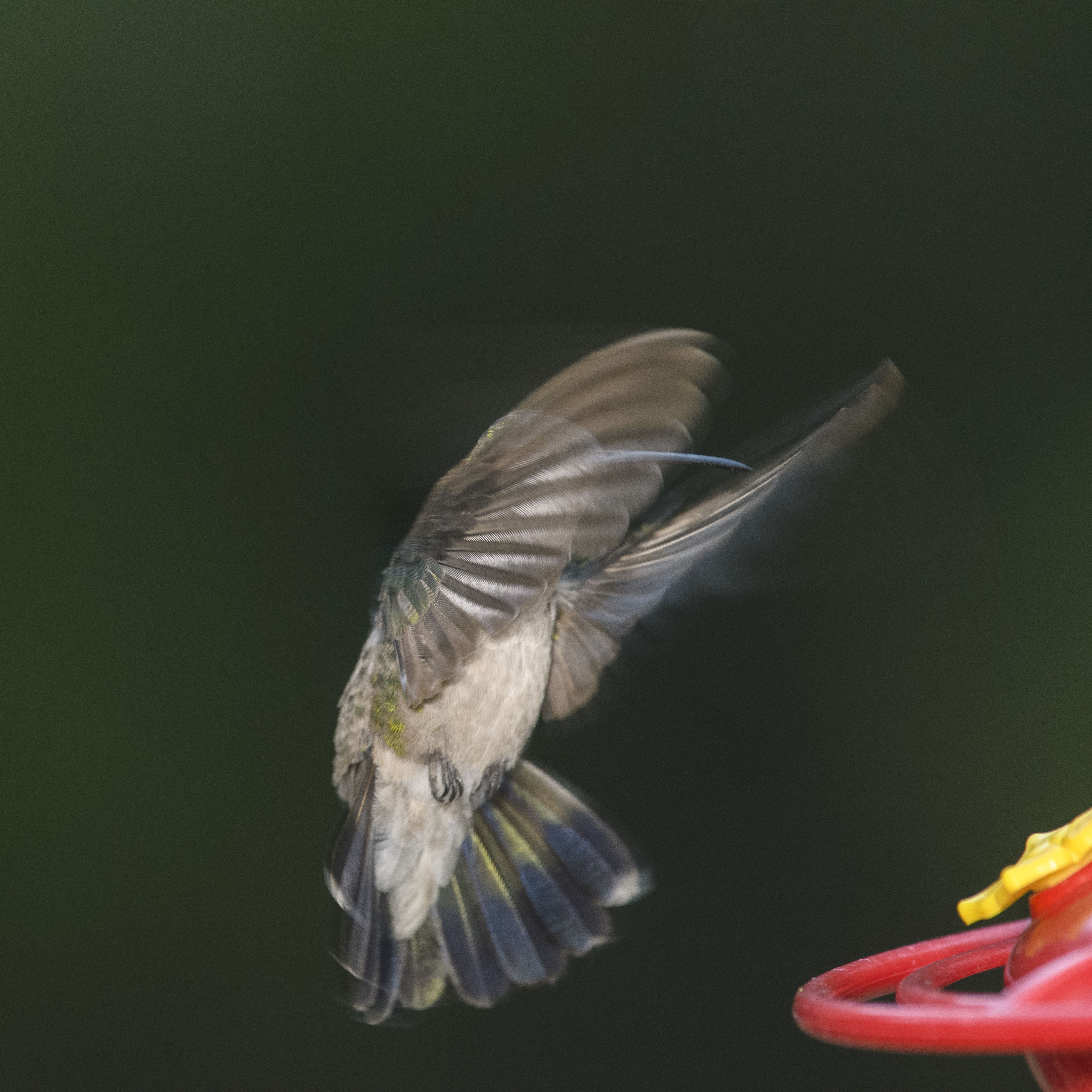 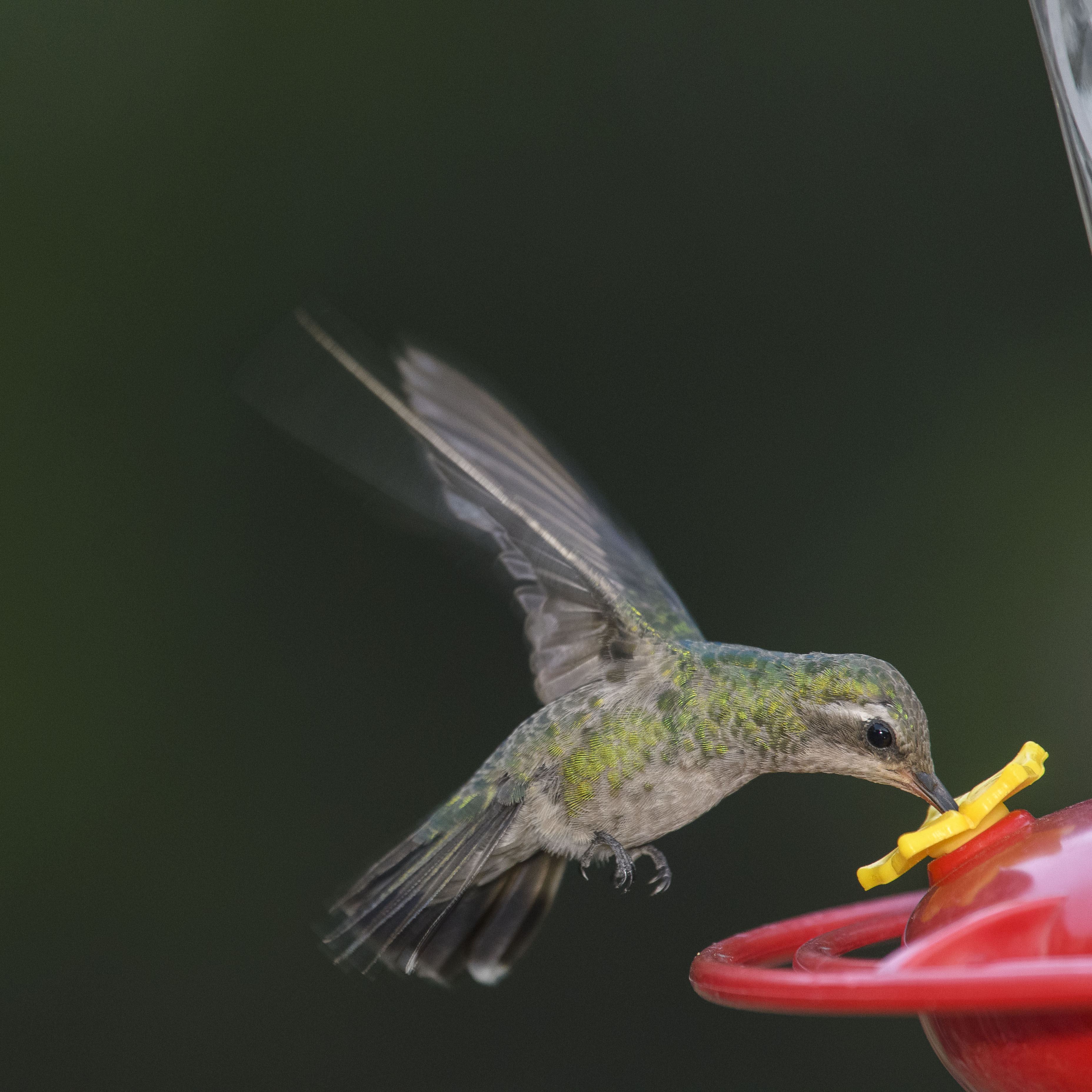 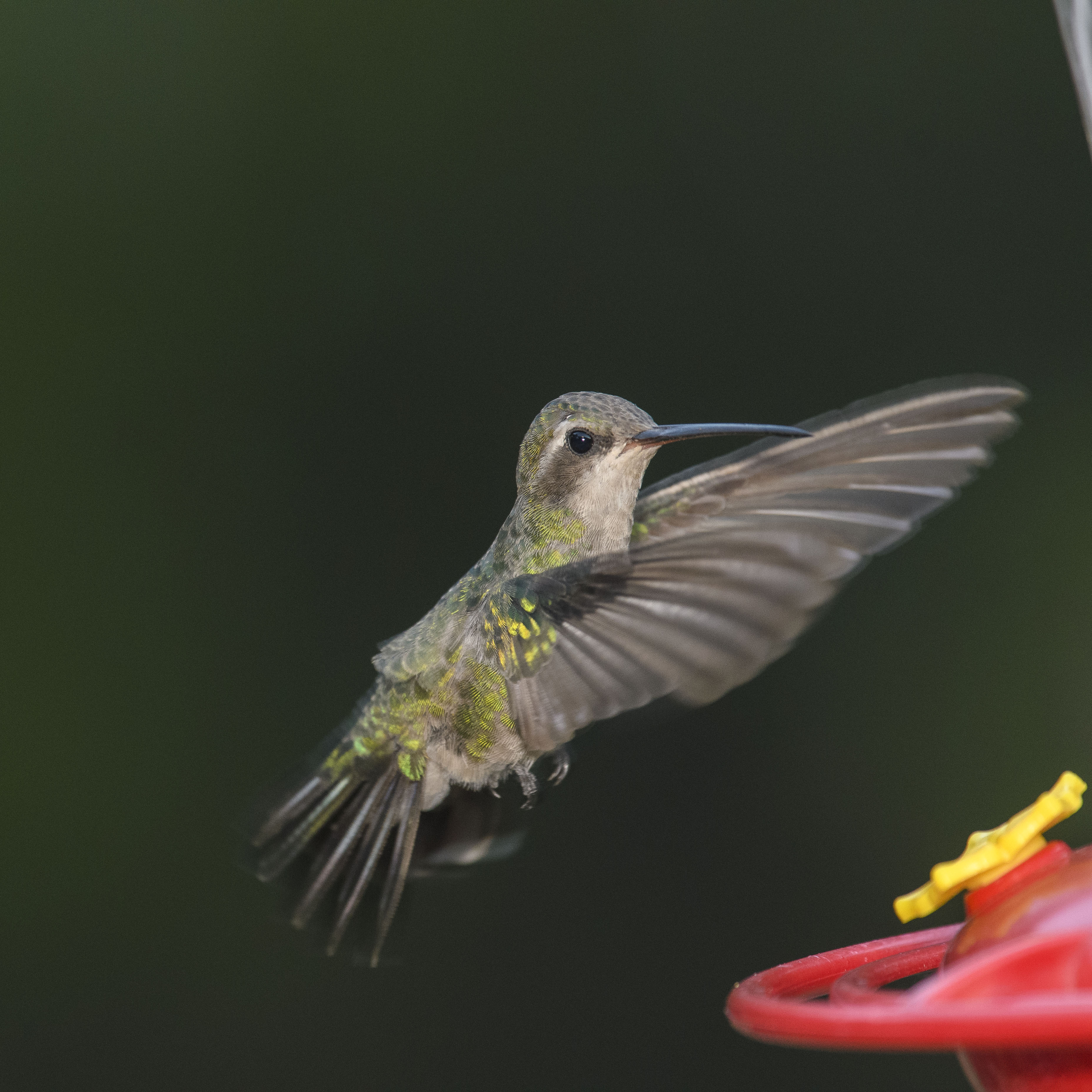