It took 108 years for the Chicago Cubs to win another World Series and it’s been almost 60 years since this vintage Chicago Cubs pennant has seen the light of day.  This mid-1950’s pennant, along with pennants from about 15 other teams, was in the last box removed from the attic in my parents’ house last year as we readied it for sale.

After the Cub’s won the 2016 World Series,  I remembered one of the pennants we found was a Cub’s pennant, so I decided to photograph it for my blog.  I wanted it to fill the frame as much as possible while still featuring the entire pennant, but it is long and narrow so there would be lots of empty space.  Then I remembered that I also have my Dad’s Scrapbook that is filled with baseball memorabilia and newspaper clippings, almost all of it related to the years my Dad played baseball, first in high school, then on a baseball scholarship at the University of San Francisco, and finally as a semi pro player in the Pacific Coast League in the San Francisco Bay Area in the early 1930’s.  Other than that they are about baseball, the clippings and photos have absolutely nothing to do with the Chicago Cubs but I thought since they’re baseball related, they might work as background for the pennant and, at the same time, be a tribute to my Dad.

Among the more fascinating items are a couple of letters from a baseball scout for, I think, the Boston Red Sox, who, 81 years ago, offered my Dad a contract to start in the minor leagues with a beginning pay of $75 per month on a D team.  The scout’s big concern was that Dad wore glasses and the scout told Dad that while he thought he had potential, he wasn’t convinced the guys in the head office would accept him without perfect eyesight.  As it happened,  my Dad turned down the offer and chose another career path.   But, the memories of his brief baseball career remained an important part of his identity along with the Scrapbook.  Whenever my Dad  attended baseball games in the 1950’s, he would pick up pennants for those teams and give them to my brothers to hang on the wall of their room.   The Cub’s pennant, like the others, is wool felt. Almost all of the other pennants are moth eaten and the tips of the pennants are ragged from being tacked to the wall in my brothers’ bedroom.  I don’t know how this Cub’s pennant remained free of damage.

All of the photos in the image are of my Dad in uniform in the 30’s, including a newspaper feature on him.  The hand written letter next to that clipping is the first letter from the baseball scout telling Dad he had potential for pro ball.  The program and the clipping in front of the pennant are from the 1934 game between the losing Southern Pacific Team my Dad played on and the winning San Quentin All Star team.  I recall a few of my Dad’s tales from that game, including  one inmate volunteering to retrieve a home run ball hit out of the prison walls into the San Francisco Bay.

I added a Nik Color Efex filter, Bleached Portrait, to emphasize the age of the photos and clippings and to tone down the bright red of the pennant. 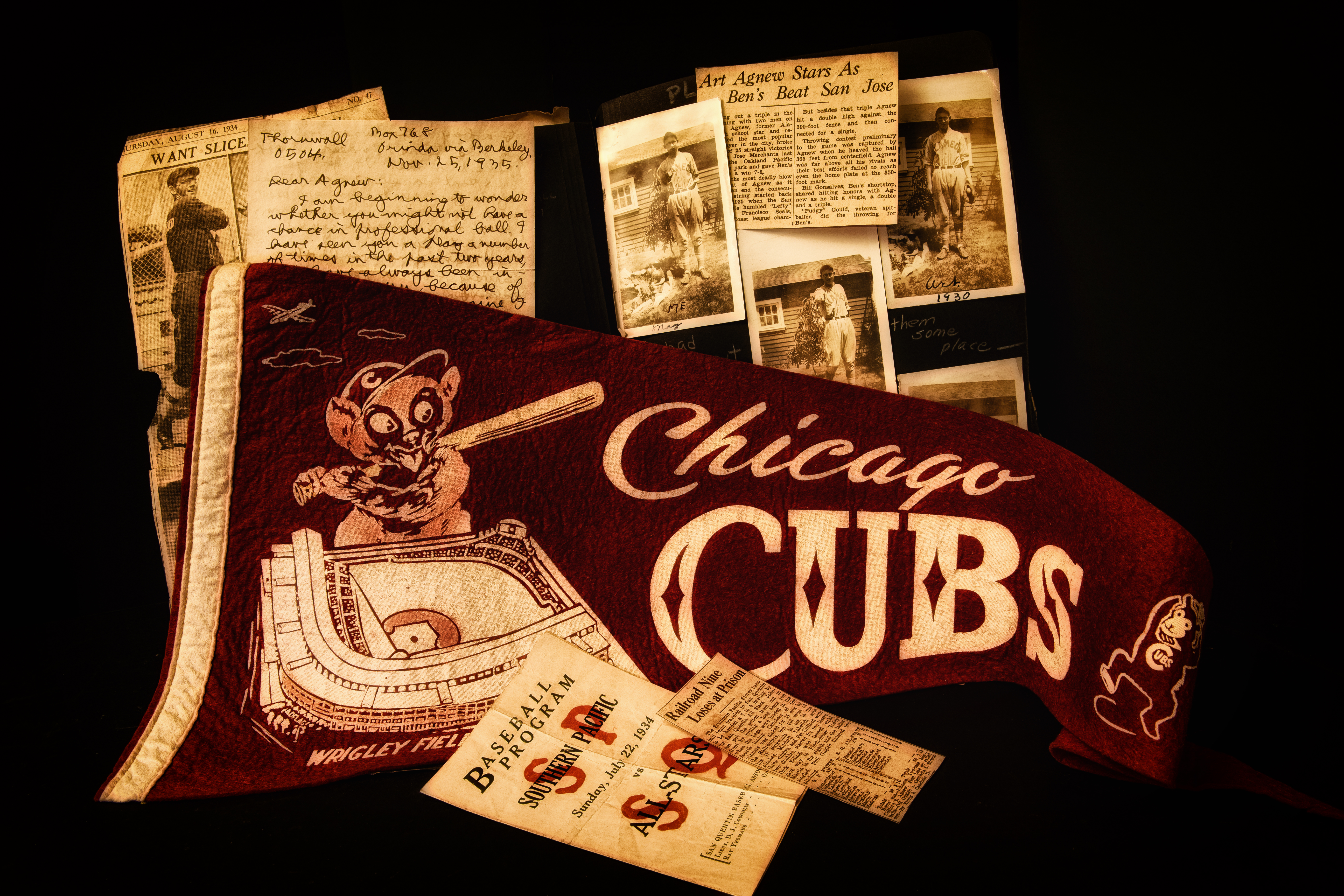