To make a long story short, I now have my very own panning plate, thanks to a couple of strings pulled by Mr. Peterson, so my new toy arrived at the hotel on Thursday morning.  Friday was my first chance to try it out after my friend Richard affixed it securely to a Texas A&M branded frisbee.  I lay on the sand, stretched out on my belly, happily getting sandy and drenched while I watched sanderlings and ruddy turnstones and gulls and dunlins through my bird’s eye level view finder.   This technique creates such a unique perspective and delineates such a  narrow focal plane that photographs taken with this technique are vastly different from photos taken from a tripod.  They may look similar in some ways, but they are not, nor are they nearly as dramatic.  The subject is completely isolated from the surroundings.   After my first day’s experience, I quickly gained confidence that I wouldn’t damage my camera gear and I was so mesmerized with the unique point of view that I hardly noticed the sand or water or the awkward body position.  Someone always shouted “wave!” when there was a possibility of inundation so I would just brace myself and lift up the camera.

After about 45 minutes of trying out my own panning plate, I heard Moose shouting my name.  With the surf roaring loudly, it was hard to hear what he was shouting but I knew whatever it was, I was doing something wrong.  It turns out that in my exuberance to try out the new panning plate and to familiarize myself with operating the camera gear in such an awkward and precarious position, I completely forgot about the light so most of my ground level photos to that point were marginal at best.  Moose insisted I move across the beach to work next to him so that he could guide me better and help me improve my performance by observing what he was doing and how he was doing it. What a difference that made.  After Friday morning’s experience, I was more excited than ever to discover the wonders of this new perspective for wildlife photography.

But, after only twenty minutes or so, the winds picked up alarmingly and  fine sand began to blow across the beach.  That fine grit would quickly damage our lenses and cameras so we had no option but to quit.  Moose stopped the session and we packed up and drove to breakfast.  But Moose assured me I would work next to him again Saturday morning so he could continue helping me improve and I was looking forward to that opportunity.   Because I enjoyed using the technique so much and embraced it so quickly after I was so adamant that I would never try it, I was disappointed to quit early Friday.  And, when strong winds continued into Saturday, our beach panning ended altogether.   But, as Moose pointed out the obvious to me, California does have its own beaches, so……

This is one of several successful panning photographs I took with Moose’s direction.  It’s a Dunlin in non-breeding plumage.  The focal plane is not level.  I discovered that keeping a level plane is one of the many difficult aspects of this technique.  But, despite the tilt, I think the photograph works and, when I shared it with Moose, he agreed. 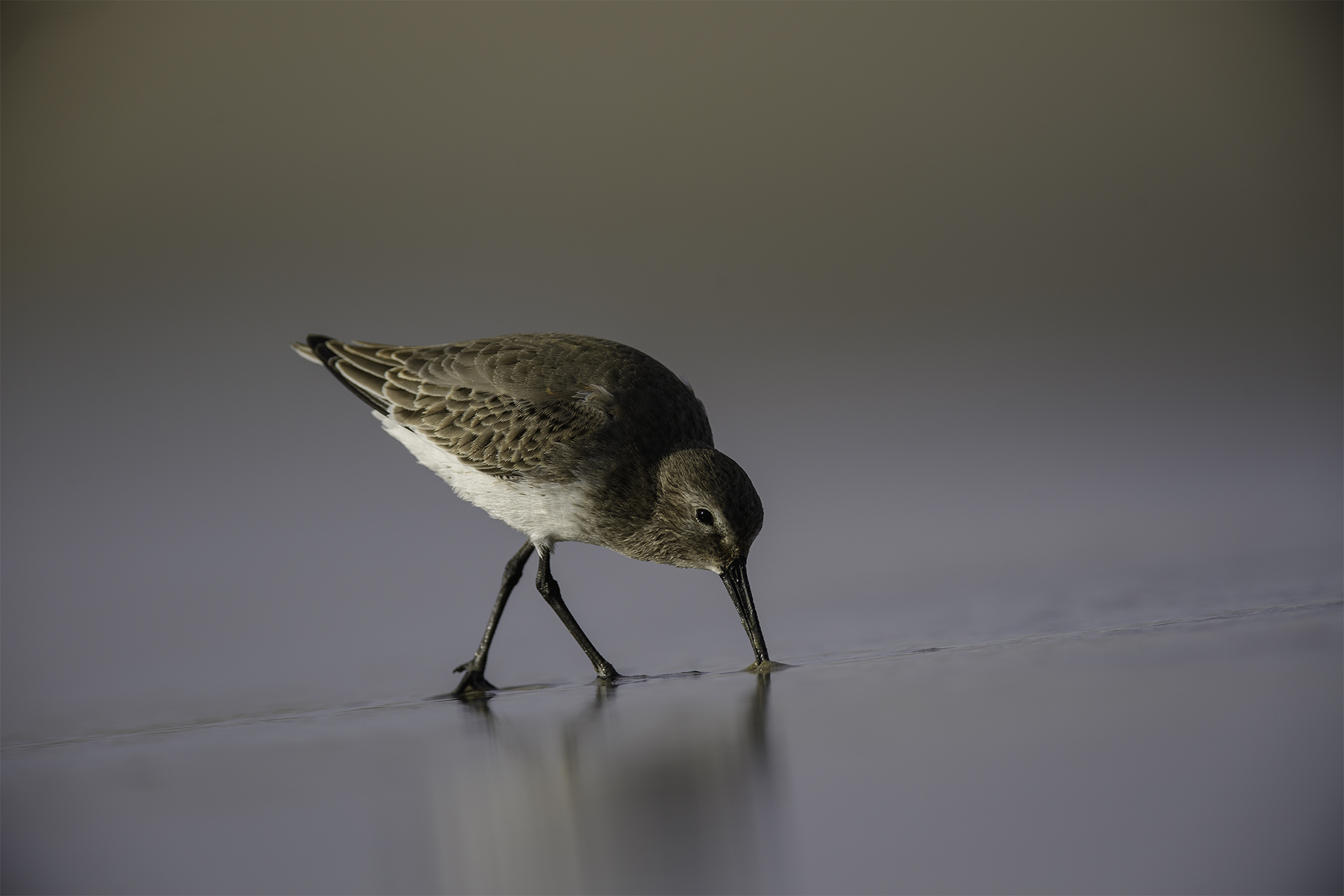