The most fascinating bird we encountered on our mid winter (August, 2016) journey in the Australian rainforest was the Satin Bowerbird.  I first discovered this most intriguing creature, a bird about the size of a Western Scrub Jay, many years ago on a 1998 PBS documentary by Sir David Attenborough called The Life of Birds.  Except for its eyes which at times appear lavender and at times, sky blue, the Satin Bowerbird isn’t colorful (the male has shiny black feathers, the female’s are olive green) but what it lacks in color, it makes up for in its mating behavior.   The male tries to attract female Bowerbirds by building a structure on the rainforest floor, a sort of bower, made of thin twigs which he obsessively places one by one to create an arched framework with an avenue through it.  He decorates the area around the bower with things he finds beautiful and that are blue.  I was amazed to discover that Sir David Attenborough’s documentary about the Satin Bowerbird that caught my attention so long ago, was filmed on location at a bower at O’Reilly’s in Lamington National Park, Queensland, Australia, where we were.

We visited the bower every day  we were at O’Reilly’s.  The bird was persistent in maintaining the bower, moving twig after twig in an endless pursuit to satisfy some inner instinct that said the bower wasn’t perfect enough.  He rebuilt and repaired the bower when the carefully structured display was disrupted by the Australian Brush Turkeys rooting through the forest floor.   One day we witnessed a standoff between the Satin Bowerbird and a Pademelon, a small Wallaby-like marsupial that was ubiquitous in the rainforest.  The Bowerbird prevailed and the Pademelon moved on.   Daily maintenance activities took place for long periods every few hours.   We photographed the Satin Bowerbirds from the rainforest path or a few yards away among the trees.  We used 600 to 800 mm lenses on tripods and gimbal heads with speed lights to help penetrate the darkness in the dense rainforest canopy.   To avoid a “flashy” look, we reduced the flash output by minus 3 stops.  We were close enough that teleconverters were not necessary.

While at one time, natural items like blue flowers and blue feathers decorated Bowerbirds’ bowers, the  current availability of blue plastic objects, disposable things like bottle caps, plastic forks, and straws, are now the decor of choice for Satin Bowerbirds.  Under normal circumstances, blue plastic objects in the rainforest would be considered litter, but in this case, visitors are encouraged to make blue offerings for the Satin Bowerbirds to use in their bowers.   I contributed a blue bottle cap.   Interestingly, the Bowerbird has to place the object himself.  If an object that he didn’t put there appears in or near the bower , he promptly removes it from the area.  But he will forage to find the precious blue objects and place them strategically around the bower in the hopes of attracting a mate.

He continually surveys his creation and adjusts both the bower itself and the placement of blue attractants constantly.  This is one OCD affected bird!  He does occasionally find something else to decorate with that isn’t blue.  One day he brought a couple of yellow leaves and another day he carried around a small white flower but the area around the bower is sprinkled with blue, mostly plastic objects.  One day, we heard a female Bowerbird answering the male’s calls.  He became quite agitated and started to scurry around but it was a false alarm and the potential mate quickly moved on so the male redirected his efforts at continuing to redecorate the bower for another potential mate.

I’m including more photographs than I usually include in a blog because I wanted to tell the Satin Bowerbird’s story and one or two just didn’t seem to tell enough.

Photo Below:  The male Satin Bowerbird surveys the bower to see what adjustments he needs to make to attract females to it. 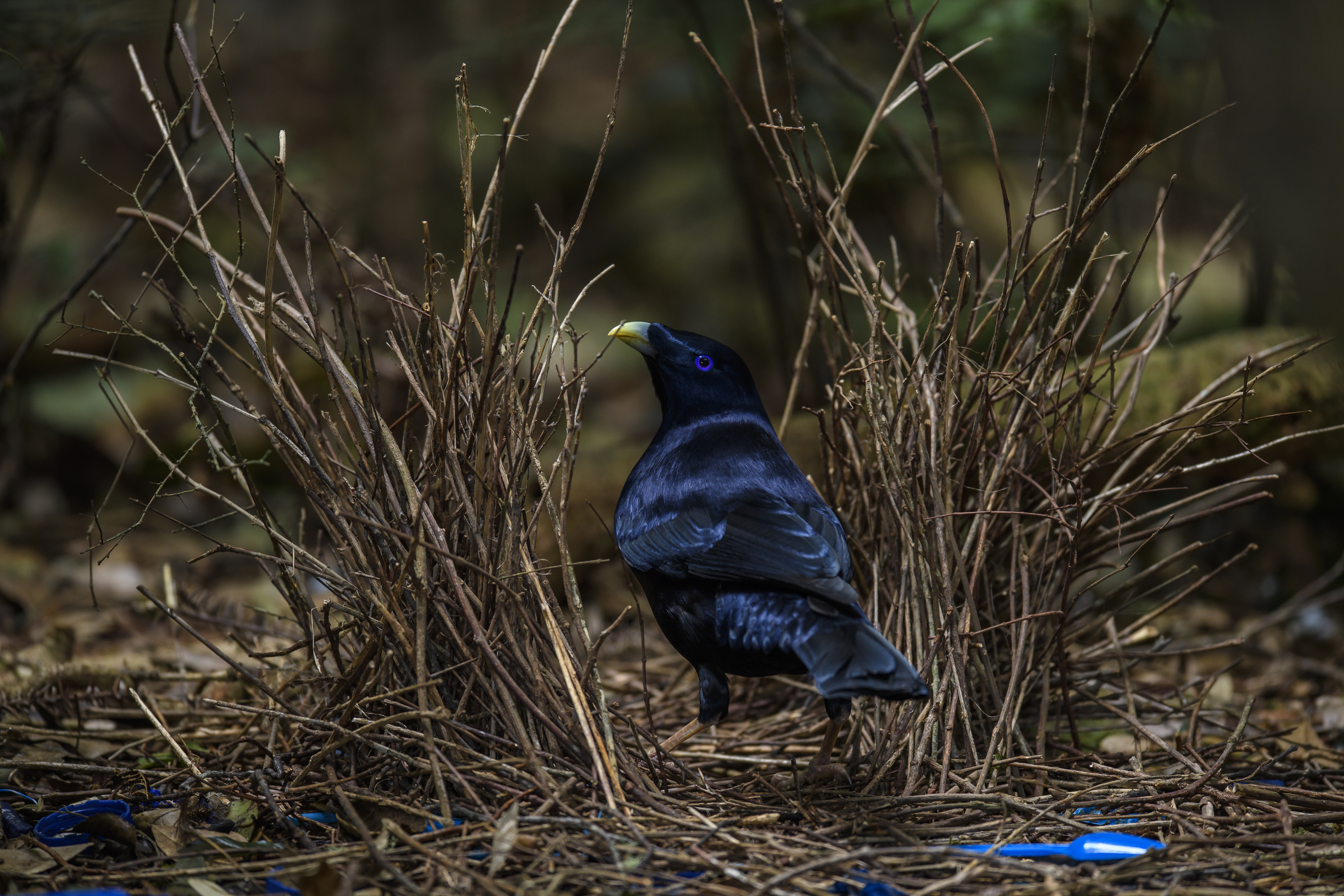 Photo Below: He selects a twig, then carefully places it upright in the bower. 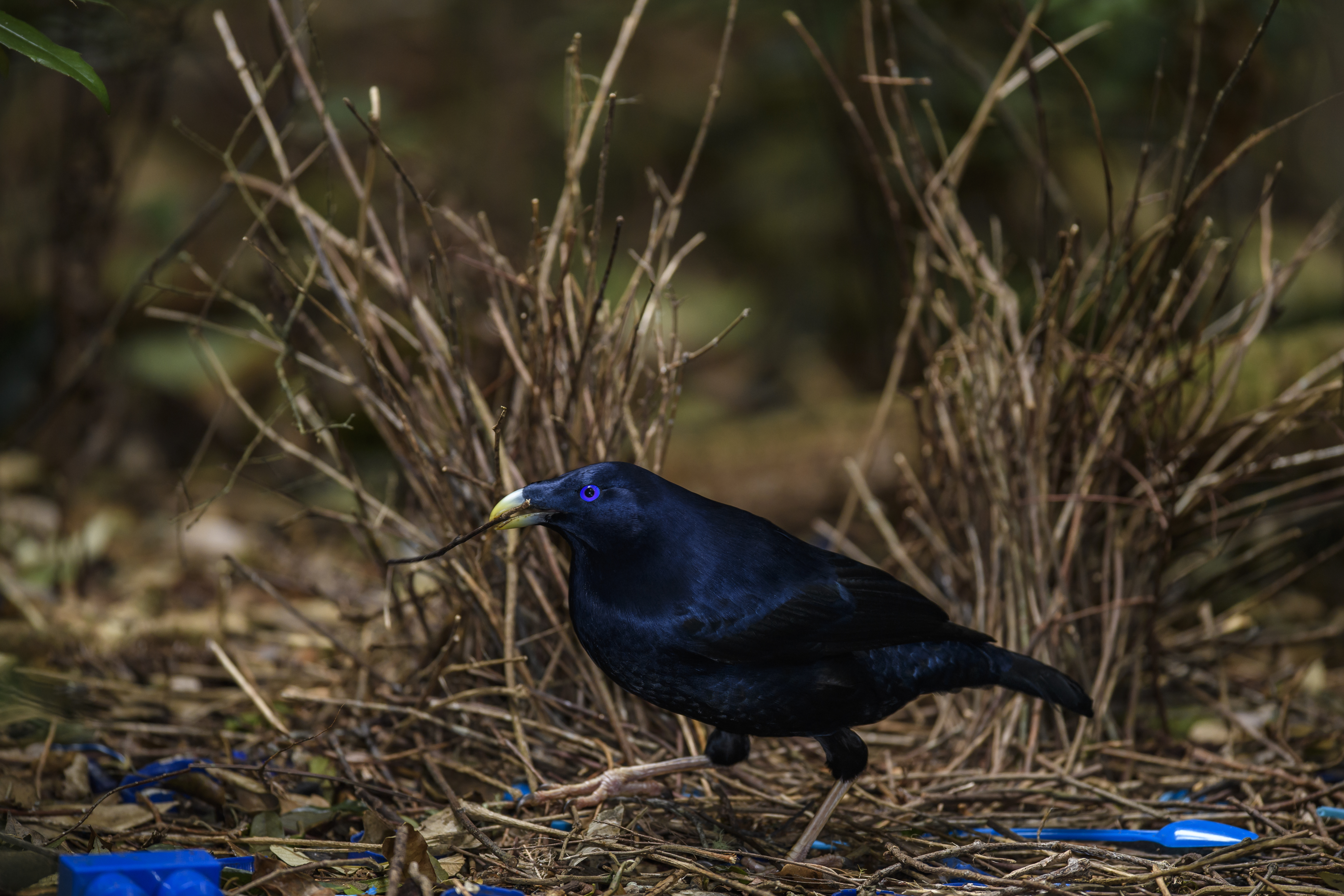 Photo Below:  A rare white object, a flower, gets consideration for placement in the bower. 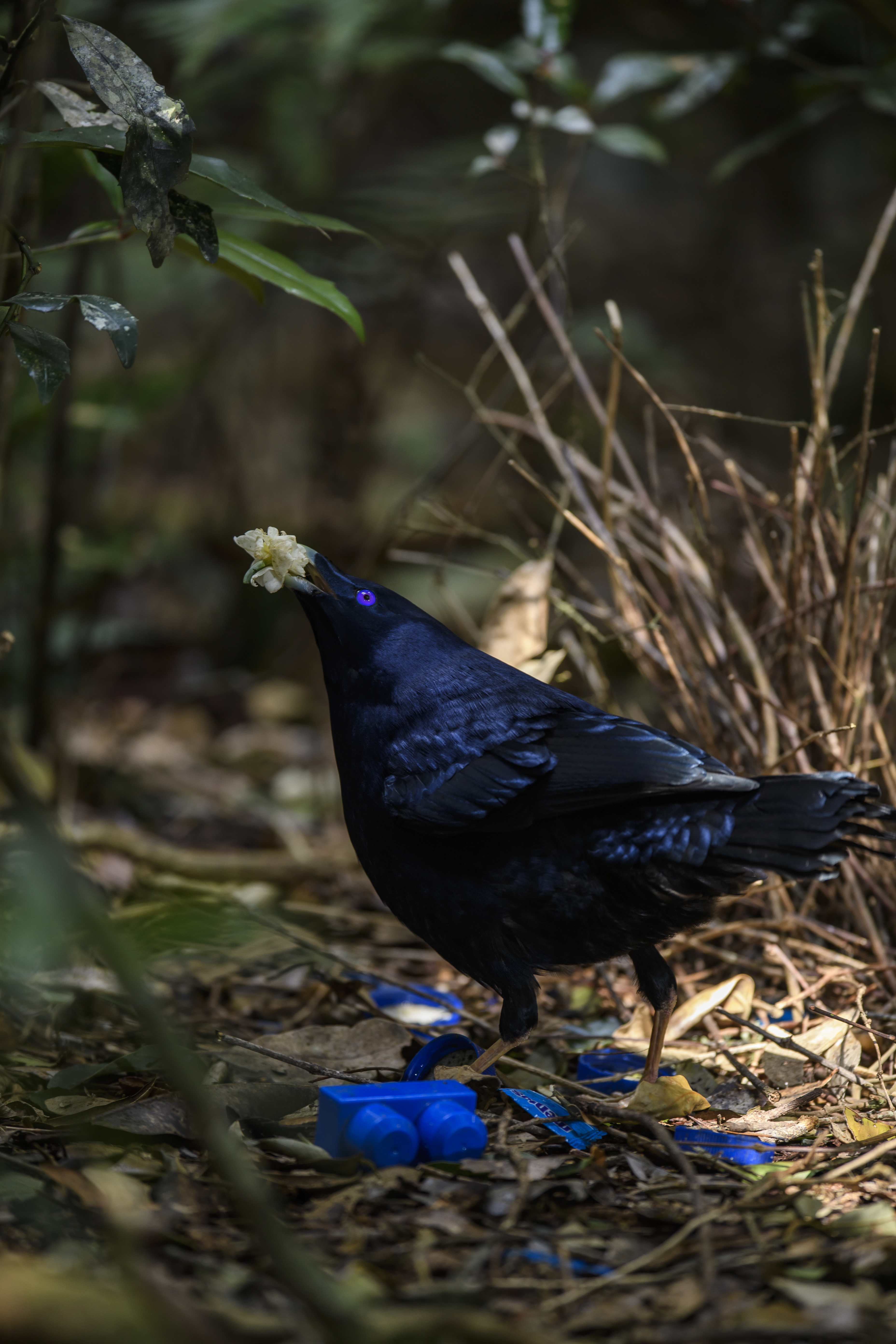 Photo Below: Looking through the bower at the array of blue plastic that decorates the surrounding area. 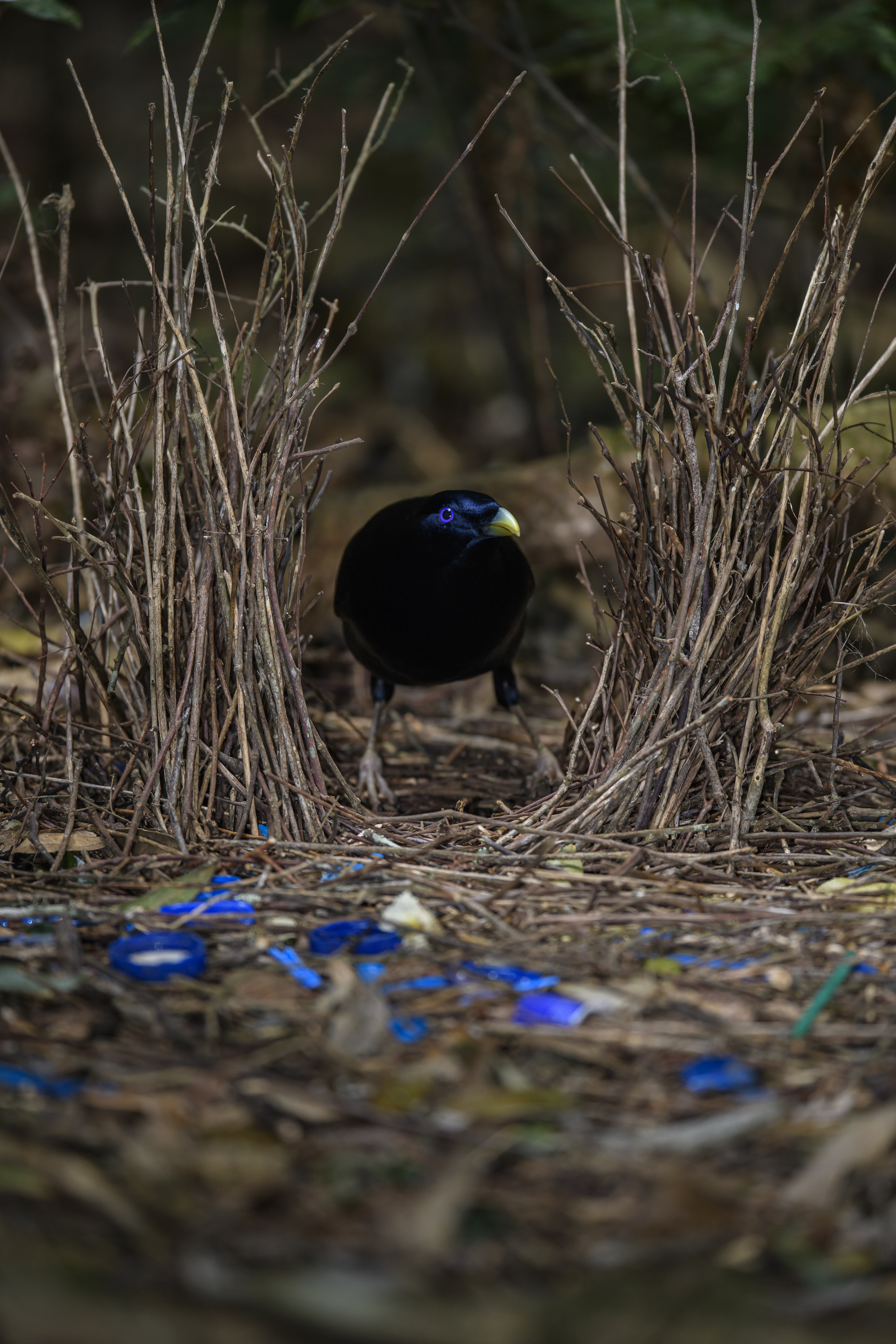 Photo Below: On our last day, we saw that something, probably rooting Australian Brush Turkeys, had damaged the bower.  The male Satin Bowerbird was already hard at work making repairs when we arrived. 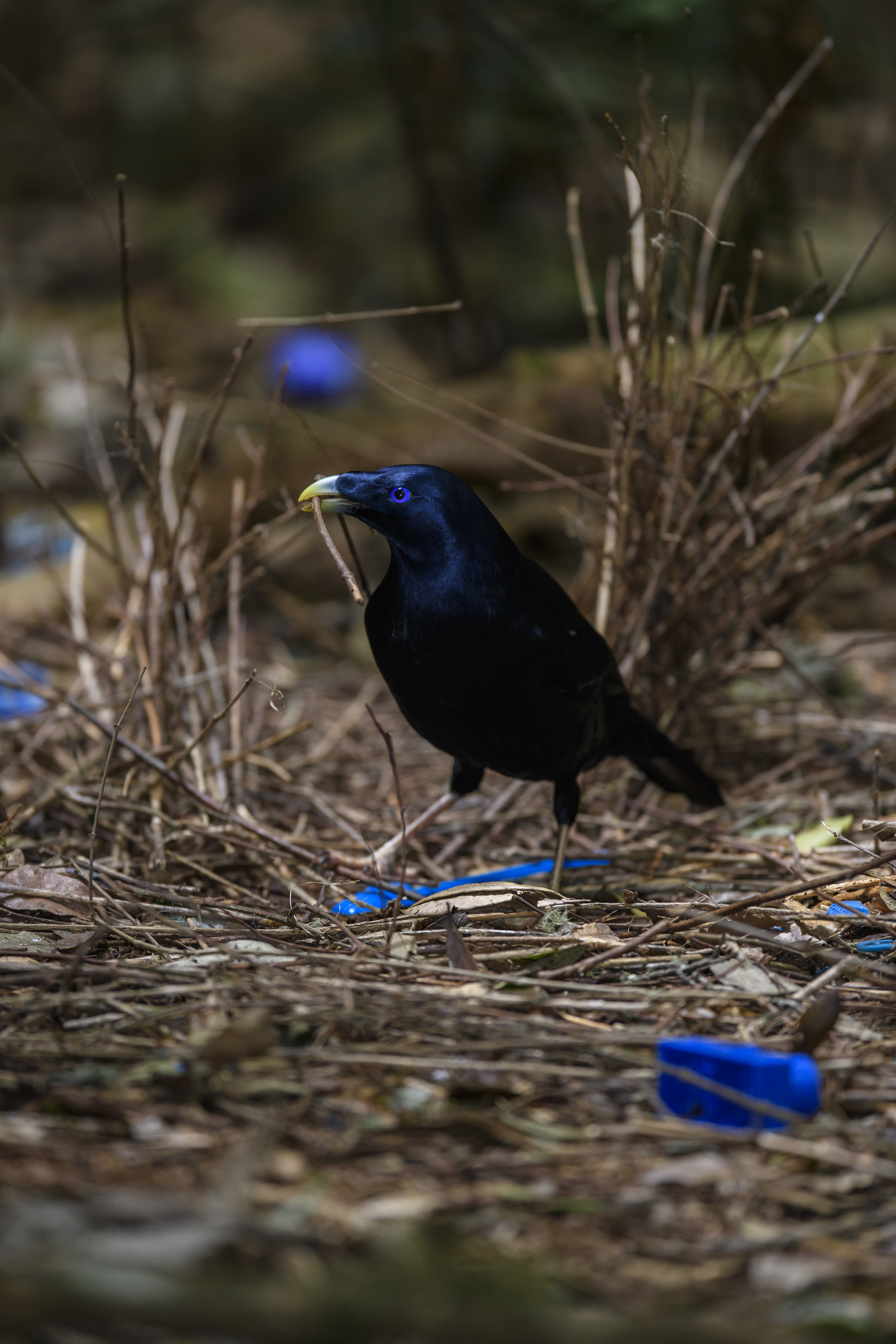 Photo Below:  The Satin Bowerbird takes a break but perches near the bower. 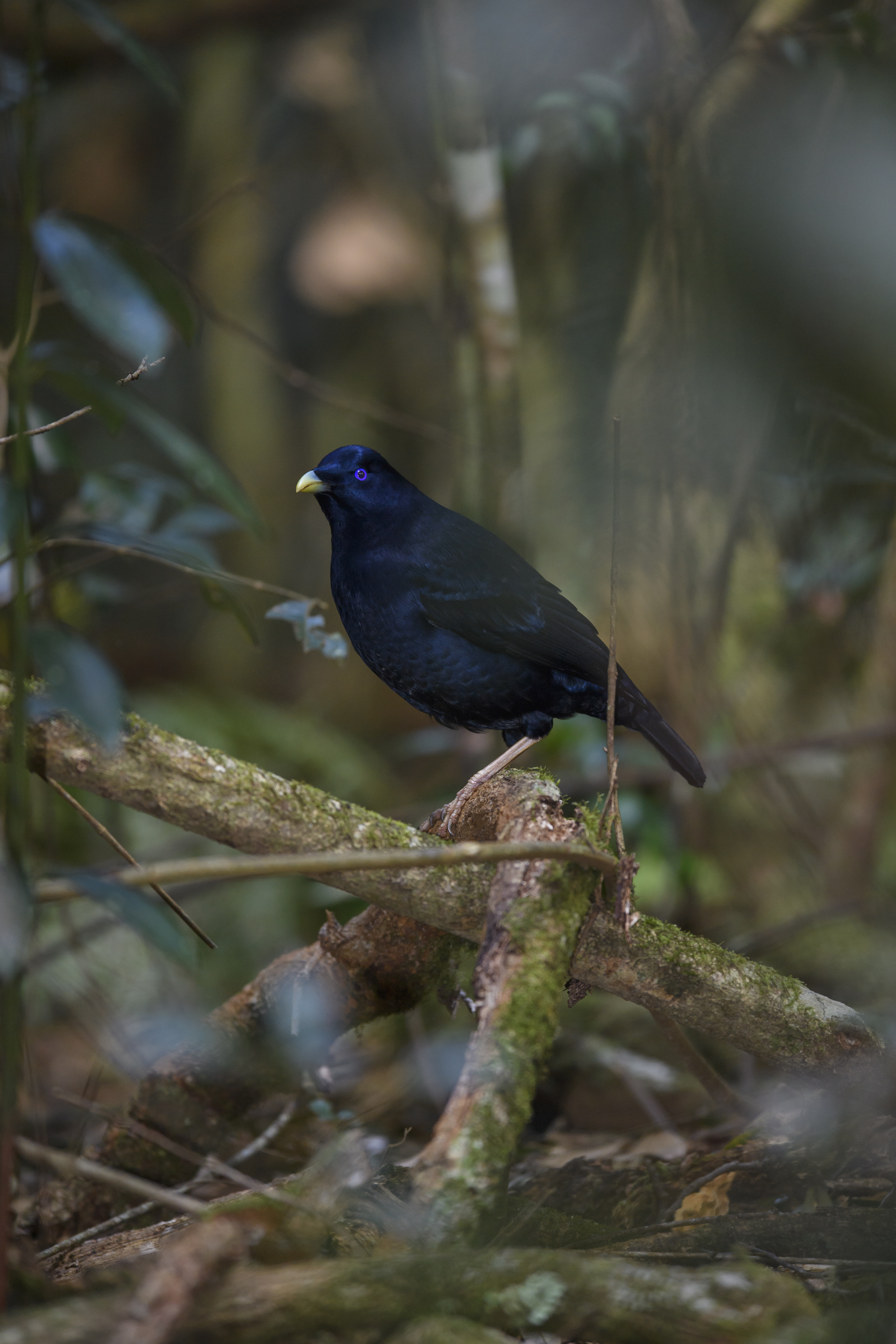 Photo Below:  Standoff between Bowerbird and  Pademelon. 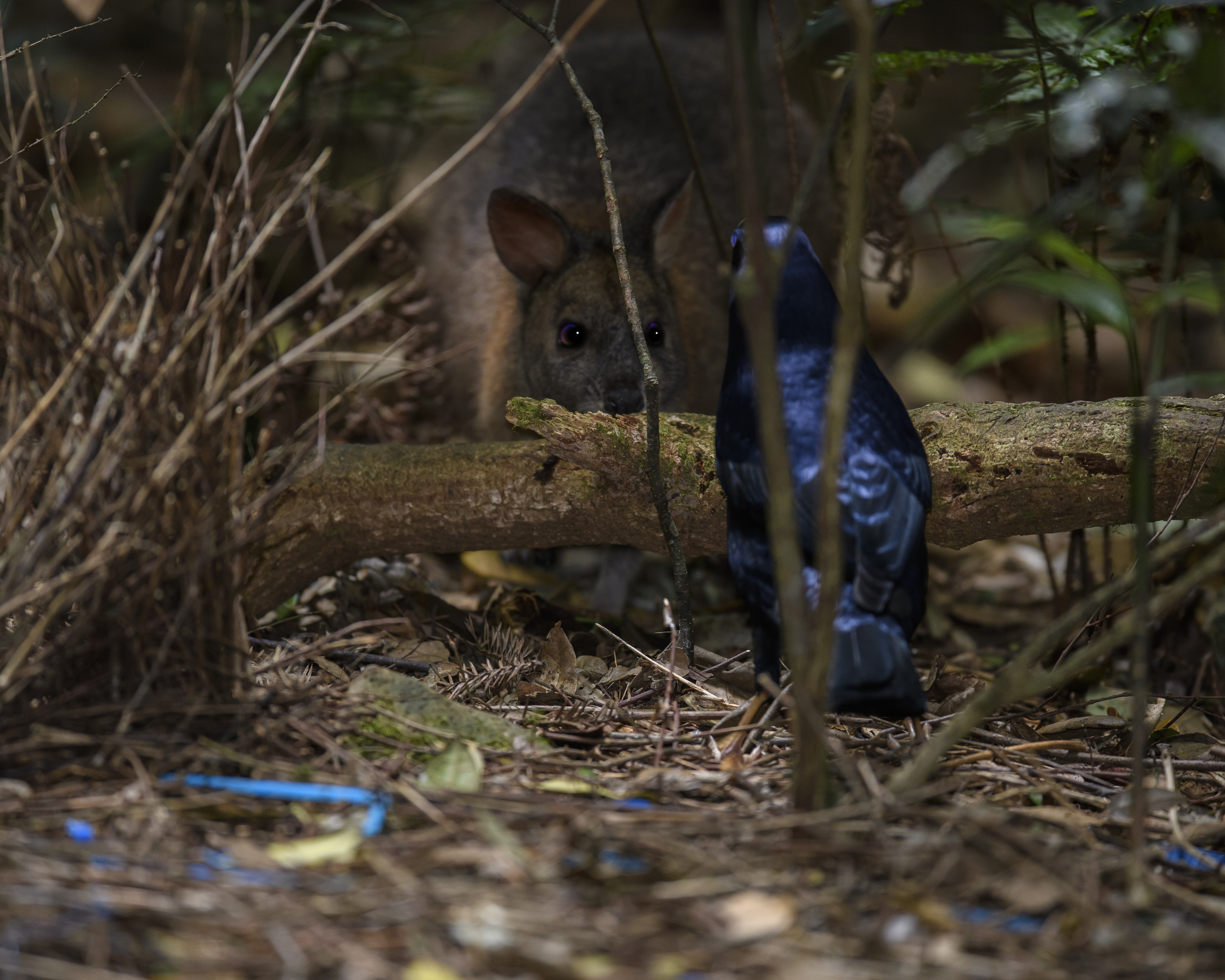 Photo Below: The only female Satin Bowerbird I saw, closer to another bower in the area. 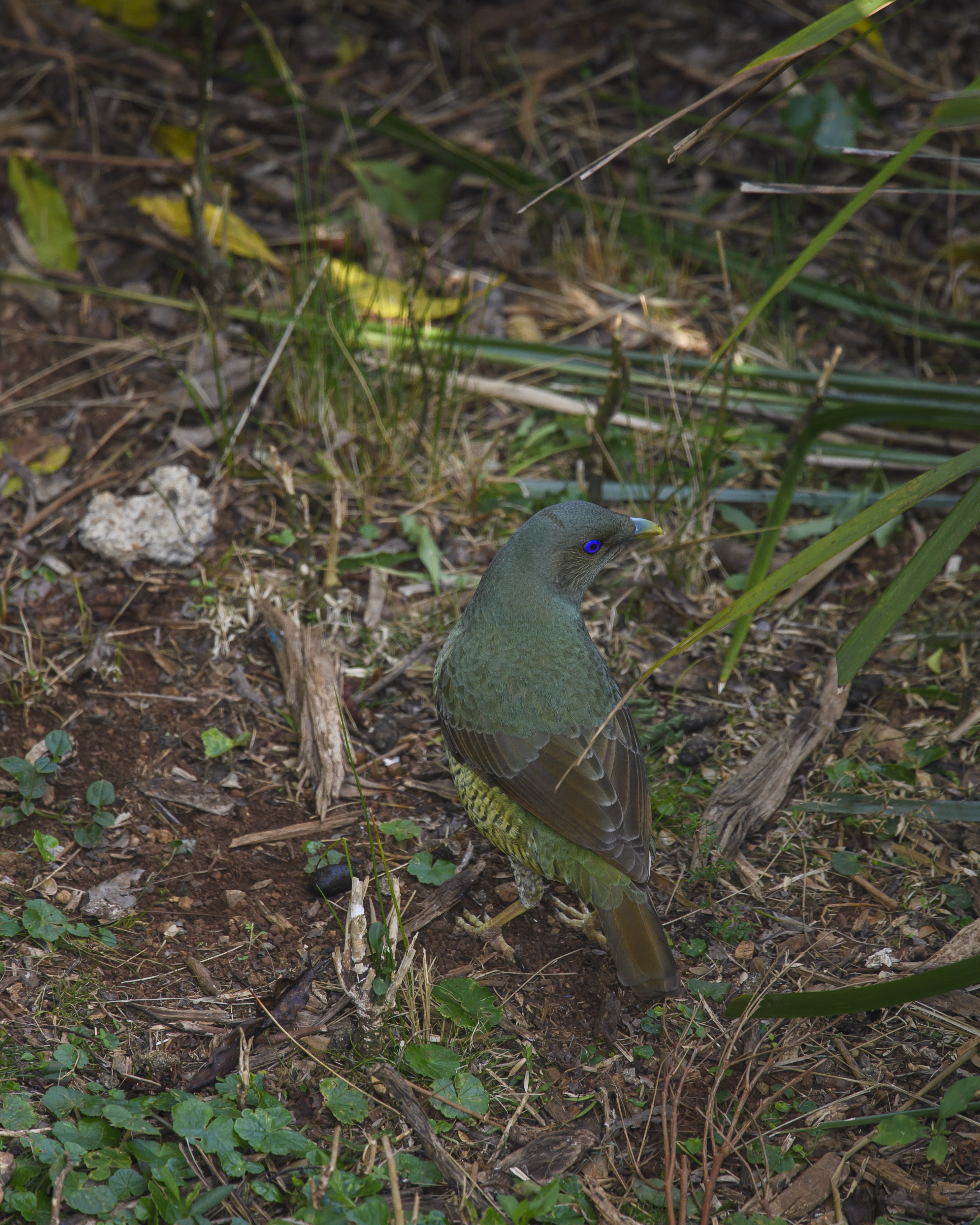 Photo Below:  Rainforest path near the bower. 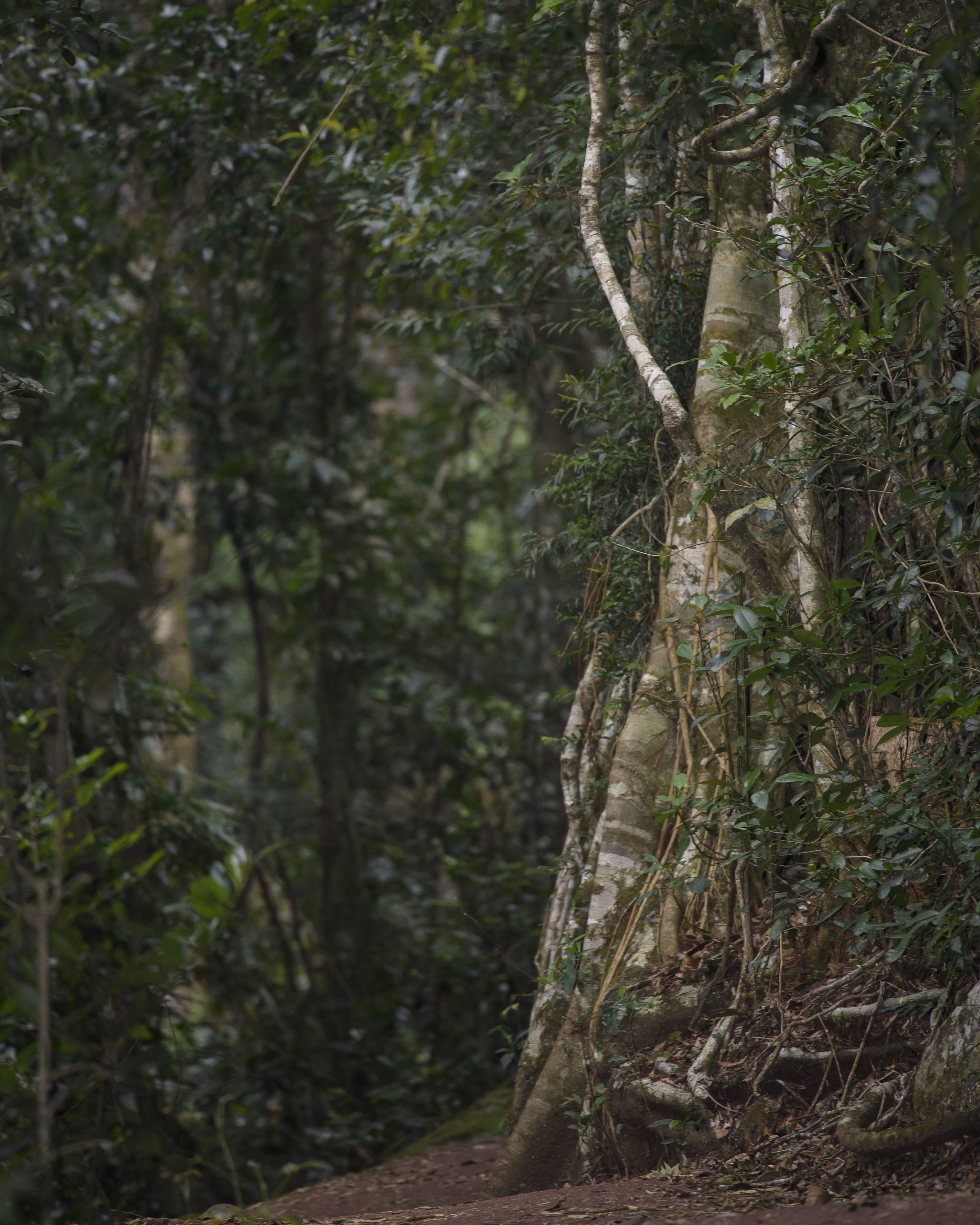