The Tawny Frogmouth, a nocturnal bird native to Australia, is so-named because its broad beak comes to a point and resembles the mouth of a frog.  Late one afternoon, Luke, our guide at O’Reilly’s, told us that he knew of some frogmouths in a wooded area on a nearby farm belonging to a member of the O’Reilly family.  We had a brief window of time to get there and back that afternoon and Luke drove us there.     On this trip, most of our photography destinations were close  enough to walk to but the wooded area, overlooking a lovely valley, was at the end of an incredibly rutted and bumpy dirt road a half hour away by vehicle so we had to drive there.  The vehicle was not spacious enough to carry our camera bags and our tripods so with our tripods stowed,  we rode with our cameras and 600mm lenses cradled in our laps as we bumped and jostled to our designation.

Because frogmouths are nocturnal birds, they sleep during the day.  They are fairly large birds, measuring between 15 and 20 inches in length, and although their tawny, spotted feathers help them blend into the bark of the trees where they perch, we were able to find (with the help of our guide) a pair that seemed not to be distressed over our presence far below them.   To sleep, the pair nestles close together, the male behind the female with the support of the trunk behind him.  They were not active so we had time to photograph them, high up in a tree.

After taking a few shots with bright backlighting, I moved my heavy rig to the other side of the tree.  That move was not a smart one as I had to walk on uneven, hilly ground with a distinct slant, covered with slippery  grass and rocks and broken branches but I was determined.   Two from our group, our guide and Sharon, were already over on that side of the tree and if they hadn’t been, I wouldn’t have made it.  With the heavy camera, lens, and tripod slung on my shoulder, their weight behind me, I discovered slogging uphill was not as easy as it looked and I expected to pitch over backwards at any moment.  Sharon and Luke came to my rescue, preventing my backward slide and when I finally got settled and focused on the Tawny Frogmouths again, I discovered that there was a distracting branch protruding near them.  But, I took the photographs anyway and that shot is actually my favorite because the male has rested his beak atop the female’s head.  Awww.  That shot is also a better view of the fronts of the birds.  In the second shot  I was focused on the back feathers and the depth of field was too shallow so the heads are not in crisp focus.  But the long whisker like feathers above their beak look almost like long eyelashes.  These are thought to protect their eyes from insect prey that thrashes when caught.   We never got to see the characteristic frogmouth shape of their beaks but I found them to be charming, mostly, I guess, because of my tendencies to anthropomorphize the actions of non-human creatures.  I think this pair of frogmouths makes an adorable, loving couple. 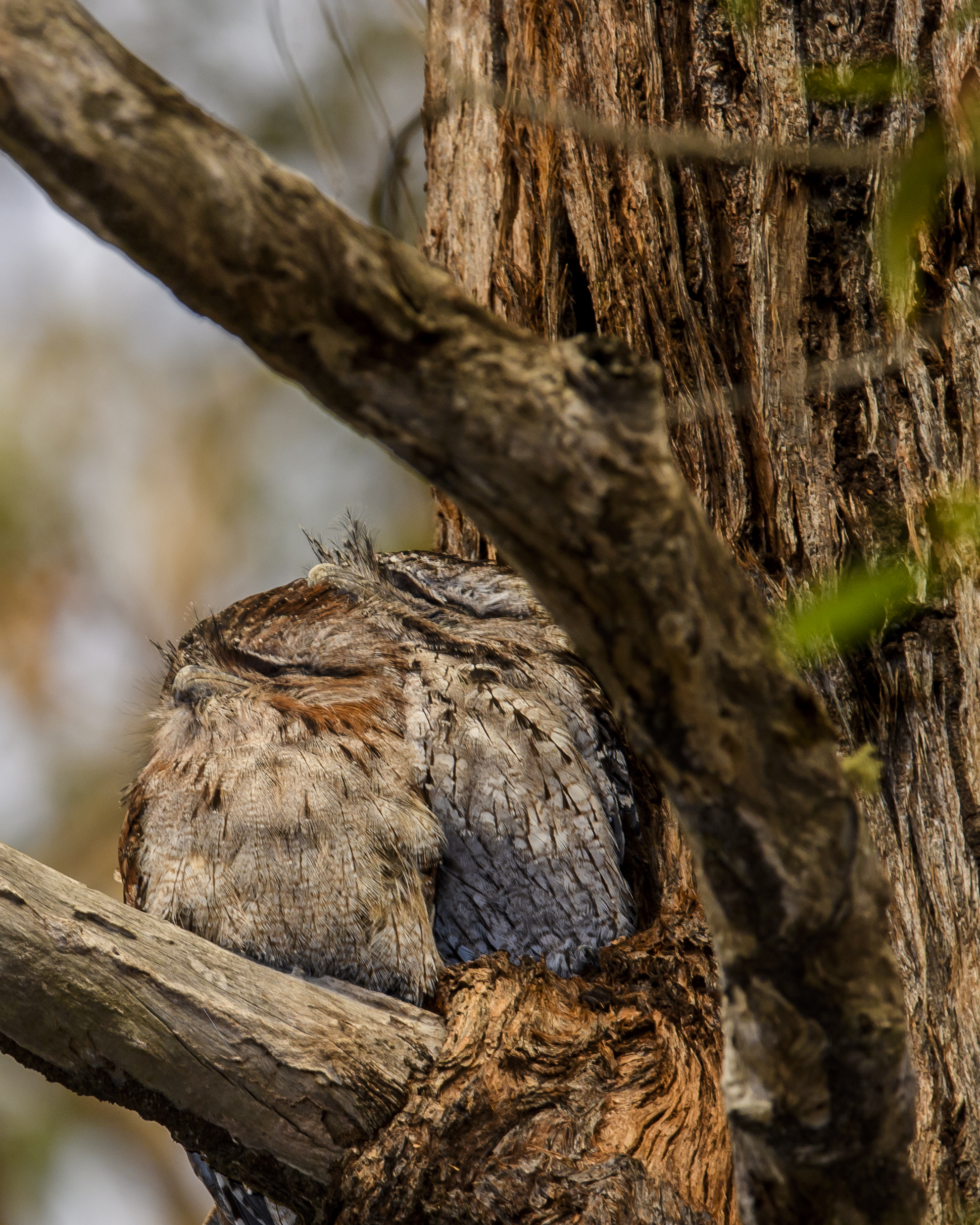