We cut our Galveston visit short by a day because I was given the opportunity to get a ride  with Sandy McNabb, my friend Connie’s husband, in SHEEPDAWG, the SeaRey Amphibious airplane that Sandy built.  Sandy is a former fighter pilot and Wing Commander in the Texas Air National Guard and a retired United Airlines pilot as well.  And, as it turned out, I got to ride in SHEEPDAWG on Saturday evening and on Sunday afternoon before I had to leave to fly to Oklahoma City for my next adventure.  And, I even got to fly the plane!  I was a nervous wreck when I had the controls so I relinquished the stick to Sandy after about 10 minutes  so I could resume my efforts to photograph eagles and other flying birds.  What a thrill it was to taxi down the driveway into Lake  Conroe, skim over the water, lift off, and soar with the birds for a couple of hours.

We did what I’m calling “Air to Air: Texas Style.”  I wasn’t photographing one aircraft from another but I WAS photographing a flying subject from an aircraft so I think that counts.  Sandy is an excellent spotter of birds and is gracious and extremely accommodating to his passengers who are photographers.  Once he spotted a bald eagle, sitting in a tree or flying, he’d fly by over and over so I could try to get photographs.  It is not an easy task to focus on a bird, either flying or sitting in a tree, when you’re flying at close to 100 MPH with the canopy open, wind whipping, trying to find the bird in your viewfinder, then focusing.  At least with the Nikon D5’s 12 frames per second speed, I had some chance of getting a few successful shots. And I did.   But only a very few!  I had a great time and I’d love to try this again.  Even the flying part!!

Thanks to Connie, my trips were documented.  She stood on the balcony with her 800mm Canon lens and photographed us as Sandy flew at balcony level past the house.  Here are two of the shots I managed to get.  First, a flying eagle taken from above late Saturday afternoon.  I took the eagle sitting in the dead tree on Sunday afternoon but Sandy made about six or seven passes  by this eagle in that tree and I took a dozen shots at each pass.  This is the only acceptable shot of all.  Credit for the photos of me, Sandy, and SHEEPDAWG goes to Connie McNabb.  First, I’m getting a pre-flight briefing; second, I’m ready; third, flying; and fourth, I survived! 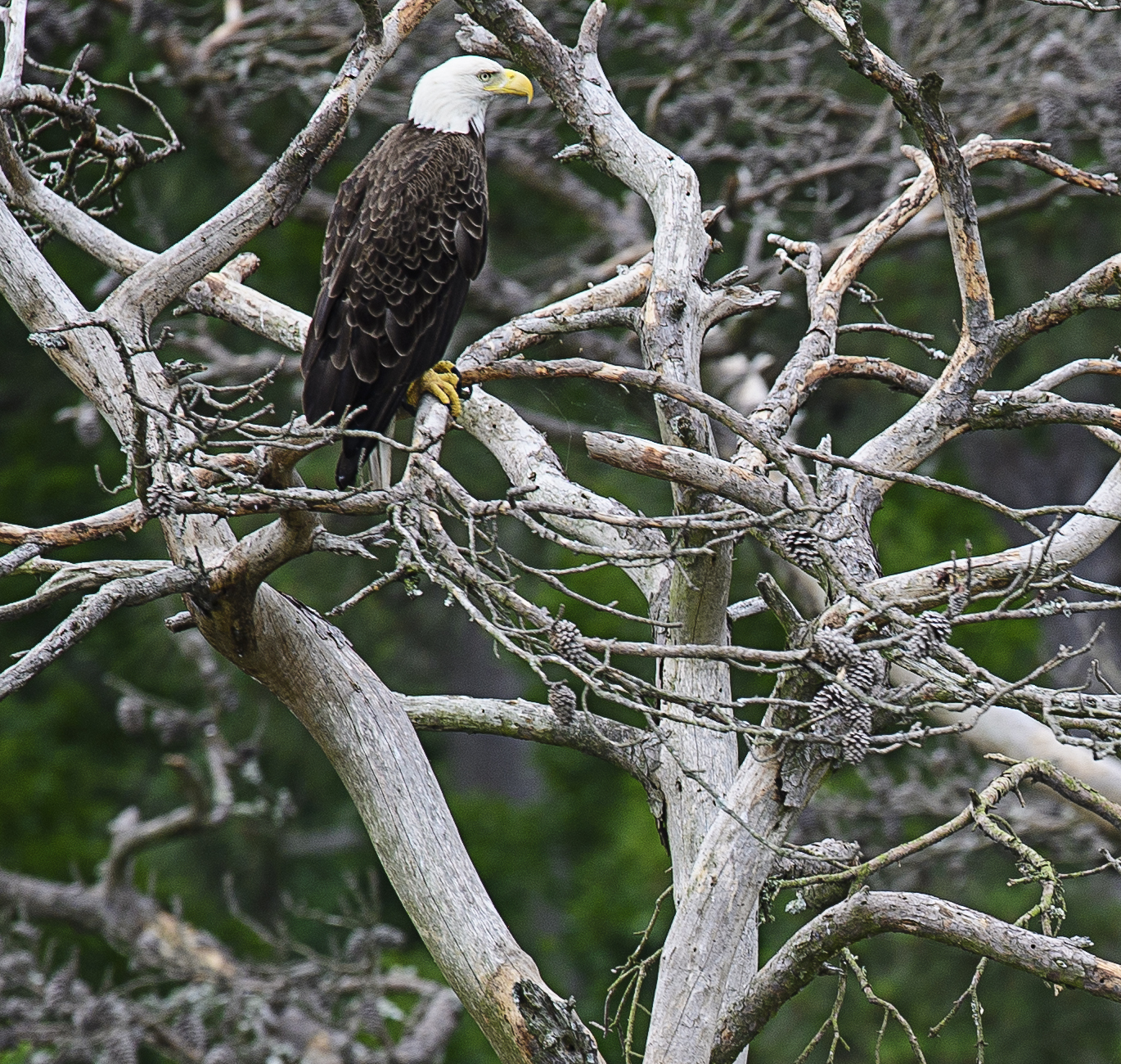 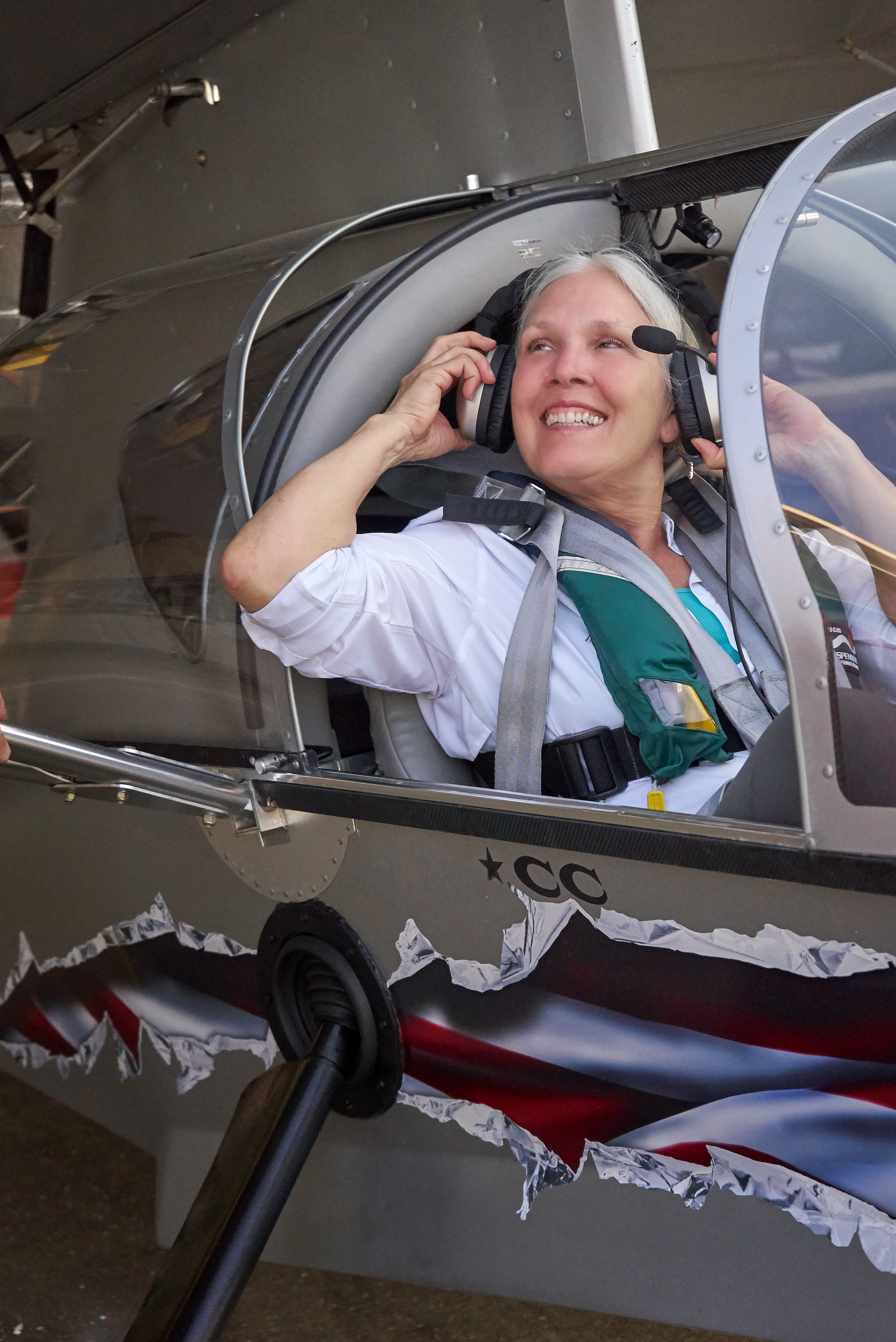 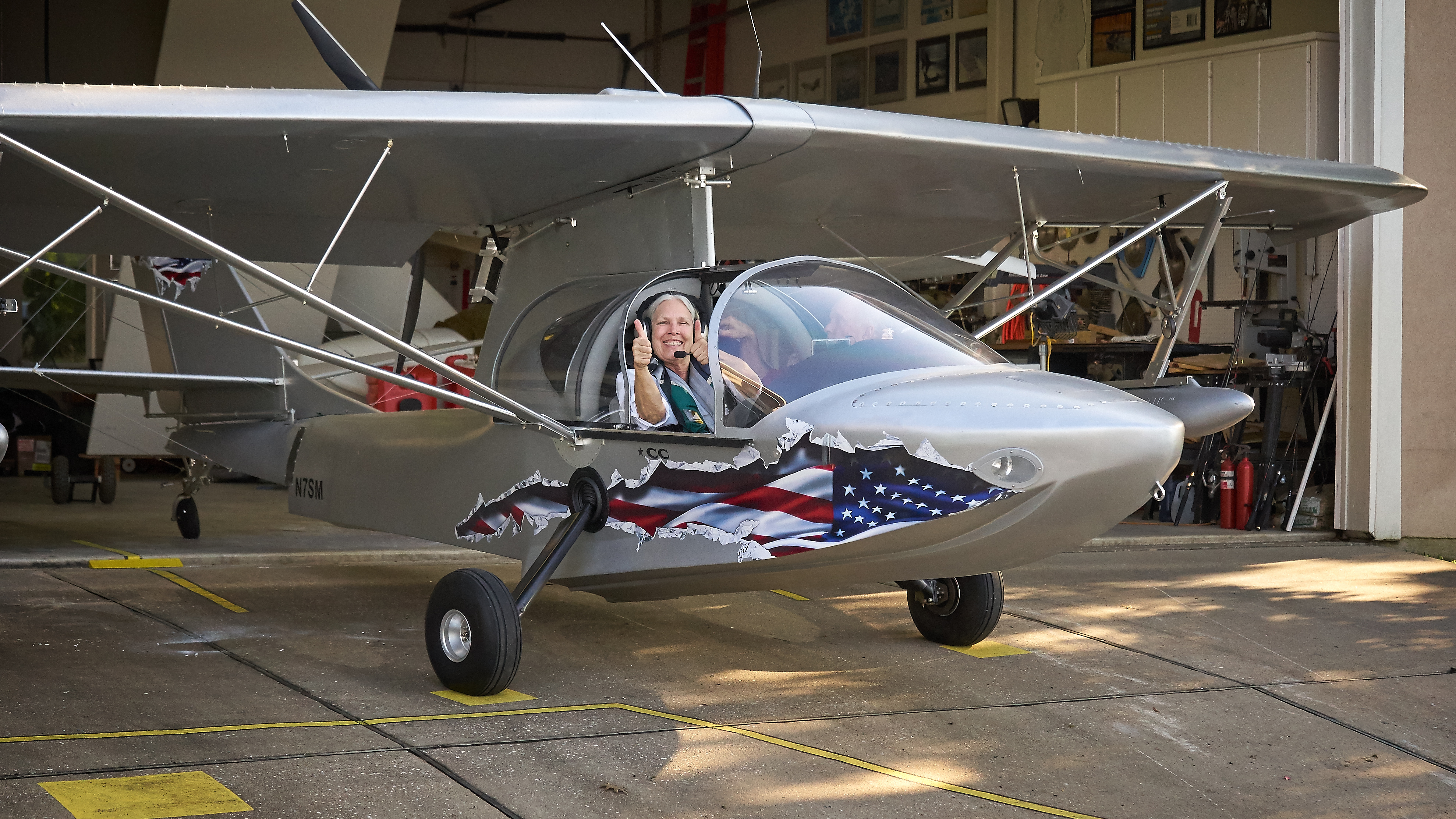 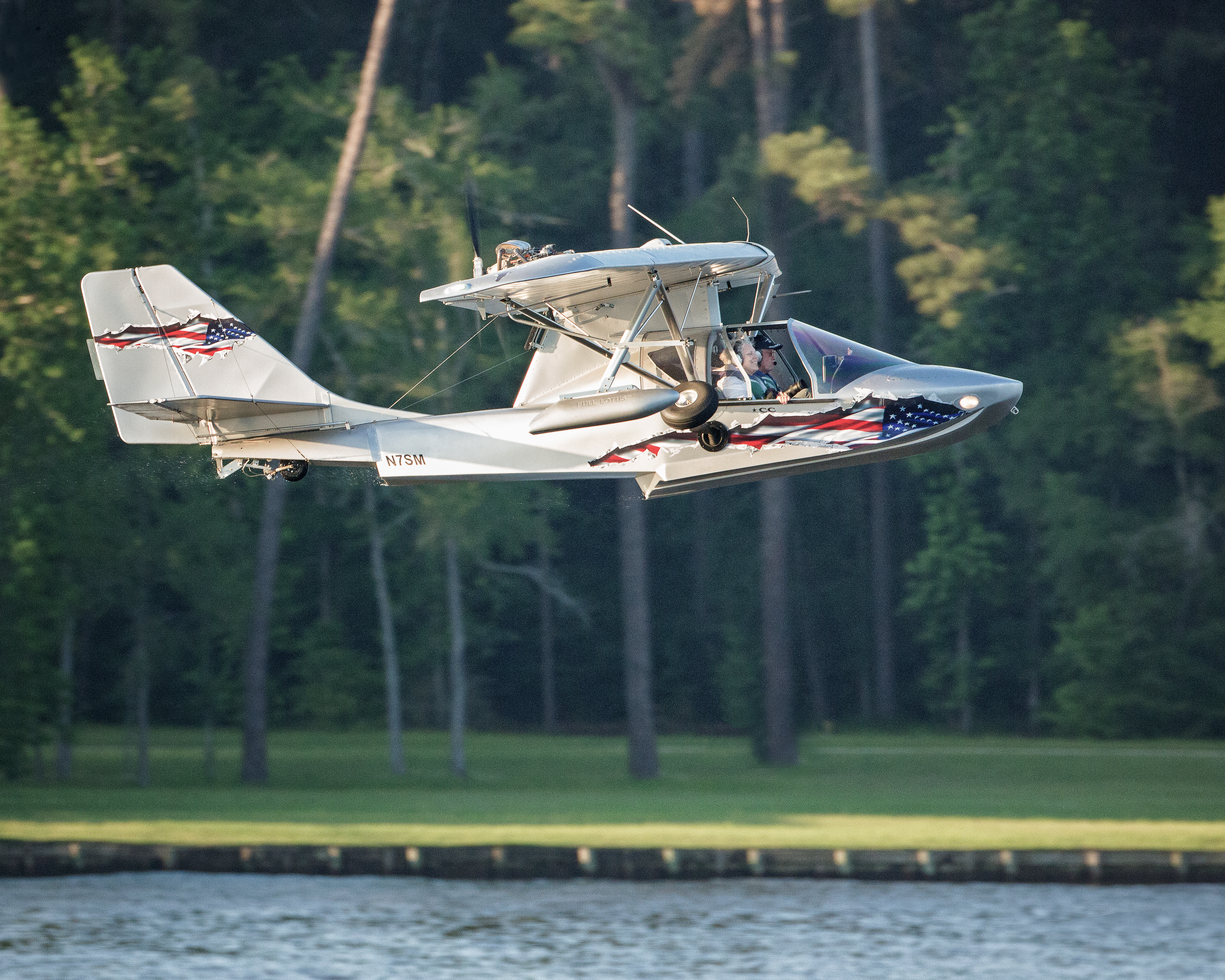 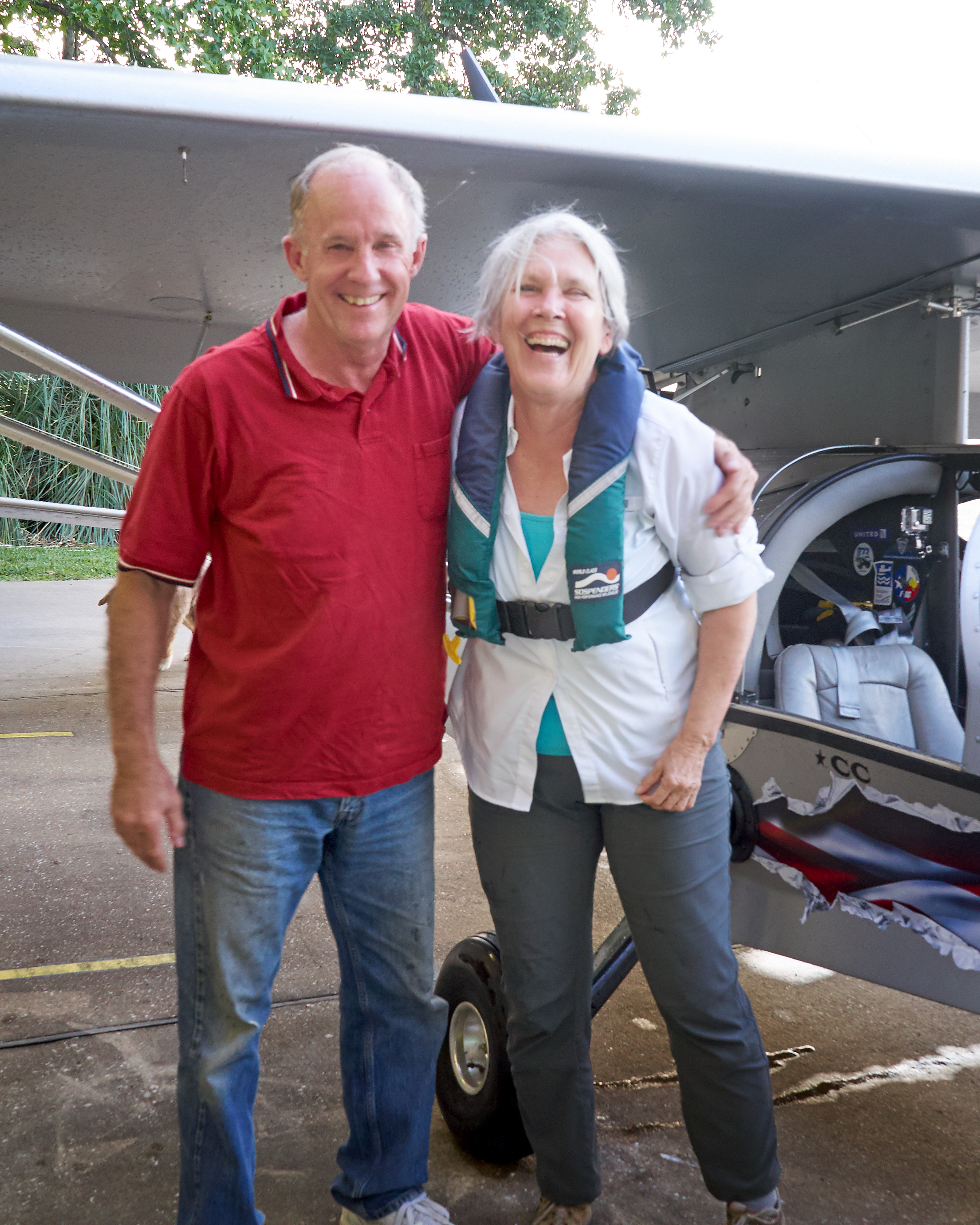