The quaint village of Oingt (a very nasally sounding name pronounced by putting a ‘w’ before the ‘a’ sound from ‘France’) in the Beaujolais Region is an enchanting medieval French town that has been restored and is touted as one of “Les Plus Beaux Villages de France.” We visited there on a damp, overcast day shortly after the release of the 2014 Beaujolais Nouveau and we sampled that region’s famously young wine there. While looking at some of the photos I took there, I was struck again by the town’s captivating charm. And, with each review of my photos, I discover more gems from that trip. I loved the windows there. Some were open, some were shuttered, some were barred, some were curtained, some were colorful, some were crumbling, and some were revealing. They were all different but they were all fascinating to me.

In the first shot, the cobblestones lead past several windows to what I find most intriguing in the window at the bottom of the hill; it appears to be a poster of a voluptuous naked woman. I don’t remember noticing that when I took the photograph.

Many of the windows in Oingt feature colorful shutters and curtains with delicate embroidery.

The third shot leads past a beckoning window to the Potière (potter) on the left. The purple window reveals the Potière inside crafting clay into pots.

In the last shot, the windows are austere and reveal nothing. Only one is open to allow the building’s occupants to observe anyone who might violate the ominous red no parking sign, although I’m not sure even France’s tiny compact cars could fit on some of the narrow cobblestone streets of Oingt. 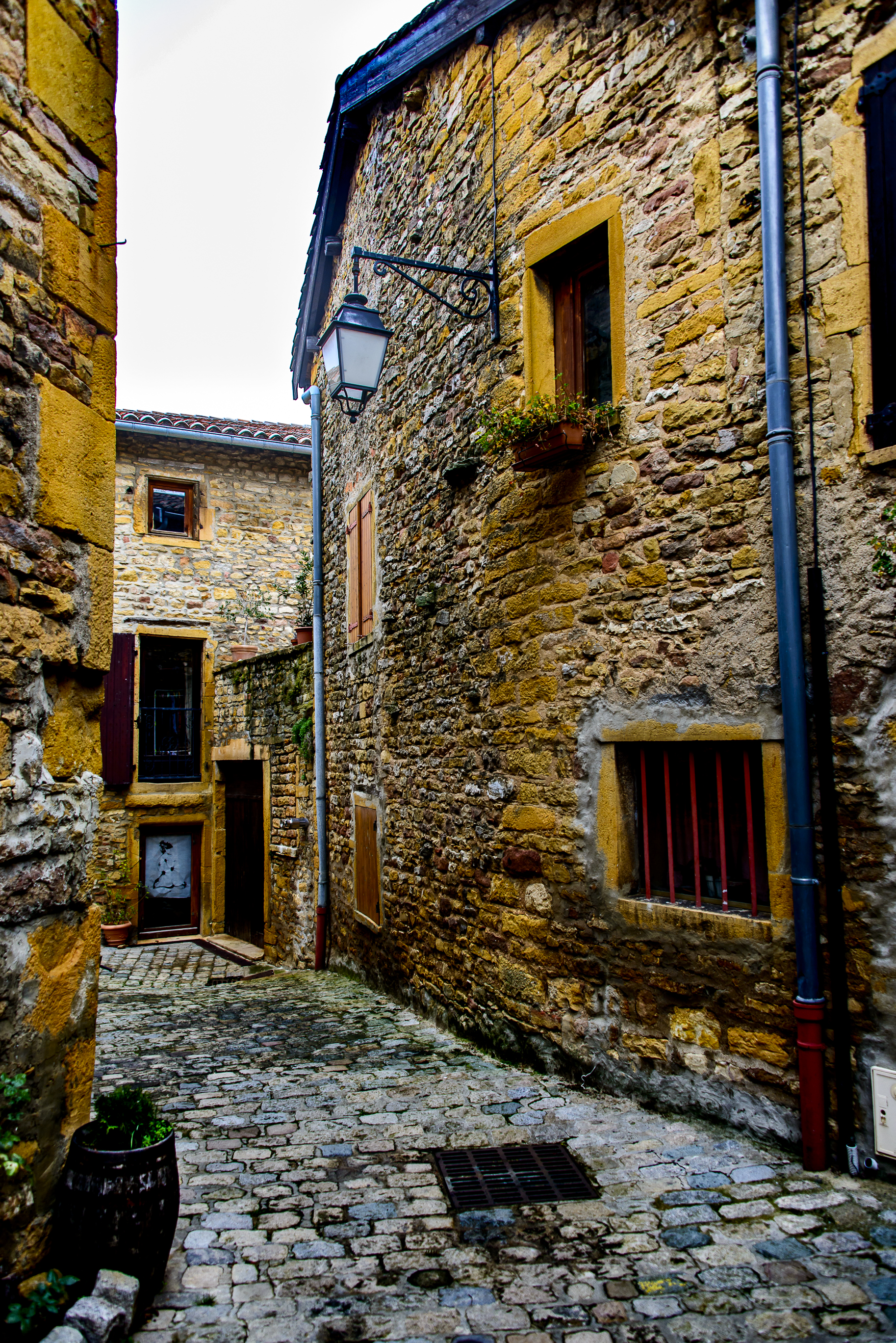 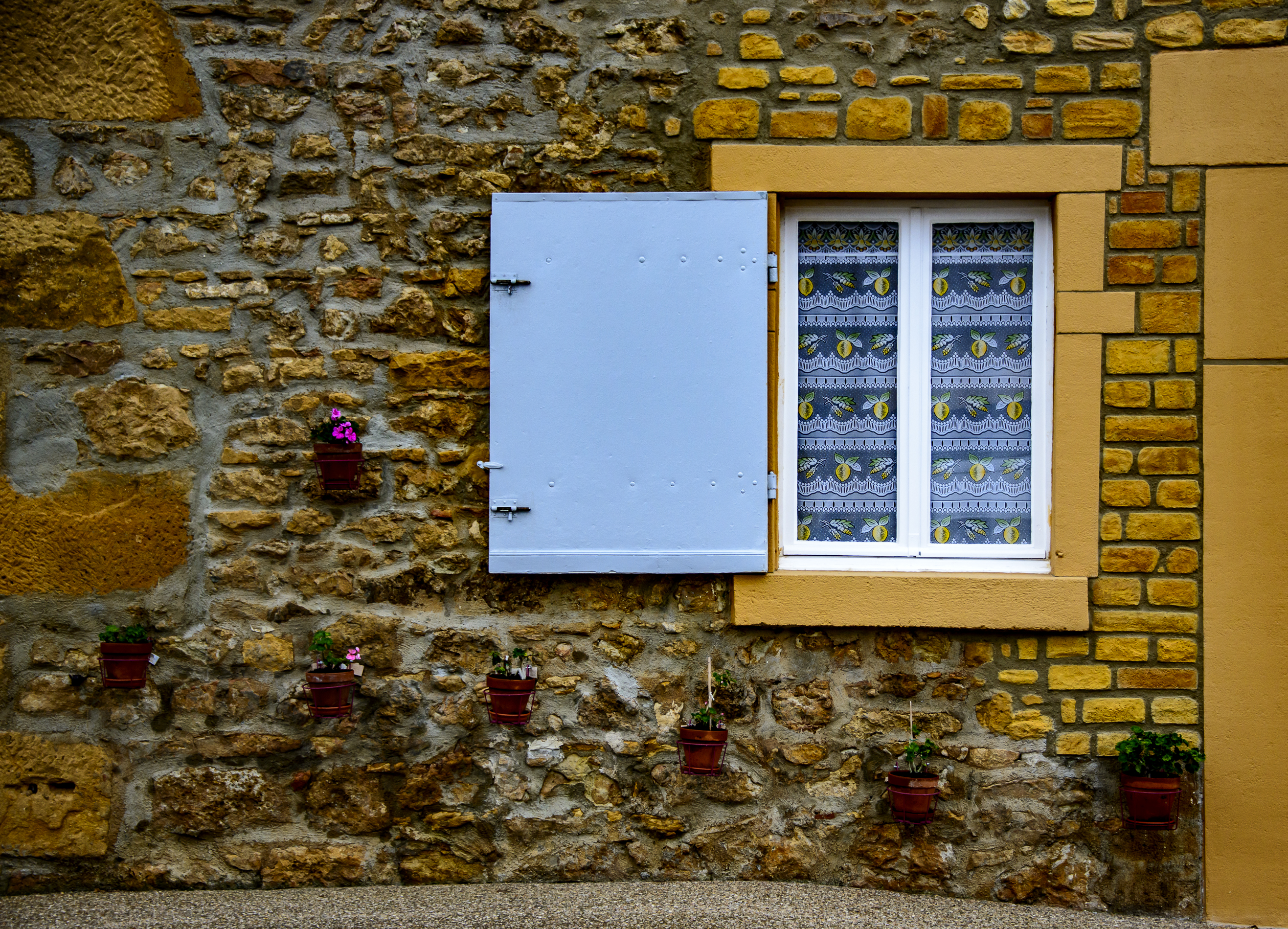 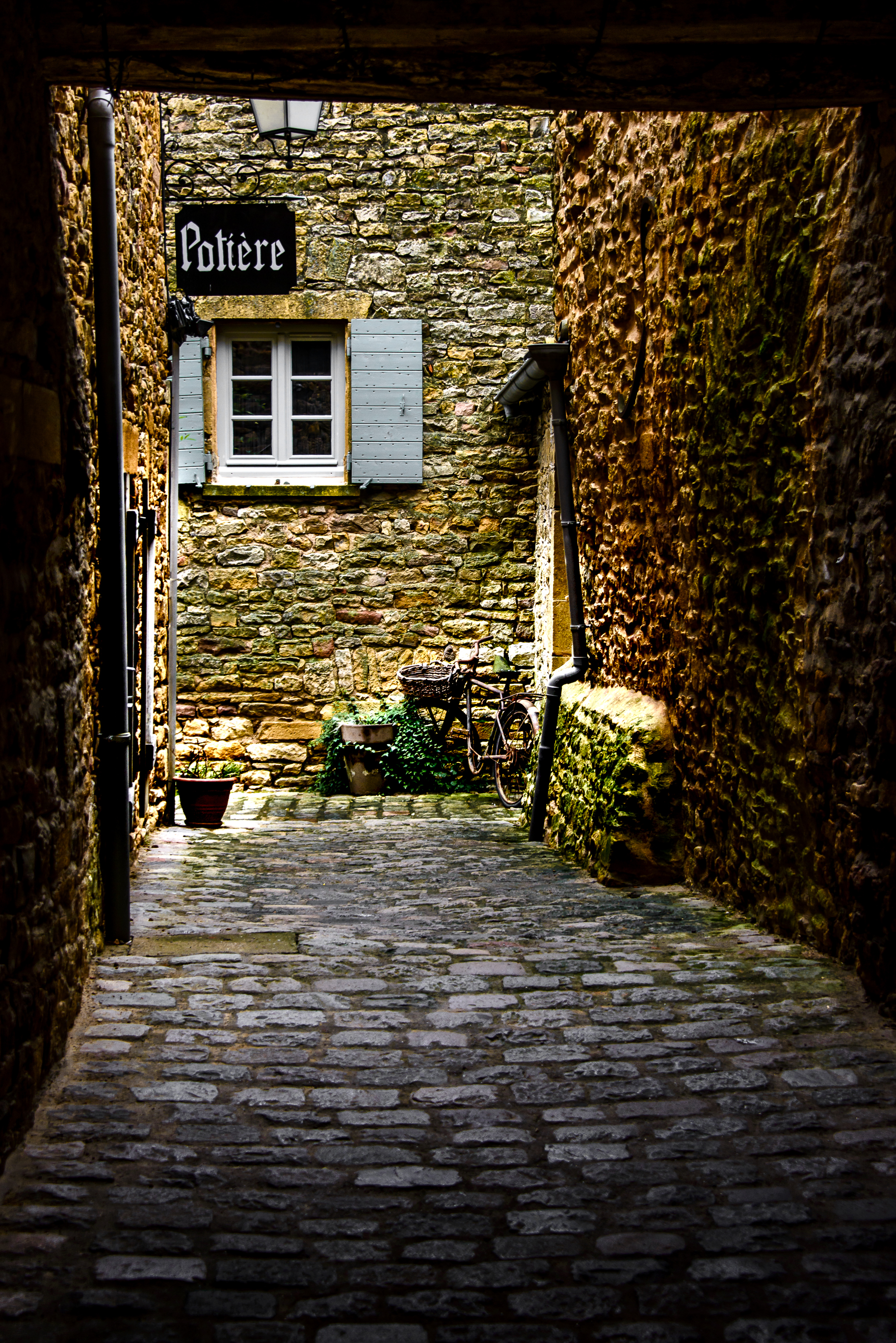 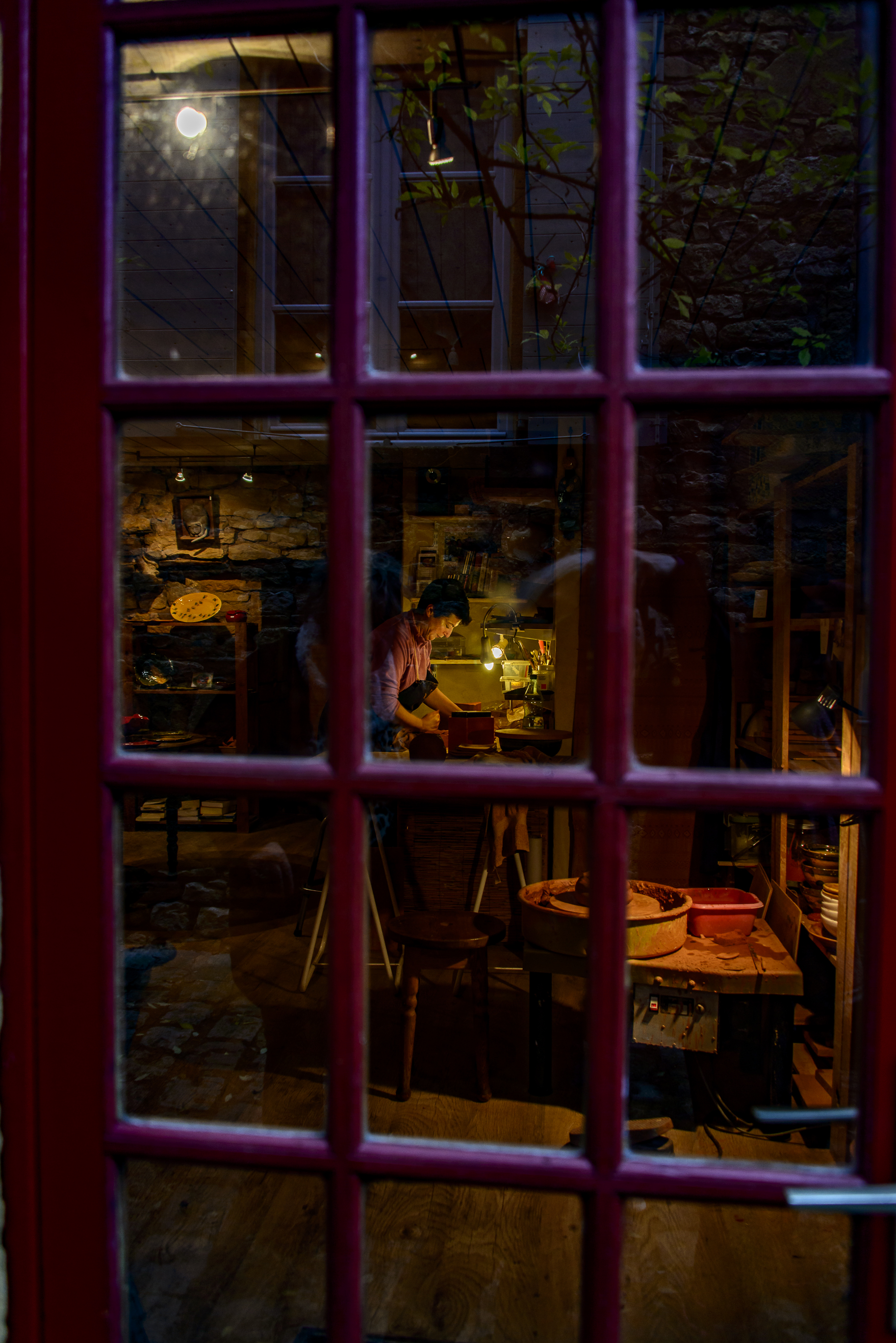 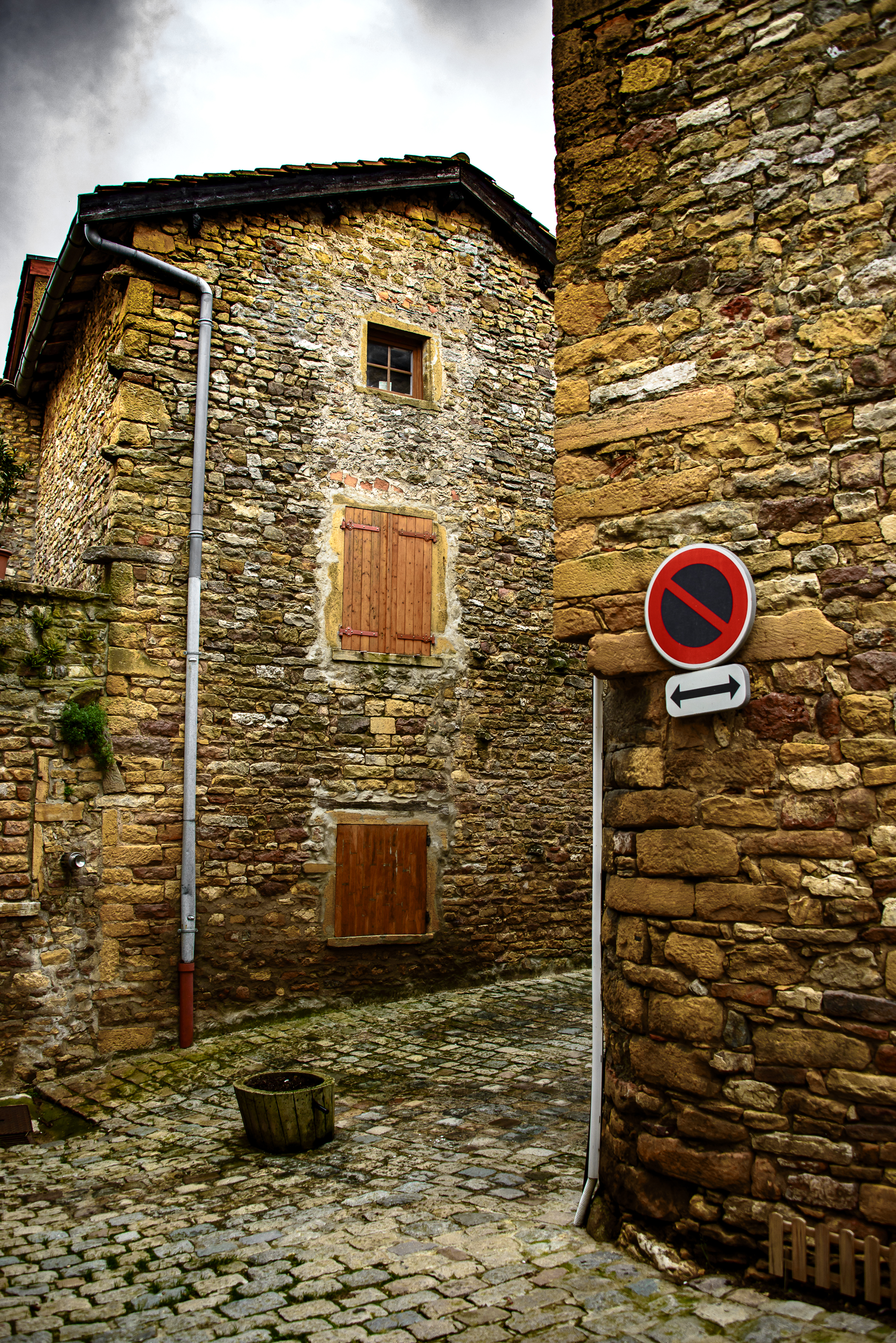