Playing the piano makes me smile.  And my piano is smiling too, thanks to my Nikon 8-15mm Fisheye lens.  Although I added a vignette to the edges of this shot, all 88 keys are in the photograph.  I set my camera a few inches away from the keyboard to capture it in its entirety and the sheet music too, which, by the way, is my all time favorite piano piece, Jack Fina’s Bumble Boogie.   Bumble Boogie is played “eight to the bar,” eight notes to a measure played very fast and its captivating beat is classic boogie woogie.

Bumble Boogie was written in 1946, the year I was born, and I used to hear it on the radio and on television in the 1950’s when I was a kid.   I loved its boogie rhythm and its play on Rimsky-Korsakov’s frantic Flight of the Bumble Bee.  I started taking piano lessons in the mid-1950’s.  When I went to Junior High School, rock and roll became a big part of my music world and I began to resist playing classical music.   Finally, after 6 years of classical piano lessons, the last two a constant argument with my mother about practicing, when I entered high school, my mother let me quit those weekly lessons.

After “hating” playing piano for what seemed to me like a lifetime, when I no longer had to practice and I could choose my own music, I began to actually enjoy playing again.  I decided to visit Stanroy’s Music Store in downtown Santa Rosa where in large bins next to the paper-sleeved 45’s from Elvis, Ricky Nelson (my first rock star crush), and the Shirelles,  I found a new world of sheet music that wasn’t classical.  So, for the first time, I had piano music that was modern and hip and not composed by Chopin or Bach or Haydn.  I was thrilled to find the sheet music for Bumble Boogie and I knew it was 75 cents well spent.   The irony that was lost on me then is that the music is based on a classical piece.

It took me months to learn the first three pages of  Bumble Boogie and before I knew it, I was in college and away from the piano.  When I came home to visit I’d play the first three pages of it but never got beyond that, let alone playing all eight pages.  Twenty years after I quit taking lessons, I got an electric keyboard and began to learn piano again.  I played mostly Rag Time Music by Scott Joplin and although the shortened keyboard required me to do some musical editing, it brought back the joy of piano music for me.  And, it was forty years before I once again had my own real piano, the Kawai upright pictured here, and the time to spend practicing music again.  I took jazz piano classes and those classes inspired me to relearn to play my precious  Bumble Boogie sheet music that had moved with me throughout my life.  After all that time, I finally learned to play it all the way through, and it was so gratifying to  play those tricky notes with my fingers flying across the keyboard.

Passion for photography has replaced my passion for piano but every once in a long while, I’ll sit down at the piano and play a little rag time or pop music from the 1960’s or even some Chopin.  It’s been several years since I played seriously but, what always makes me smile is playing  Bumble Boogie  even though I can barely make it through the first three pages again. 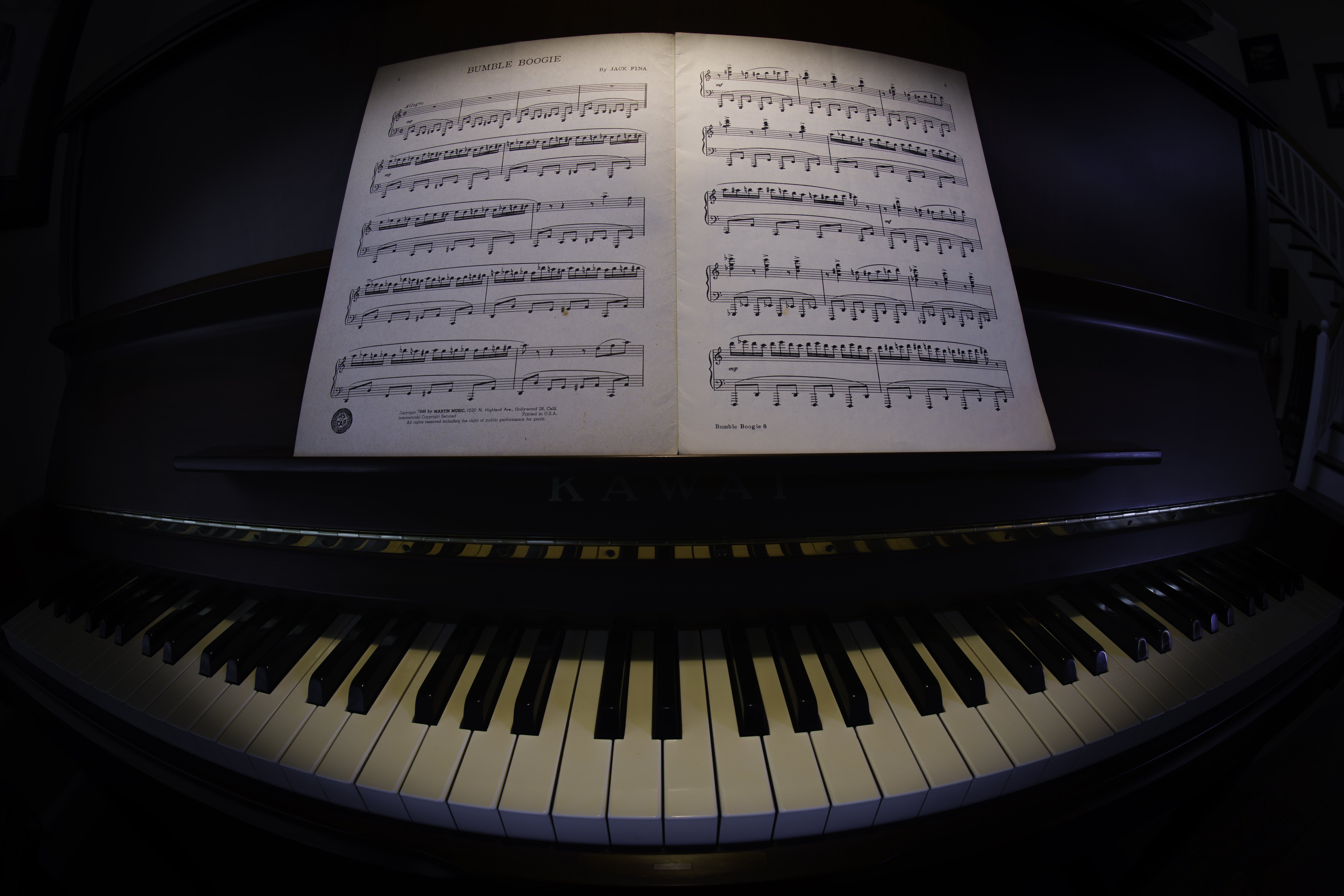