About 3 years ago, my brother John gave me a cutting from an old rose that graced the grounds at Sunset Line & Twine Co. in Petaluma.  When the plant closed and the building was sold, John took some rose cuttings from the many old rambling rose bushes there.   Until the rose finally bloomed for me, I didn’t know what color or shape the blooms would be and I didn’t remember what the rose looked like at Sunset. A little Internet sleuthing revealed that the rose is called “Veilchenblau,” a mauve hybrid multiflora rose cultivar and the best known violet rambler.  The cultivar was bred by Hermann Kiese in Germany in 1909.  The rose was probably planted at Sunset about 100 years ago.

I was thrilled to get the cutting but I let it languish, still in its original pot, a lone stick with a single leaf cluster barely hanging on.  I didn’t have much hope for it.   When my friend Honora came for a visit and saw the pathetic plant leaning against the fountain where it had managed to survive despite my negligence for months, she insisted on planting it in a proper pot.  After several months, a couple more leaf clusters grew.  Last year, the rose, a climber, sent out dozens of long branches covered with leaves but without a single flower.  That’s changing.  This year, the plant is once again covered with leaves but now there are hundreds of clusters of small rosebuds.  I can’t wait until they all open.  John tells me that this rose blooms once in the season but it looks like that one bloom will be a spectacular one.

Saturday, during the rain storm, I noticed a couple of the buds had opened so Sunday I went out to memorialize the plant’s first official bloom.  I noticed a hover fly feeding on the flower pollen but didn’t notice the second bug until I downloaded the photos.  The legs of both are covered in pollen.   This rose blossom is about one and a half inches in diameter.

I used my macro lens and attached the 1.4x teleconverter to it so I didn’t have to cram the lens right into the flower to get this close and the bugs stayed where they were.  Focal Length 150mm; ISO 1000; f/20; 1/80 second shutter speed. 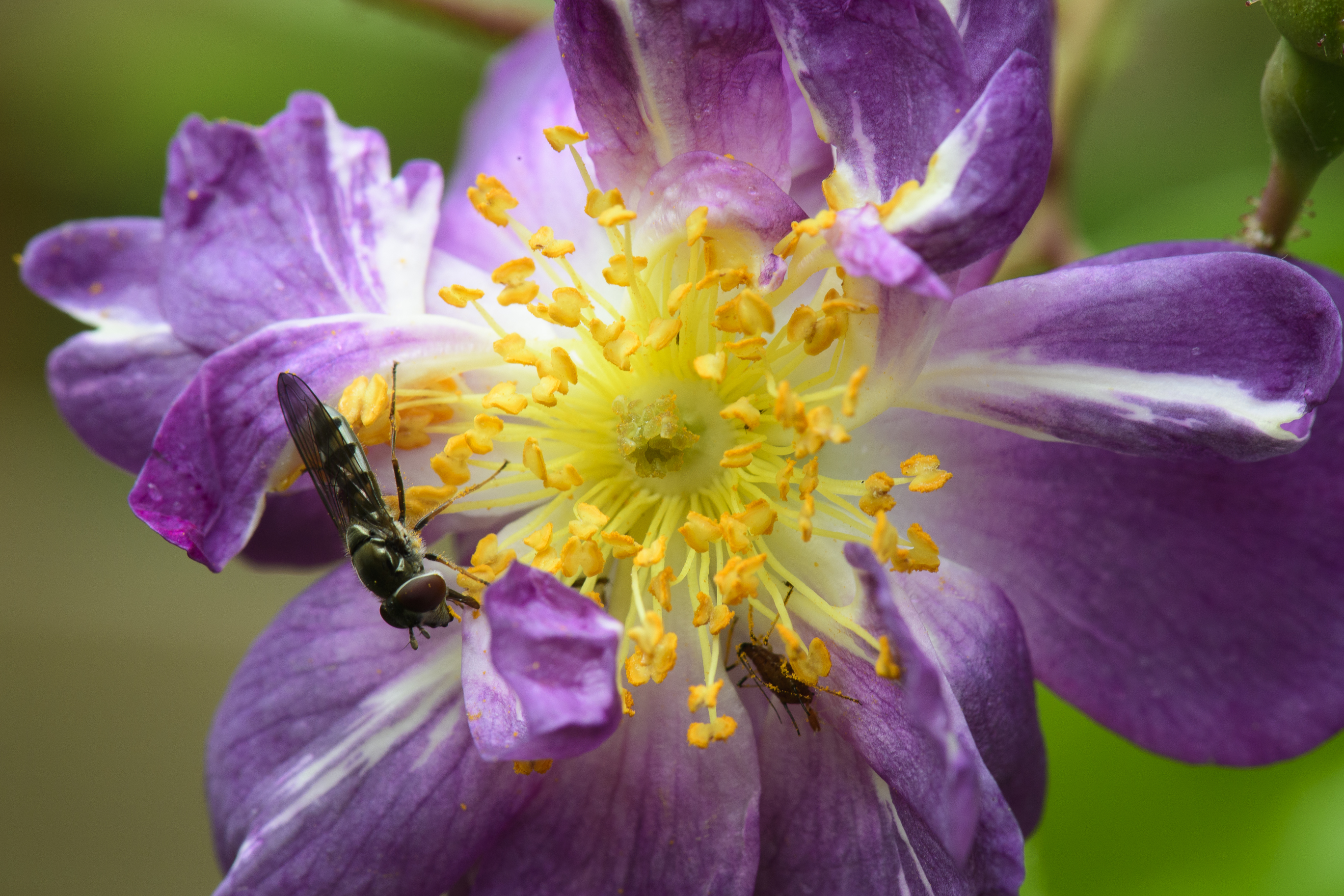 One thought on “2016—Old Sunset Rose And Friends”