I’m looking forward to the return of my Nikon D800. UPS advised me it will delivered home today. Three weeks ago, Nikon notified me that they would clean and service my camera at no charge and that if any thing needed replacing, they would do that at no charge as well. I took them up on their offer because I knew the camera needed a thorough going-over and it had a few things that I was a bit concerned about, including more than 133,000 clicks of the shutter. Since I had the D7100, I felt fine about sending it away. But I have become so used to having two cameras available that the past three weeks have been oddly stressful for me.

The earlier than expected arrival of the 600mm lens has relieved my stress a bit and I have taken very few shots with other than the super telephoto lens in the past couple of weeks. With that, though, comes a different kind of stress. At first I was stressed over the tripod mounting plate which I had to jerry-rig until the proper one arrived from Really Right Stuff. With that stress alleviated, I’ve been trying to capture activity at the fountain and hummingbird feeders with varying degrees of success.

I’ve tried to anticipate where the hummers will be so that I can prefocus and compose the camera and have the remote shutter release set so that no matter where I am if I see the hummer at the feeder or the fountain, depending on where I’m focused, I will be able to get a shot. I also decided to attach the 1.4 teleconverter which makes the focal length a whopping 1200mm on the D7100. On the D800 it would be 850mm.

The best laid plans don’t always result in success. The ball head I have now is a fabulous improvement over the one I used in Costa Rica where I finally gave up shooting from a tripod because I wasn’t capable of manipulating the ball head efficiently. I now realize that what I really need, and what is on order but not here yet, is a gimbal head to make my super telephoto lens adjustable at the touch of a finger. The gimbal head was a special order item from B&H Photo and I’m not certain how much longer I’ll have to wait for it. Sunday morning, as I struggled to follow the hummer cavorting in the fountain, I had trouble with composition because I couldn’t quickly move the huge lens smoothly enough and then refocus on the hummer’s eye to get a clear, crisp shot.

The best shot I got is in focus and does have a bit of a gesture, though, so I’m happy about that, plus, this shot is not cropped. I took it from the back door, about 30 feet away. 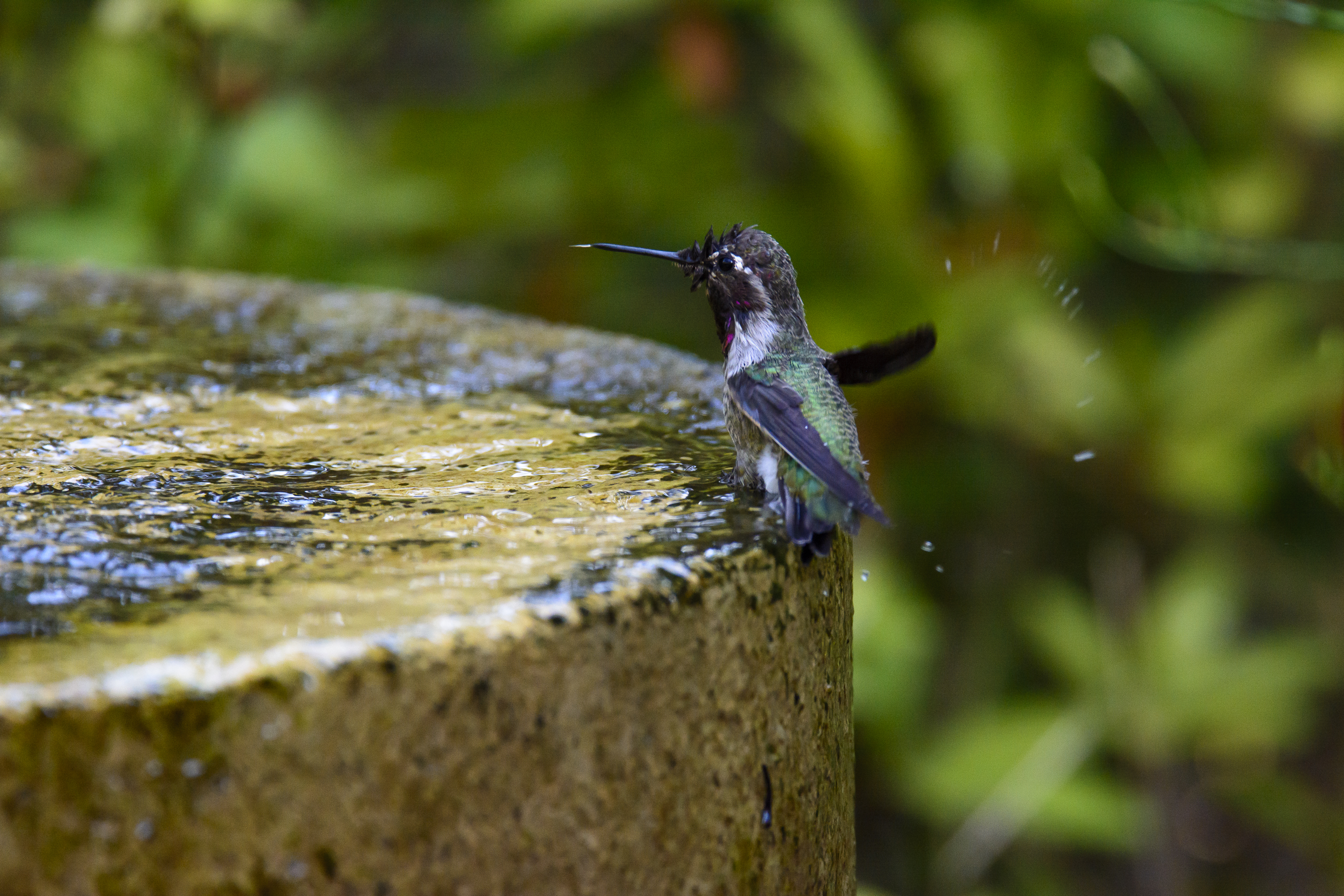