We saw Red-tailed Tropicbirds, White-tailed Tropicbirds, Red-footed Boobies, Brown Boobies, and Great Frigatebirds, all in abundance.  But, one of the largest birds we saw there was the Laysan Albatross with a 6 to 7 foot wingspan.  And, I’m not really certain, but I think we saw the same Albatross every time.  These Albatrosses were nesting in the wooded area near the Kilauea Lighthouse which is in the midst of Kilauea National Wildlife Refuge and they used the grassy slopes near their nesting sites as launching pads to hurtle their bulky bodies into the air.  About every fifteen or twenty minutes, an Albatross would glide effortlessly by us, sometimes so close I couldn’t get it completely in the frame.  The light came and went as did the rain storms which drove us frequently to the shelter of the eaves of the visitor center next to the lighthouse.  We waited as the rain came down in torrents, then returned to the railing when the birds began to fly by us again.

This Laysan Albatross was illuminated with beautiful light when the sun peeked out briefly.   The large bird stands out against the dark rocky outcropping off shore. 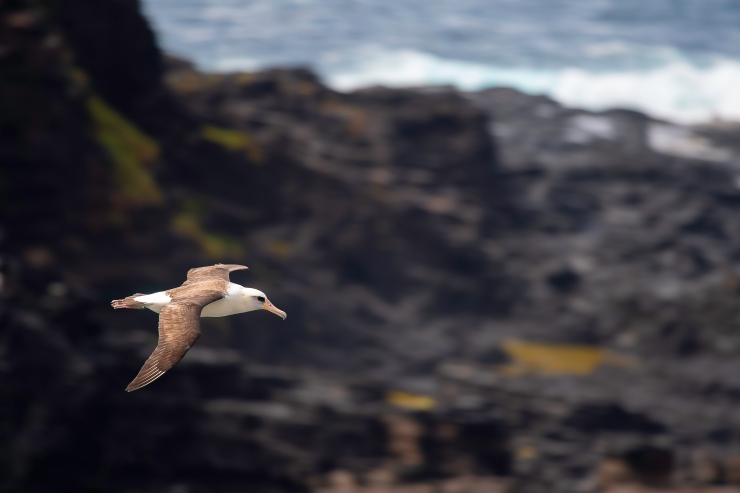