Delicate Arch is one of the iconic views of Arches National Park.  This was my fourth visit to the park in the past ten years but my first visit to Delicate Arch which is a stunning geological landmark.  The trail up to Delicate Arch is a three mile round trip trek from the parking lot to the arch, much of it on what is called slick-rock something especially precarious for someone like me who is afraid of heights and who lacks sure footedness. It took us most of an hour carrying our camera gear on Thursday afternoon.

By late afternoon, we arrived at the top, looking down at the arch which is located near the bottom of what is considered a bowl.  We were there to photograph heavenly bodies with the arch as a focal point for our photographs which means  we waited until dark for to take them.  When my group of four other photographers, including Moose Peterson, decided to move down into the bowl, I was at first, frozen in place.  Afterall, it was quite a trek up to the arch and for someone who is afraid of heights, getting there was a harrowing experience.  Now that I was at the Arch, seeing the bowl of slick-rock that surrounded it, I was even more concerned about whether I could venture closer.  But, as the light faded, I managed to move across the bowl to join my companions in the relative safety of some large rocks that both sheltered me from the wind and kept me from rolling off the edge of the bowl.   I couldn’t bring myself to venture out into the bowl to photograph heavenly bodies with my friends but I did manage to  capture some elegant photographs of the arch and the Milky Way behind it despite my concerns.  A little light painting added some detail and interest and this photograph ended up one of my favorites of the evening’s shoot.  The photograph shows the streaks of a few of the airplanes that flew by our lenses that evening.  Because we used long shutter speeds, they appear as streaks in the  night sky.

When the shoot ended and it was time to return, it was dark and well past 7:30 PM.   We still had an hour’s walk back down to the parking lot…and this time in almost total darkness…just starlight and out headlamps to guide us. If it weren’t for Moose, I’m certain I wouldn’t have made it either up or down.  He was careful to make sure I followef the route that best suited me, that is, the path with the fewest obstructions and least slope.  When we got to the top, he helped me maneuver over some rocks so that I had an unobstructed view of the arch.  Until darkness enveloped us, there were quite a few visitors to the arch.  Most visitors took a few selfies, then returned almost immediately to walk back down to the parking lot.  By the time we left, we were the only people left at the arch.  The walk down was, surprisingly for me, much quicker than the trek up.  I followed Moose’s trail, illuminated by his flashlight.

When I looked at the photographs, I was at once thrilled to see the Milky Way and concerned that I didn’t know how to finish the photographs to make them pop.  Moose helped me at a Digital Darkroom session Friday morning where I learned to bring up clarity and whites in Adobe Camera Raw to emphasize the Milky Way, plus a few other tweaks to make the photos really come to life.  I’m not sure why this iconic natural phenomenon is called Delicate Arch.  Perhaps it is because it stands alone, without any surrounding structure to support it.  For whatever reason it got its name, it and the surrounding area make for beautiful photograhs. 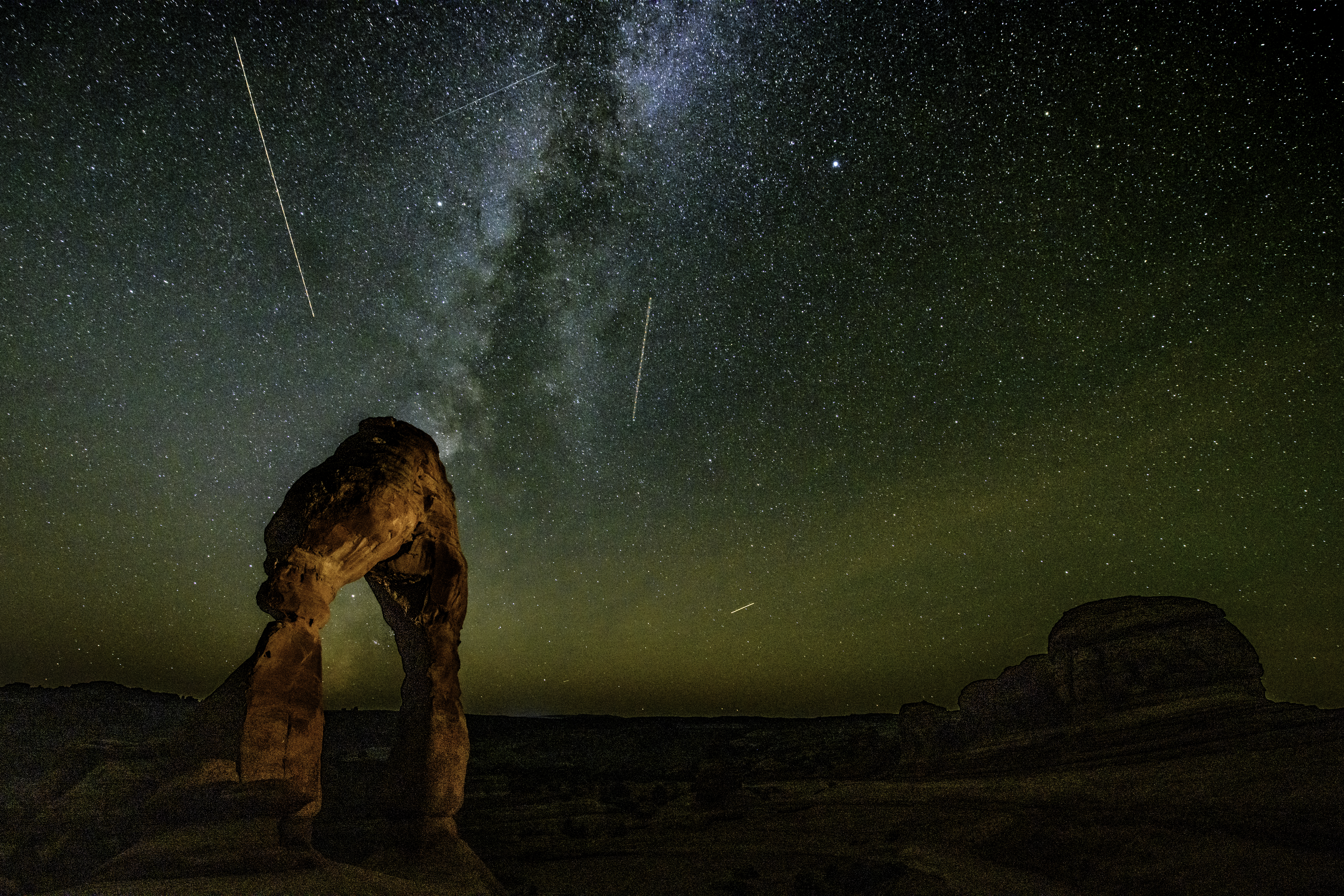